The Duke and Duchess of Cambridge couldn’t keep the smiles from their faces as they arrived for a joint engagement in London today.

Kate, 37, donned a nautical-inspired outfit as she joined William, 36, to launch the inaugural The King’s Cup regatta, which will see the couple go head-to-head in a charity sailing race off the Isle of Wight summer.

The couple, who became an aunt and uncle yesterday when the Duke and Duchess of Sussex welcomed their son, beamed with delight as they greeted young supporters ahead of the event.

The Duchess looked ready to set sail in her jaunty ensemble of a Breton stripe top, high waist blue trousers and a red clutch bag.

Prince William said he is ‘absolutely thrilled’ about the news of his nephew’s birth and that he is looking forward to seeing him in the coming day.

The Duke of Cambridge said he was ‘absolutely thrilled’ about the birth of the Duke and Duchess of Sussex’s son, adding he was ‘looking forward to seeing them in the next few days when things have quietened down’ 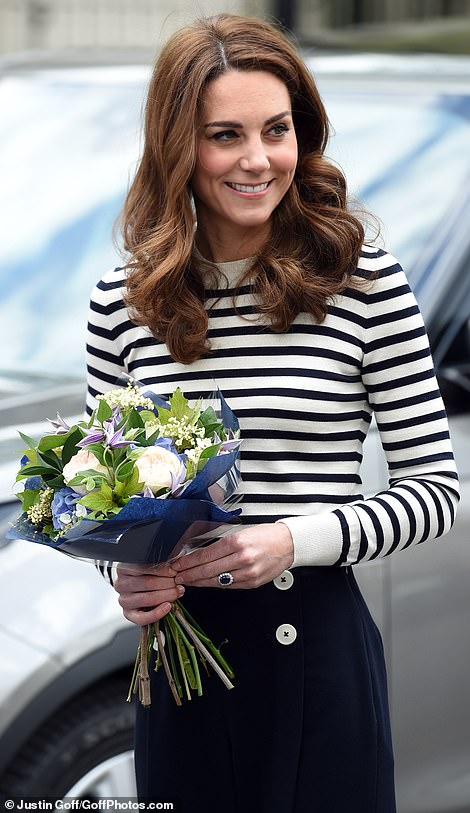 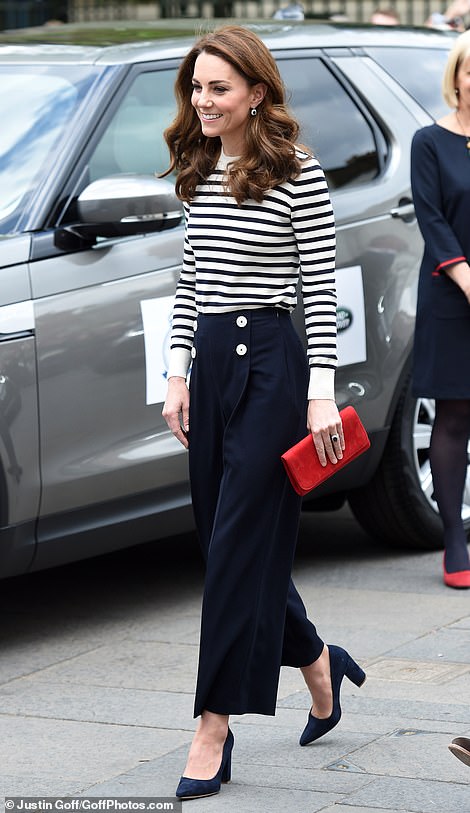 The Duchess looked ready to set sail in her jaunty ensemble of a Breton stripe top, high waist blue trousers and a red clutch bag 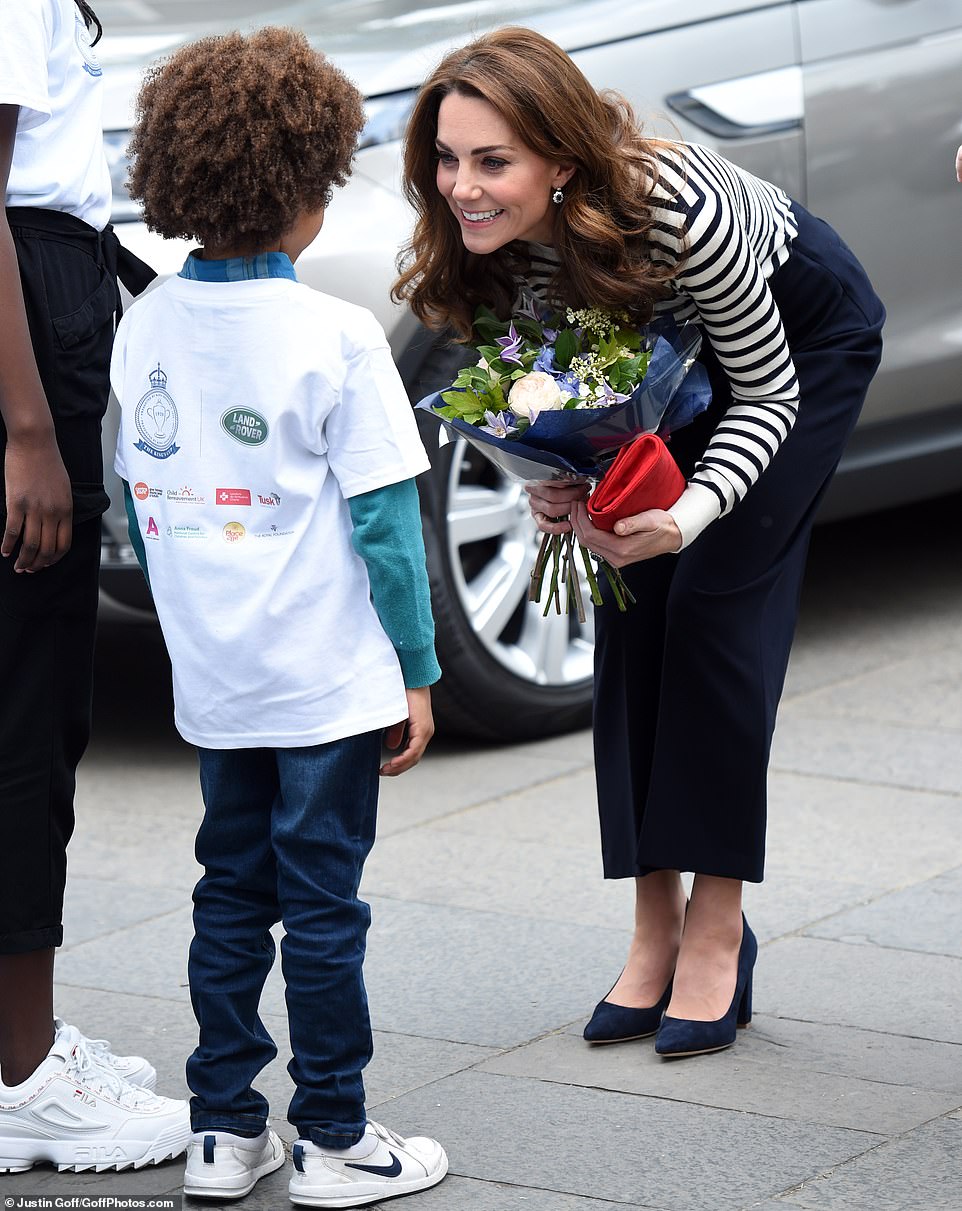 The Duchess of Cambridge received a posy of flowers on her arrival at the Cutty Sark, where she and William launched the inaugural King’s Cup regatta. The couple will go head-to-head in the sailing race off the Isle of Wight this summer

The Duke and Duchess of Cambridge arrived together for the joint engagement, which will see them announce a new sailing race. The couple will go head-to-head at The King’s Cup Regatta off the Isle of Wight in August 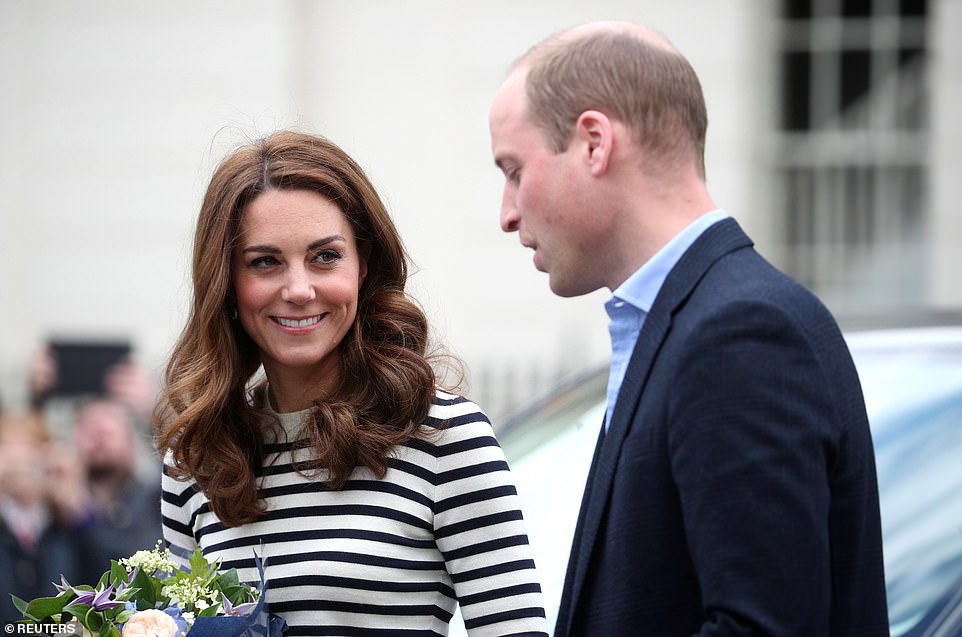 The regatta will be hosted by William and Kate on August 9 on the Isle of Wight, and will see the couple compete as the skippers of rival boats, part of an eight-strong field.

The winning team will be awarded the King’s Cup, a historic trophy first presented by King George V at Cowes’ Royal Yacht Squadron in 1920.

William and Kate hope the King’s Cup will become an annual event, bringing greater awareness to the wider benefits of sport, while also raising support and funds for their causes.

The duke trounced his wife when they competed in a dragon boat race in Canada in 2011, but Kate got her revenge three years later when she won a sailing event in Auckland during their tour of New Zealand. 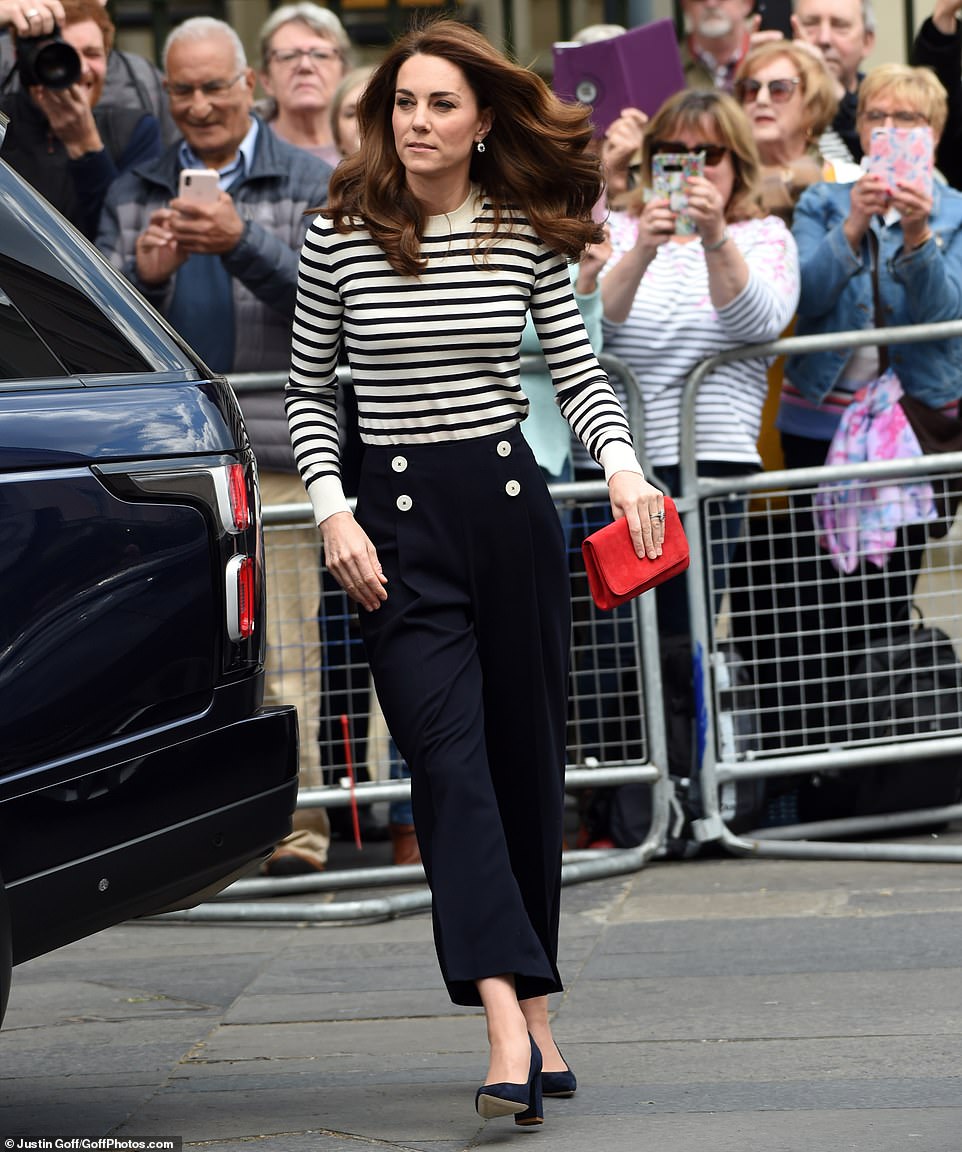 The Duchess of Cambridge looked chic in her blue, white and red ensemble as she arrived at the Cutty Sark in London 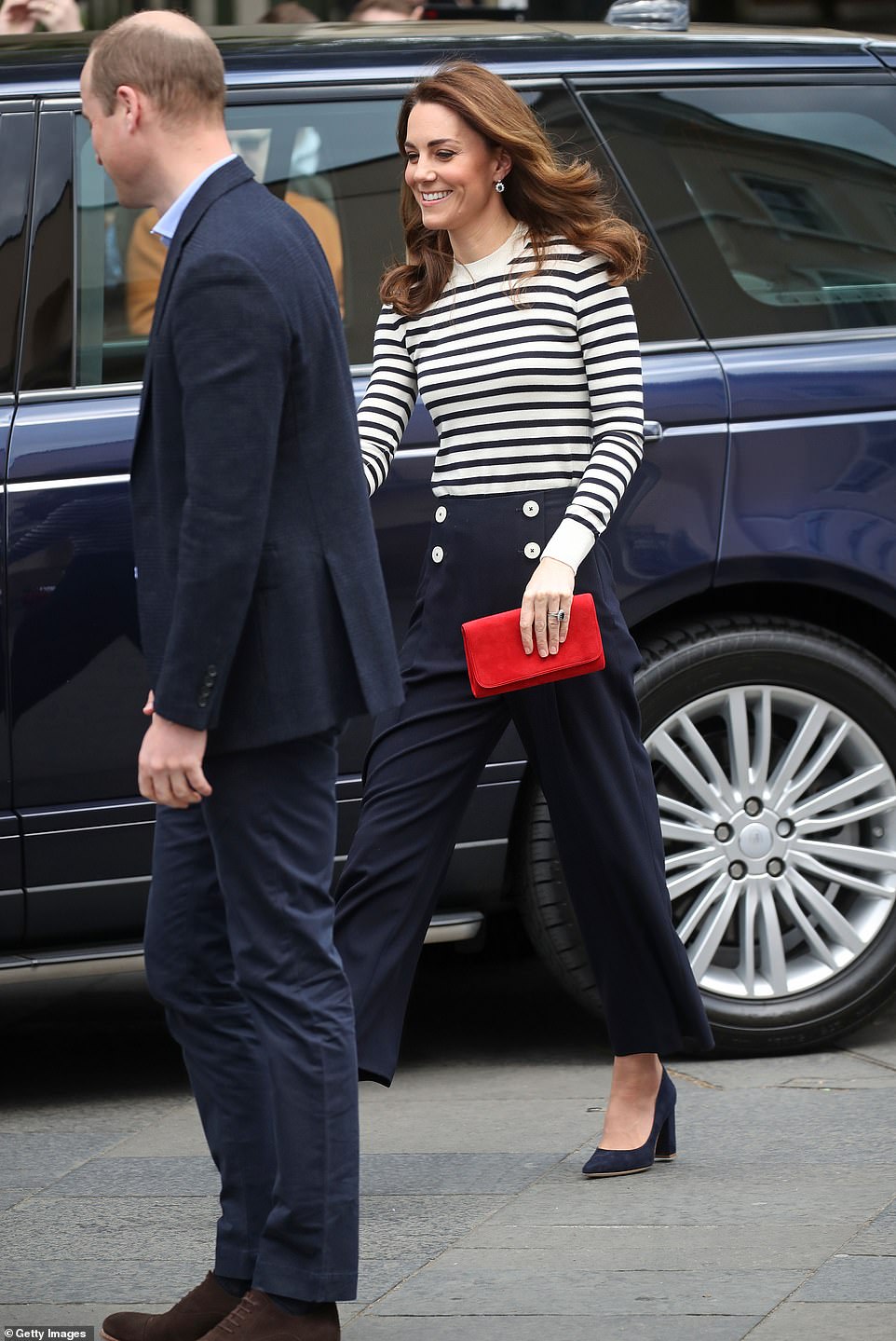 Kate, 37, donned a nautical-inspired outfit as she joined William, 36, to launch the inaugural regatta The King’s Cup regatta, which will see the couple go head-to-head in a charity sailing race off the Isle of Wight summer 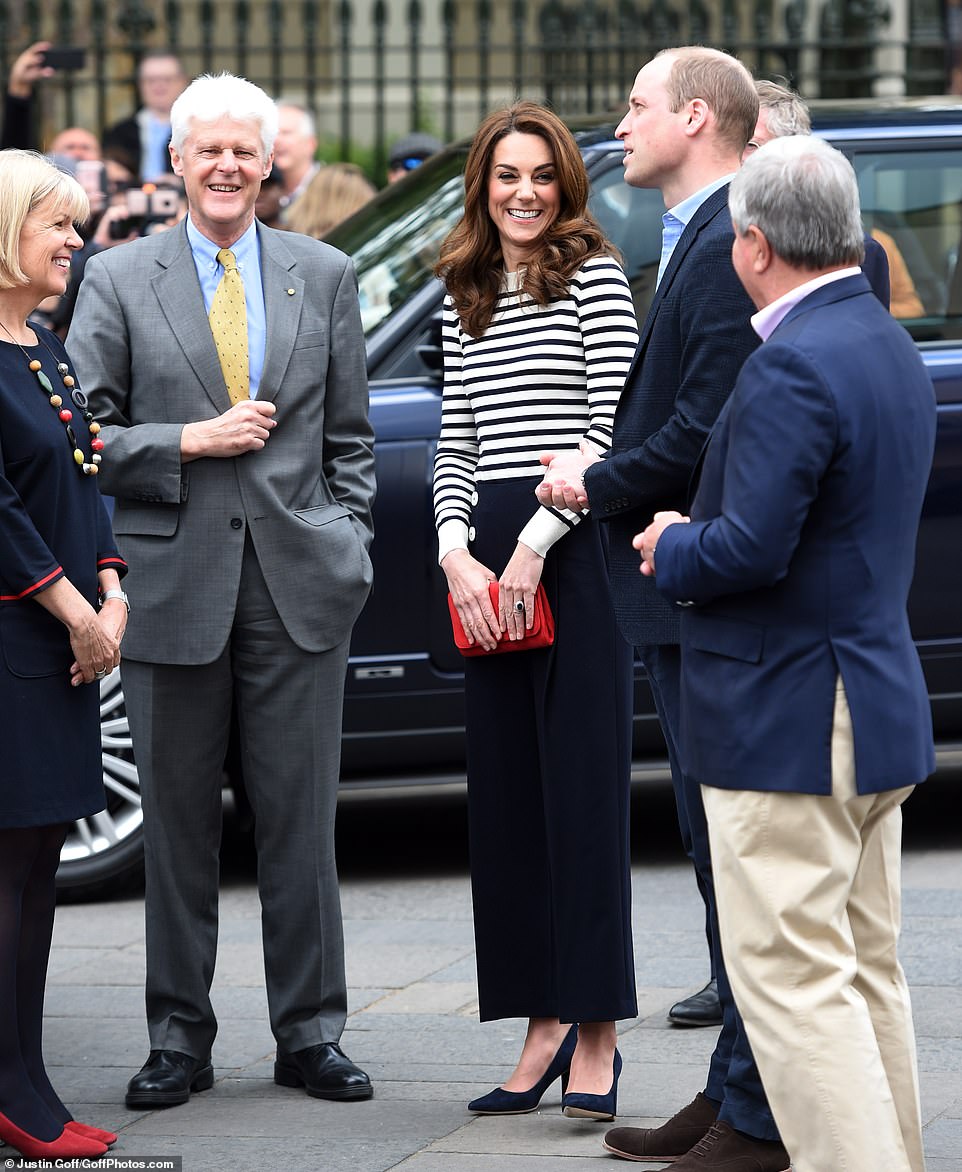 Smiling and laughing, William and Kate shared a light-hearted moment as they arrived at the Cutty Sark on Tuesday afternoon 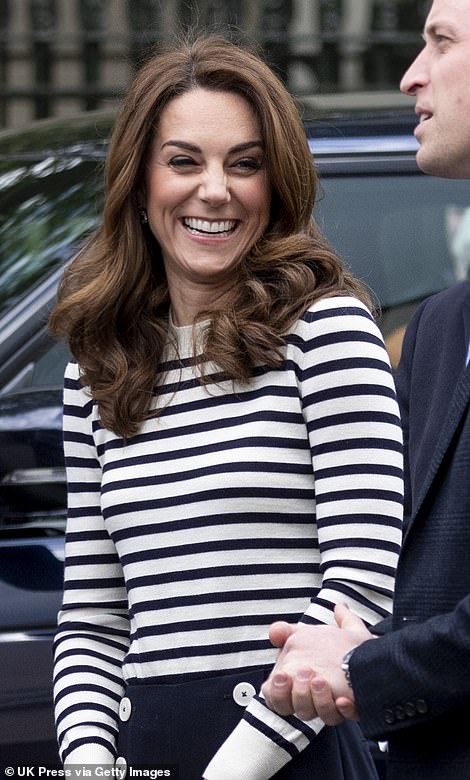 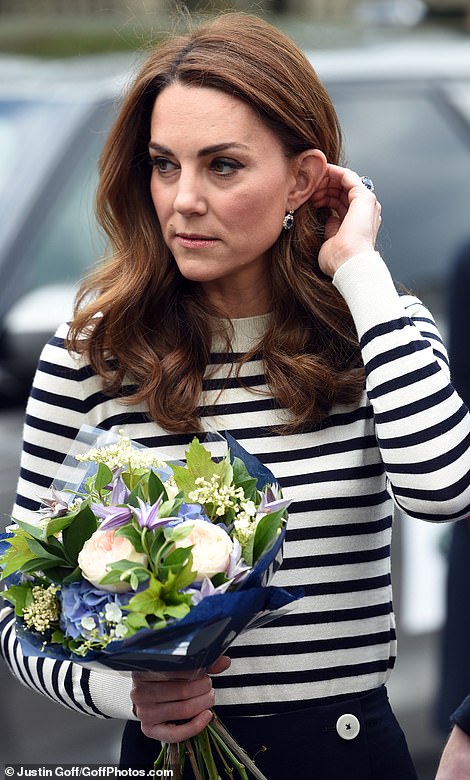 The Duchess of Cambridge wore her brunette locks in big, bouncy curls for the royal outing in London this afternoon 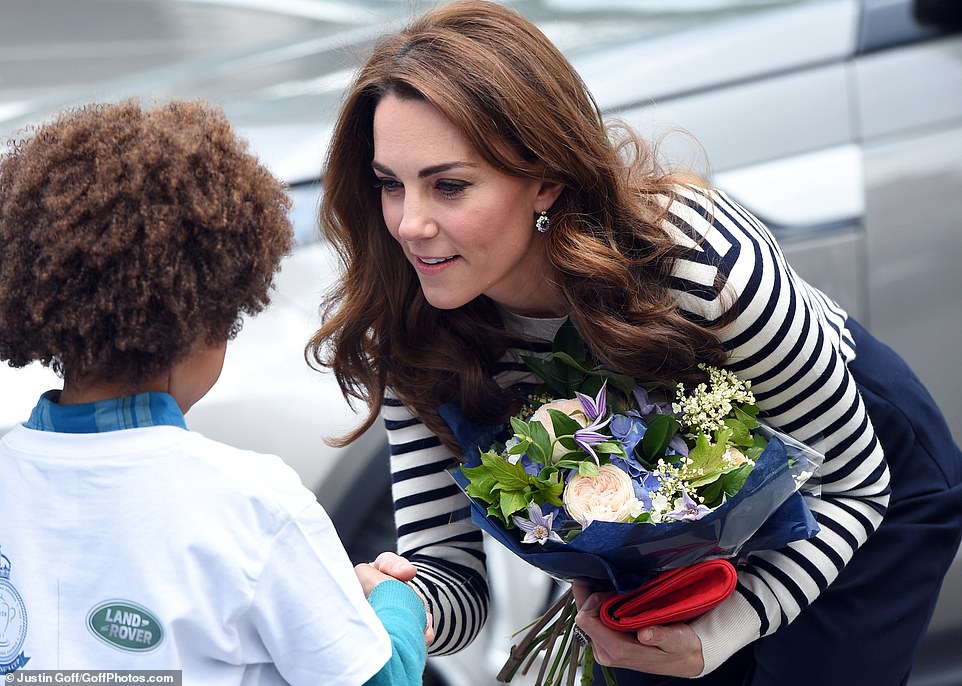 The Duchess of Cambridge received a beautiful bouquet of blue, purple and pale pink flowers as she arrived at the event 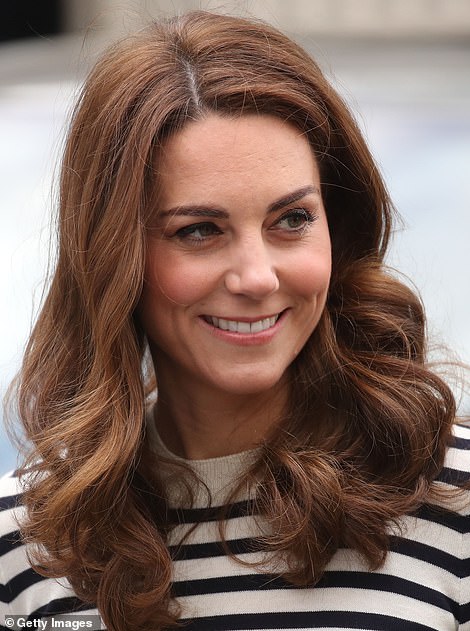 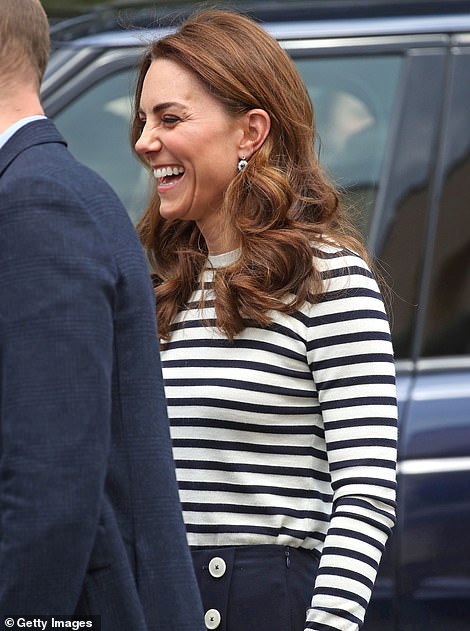 William took the honours again during a visit to the German city of Heidelberg in 2017, when he was victorious in a riverboat race against his wife.

The eight boats taking part in the King’s Cup will each represent one of the charities that are being supported this year by the royal couple.

The duchess will support four of her patronages: Action on Addiction, Place2Be, the Anna Freud National Centre for Children and Families, and The Royal Foundation in connection with her work on the early years development of children.

Members of the public can watch the race from the SailGP Race Village along the Cowes foreshore, which is free to access and will include an 800-seater grandstand.

Footage from the race will play on screens across the town and there will be a number of family-friendly activities and exhibits to promote sailing around the event, including initiatives and programmes for children and young people.