Happy birthday, Camilla! Prince William and Kate Middleton lead sweet royal tributes to the Duchess of Cornwall as she turns 74

Prince William and Kate Middleton led royal tributes to the Duchess of Cornwall on her 74th birthday.

The Kensington Palace Twitter account this morning shared a sweet photograph of Camilla and Prince Charles as they attended a lavish 280-guest soirée raising funds for a conservation charity founded by Camilla’s late brother Mark Shand on Wednesday.

Alongside the snap, the caption read: ‘Wishing The Duchess of Cornwall a very happy birthday today!’ followed by a balloon emoji.

Prince Charles, 72, and Camilla, stepped out at the ‘A Starry Night In The Nilgiri Hills’ hosted by the Elephant Family at Lancaster House in London.

Prince William, Duke of Cambridge and Duchess of Cambridge host a Christmas party for families of military personnel deployed in Cyprus at Kensington Palace on December 4, 2018 in London 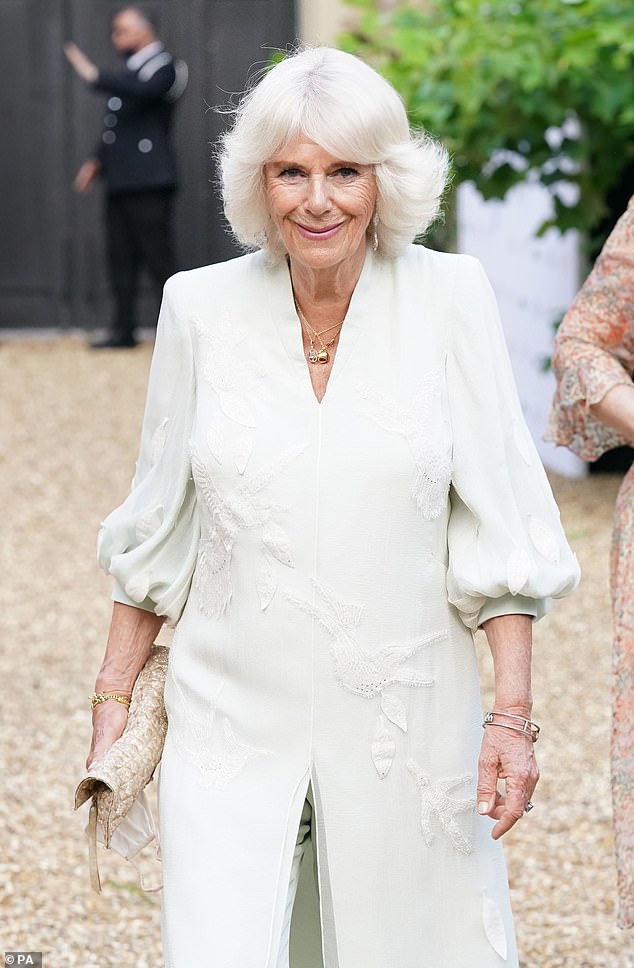 Alongside the snap, the caption read: ‘Wishing The Duchess of Cornwall a very happy birthday today!’ followed by a balloon emoji (pictured)

At the event, the heir to the throne warned that the ‘increasing overlap’ of the human and animal worlds is in part responsible for the rise of ‘deadly zoonotic diseases’ like coronavirus.

Watched by his wife, Prince Charles said: ‘The last year has shown us more than ever the importance of dealing with issues like this.’

Camilla looked effortlessly elegant in a pale green Anna Valentine three quarter-length tunic and trousers for the occasion, which included a performance from Katherine Jenkins.

Camilla accessorised with a woven clutch bag and added a touch more glam with some drop earrings featuring large stones, before completing the look with gold court heels.

It wasn’t long before the duchess was inundated with wellwishes from royal fans across the globe.

‘Wishing the Duchess of Cornwall a very Happy Birthday and all the best,’ wrote one,’ while a second penned: ‘Happy birthday your royal highness…I hope you have a truly wonderful day.’

Last year, Camilla, who has been married to the Prince of Wales for 16 years, spent her birthday with her family at Raymill, her private Wiltshire home.

She spent the day before her 73rd birthday in London, where she paid tribute to the Chelsea Pensioners who lost their lives during the coronavirus pandemic on a visit to their London home.