Prince William hosted the recipients of this year’s Legacy Awards for tea at Kensington Palace today.

The Duke of Cambridge, 37, who was praised by one recipient for encouraging gender equality, looked in high spirits as he shook hands with teenagers at the reception.

The pictures were shared on the Kensington Royal Instagram account alongside the post which read: ‘The Duke of Cambridge hosted the inspirational #2019LegacyAwards recipients from the Diana Awards, for tea at Kensington Palace.’

‘The Legacy Awards celebrate the achievements of 20 outstanding young leaders, visionaries and role models from across the world, aged 12-25, who have demonstrated their ability to inspire and mobilise new generations to serve their communities.’ 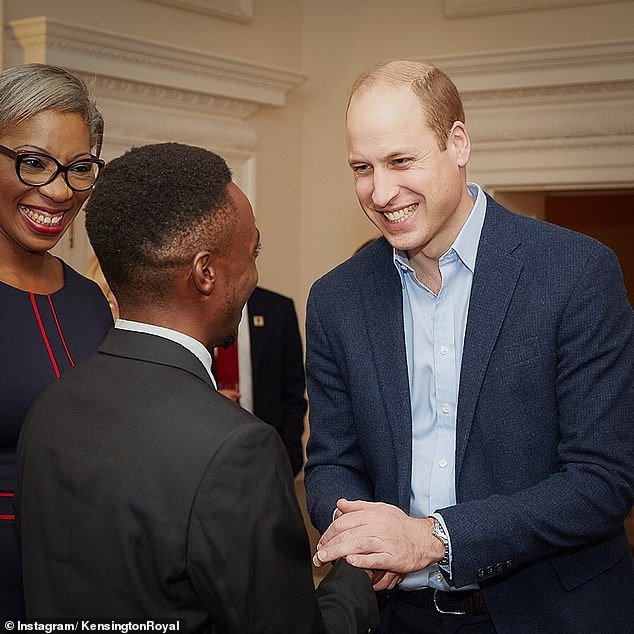 The Duke of Cambridge, 37, looked in high spirits as he congratulated the award winners who were rewarded for their leadership

Celebrating their 20th anniversary this year, the awards honour the memory of Prince William and Prince Harry’s mother the late Lady Diana.

Olivia Hancock, who has been recognised by The Diana Award for her work promoting parity among the sexes in football, paid tribute to William for treating Prince George and Princess Charlotte equally during garden kickabouts.

The 14-year-old was among a group of young winners congratulated by the duke when they visited Kensington Palace ahead of a presentation ceremony on Tuesday.

After meeting the duke, who is president of the Football Association, Ms Hancock described how the future king intervened between his children when sibling rivalry threatened to get the better of them.

Pictures from the event were shared on the Duke and Duchess of Cambridge’s official Instagram account, Kensington Royal

She said: ‘So when I was chatting with Prince William he said to me, when he plays football with George and Charlotte, when Charlotte’s in goal George says to her that “Charlotte I’m better than you.”‘

She said the duke told his son: ”George, Charlotte could be as good as you.’

She added: ‘It’s great to hear that Prince William is saying that to George.’

Ms Hancock went on to say: ‘My message is for every girl to have the same opportunities as boys in football. If boys want to they can dance, for girls they can play football.’

The teenager is among a group of Legacy Award recipients, from across the UK and Commonwealth countries including Canada, Nigeria, Tanzania and India, who have had a significant impact on society.

The Diana Award, which honours the legacy of William’s mother Diana, Princess of Wales, celebrates its 20th anniversary this year. 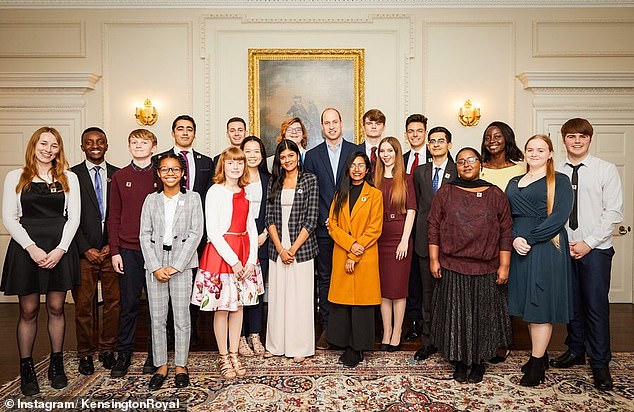 William posed for a picture with this year’s recipients of the Legacy Award as part of the Diana Awards, which honour the legacy of his late mother

Diana’s brother Earl Spencer will present the prestigious awards during a ceremony at the Old Royal Naval College in Greenwich, south-east London.

Among the guests will be Doreen Lawrence, the mother of murdered teenager Stephen Lawrence and now a peer sitting in the Lords, who was part of the judging panel, and James McVey from the band The Vamps.

‘This ceremony is about celebrating young people for their selfless contribution to society, their courage and bravery, and demonstrating to young people that we value them.

‘We believe that valuing young people means investing in them, so we are delighted that our Legacy Award recipients will have access to our unique development programme ensuring they continue to be positive trailblazers for their generation.’