Prince William evoked the memory of his late mother this morning on a visit to a homelessness charity she opened more than 30 years ago.

The Prince of Wales, 40, arrived at Depaul UK in London today to meet with people who receive help from the charity, as well as staff working on its programmes.

He follows in the footsteps of Princess Diana who visited the charity in engagements in 1990, 1993 and 1995. Diana opened the first Depaul Trust Hostel in Willesden in June 1995.

William’s visit comes in the wake of Prince Harry’s attacks on his brother and sister-in-law, Kate in his bombshell memoir, Spare – as the Duke finds himself dragged into a diplomatic row over Iran’s execution of a British-Iranian national.

Despite an almighty fallout from his brother’s memoir, Prince William looked professional as ever on his visit to Depaul UK this morning, following Kate’s first solo outing yesterday since the book was released.

During the visit, he met with people who use the service now or have used it in the past, as well as staff members from employability and education programmes run by the charity.

The duke is patron of Centrepoint homeless charity and in 2020 revealed that he talks to his older children Prince George, now eight, and Princess Charlotte, now seven, about the issue of homelessness.

Speaking to Mary Berry for her Christmas special A Berry Royal Christmas, he said: ‘On the school run already, bear in mind they’re six and four, whenever we see anyone who is sleeping rough on the streets, I talk about it and I point it out and I explain why and they’re all very interested. They’re like: “Why can’t they go home?”‘ 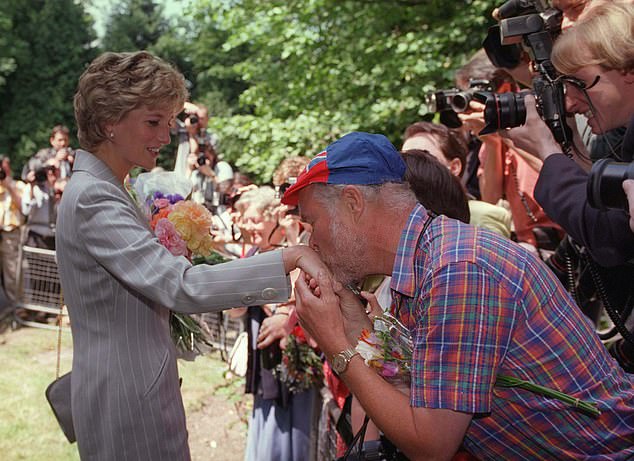 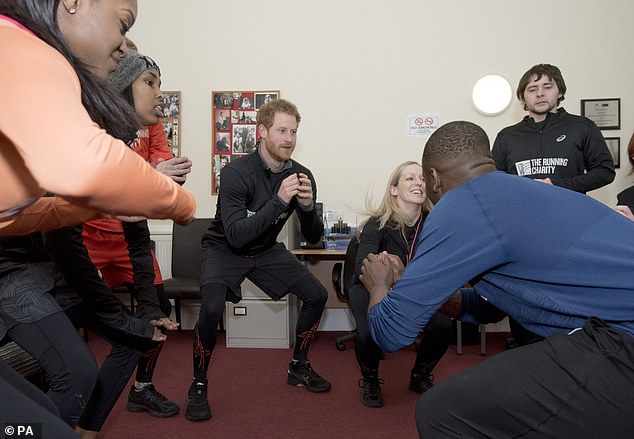 Prince Harry, who has launched a series of scathing attacks on his brother William in his memoir, Spare, and interviews to promote the book, has also held the charity close to his heart (pictured visiting in 2017)

In 2019, the duke became the patron of The Passage, an organisation established in 1980 which has gone on to help more than 135,000 people in crisis through its resource centre, homelessness prevention projects and innovative accommodation services.

Diana first took the royal and his brother the Duke of Sussex to the charity in 1993, when the pair were young boys and William has gone on to make numerous public and private trips to the organisation.

In December 2009, a then-27-year-old Prince William spent a night sleeping rough to understand the plight of the homeless at Christmas.

He arrived shortly before midnight and stayed out in temperatures as low as minus 4C (24F), lying in a central London alleyway surrounded by wheelie bins. 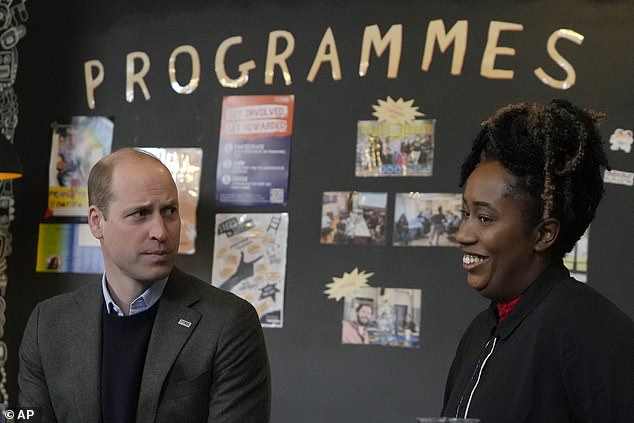 Prince William, who has made homelessness one of his main priorities as a royal, appeared in good spirits today 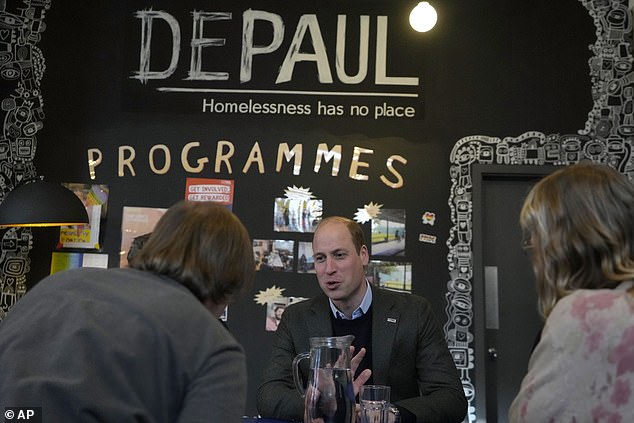 The second in line to the throne was accompanied by his right-hand man at St James’s Palace, former SAS officer Jamie Lowther-Pinkerton, one of the Scotland Yard police protection officers who accompany him everywhere and Seyi Obakin, chief executive of Centrepoint.

Dressed in jeans, trainers, a hooded sweatshirt and beanie hat, he went unrecognised as he laid a piece of cardboard down on the floor and climbed into his sleeping bag.

It wasn’t an altogether new experience for former Army officer William, who has often lived rough on exercises. But it certainly wasn’t a pleasant one, as temperatures plunged, making sleep almost impossible.

After sleeping fitfully, William rolled up his sleeping bag at 6am and walked through the streets for 45 minutes, stopping to talk to several homeless people on the way.

He went to Centrepoint’s hostel in Greek Street, Soho, where he showered before cooking breakfast for some of the residents and cutting a cake to celebrate the charity’s 40th anniversary. 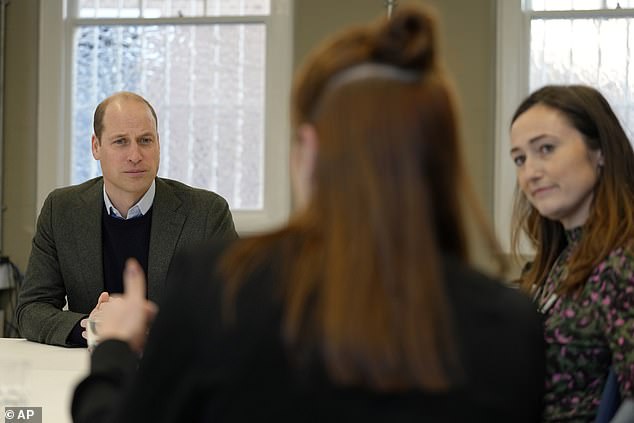 In 2020 revealed that he talks to his older children Prince George, now eight, and Princess Charlotte, now seven, about the issue of homelessness

He was slightly better off than the average rough sleeper, as he was accompanied by his armed personal protection officer, his private secretary – a former SAS officer – and the chief executive of the homelessness charity.

Even the venue, a secluded spot close to Blackfriars Bridge in the City, was carefully chosen for safety.

The Duke said afterwards that the experience had helped to deepen his understanding of life on the streets.

Depaul UK, which operates in London and the South East, Greater Manchester, South Yorkshire and the North East specialises in supporting young people.

Following a claim in his memoir that he killed around 25 Taliban fighters while serving in Afghanistan, the Iranian regime used the comments to justify its hanging of British-Iranian national Alireza Akbari, 61, at the weekend.

Iran’s foreign ministry posted on Twitter that the UK was ‘in no position to preach’ on human rights after Harry’s comments.

Iran murdered Alireza Akbari after he was accused of being an MI6 spy.

‘While all decent people will reject Iran’s lies, many of their supporters will be strengthened by the ayatollahs’ exploitation of the duke’s ill-judged comments.’

Meanwhile the Duke continued his attacks on his family this weekend as he demanded they apologise to his wife, Meghan. 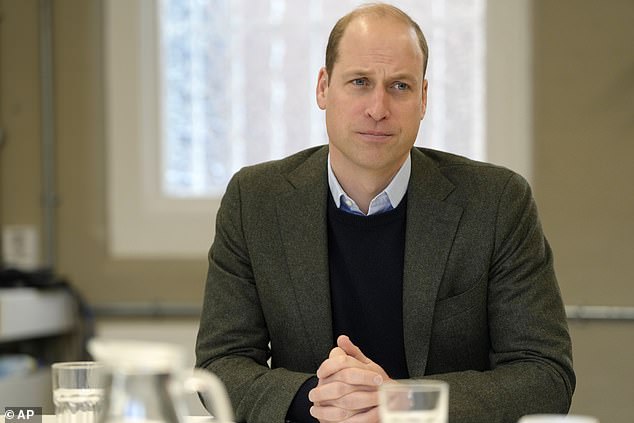 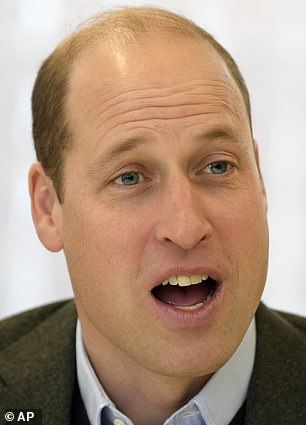 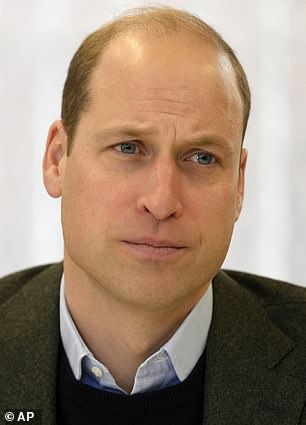 William, 40, is said to be focusing on the issue of homelessness as one of his priorities this year

In an interview with the Telegraph, he sent a message to the royals urging them to ‘come clean’ as he told them: ‘You know what you did.’

Harry also said he wanted to help reform the monarchy so that his niece and nephews, Prince George, Princess Charlotte and Prince Louis would not be affected by the concept of the ‘spare’ in the same way he has been.

After expressing concern that one of the Prince and Princess of Wales’s children may end up also feeling like the ‘spare’, he claimed Prince William had ‘made it very clear that the children are not [Harry’s] responsibility’.

Despite several bombshell claims in his memoir, Harry has also revealed the first draft of the autobiography was twice the length of the final draft, but that he ended up leaving details out for fear that his family would not forgive him.

Talking about his family, he said: ‘I wish you’d actually sit down with me, properly, and instead of saying I’m delusional and paranoid, actually sit down and have a proper conversation about this, because what I’d really like is some accountability. And an apology to my wife.

‘Because you know what you did, and I now know why you did it. And you’ve been caught out, so just come clean, and then we could all move on.’