Prince William pays tribute to the Queen and Prince Philip

Prince William has revealed that he learned the Royal recipe for serving the public from his grandparents, the Queen and Duke of Edinburgh.

Speaking to food writer and TV cook Mary Berry as part of a BBC1 Christmas special, William tells warmly of how the Queen, who came to the throne when she was only 25, defied the challenges of ‘a man’s world’.

‘My grandmother becoming Queen at a very young age, in the days when it was a man’s world, it was very difficult for her to make a difference – and she’s done it in her own very unique, distinct way. And, you know, my grandmother and my grandfather together are the epitome of public service.

Pictured from left to right: The Duke and Duchess of Cambridge, Nadiya Hussain and Mary Berry with their finished Christmas meringue roulades in the winter chalet at the Rosewood London Hotel 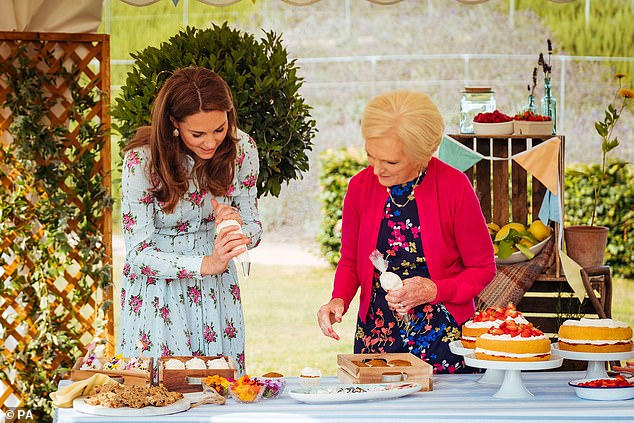 Pictured are the Duchess of Sussex, left, and Mary Berry, right, preparing to pipe icing in images release today. The celebrity cook joined the Duke and Duchess of Cambridge on a number of royal visits for the BBC1 programme A Berry Royal Christmas 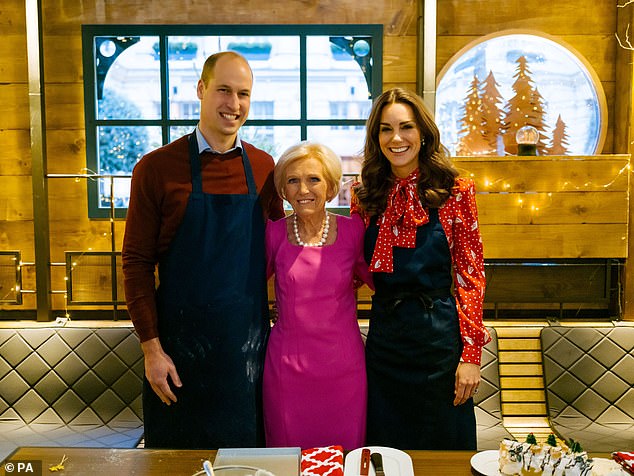 Prince William, left, praised the Queen today, which will provide a welcome boost, after the controversies swirling around Prince Andrew, the most challenging year since the so-called ‘annus horribilis’ of 1992

‘And I personally get a lot out of helping people. I find that you hear and you understand and you learn so much more by giving a bit of your time, a bit of your day, to just be around.’

His praise will provide a welcome boost to the Queen, who has seen controversies swirling around Prince Andrew and the Duke and Duchess of Sussex create her most challenging year since the so-called ‘annus horribilis’ of 1992.

William is equally complimentary about his father, Prince Charles, and his late mother, Princess Diana. Chatting to Ms Berry at the London centre of The Passage, a homeless charity of which he is patron, he says: ‘Growing up, both of my parents were hugely charitable. My father set up the Prince’s Trust. He’s involved in so many different organisations.

‘My mother has done her work with homelessness and Aids and other charities and I think that I’ve grown up in a household which has been very much a case of, “Well, we’re very lucky. You must give back.”’

The BBC special, A Berry Royal Christmas, sees the former Great British Bake Off presenter, who has written more than 75 cookery books, join the Duke and Duchess of Cambridge on several Royal engagements.

As well as the visit to The Passage, she and Kate travel to Liverpool, where they make mocktails at The Brink, the UK’s first dry bar established by the charity Action on Addiction. 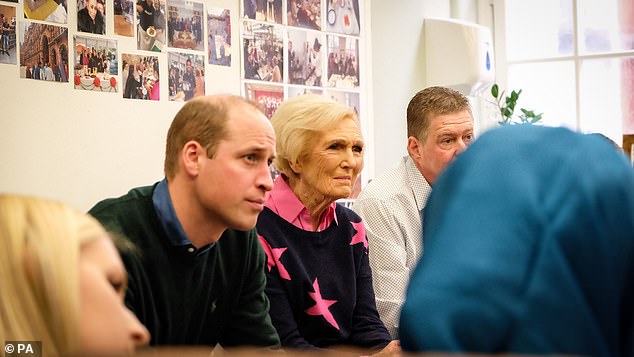 The BBC special, A Berry Royal Christmas, sees the former Great British Bake Off presenter (centre), who has written more than 75 cookery books, join the Duke (left) and Duchess of Cambridge on several Royal engagements. 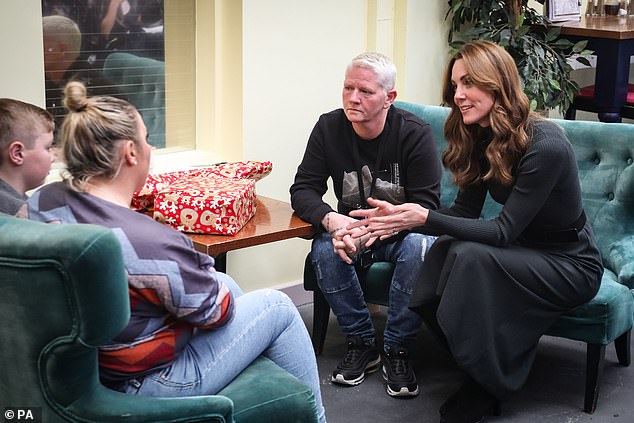 As well as the visit to The Passage, she and Kate (right) travel to Liverpool, where they make mocktails at The Brink, the UK’s first dry bar established by the charity Action on Addiction (pictured)

They then reunite at the Royal Horticultural Society’s garden at Wisley, Surrey, where the Duchess gives the 84-year- old cook a tour of the Back To Nature garden she co-designed for the Chelsea Flower Show.

Ms Berry then gives the Duchess tips on how to ice cupcakes.

The programme culminates with a Christmas party hosted by the Duke and Duchess for charity staff and volunteers who have to work over the festive period. The Royal couple work alongside Ms Berry and Bake Off winner Nadiya Hussain to create roulades decorated with chocolate swirls and miniature Christmas trees.

Ms Berry said: ‘I am honoured the Duke and Duchess invited me to join them on their charity engagements. It was truly special to see the causes so close to their hearts, as well as to hear all about the amazing support these charities provide.’