Prince William wants to return to the NHS as an air ambulance pilot to do his bit in the fight against the deadly coronavirus.

The Duke of Cambridge, who flew as a medic for two years until 2017, has suggested he misses it.

The 37-year-old is understood to have made the confession during a visit to an NHS call centre earlier this month.

The Duke of Cambridge, who flew as a medic for two years until 2017, has privately suggested he misses it 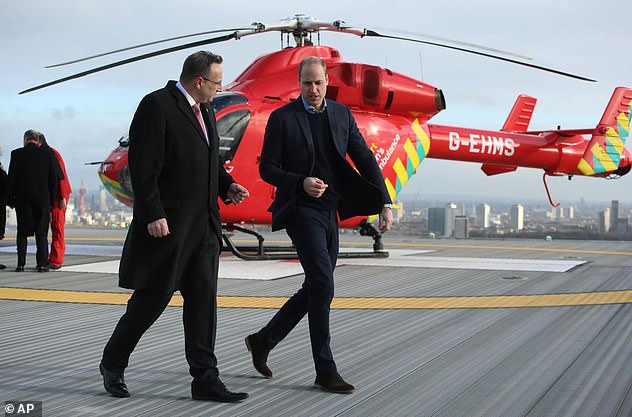 Prince William, 37, earlier this month become the patron of the London Air Ambulance Charity after he was the patron of their 30th anniversary campaign in 2019 (pictured at the Royal London Hospital on January 9, 2019)

A source told the Sun: ‘William has been seriously considering returning as an air ambulance pilot to help in the current pandemic.

‘He knows the whole country is doing its bit and he wants to help. But it’s complicated as he was originally grounded from the job so that he could become a senior working royal.

‘That role is even more important now given that Charles has been ill, Harry has walked away with Meghan and Andrew has been effectively barred from public life. But William is very keen to do anything he can to help.’

The Prince is seeing out the coronavirus crisis at Anmer Hall on the Sandringham estate in Norfolk with his wife Kate, 38, and children George, Charlotte and Louis.

His father Prince Charles was today let out of self-isolation, one week after being diagnosed with coronavirus. 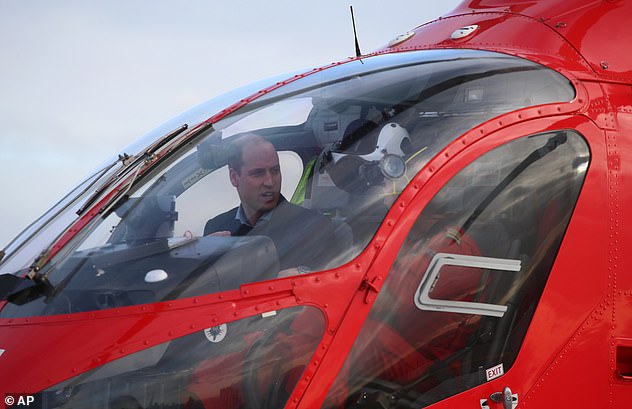 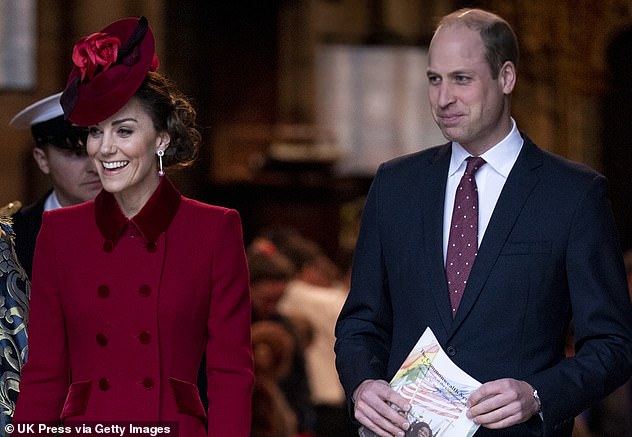 The Prince is seeing out the coronavirus crisis at Anmer Hall on the Sandringham estate in Norfolk with his wife Kate (pictured together on March 9), 38, and children George, Charlotte and Louis

Earlier this month, William became the patron of the London Air Ambulance Charity, which was established in 1989, and provides rapid emergency care in the capital.

He worked as a pilot for the East Anglian Air Ambulance for 18 months between 2015 and 2017, before stepping down to take on more Royal roles on behalf of the Queen.

This could be the problem for the Prince as his tight schedule may make it hard for him to take on further responsibilities.

But the source claimed if he was to reprise his role, he is currently in the right place to do it in Norfolk.

As patron of the London Air Ambulance Charity, the Duke of Cambridge is set to champion the important work carried out by the group. 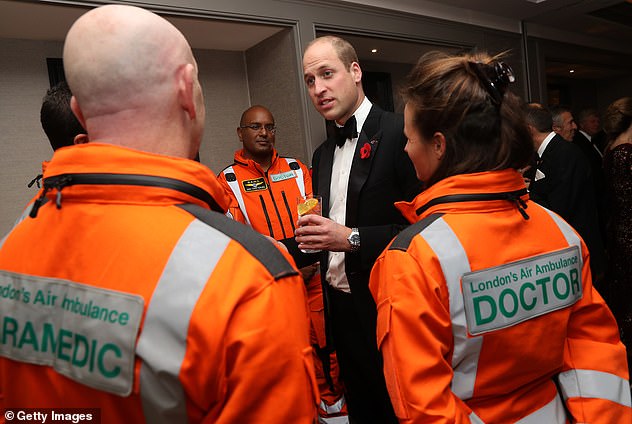 William attended the charity’s gala in November 2019, were he seemed in great spirits (pictured) 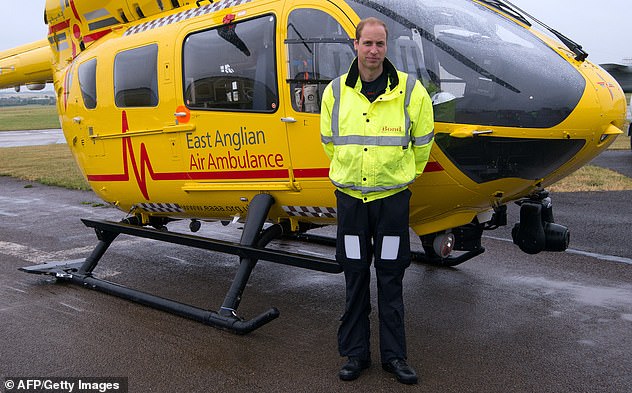 A statement from Kensington Palace, the Prince’s official residence, read: ‘His Royal Highness has seen first-hand the impact these first responders have upon the lives of patients with critical injuries.

Last year, the father-of-three was patron of London Air Ambulance’s 30th anniversary campaign for the duration of 2019.

In January 2019, he visited the Royal London Hospital in Whitechapel, where he met with clinicians, paramedics, pilots and crew members and piloted the helicopter the London Air Ambulance kept there on stand-by.

In November of the same year, he attended the charity’s gala, and was hailed ‘one of their own’ by the staff in attendance. 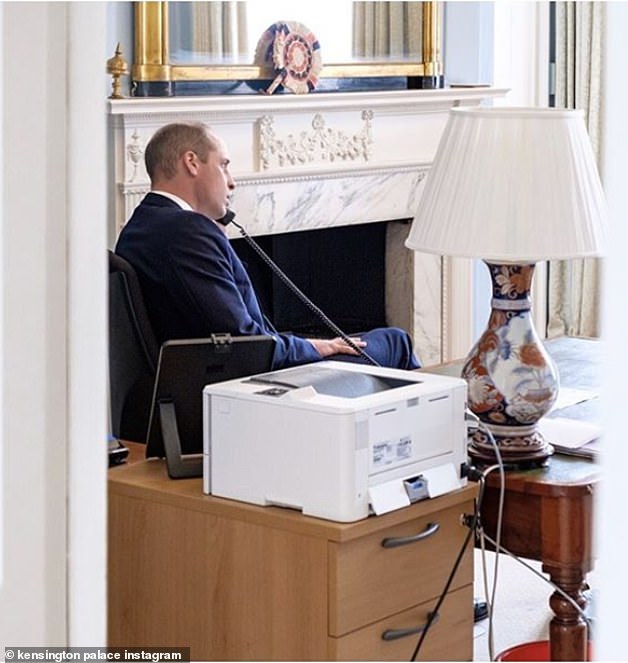 ‘The Duke truly understands our work and knows that every second counts in an emergency.’

He added: ‘We know that with his help as well as the continued support of the public, our crews can reach those who need them most – serving the people of London 24 hours a day, every day of the year.’

William took up a position as pilot for the East Anglian Air Ambulance service in July 2015, and worked there until his last shift in 2017.

He left the role to spend more time in London when his children started school, and take on more royal duties to support the Queen.

In a statement at the time, issued on his behalf by Kensington Palace, he said it was a ‘privilege’ to fly with the organisation.

The Duke and Duchess of Cambridge have already weighing in to help those affected by the coronavirus.

On Saturday they said they were launching a £5million scheme with the charity Mind to support the nation’s mental health at a time of high anxiety during the lockdown.

They urge people to follow guidance from Public Health England by using video calls to keep in touch with family and friends, sticking to regular routines and focusing on favourite hobbies or learning something new.

The Cambridges’ intervention is part of a Government initiative that will see £5million awarded to mental health charities to expand support services.

They wrote: ‘Self-isolation and social distancing can pose huge challenges to our mental health — in recent weeks The Duke and Duchess of Cambridge have been in regular contact with organisations and patronages to understand the issues they are facing during this difficult time.’

Mind is one of a consortium of charities preparing to adapt and increase their services during the lockdown.

Prince Charles is out of self-isolation: Palace confirms future king, 71, is in ‘good health’ after recovering from coronavirus and out of government-advised week-long quarantine

Prince Charles was today allowed out of self-isolation one week after being diagnosed with coronavirus and is in ‘good health’, royal aides have said.

The 71-year-old Prince of Wales had a ‘mild’ form of the illness which first saw him feel unwell two weekends ago before flying to Birkhall in Aberdeenshire.

The heir-to-the-throne had begun to feel ill on March 21 at his Highgrove estate in Gloucestershire before travelling up to Scotland the following day.

His wife Camilla, Duchess of Cornwall tested negative for the infection and is without any symptoms, but will stay in self-isolation until the end of the week. 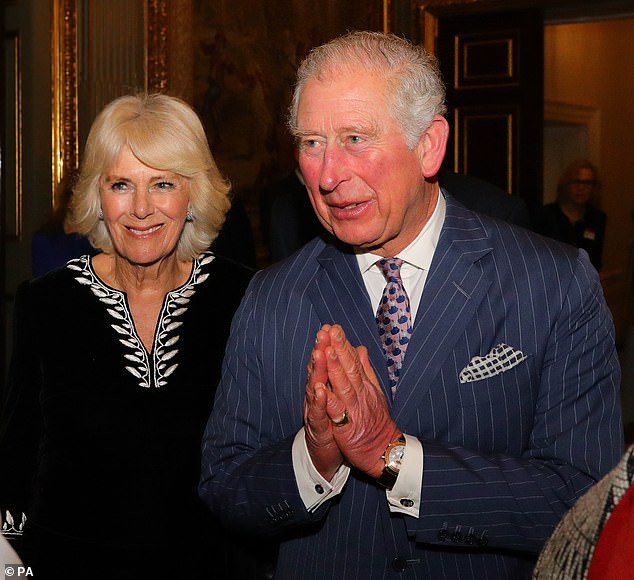 Prince Charles and Camilla, Duchess of Cornwall greet guests during the Commonwealth Reception at Marlborough House in London on Commonwealth Day on March 9

The couple have been staying at Birkhall, their Scottish retreat on the Balmoral estate, and Charles was tested by the NHS on Monday of last week.

His self-isolation lasted seven days based on government and medical guidelines, and he will continue to be able to hold meetings and go for exercise.

A Clarence House spokesman said: ‘Clarence House has confirmed today that, having consulted with his doctor, the Prince of Wales is now out of self-isolation.’

Meanwhile it emerged yesterday that one of the Queen’s footmen has tested positive for coronavirus, sparking further fears for the monarch’s health.

However Buckingham Palace insisted again that the 93-year-old Queen was in good health and that every precaution was being taken. 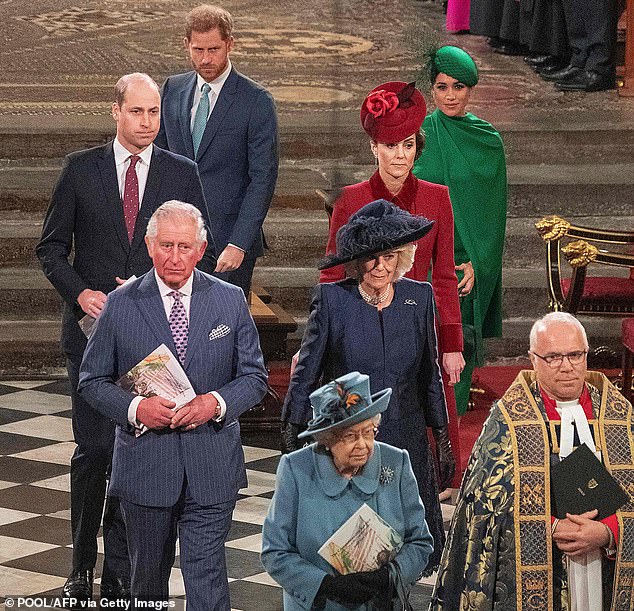 It is understood the staff member’s duties included walking the Queen’s dogs, corgi-dachshund crosses Candy and Vulcan, and bringing her food.

What is the government advice for people with virus symptoms?

Both of these duties would have brought the pair into close proximity. It is not known, however, when they fell sick.

The footman is now self-isolating, according to The Sun on Sunday. The Queen is at Windsor Castle with the Duke of Edinburgh, where they arrived on March 19.

Charles last saw his mother on March 12 for a meeting at Buckingham Palace. Doctors say the earliest he could have become contagious was the next day.

The footman was promoted to a role closer to the Queen six months ago and worked in her private apartments at Buckingham Palace.

A source was quoted as saying: ‘Everyone is terrified, not just for themselves but also for the Queen and the duke.’

Last week, a member of the Scottish Parliament expressed surprise that the Prince was tested for Covid-19 on the NHS.

Joan McAlpine, SNP MSP for the South of Scotland, wished him a speedy recovery but added: ‘Given that his symptoms are said to be mild, like many I wonder how he was tested when many NHS and social care workers cannot get tested.

‘My nephew, who has serious asthma and a chest infection was recently refused a test.’

Royal sources insisted, however, that both Charles and Camilla met ‘local criteria for testing’.

The NHS Scotland website says people will only generally be tested for Covid-19 if they ‘have a serious illness that requires admission to hospital’. 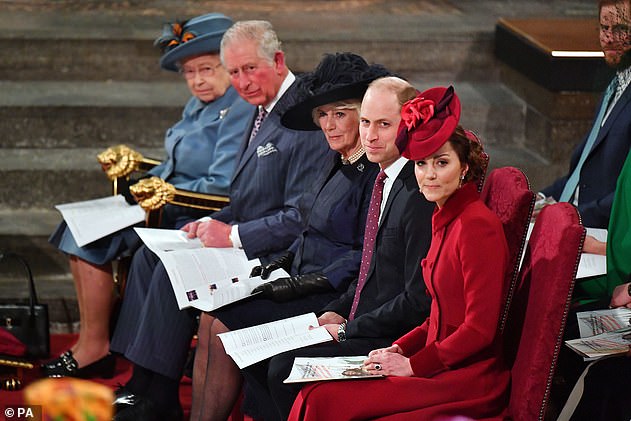 (From left) The Queen, Charles, Camilla, William and Kate at Westminster Abbey on March 9 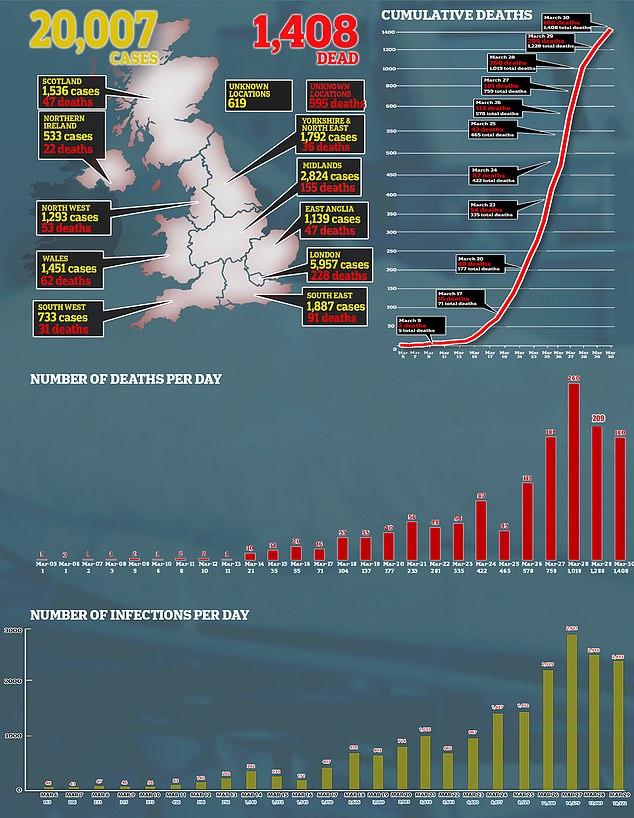 She said: ‘My understanding is there were very good reasons for that person and his wife to be tested, and obviously I wouldn’t be able to disclose anything else that I know because of patient confidentiality.’

Footage of Charles joining the nation in applauding the country’s health workers last Friday, while still suffering from the virus, was posted on Clarence House’s official Instagram account.

Clarence House, Charles’s official London office, is currently closed down as a result of the virus lockdown, with staff working from home.

Charles has had a packed public schedule, including the Commonwealth Day Service at Westminster Abbey on March 9, where he was with Boris Johnson and his pregnant partner Carrie Symonds, and other senior royals, including the Queen. 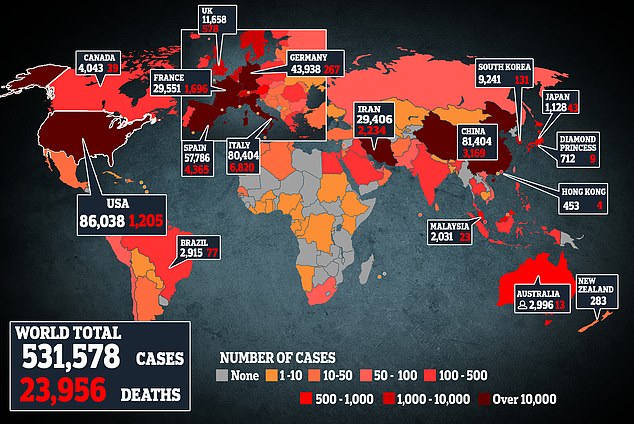 Mr Johnson has also since tested positive for coronavirus, although this was nearly three weeks after their meeting.

On March 10, Charles attended a round table conference with Prince Albert of Monaco, who subsequently revealed he had tested positive for Covid-19.

That week Charles also met celebrities including Ant and Dec and Ronnie Wood at a major Prince’s Trust Event, held an investiture at Buckingham Palace, and attended a charity dinner with Lord Archer and his wife, Dame Mary.

On March 13, the prince went to stay at Highgrove, where he was visited by the Duchess of Cornwall, who has a home, Raymill, nearby, and held private meetings with staff, organisations and tenants.