Princess Beatrice beat the cold with a £695 coat as she stepped out in London last week in her first appearance since the period of royal mourning for the Queen ended.

In a newly released snap taken last Tuesday, the Queen’s granddaughter was seen out in London wearing a jacket with balloon sleeves.

It appeared to have been seemingly inspired by the type of outfits worn by Fergie in the 1980s, an area known for its flamboyant shoulder pads.

Bea’s £695 tan wool felt jacket was created by Ulla Johnson, an American whose designs are worn by Hollywood stars including Katie Holmes and Naomi Watts.

The princess, 34, who has a one-year-old daughter, Sienna, has had an image over-haul in the past few years.

She and her sister Princess Eugenie were previously mocked for their fashion sense.

Bea replaced the black she’s been wearing since her grandmother’s death with a £695 tan wool felt coat designed by Ulla Johnson.

Beatrice paired the statement jacket with a black dress and muted dark accessories. 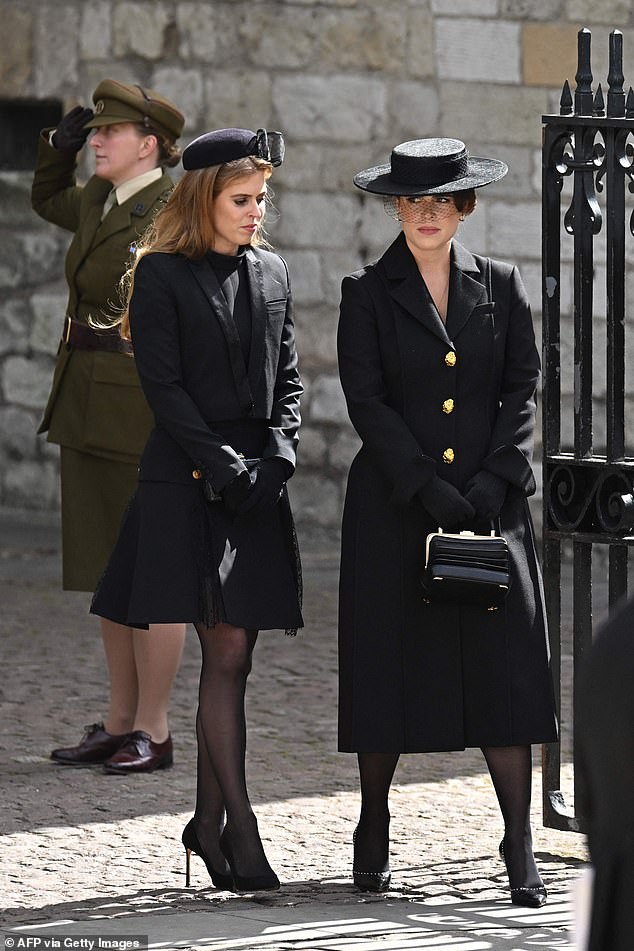 Beatrice looked emotional as she joined her family to say goodbye to the Queen at Westminster Abbey, before the Committal Service at St George’s Chapel, in Windsor

Her appearance comes ahead of her mother, the Duchess of York’s birthday. She is turning 63 next week and she seems to have one birthday present in the bag already.

Her daughter clutched a colourfully wrapped gift as she was seen out and about.

The outing came days before she attended the  Lady Garden Foundation Ladies Lunch.

The eldest daughter of Prince Andrew and Sarah Ferguson was beaming in an understated black and green ensemble. 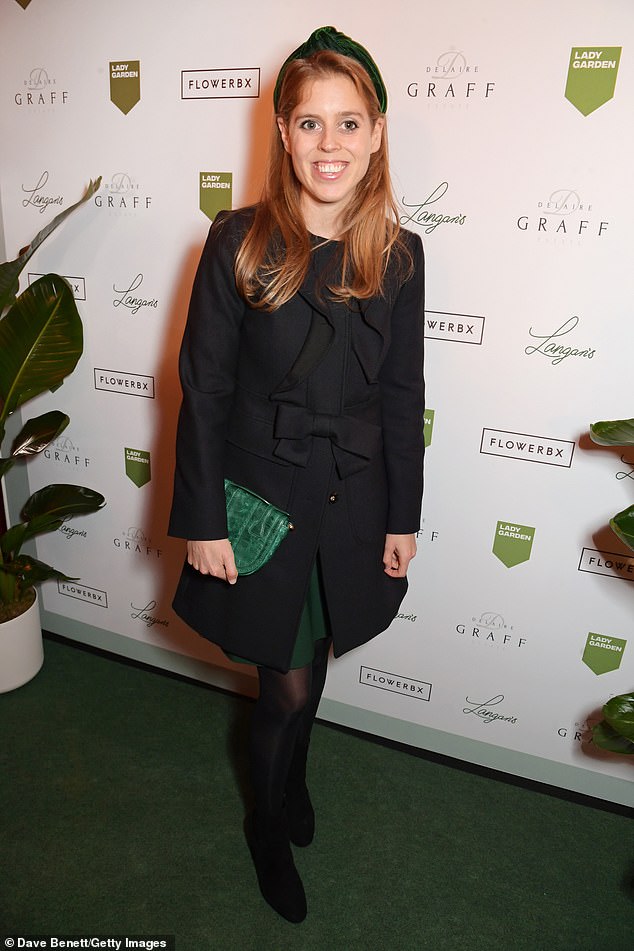 The mother-of-two opted for a black coat with two large bows on the front, over the top of a dark green dress.

Beatrice looked enthusiastic at the lunch event, where she sported natural makeup with a dash of bronzer and mascara, a sculpted brow and a nude lip. 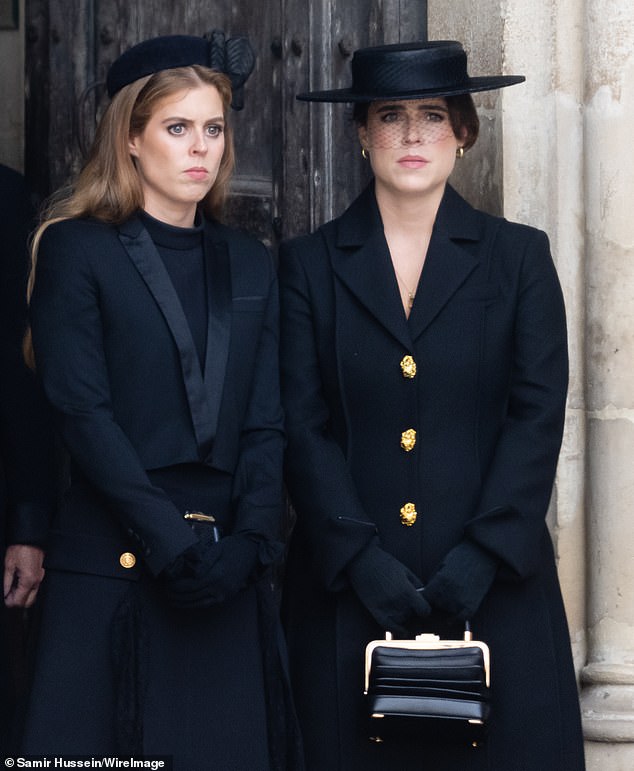 Beatrice is pictured here with her younger sister Princess Eugenie, 32, during the state funeral of Queen Elizabeth II 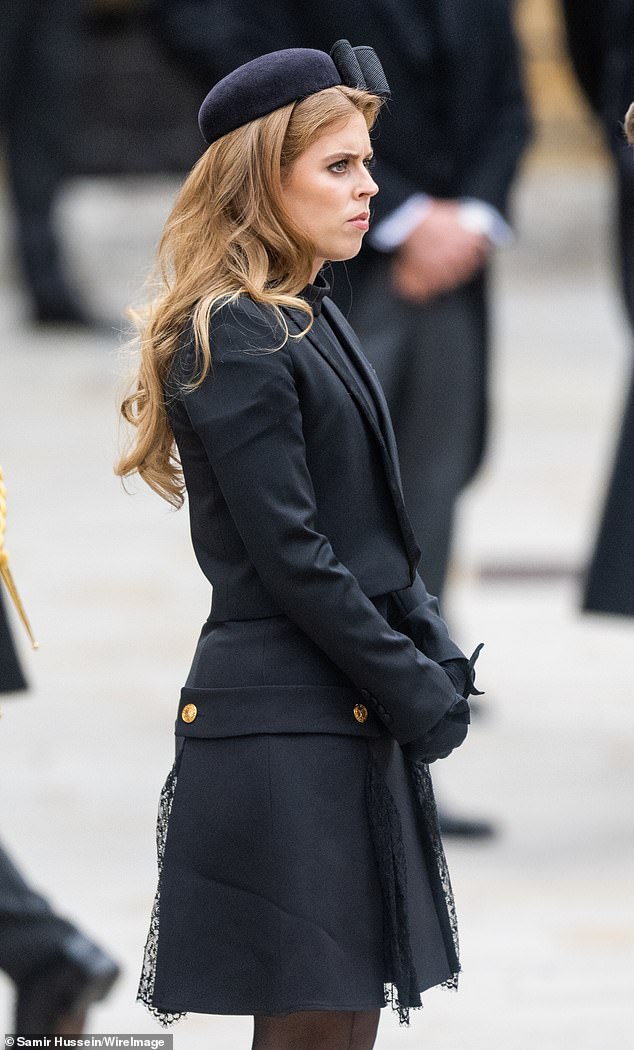 The photograph marked Princess Beatrice’s first public outing following her grandmother’s funeral. She is pictured here at Westminster Abbey ahead of the Queen’s funeral on 19th September

The Princess of York has supported the charity in the past by running for the organisation under the number ‘552’, at the 2017 Hyde Park event for The Lady Garden.

The royals officially came out of mourning on Tuesday, breaking their seven-day period of mourning.

Princess Beatrice was seen at the Queen’s funeral where she was comforted by her husband Edoardo Mapelli Mozzi.

Beatrice looked emotional as she joined her family to say goodbye to the Queen at Westminster Abbey, before the Committal Service at St George’s Chapel, in Windsor.

Following the Committal Service, Beatrice, Fergie and Edoardo were photographed walking away, presumably to the nearby Royal Lodge where the Duke and Duchess of York live, despite being divorced.

In a touching moment, Edo reached out his hand and placed it on his wife’s lower back in a gesture of support.

Beatrice and Eugenie were known to be incredibly close to their grandmother, Her late Majesty, and have been spotted looking emotional in public since she passed away on 8 September.