Princess Beatrice looked resplendent in pearls last night as she relied on a royal favourite dress to attend a charity dinner for children living in war zones.

Beatrice, 34, looked chic in a Self Portrait blazer dress she had previously worn to attend a vigil in memory of her late grandmother Queen Elizabeth II. The £420 Self-Portrait dress was also worn by the Princess of Wales last week as she attended the Festival of Remembrance at the Royal Albert Hall and has been spotted on Zara Tindall and Lady Louise Windsor.

The daughter of Prince Andrew and Sarah Ferguson accessorised her evening look with a pearled headband, adding a touch of glamour to the outfit. 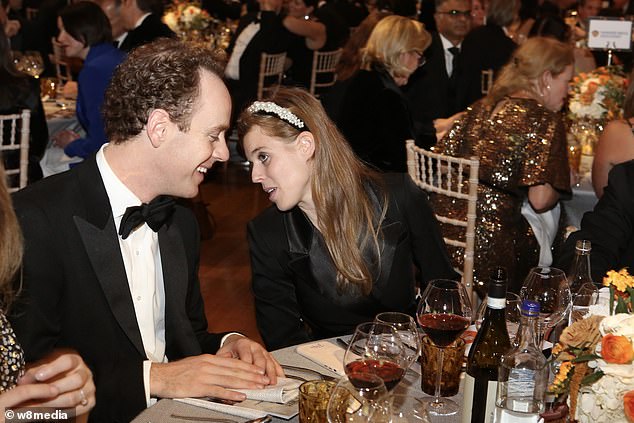 Complete with a black silk lapel and an elegant slim belt, the dress, also loved by the Princess of Wales, is designed to look like two separates – with a smart tailored blazer sewn over a pleated midi skirt with lace trim.

While attending the event for the charity, of which she is an ambassador, mother-of-one Beatrice chatted to the guests on her table.

She was also in the company of American activist Erin Brockovich at the Street Child event.

The fundraiser, which brings in hundreds of thousands of pounds for the charity every year, heard from 13-year-old Marsha, who is from the de-occupied territory of Kyiv Oblast in Ukraine and was forced to flee to Germany earlier this year after Russia’s invasion. 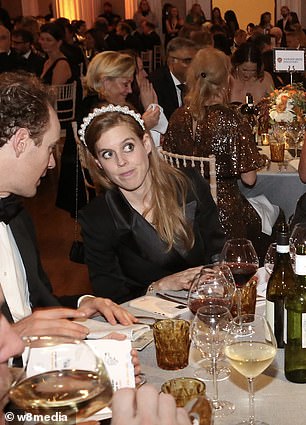 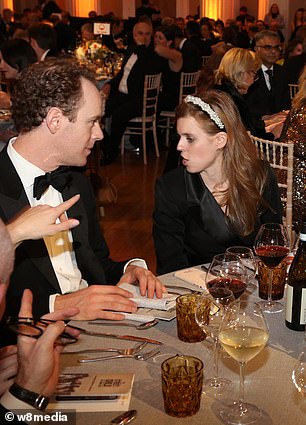 The Princess appeared deep in conversation with the boxer as they attended the event for the charity, of which she is an ambassador 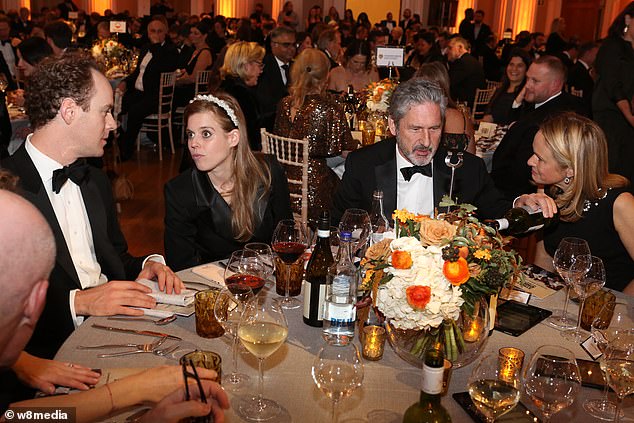 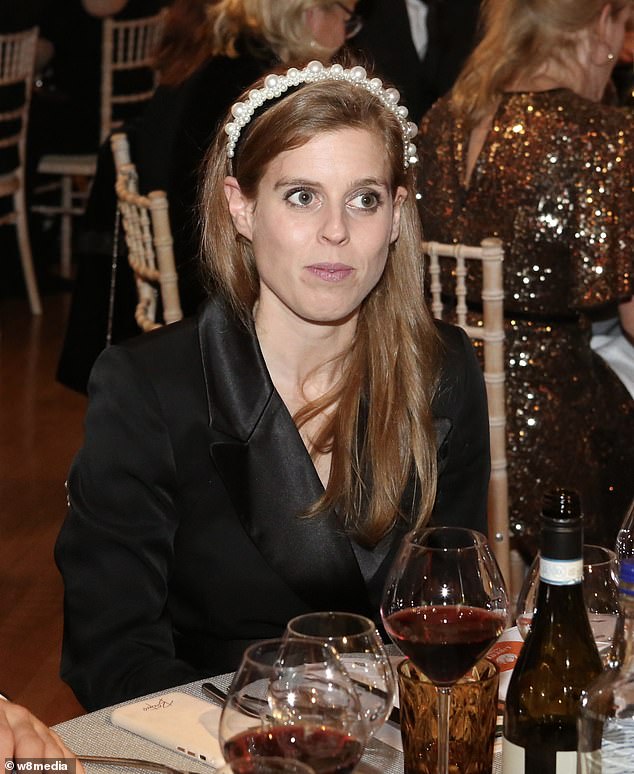 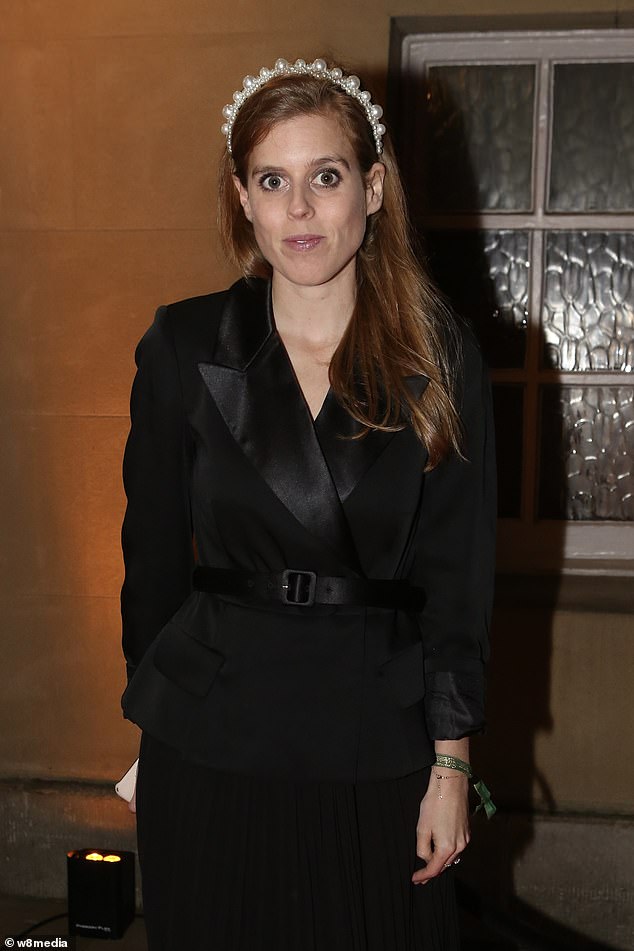 Although Marsha has returned to her home town, her life has not been the same and she lives in constant fear of missile attacks near her home.

As well as supporting children in Ukraine the charity also provides funding to other conflict zones, including Somalia and other African countries and parts of Asia.

Street Child focuses on keeping children safe in their education despite the horrors going on around them.

Princess Beatrice became an ambassador of Street Child UK in 2018 when the charity merged with Children in Crisis, an organisation founded by Beatrice’s mother Fergie.

Before this, the princess was an ambassador of Children in Crisis and she spent three years working for the organisation after graduating from University. 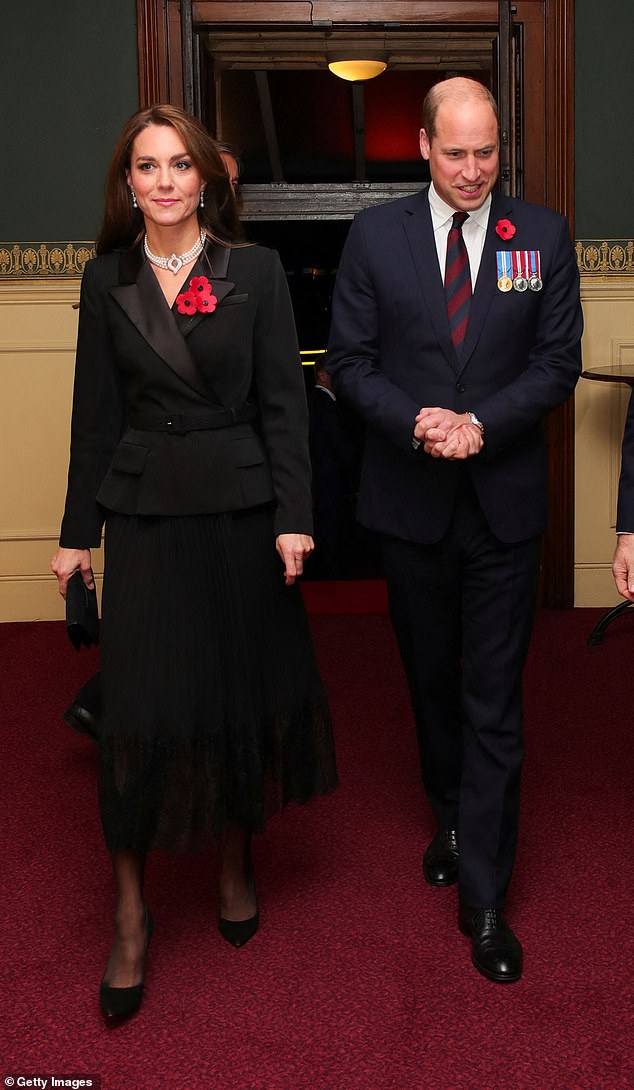 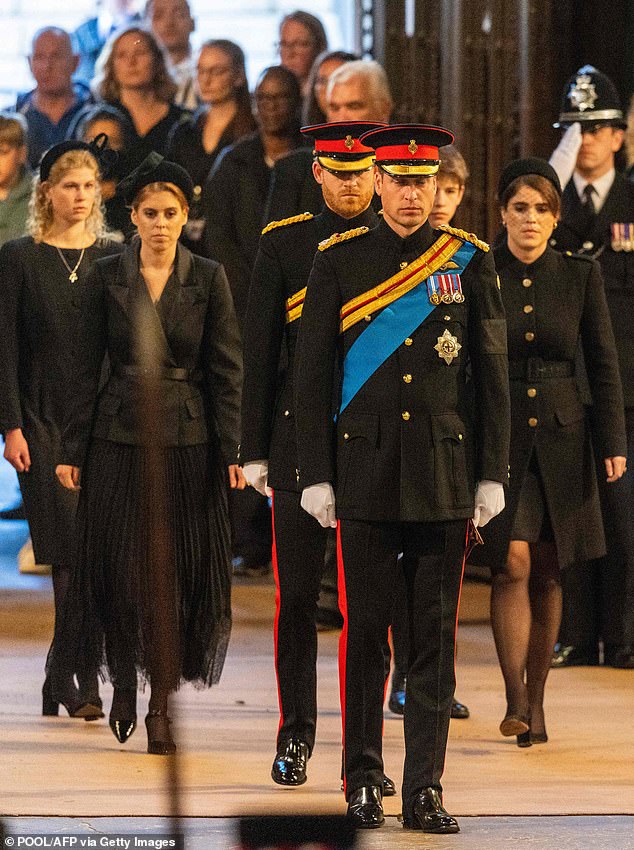 At last night’s event, Street Child’s CEO and founder Tom Dannatt said: ‘Emergency situations, such as the conflict in Ukraine and Somalia, are the scenarios in which Street Child specialise.

‘We are able to offer life-saving humanitarian aid within days and support communities to ensure access to learning is reinstated as quickly as possible.

‘Our Christmas campaign this year showcases the number of children who will be spending their winter in a conflict zone and the Annual Gala dinner is a powerful launchpad for this campaign.

‘It’s brilliant to celebrate our impact to date but to also showcase the ongoing need for further education in emergencies funding.’

The ultimate regal dress! Trendy £420 Self-Portrait frock is a hit with the Princess of Wales, Princess Beatrice and Princess Madeline of Sweden (and even Kate has it in two colours)

As members of the Royal Family, the Princess of Wales and Princess Beatrice have access to some of the most exclusive designers in the world.

But that doesn’t mean they feel the need to splash out on every single item in their wardrobe.

As eagle-eyed fashion fans have recently noticed, there’s a (somewhat) affordable high street brand that the two royal women have been wearing repeatedly since last year.

The Princess of Wales, 40, wore Self-Portrait’s £420 black blazer dress for the Festival of Remembrance at the Royal Albert Hall on Saturday night.

Complete with a black silk lapel and an elegant slim belt, the dress is designed to look like two separates – with a smart tailored blazer sewn over a pleated midi skirt with lace trim. 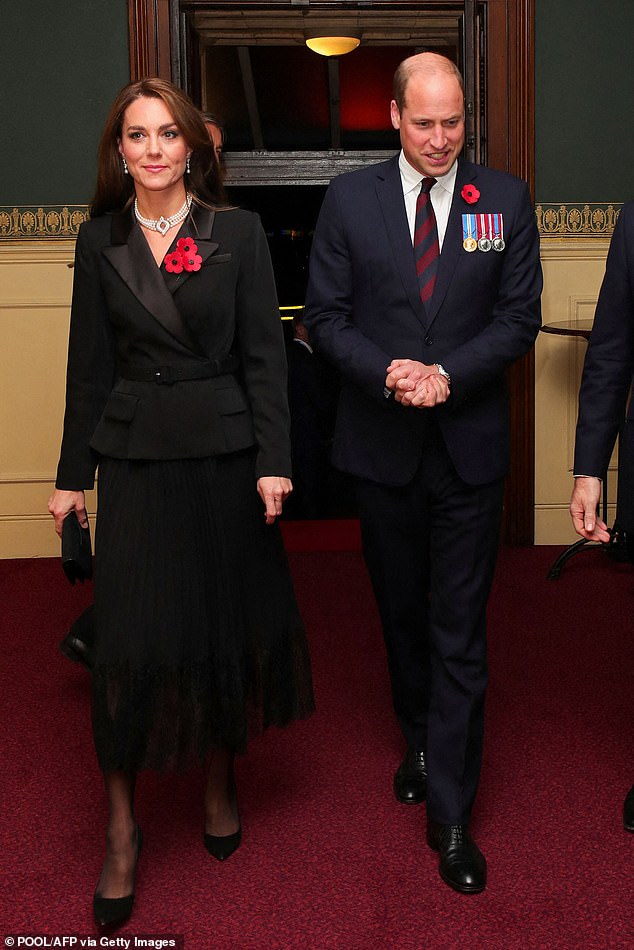 The Princess of Wales pictured at the Royal British Legion Festival of Remembrance at the Royal Albert Hall on November 12, 2022. The mother-of-three opted for a £420 Self-Portrait dress for the occasion 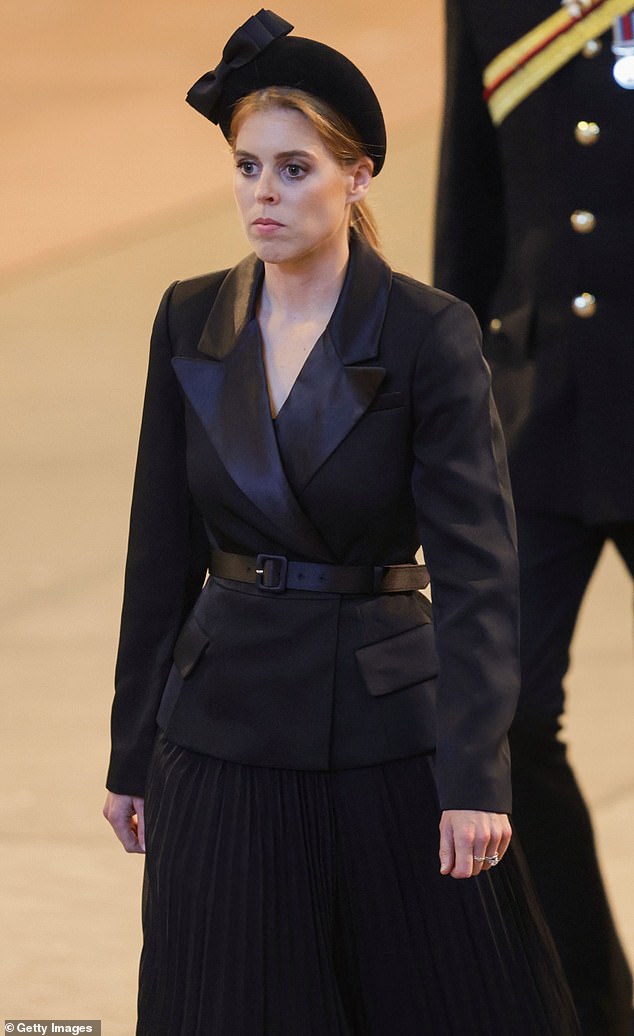 Princess Beatrice wore the same dress to hold a vigil next to her grandmother’s coffin at Westminister Hall on September 17, 2022 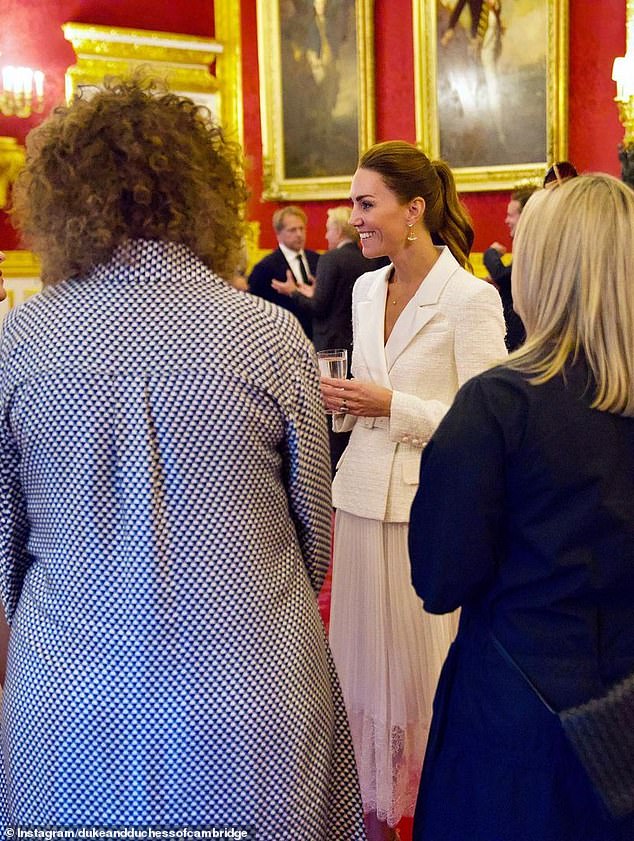 For the sombre occasion, the mother-of-three accessorised the high-street dress with a pair of sheer tights, black heels and a matching clutch bag.

However, the frock has also been worn by Princess Beatrice, when she held a vigil with Zara Tindall, Princess Eugenie and Lady Louise Windsor for her late grandmother in September.

Standing beside Her Majesty’s coffin at Westminster Hall, Beatrice, 34, paired the Self-Portrait dress with a black suede headband topped with a bow and patent leather heels.

That said, both women – who own the dress in cream too – have worn the multipurpose frock in happier times as well. 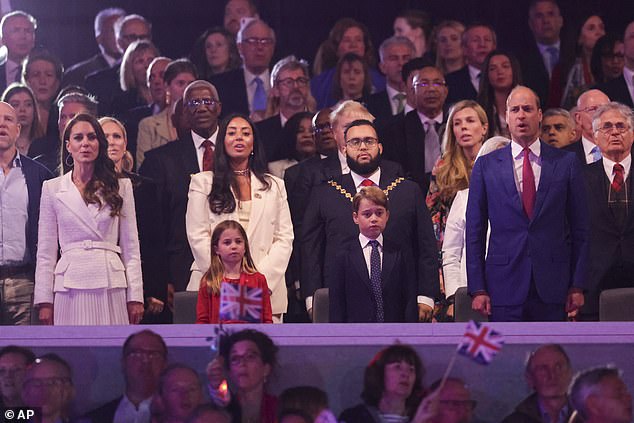 The then Duchess of Cambridge wore the dress again for the Party at the Palace televised event for the Platinum Jubilee on June 4, 2022 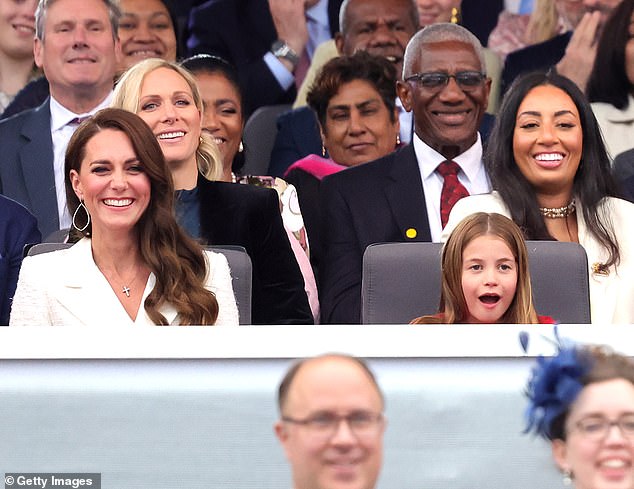 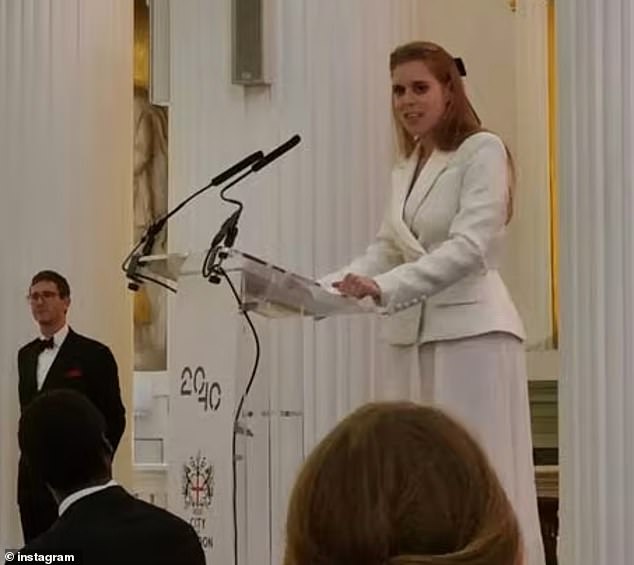 In September 2021, Kate wore the cream dress publicly for the first time when she held a reception for those who helped organise her Hold Still photography initiative at Buckingham Palace.

For this occasion, the mother-of-three styled her brown hair in a high ponytail and was photographed happily speaking to guests in her high street lace frock.

And for the Queen’s Platinum Jubilee celebrations in June, the then Duchess of Cambridge chose the cream dress for Party at the Palace televised event in front of Buckingham Palace.

Keeping her accessories minimal, Kate instead opted for her signature bouncy blow-dry and wore a pair of circular silver earrings as she took her seat in the front row next to Princess Charlotte. 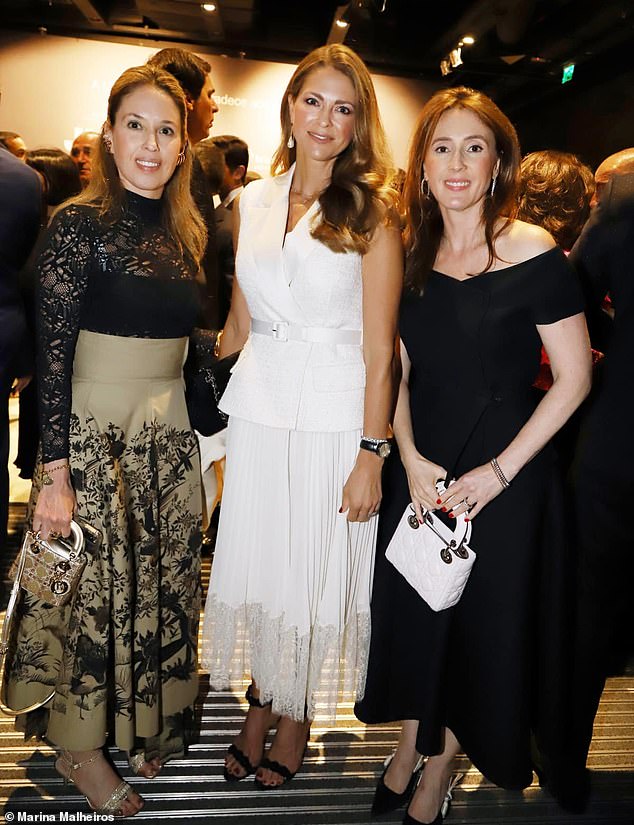 Princess Madeleine of Sweden (centre) was pictured wearing a sleeveless version of the cream dress at a Childhood foundation event in Sao Paulo, Brazil earlier this month.

Shortly before the Queen passed away in September, Princess Beatrice was spotted wearing the cream version of the dress while delivering a speech at the 2022 Annual Summit dinner at Mansion House – which sent royal fans into a frenzy.

Meanwhile, Princess Madeleine of Sweden was pictured wearing a sleeveless version of the cream dress at a Childhood foundation event in Sao Paulo, Brazil earlier this month.

The stylish royal, 40, paired her high street frock with some black heeled sandals for the occasion. 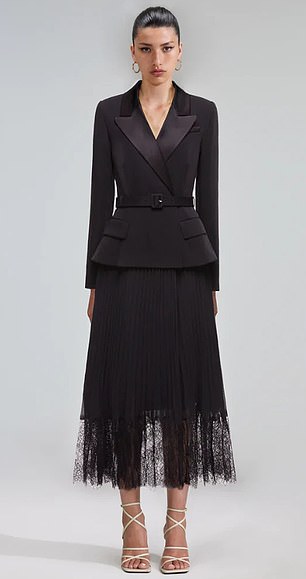 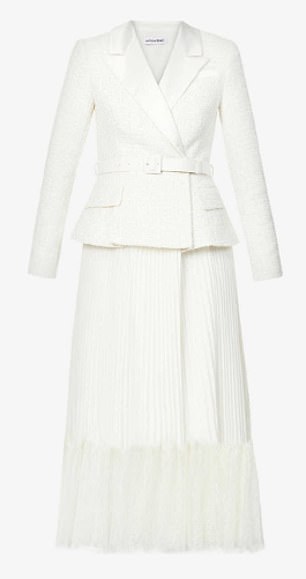 The £420 dress is available in black and white. The black version has a silk lapel while the cream has a boucle jacket

‘It’s a good message to young girls that princesses wear £300 dresses to big events. It makes me proud.’

Suggesting why the dress has been such a hit with the royals, Amanda said: ‘The dress itself is a fun mix between elegance, sophistication, business casual on the top and then fun on the bottom with this little lace detail.’

And it’s not the first time that the Princess of Wales and Beatrice have twinned with their outfits. 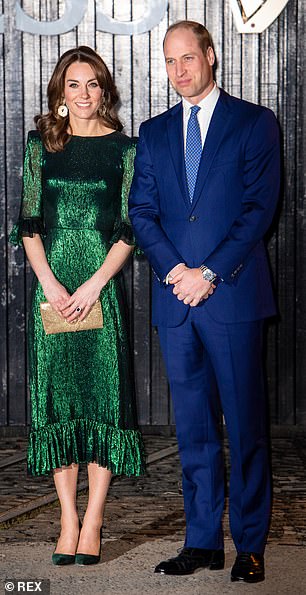 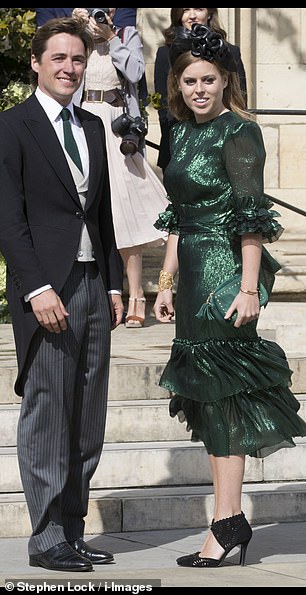 And it’s not the first time Kate and Beatrice have twinned in an outfit! Both have worn a version of The Vampire’s Wife The Veneration dress (pictured left, Kate Middleton in the gown, and right, Princess Beatrice at Ellie Goulding’s wedding)

Princess Beatrice wore a £1,695 ‘The Veneration’ tiered silk-blend lamé dress by The Vampire’s Wife to Ellie Goulding’s nuptials at York Minster Cathedral in 2019.

Kate wore a very similar version of the emerald gown as she stepped out when she joined Prince William for an evening reception at the Guinness Storehouse in Dublin at the start of 2020.