Princess Charlene of Monaco on the front row at Versace

Princess Charlene of Monaco proved herself to be more than a match for the models at Milan Fashion Week on Friday, when she put on an incredibly stylish display while attending Versace’s star-studded show.

The 39-year-old royal attended the catwalk event wearing a dazzling silver dress by the design label, which hugged every curve, and showed off her trim figure.

Daring cut-outs across the stomach also allowed Charlene to subtly put some skin on show, while still managing to maintain a chic appearance.

Front row favorite: Princess Charlene of Monaco put on a very stylish display as she sat on the front row at Versace’s Milan Fashion Week show

Cheeky: The 39-year-old royal flashed some skin through the quirky cut-outs at the front of her silver dress 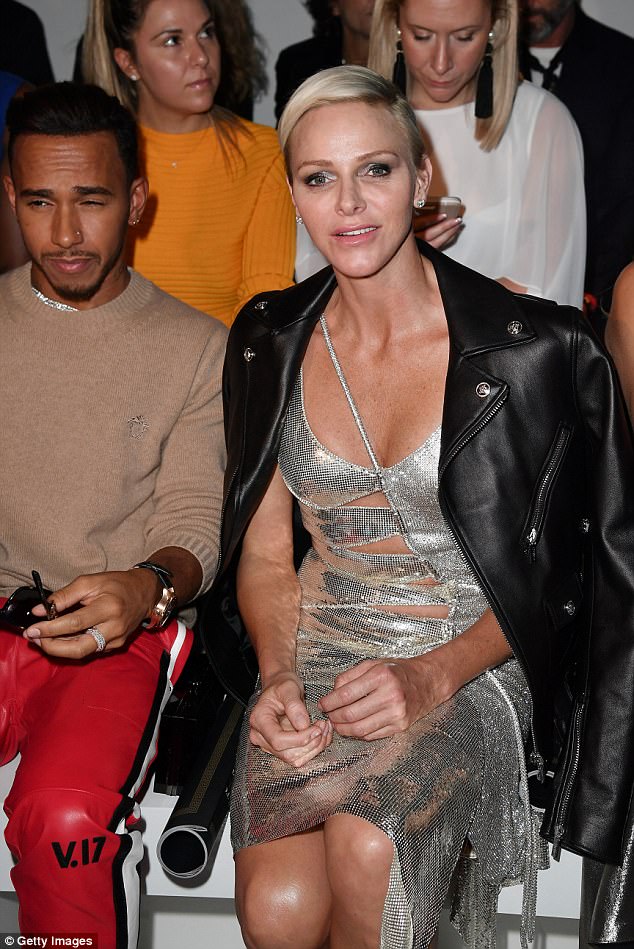 VIP: Charlene sat on the front row next to Formula One driver Lewis Hamilton (left)

The low-cut designer dress also featured a waterfall hemline, that dropped down over Charlene’s left knee, while coming up higher on the right side.

Sticking with the metallic theme, she paired the fashion-forward frock with some strappy silver heels that looked as though they might have been rather uncomfortable on her poor toes, with the tight brand at the front squishing her feet into a slightly-awkward looking position.

Clearly unfazed by any pain she may have felt as a result of her footwear, however, Charlene strutted confidently into the show, before taking her place on the front row alongside Formula One driver Lewis Hamilton – but not before posing for several pictures beforehand.

Indeed, the cameras appear to have gone gaga over Charlene’s daring dress, snapping pictures of her posing on the catwalk before the show’s start, both by herself, and alongside her front row friend Lewis, whom she has met previously at the Monaco Grand Prix. 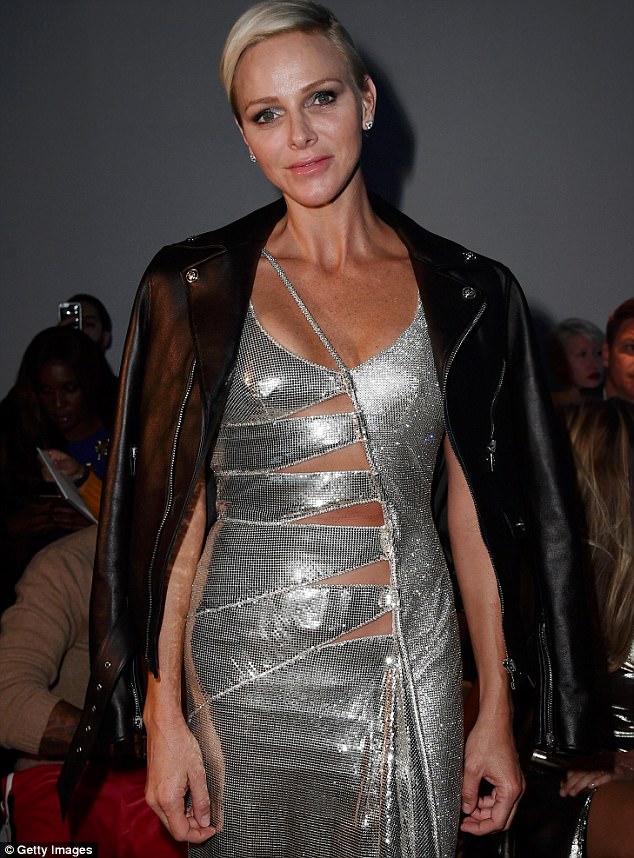 Daring: She had her cropped blonde hair slicked back from her face, no doubt to ensure that maximum focus remained on her dress 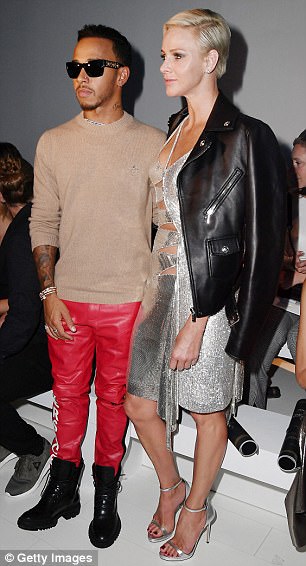 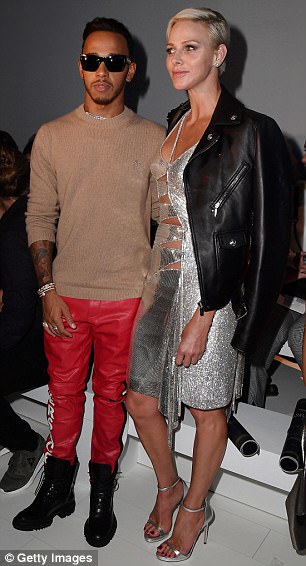 Front row friends: Charlene and Lewis have met previously in her home country, when the driver took part in the Monaco Grand Prix 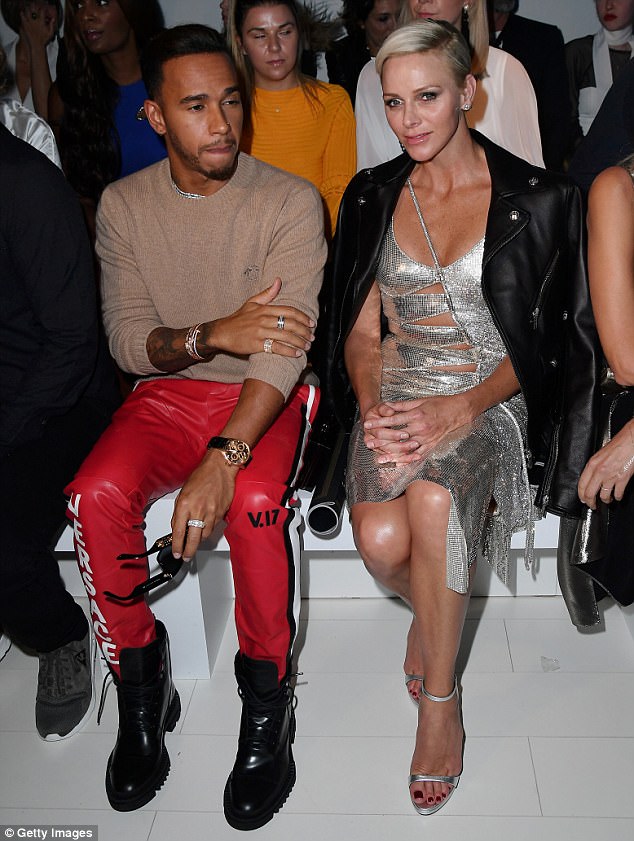 Catching up: The pair seemed perfectly relaxed in each other’s company as they waited for the show to begin

Drawing maximum attention to her dress, Charlene left her short blonde locks slicked back from her face, while opting for a slightly more dramatic make-up look in the form of a smokey eye – perfect for the nighttime event.

She topped off the look with a trendy black leather jacket that featured silver hardware to match her metallic dress.

Charlene was joined by fellow high-profile guests Cate Blanchett, the Oscar-winning actress and long-term fan of the brand, and Roberta Armani, the niece of designer Giorgio. 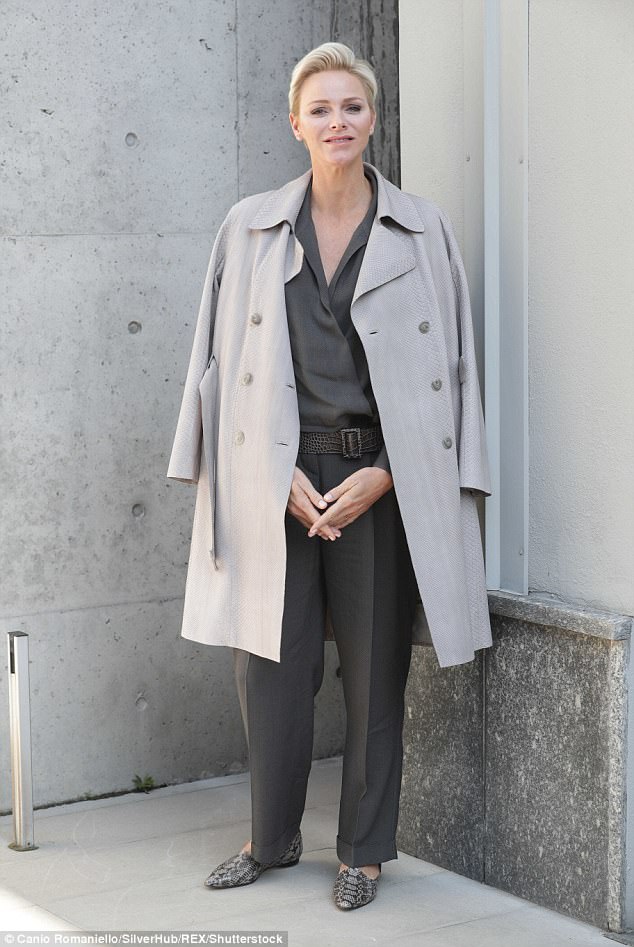 From Monaco to Milan: Earlier in the day, she looked chic in a stone trench, olive green trousers, and snakeskin flats while attending the Armani show 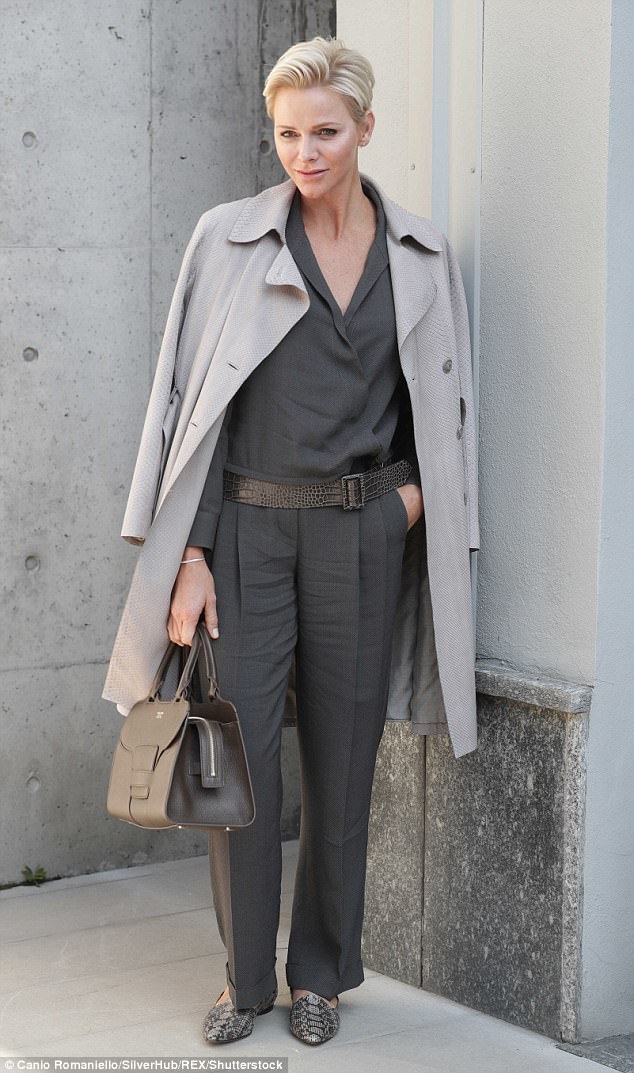 Famous friends: She sat alongside the designer’s niece Roberta on the front row 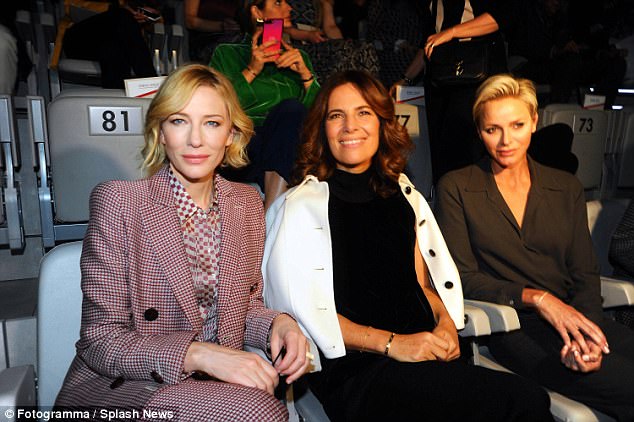 Hollywood’s finest: She and Roberta were also joined on the front row by Oscar-winning actress Cate Blanchett

The Princess and mother to Princess Gabriella and Prince Jacques looked incredibly chic in an olive green shirt and trousers, and flat snakeskin mules.

She carried an olive green designer tote, and draped her classic trench over her shoulders in the style favoured by fashion editors.

The South African Princess was snapped smiling and laughing with Roberta Armani – a friend of the celebrities including the Beckhams and Tom Cruise – outside the venue.

Roberta also looked stylish in an all-black outfit topped off with a cropped white jacket – which she too wore slung over her shoulders.

She’s the director of PR for her uncle’s celebrated fashion house, and a firm fixture in stylish international circles.

Princess Charlene made a splash at Milan Fashion Week after marking the end of summer in Monaco with her family at the country’s annual picnic.

She and Prince Albert walked hand in hand with the royal twins at the Princess Antoinette Park at the picnic, which is described as the ‘most joyous official event of the year’, and to which the whole nation is invited. 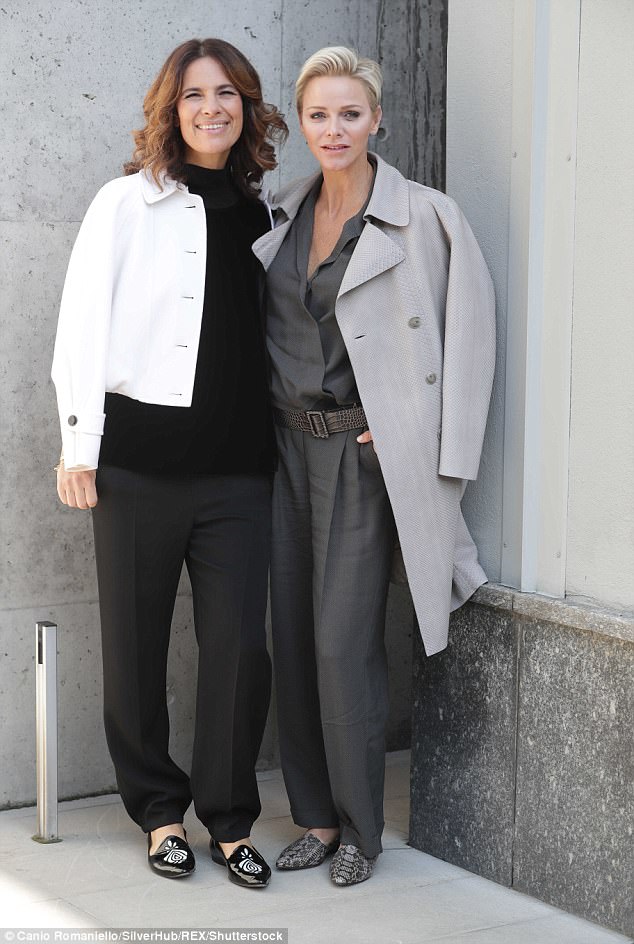 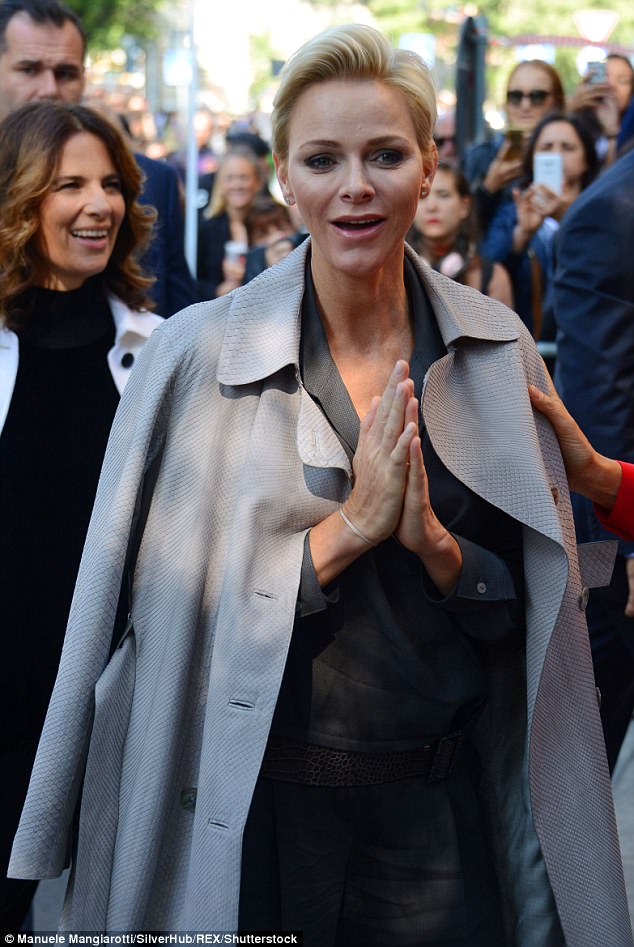