The storm ripped through the airport on Wednesday, with 185mph winds blowing over safety fences and battering nearby Maho beach.

Huge rocks smashed into planes, and boarding walkways were slammed to the ground by the downpour of rain and gusts of wind, which also brought loads of sand on to the runway. 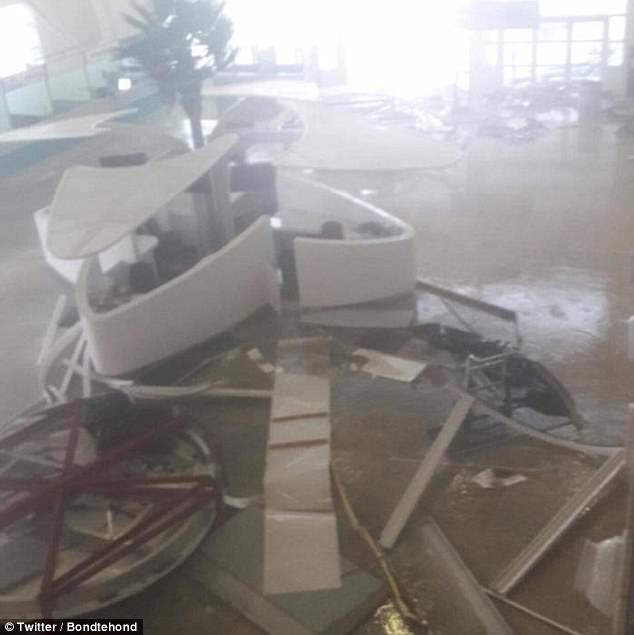 Huge rocks smashed into planes, and boarding walkways were slammed to the ground by the downpour of rain and gusts of wind, which also brought loads of sand on to the runway 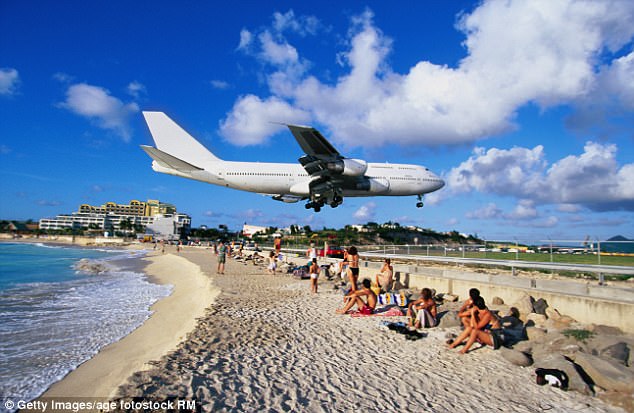 Inside the airport, which lies on the Dutch side of Saint Martin island, the check-in lounge was flooded and walkways were damaged by the storm.

Parts of the building had broken off during the storm and were seen lying on the runway after the storm passed.

Photos of the damage were documented by a hurricane rescue team, who went in after the storm passed.

Princess Juliana Airport suspended all operations at the airport on Tuesday as a precaution before Hurricane Irma hit.

Michel Hyman, COO/Acting CEO of the airport, said in a statement: ‘We regret any inconvenience this will cause, but must stress that the safety and security of all is priority number one at SXM Airport.’

‘We will continue to closely monitor the developments of Hurricane Irma as it passes over our area and keep all our personnel, users and stakeholders informed of any further developments as these occur, via the various media outlets,’ stated Hyman. 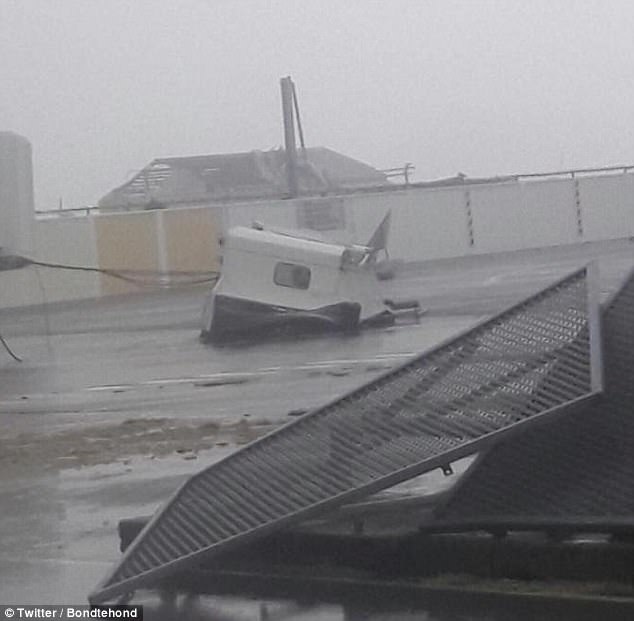 Inside the airport, which lies on the Dutch side of Saint Martin island, the check-in lounge was flooded and walkways were damaged by the storm 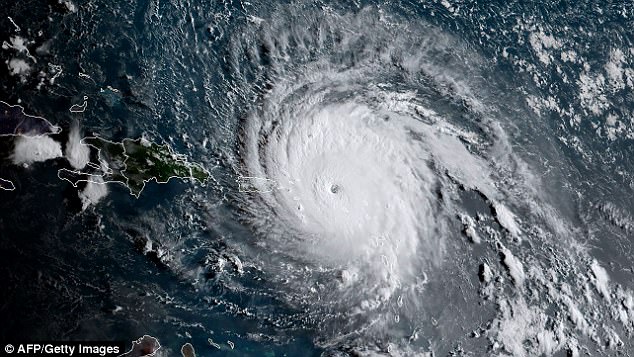 Hurricane Irma strengthened into a powerful Category 5 storm on Tuesday night as aid agencies braced for a ‘major humanitarian response’. Above, a satellite view of the storm this morning 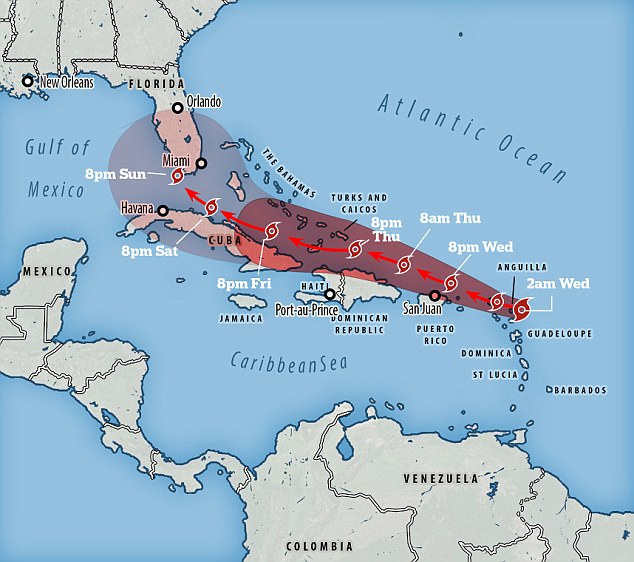 Storm coming: The most powerful Atlantic Ocean hurricane in recorded history made its first landfall in the islands of the northeast Caribbean early Wednesday, churning along a path pointing to Puerto Rico, the Dominican Republic, Haiti and Cuba before possibly heading for Florida over the weekend

Winair canceled its services on Tuesday and Wednesday, saying it would work to re-book customers’ flights at no additional cost.

Hurricane Irma has caused torn off rooftops and knocked out all electricity across Saint Martin, as well as on the French island of Saint Barthelemy.

WHEN WILL IRMA HIT?

Bahamas: Friday to this weekend

Cuba: Friday to this weekend

Southeast United States: This weekend into early next week, beginning in south Florida on Saturday

Banks on St Martin closed on Tuesday ahead of the storm, while WTN-Cable management dismantled its sites to avoid irreparable damage.

All sites will return to normal after the storm passes and authorities give the go-ahead for people to move around the island.

France has requisitioned planes and sent in emergency food and water rations.

President Donald Trump owns a property in St Martin – Le Chateau des Palmiers, which is currently up for sale.

It is unknown if his property was damaged by the storm.

Meanwhile, a Dutch navy spokeswoman said that marines who flew to three islands hammered by Hurricane Irma have seen a lot of damage, but have no immediate reports of casualties.

The Category 5 storm made a direct hit Wednesday on Saint Martin, the island where the Dutch territory of St Maarten is located. Some 100 Dutch marines flew to the islands on Monday to prepare for the hurricane. 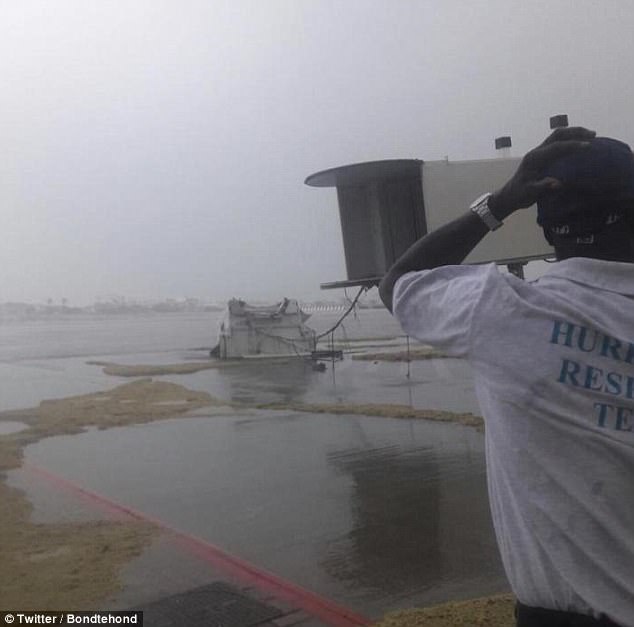 Social media videos show how the hurricane lashed the coastline of Saint Martin overnight with cars submerged in water. This picture is believed to have been taken at the Beach Plaza hotel on the island 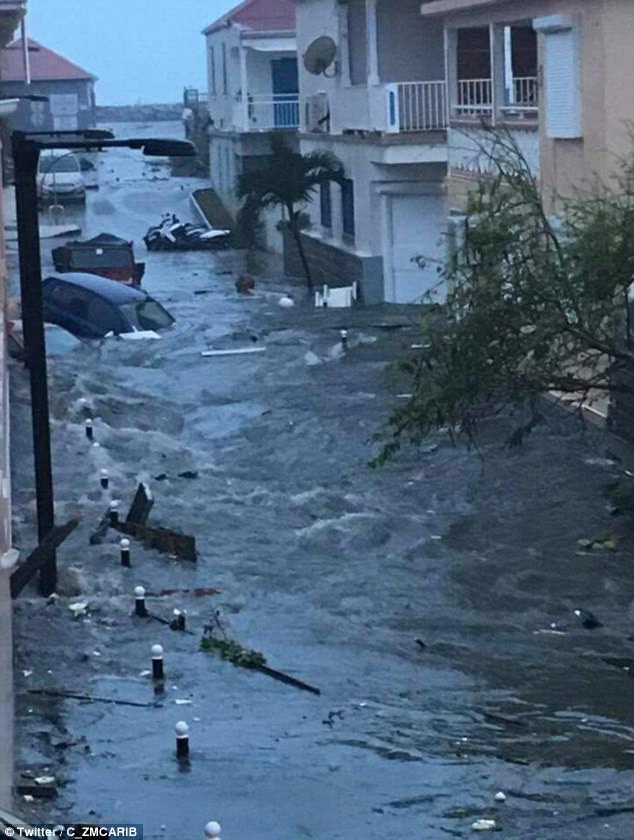 Navy spokeswoman Karen Loos says that some troops were able to send images of destruction from St. Maarten and another island, St. Eustatius.

Loos says, ‘You do see there is a lot of damage. Trees, houses, roofs that are blown out. A lot of water, high water.’

She says the extent of the damage elsewhere on the island is not yet clear.

The first of two Dutch naval vessels heading for the islands is expected to arrive at 8pm local time in St. Maarten.

The regional authority for Guadeloupe and neighboring islands said in a statement on Wednesday that the fire station in Saint Barthelemy is under 1 meter (more than 3 feet) of water and no rescue vehicles can move.

It said the government headquarters Saint Martin is partially destroyed and the island is in a total blackout.

Electricity is also partially down on the larger island of Guadeloupe, where the threat receded despite danger of heavy flooding.

French minister for overseas territories Annick Girardin expressed fear ‘for a certain number of our compatriots who unfortunately didn’t want to listen to the protection measures and go to more secure sites.’ 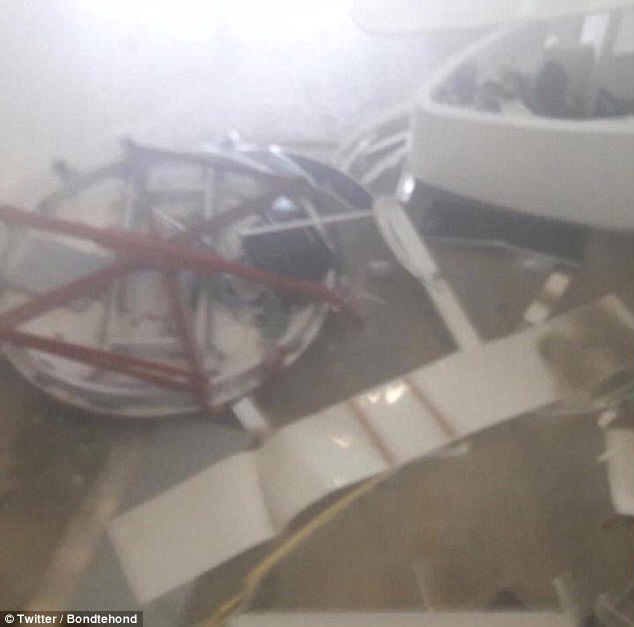 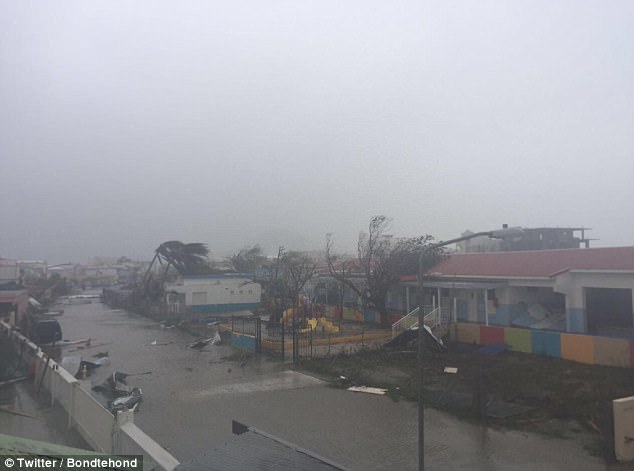 Hurricane Irma has caused torn off rooftops and knocked out all electricity across Saint Martin (pictured), as well as on the French island of Saint Barthelemy

She added: ‘We’re preparing for the worst.’

Antigua and Barbuda Prime Minister Gaston Browne said his twin-island nation appears to have weathered its brush with Hurricane Irma.

Hurricane Irma is roaring along a path pointing to Puerto Rico, the Dominican Republic, Haiti and Cuba before possibly heading for Florida over the weekend.

President Donald Trump declared emergencies in Florida, Puerto Rico and the US Virgin Islands, and authorities in the Bahamas said they would evacuate the residents of six islands at the southern end of the island chain amid fears the hurricane is hurtling towards the US east coast.

A mandatory evacuation is under way in the Florida Keys.

Uccellini said on Wednesday that he’s concerned about Florida up the east coast to North Carolina, starting with the Florida Keys.

He warns that ‘all the hazards associated with this storm’ are going to be dangerous.

Hurricane expert Kerry Emanuel of MIT calculates that Irma holds about 7 trillion watts – about twice the energy of all bombs used in World War II.