Princess Mary of Denmark stuns in monochrome dress in Paris

Mrs Macron, 66, stunned in a pink dress as she joined the Australian-born royal, 47, on a visit to the Elysee Palace in Paris, following an earlier visit to Centre Georges Pompidou modern art museum.

The duo appeared in good spirits as they explored the official residence of the French President joined by officials and ambassadors.

Getting on famously! First Lady Brigitte Macron and Princess Mary of Denmark chatted happily on a visit to the Centre Georges Pompidou modern art museum in Paris today 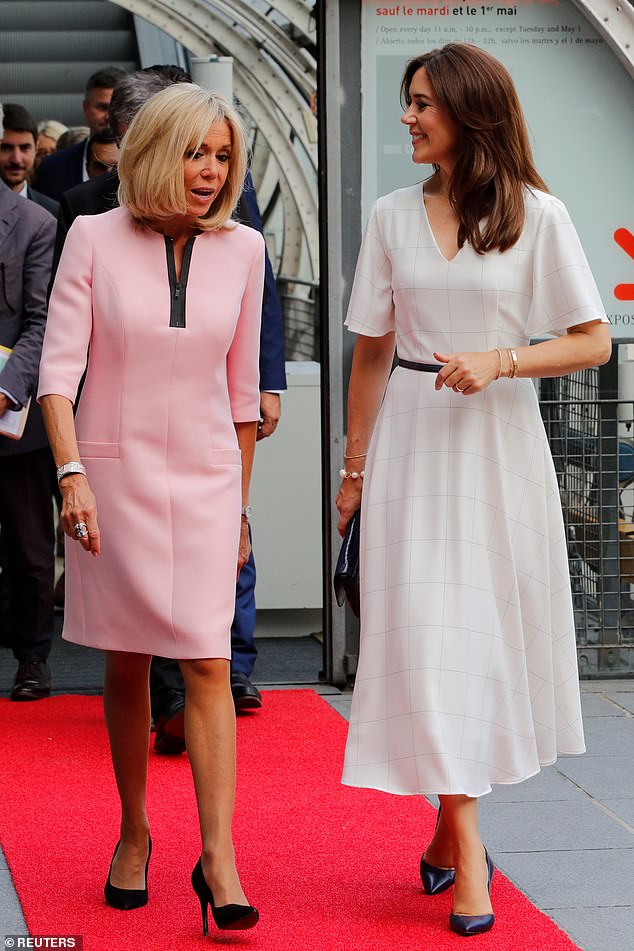 Perfectly polished: Mrs Macron plumped for a sherbet pink dress while Mary looked elegant in monochrome. The Danish royal is currently on a visit to France 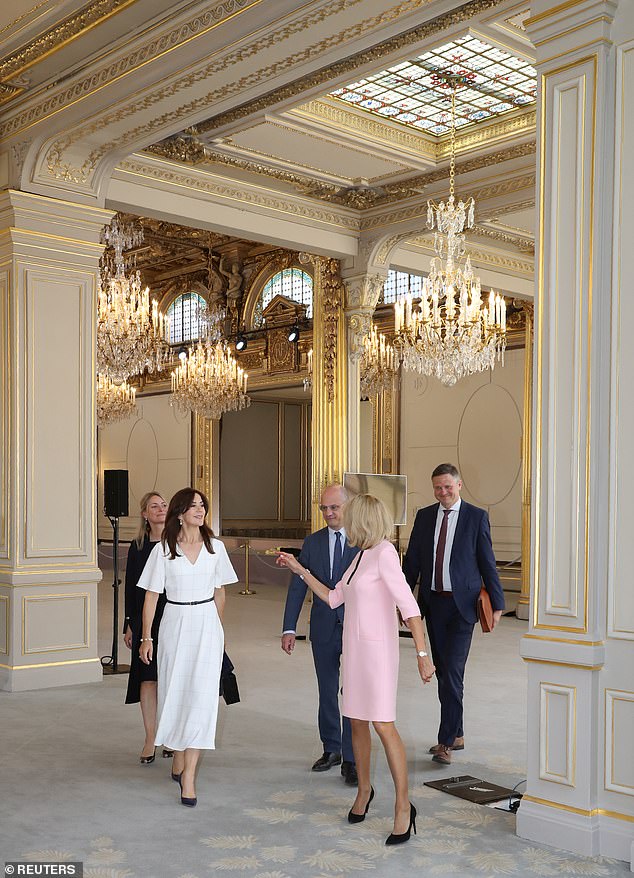 The wife of French President Emmanuel Macron and Danish Crown Princess Mary, were joined by Education Minister and Youth Affairs Jean-Michel Blanquer and ambassador of Denmark in France Michael Starbaek Christensen for a visit to Elysee Palace in Paris, later in the day 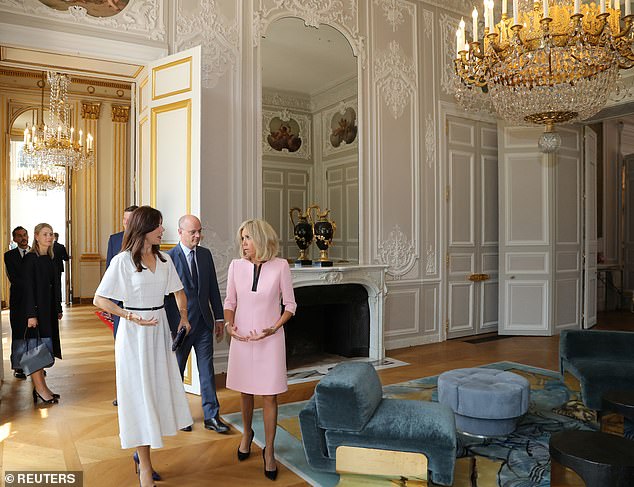 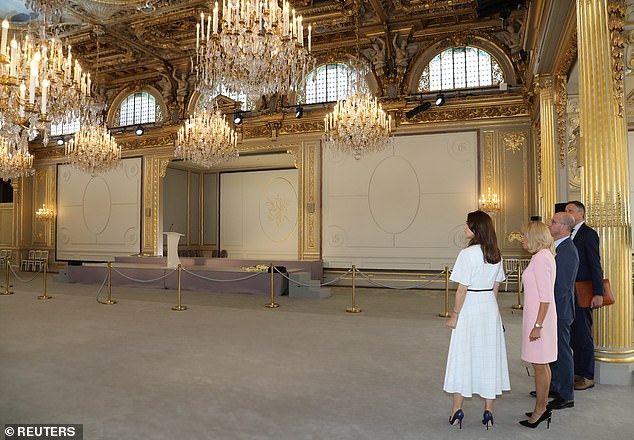 The duo toured the official residence of the French President, taking time to admire the historic decor and ceilings filled with chandeliers

Princess Mary, who earlier attended a health conference in the city, looked perfectly polished in a monochrome ensemble.

The royal cut a slender frame in a white short sleeve, mid-length dress, with pinstriped detail for a health conference at the House of Denmark in the French capital.

She paired the look with a skinny black belt and black court heels for her public appearance.

The Countess of Monpezat added an extra touch of glamour to her outfit as she wore a thin gold necklace, a collection of bracelets, as well as a pair of drop down pearl earrings. 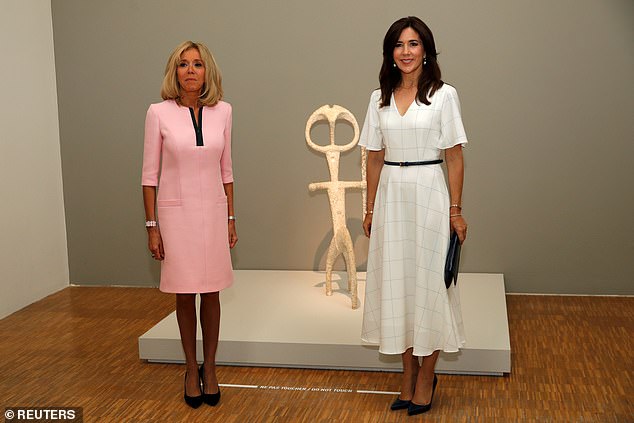 Sightseeing: The First Lady and the Princess posed for a photo in front of a sculpture in the Paris modern art museum today 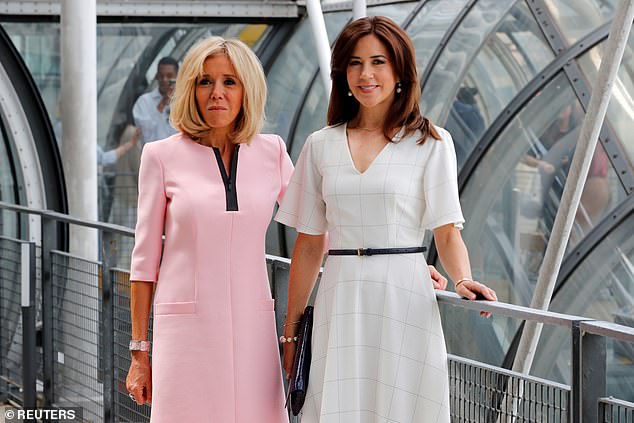 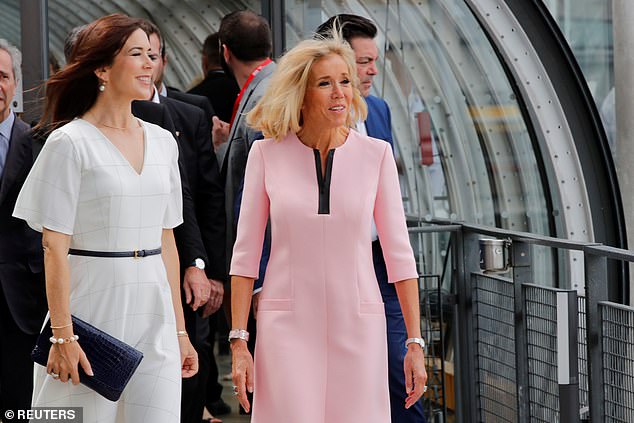 The pair were all smiles as they made their way to the modern art museum together, as Brigitte could be seen beaming at the Danish royal 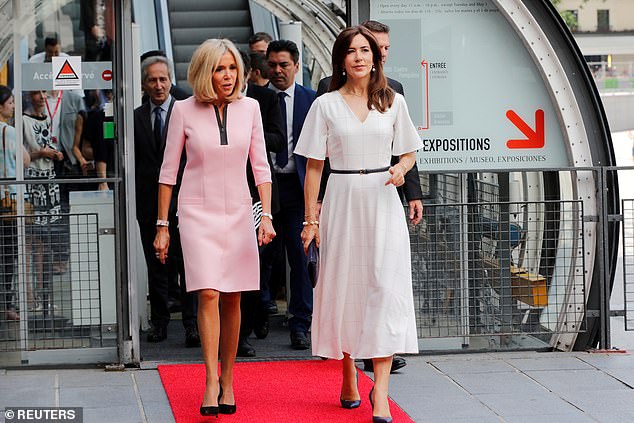 The duo appeared to coordinate their outfits as they hit the red carpet; Brigitte stunned in a pastel pink dress with a black hem and heels, while Mary opted for a white and black combo 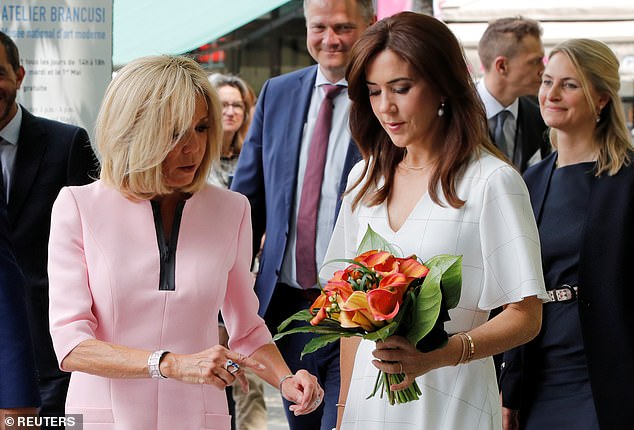 Mary kept her brunette locks in neat waves that draped elegantly over her shoulders.

While her make-up brought the extra touch of glamour as she opted for a medley of taupe and brown eyeshadow, with a sweep of black eyeliner, as well as a nude lipgloss.

Just one day prior Mary turned heads in a more vibrant ensemble. 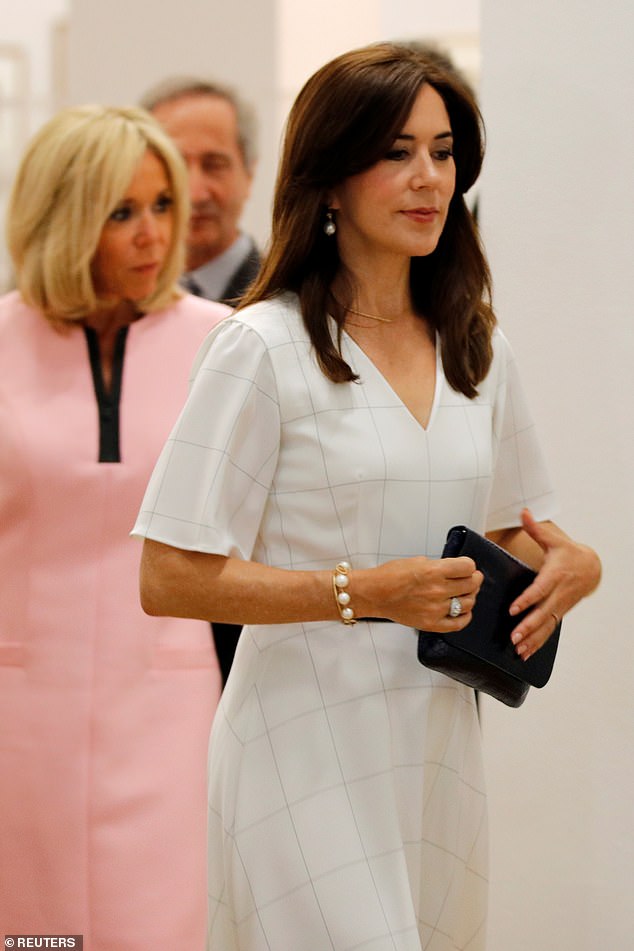 Mary showed off her elegant accessories as she wore a gold and pearl bracelet, which matched her earrings, while out and about in Paris 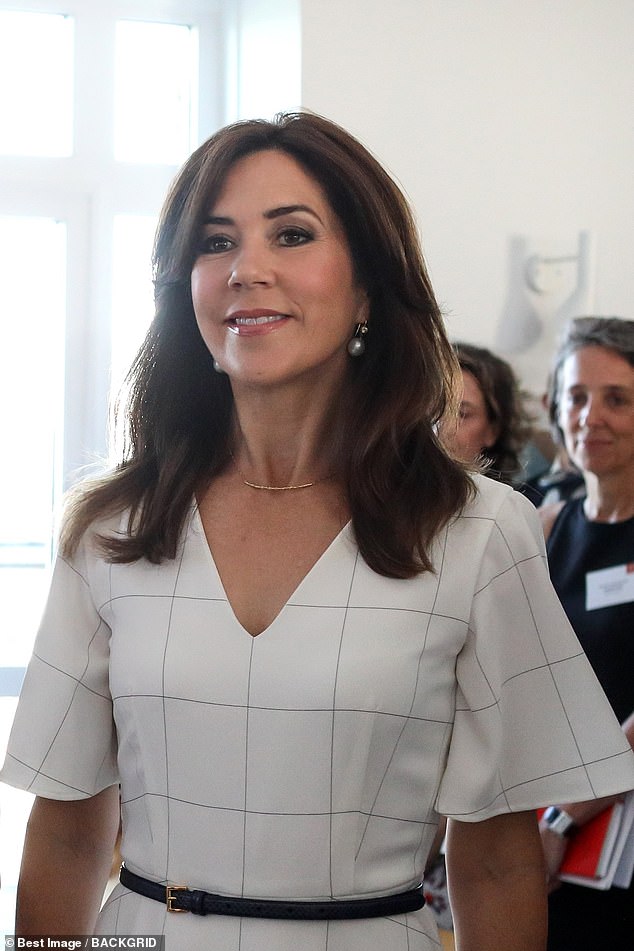 Princess Mary of Denmark slipped into an elegant monochrome dress, which boasted a v-shaped neckline, short sleeve and fell midway to her calves 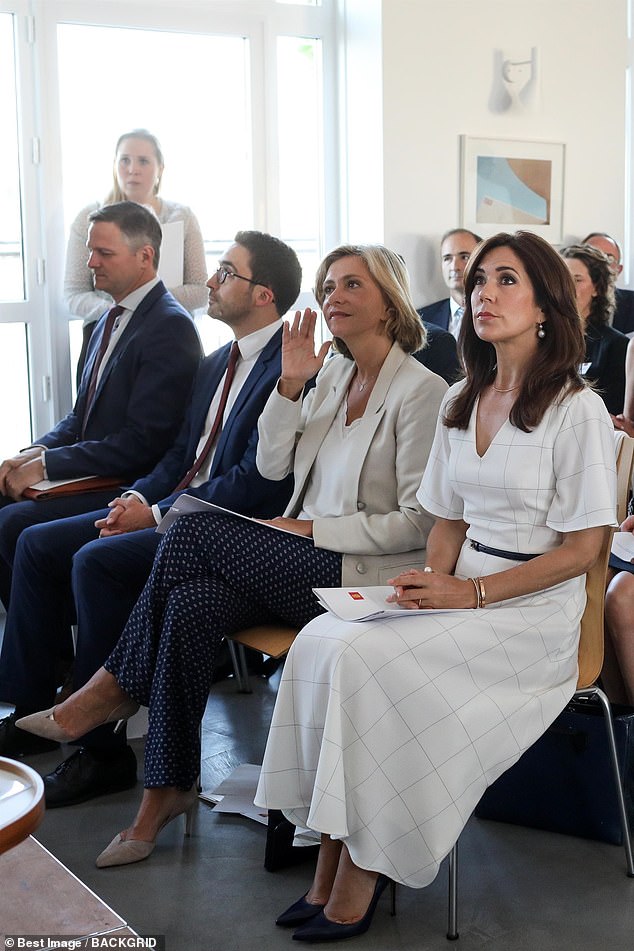 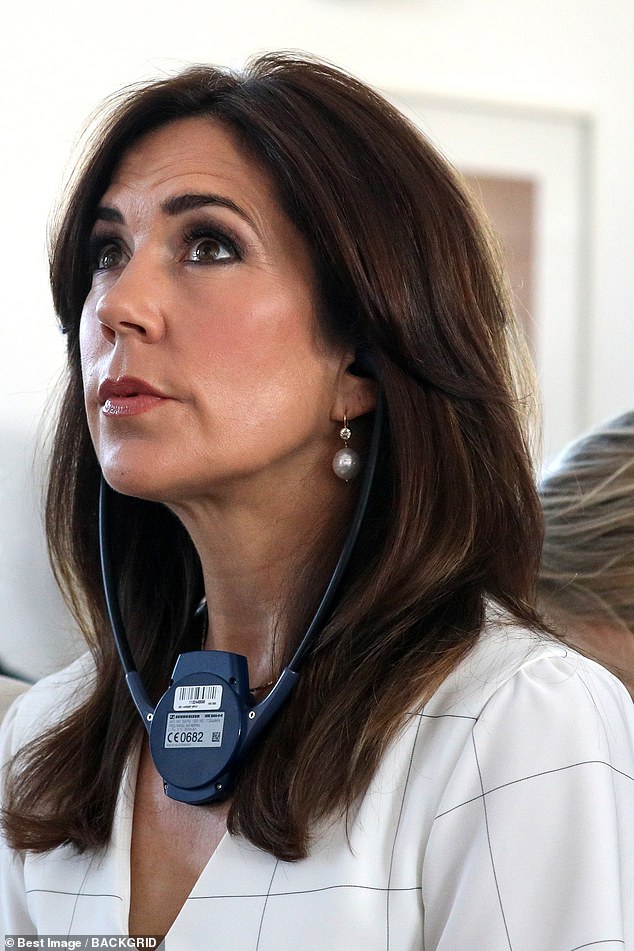 Mary was glowing as she opted for natural make-up for the event, but she added the extra touch of glamour with smokey eye make0up 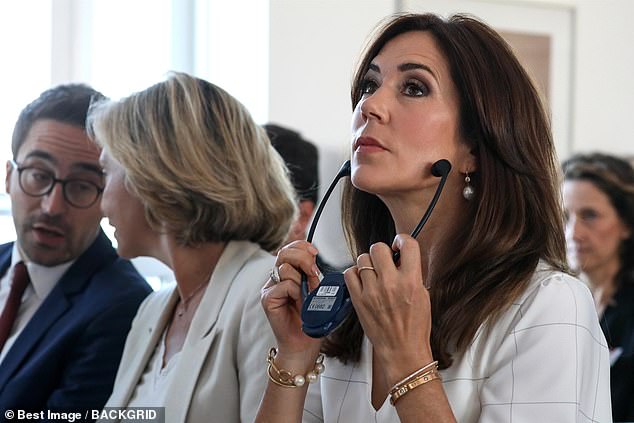 Mary wore a mixture of gold and pearl jewellery for her appearance. She completed her look with a pair of pearl drop down earrings, as well as a braceelt to match, and Cartier bangle

She oozed femininity as she wore a pair of pale pink pointed heels to match and a woven clutch bag.

The trio were also joined by a flower girl, Emma Levysohn,  who handed over a bouquet of pink roses to Mary before they shook hands.

Mary’s make-up was a little more toned down the day prior as she wore a few lashings of mascara and a glossy pink lipstick. 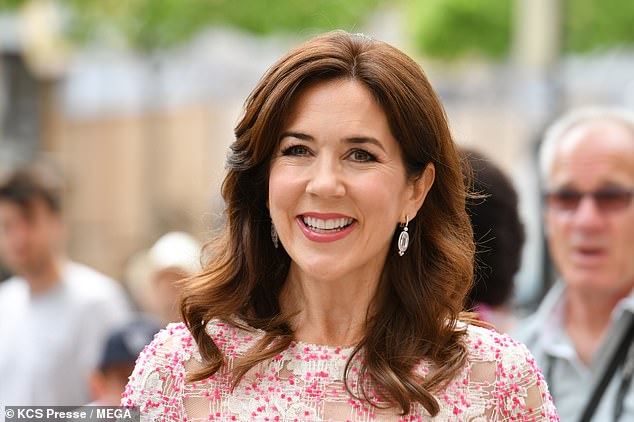 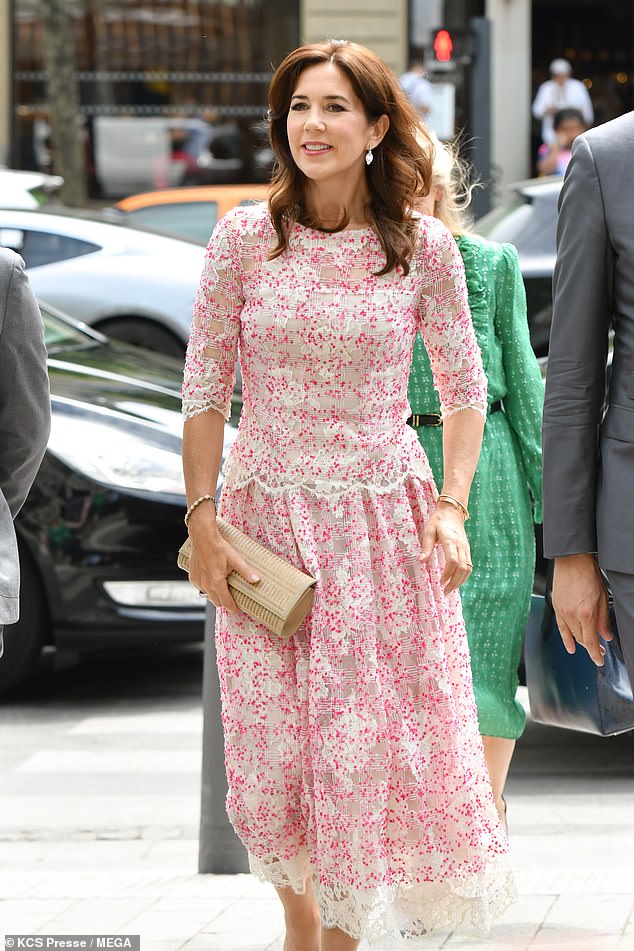 She slipped into the pink textured midi dress, with 3/4 length sleeves, and also boasted the extra detail of lace around the hem 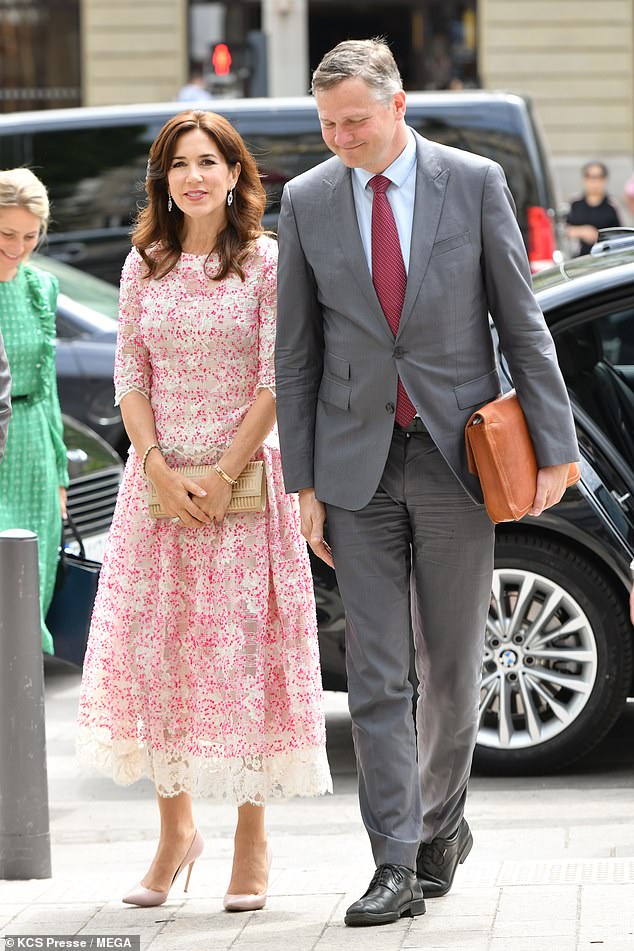 The love story between Princess Mary and Prince Frederick has been well documented over the years.

The couple met in a Sydney bar and Mary, born in Tasmania, moved to the northern hemisphere to be with Frederik. 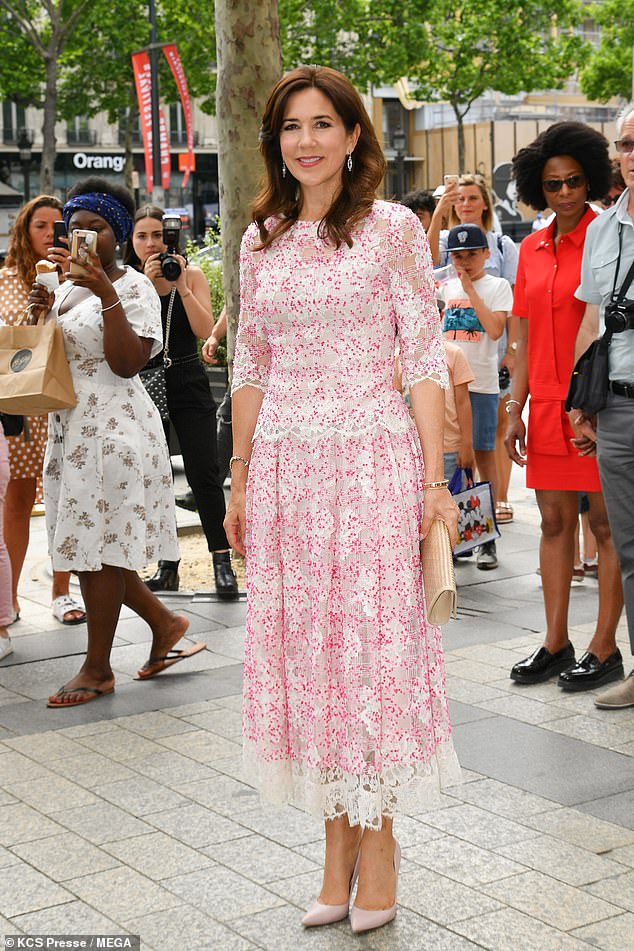 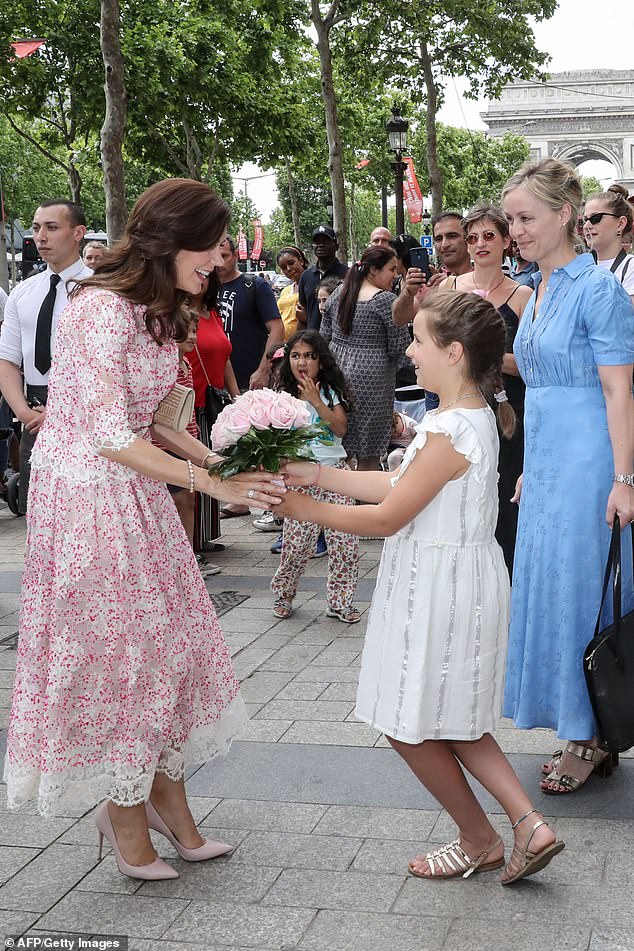 Mary received a warm welcome as she touched down in France, as she was handed a bouquet of pink roses, which coincidentally matched her outfit 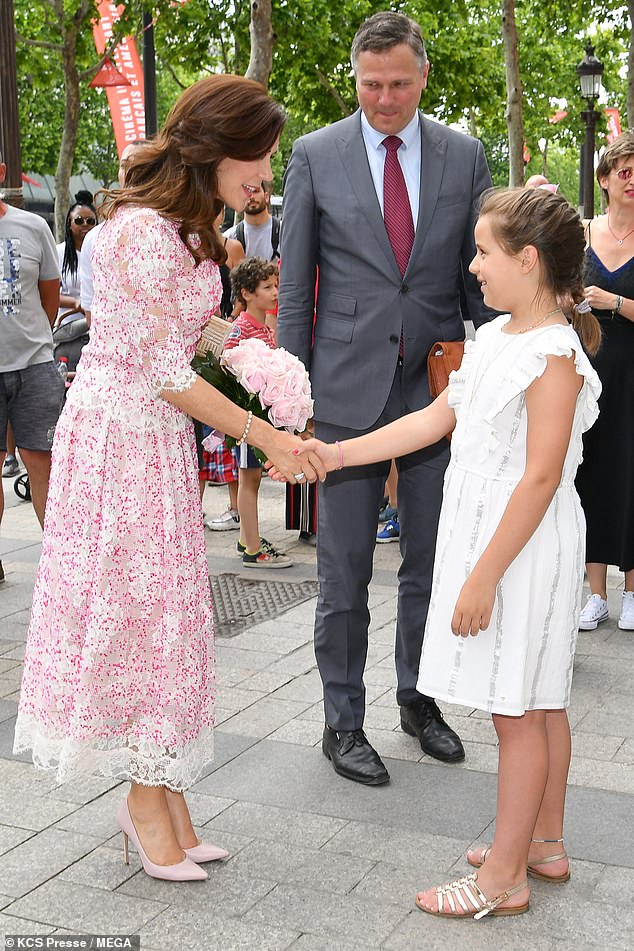 Flower girl, Emma Levysohn, wore a white ruffle dress, with metallic sandals, as she welcomed Mary.  After handing over the flowers, the pair shook hands 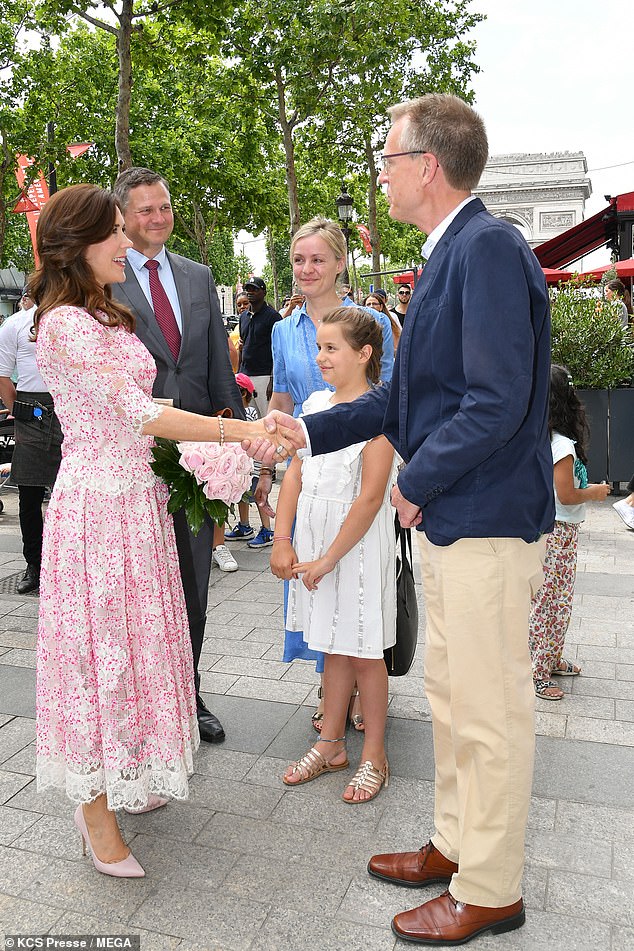 Director of Maison du Danemark, Torben Nielsen (right), also shook hands with Mary as she made her way into the venue in Paris 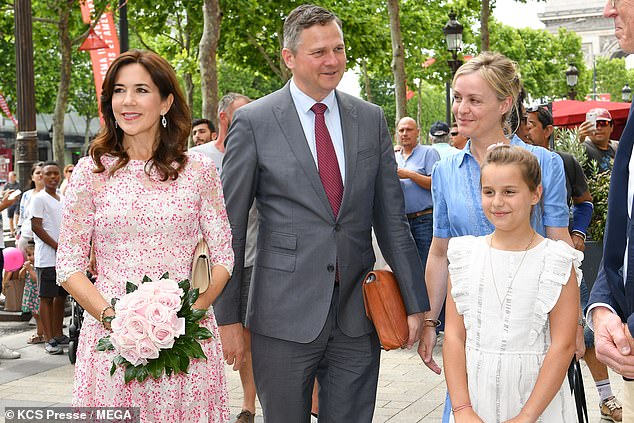 In a previous candid interview with Australian Women’s Weekly, the Crown Princess revealed that moving to the other side of the world was difficult.

She said: ‘I did experience a feeling of loneliness – short-term – when I first moved to Denmark.

‘Moving to Denmark was a huge change in my life – a new culture, new language, new friends, and another way of life.

‘So, I see it as quite natural that at times I felt quite alone or a little bit like I was on the outside looking in.’ 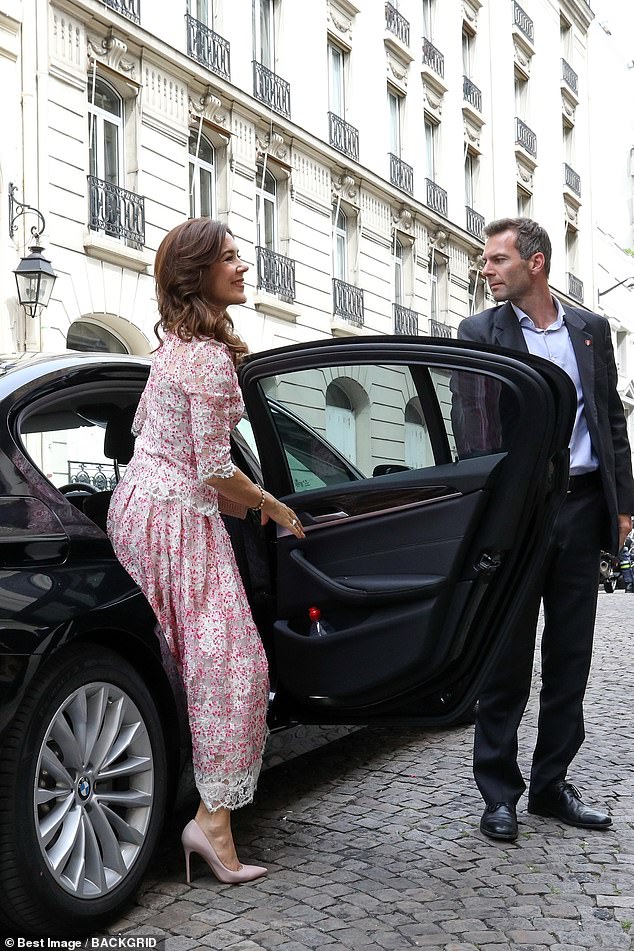 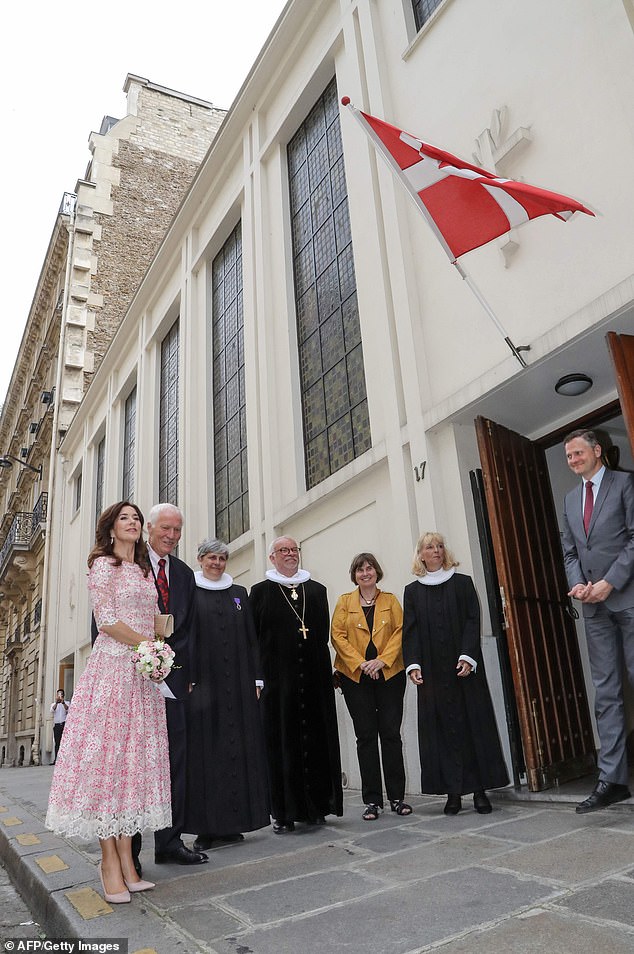 Mary posed for pictures outside of the Danish church with pastor Flemming Fleinert Jensen, pastor Selma Ravn and ambassador of Denmark to France Michael Starbaek Christensen 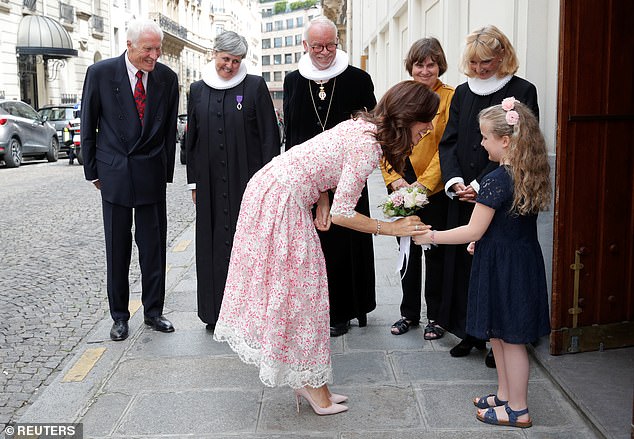 Mary was met with another youngster, and the pair held hands as they spoke outside of the Danish church in Paris yesterday 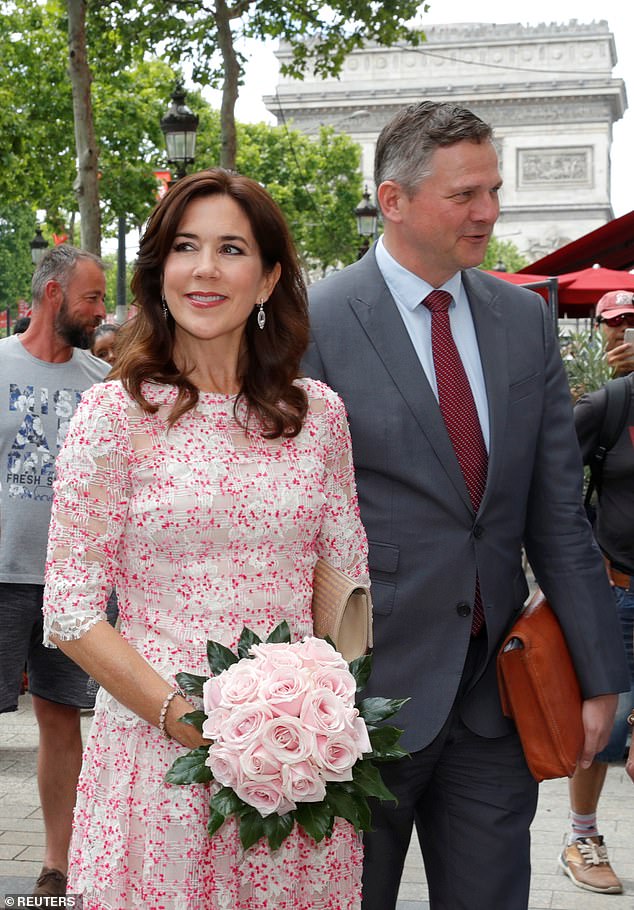 Mary paid extra attention to detail for her outing in Paris yesterday as she wore a pink diamond bracelet, which matched her dress and flowers