Priti Patel today launched a savage attack on big British business as she said companies had become ‘far too reliant on low skilled’ and ‘cheap’ workers from the EU.

The Home Secretary said Brexit would mean the end of EU free movement and as a result businesses will have to change their approach to building their work force.

She said the government believes ‘it is about time’ that businesses invested more in British workers as she set out details of Britain’s post-Brexit immigration system.

Meanwhile, she also insisted the UK will diverge from rules made in Brussels after Britain quits the bloc.

She said ‘we are not having alignment’ in comments which are notably tougher than those made by Chancellor Sajid Javid who last week said the UK would not diverge ‘just for the sake of it’.

The Migration Advisory Committee, an independent body which advises the government, is expected to publish a major report this week in which it will set out the data which will be used to underpin the post-Brexit immigration system.

Boris Johnson has pledged to introduce an Australian-style points based immigration system from January 2021 when freedom of movement from the bloc will formally end.

Businesses have urged the government to continue to allow low-skilled migrants to enter the UK from the EU after Brexit amid fears of staff shortages.

But the government has rejected their demands and Ms Patel said today that companies will have to make better use of British workers in the future.

She told Sky News: ‘They have been far too reliant on low-skilled and quite frankly cheap labour from the EU and we want to end that.

‘That is one of the key opportunities that we have when we leave the EU through the immigration system, the points based system, that we will be bringing.

‘Yes, supporting the brightest and the best but also encouraging British industry to do more to invest in capital, in people, in human capital and the skills that our country and our economy needs in the long run.’

Ms Patel also risked sparking business concerns about future trade with the EU after she struck a tough tone on post-Brexit divergence from rules and regulations made in Brussels.

There is an ongoing row within the government over to what extent the UK should diverge from EU rules amid fears that big changes could make it harder to export goods to the continent.

Ms Patel said: ‘There is no disagreement in government at all. We are clear we are leaving, we will be taking back control of our laws, our money, our borders.

‘In terms of divergence, let’s be very clear about this, we are not having alignment. We will be diverging. We want to take control of our laws, money, our borders and to do that we will not be rule takers. We will be setting our own laws and that is a fundamental feature of leaving the European Union.’ 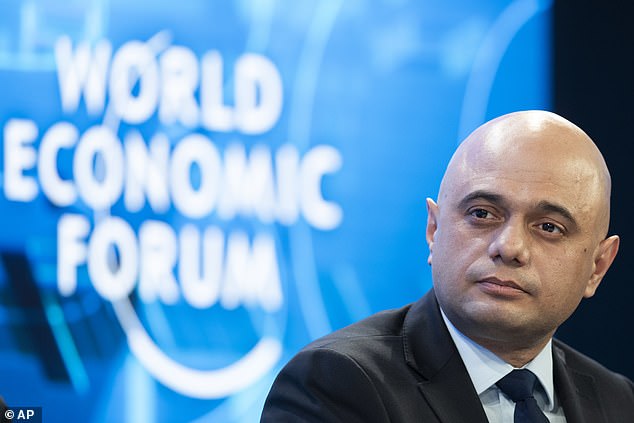 Ms Patel said today ‘we are not having alignment’ with EU rules after Brexit. Sajid Javid, pictured in Davos last week, said the UK would not diverge ‘just for the sake of it’

Her comments come after Mr Javid outlined his views on the subject during an event at the World Economic Forum in Davos, Switzerland, last week.

He said: ‘We are leaving the EU, the single market and the customs union and we are doing that so that we can have control of our rules and laws.’

Asked how the UK would diverge in practice, he said: ‘We won’t diverge just for the sake of it.’

Stephen Barclay, the Brexit Secretary, today echoed Mr Javid’s language as he told the BBC’s Andrew Marr Show: ‘We are not going to diverge just for the sake of it.’

The prospect of the UK diverging from EU rules after Brexit has spooked some in the bloc.

Helen McEntee, the Irish minister for European affairs, told Sky News: ‘I think we’re all in agreement, all 27 member states, that we want a close relationship with the UK, but there has to be balance of rights and obligations, there needs to be a level playing field.’

She said that ‘a lot of talk about divergence’ is ‘quite worrying’ as she argued negotiating a comprehensive trade deal between the UK and EU ‘essentially in 10 months’ will be difficult.