Priyanka Chopra faces calls to be removed as UN ambassador

A Pakistani government minister has called for Indian actress Priyanka Chopra to be sacked as a UN ambassador over her controversial tweet in support of the Indian armed forces.

Chopra was accused of ‘encouraging nuclear war’ after tweeting ‘Jai Hind’ – meaning ‘long live India’ – at the height of the India-Pakistan crisis in February.

Anger over the tweet has flared up again in recent days, amid revived tensions between the two countries, and Chopra was dramatically confronted by a Pakistani woman who called her a ‘bit of a hypocrite’ at an event in Los Angeles.

Accusing India’s government of ‘ethnic cleansing’ and ‘fascism’, the minister said that ‘Ms Chopra has publicly endorsed this Indian government position and also supported the nuclear threat issued to Pakistan by the Indian Defence Minister’.

The Pakistani minister went on: ‘All this goes completely against the principles of peace and goodwill that Ms Chopra is supposed to uphold as a UN Goodwill Ambassador for Peace.

‘Her jingoism and support for violations by the [Indian PM Narendra] Modi government of international conventions and UN resolutions on Kashmir, as well as support for war, including a nuclear war, undermines the credibility of the UN position to which she has been elevated.

‘Unless she is removed immediately, the very idea of a UN Goodwill Ambassador for Peace becomes a mockery globally.

‘Therefore I would request that she be immediately denotified as a UN Goodwill Ambassador for Peace.’

Chopra has been widely criticized for a February 26 tweet which translates as ‘long live India’, at the height of India-Pakistan tensions. The tweet has not been deleted 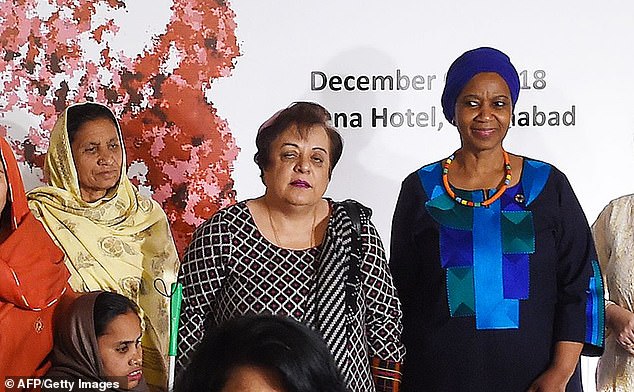 An online petition which also calls for Chopra’s removal currently has more than 100,000 signatures.

Chopra, who has been a goodwill ambassador since 2010, has yet to respond.

The actress had voiced her support for India’s armed forces during February’s flare-up over the disputed region of Kashmir.

Tensions escalated alarmingly after a massive suicide bombing killed 40 Indian troops in Kashmir on February 14, with the attack claimed by a Pakistan-based militant group.

Twelve days later Indian warplanes launched a strike inside undisputed Pakistani territory, claiming to have hit a militant camp, leaving the two nations on the brink of war.

That sparked a dogfight which ended the capture of an Indian pilot, Abhinandan Varthaman.

The tweet, which she has not deleted, reads: ‘Jai Hind #IndianArmedForces’, and was accompanied by an Indian flag and a symbol of two hands clasped together.

Priyanka Chopra tweeted during a time when we were this ?? close to sending nukes to one another. Instead of advocating for peace she tweeted in support of the Indian army pic.twitter.com/LhbMkOW59v 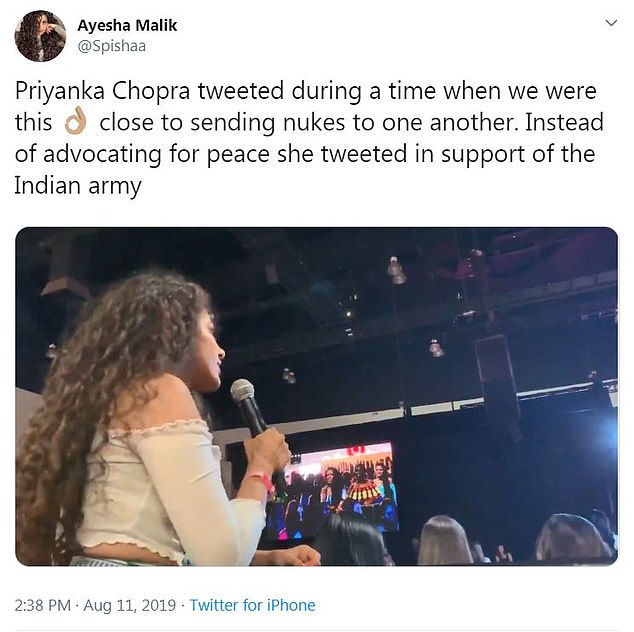 At the time, she was accused of hypocrisy and ‘glorifying war’ by Pakistani actress Armeena Khan.

Tensions cooled after Pakistani PM Imran Khan released the captured Indian pilot in a ‘peace gesture’ which India claimed as a victory.

However, matters have worsened again in recent weeks after India stripped Kashmir of its special status and imposed a security clampdown.

Anger over Chopra’s tweet has resurfaced and last week she was confronted by an audience member at Beautycon in Los Angeles.

Ayesha Malik was handed the microphone during a Q&A session and told Chopra that ‘as your neighbour, a Pakistani, I know you’re a bit of a hypocrite’.

‘You are a Unicef ambassador for peace and you’re encouraging nuclear war against Pakistan,’ Malik alleged.

‘As a Pakistani, millions of people like me have supported you in your business of Bollywood.’ 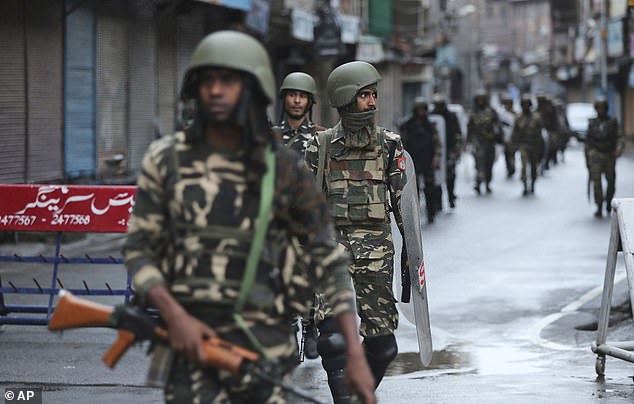 Security workers took the microphone away from Malik, while Chopra replied: ‘War is not something that I’m really fond of, but I’m patriotic.’

Earning some cheers from the audience, she went on: ‘I’m sorry if I hurt sentiments to people who do love me and have loved me, but I think that all of us have a sort of middle ground that we all have to walk.

‘The way you came at me right now? Don’t yell, we’re all here for love. Don’t yell, don’t embarrass yourself.’

Subsequently explaining herself on Twitter, Malik said: ‘Both India and Pakistan were in danger. And instead she [Chopra] tweeted out in favor for nuclear war.’

Both countries claim Kashmir, and have fought two of their three wars over the Himalayan region, which they have disputed since partition and independence from British colonial rule in 1947.

Today, Pakistan controls around a third of Kashmir while India administers to the other two-thirds, including the Kashmir valley.

There has also been a long-running insurgency against Indian rule which has seen some 70,000 people – mostly civilians – killed since 1989.