Priyanka Chopra uploaded an adorable Instagram photo of herself on Saturday as she held her 11-month-old daughter, Malti, on her lap as they prepared for a special getaway.

The talented star, 40, cheerfully looked out the window with her mini me as they relaxed on a spacious private jet.

The film producer shares her daughter, born via surrogate in January, with her husband, Nick Jonas.

A getaway! Priyanka Chopra, 40, uploaded an adorable snap of herself holding her daughter, Malti, as they two lounged on a private jet in a new Instagram story shared on Saturday

The two stars celebrated their fourth wedding anniversary earlier this month, and penned heartfelt tributes to each other.

On Saturday, Priyanka was pictured sitting in a comfortable chair next to a window on the plane, as Malti easily balanced on her lap to also look out at the stunning view.

The model opted for stylish comfort for the exciting day of travel, and slipped into a pair of loose-fitting black pants along with a long-sleeved, black jacket.

She added a plain, off-white top underneath and wore a pair of black shoes to complete her overall ensemble.

The beauty donned a black beanie to partially cover her long locks which flowed past her shoulders in light, natural waves. The talented star accessorized her casual look with a pair of large, stylish shades and flashy, gold-hooped earrings.

Priyanka wrote a short caption onto the photo, hinting to her fans that they were about to enjoy a getaway amid the holiday season. ‘Off we go….,’ she typed, followed by a red heart emoji. 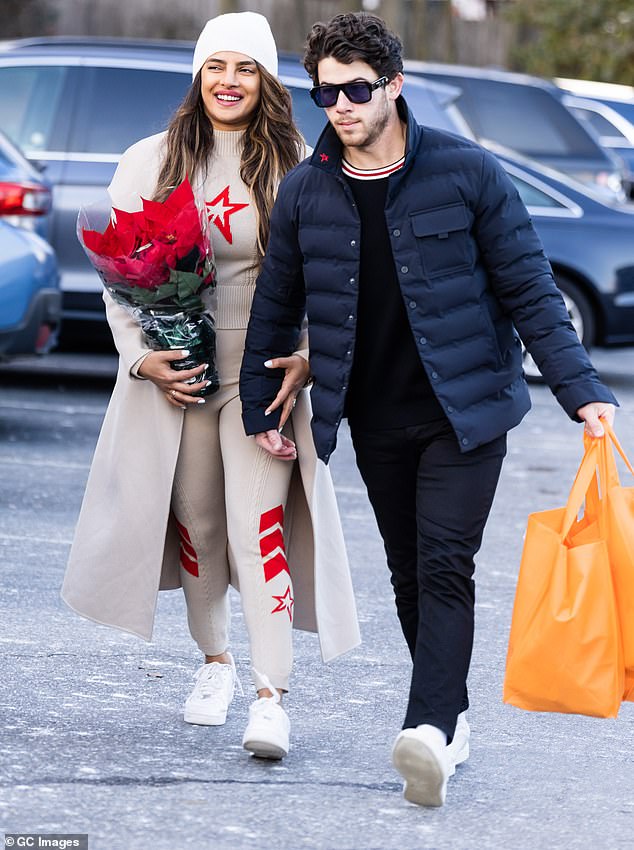 Shopping: The beauty and her husband, Nick Jonas, were spotted enjoying a quick shopping spree in Montclair, New Jersey 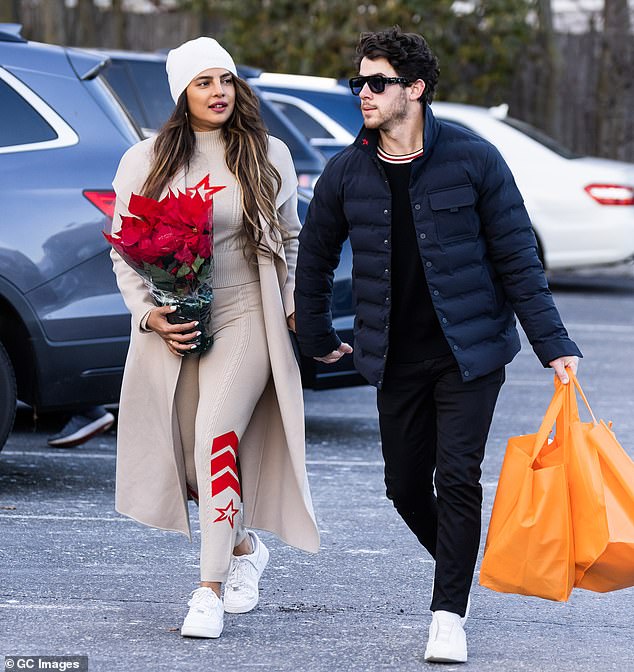 Stylish duo: The two lovebirds affectionately held hands as they walked through a crowded parking lot after picking up a few items, including a classic red poinsettia

Before uploading the travel photo onto her Instagram story, Priyanka and Nick were spotted picking up a few items in Montclair, New Jersey together on Saturday.

The stunning couple were dressed warmly for the outing, with the model wearing fitted, tan and red printed leggings. She also added a matching tan sweater with a red star embroidered on the front.

She slipped into a tan coat that fell down towards her ankles, and opted for comfort by wearing classic white sneakers. The beauty threw on a white beanie on top of her voluminous locks.

Similar to his wife, Nick also opted for stylish comfort, wearing a pair of black pants and a crew neck black sweater with a white and red-striped pattern bordering the collar.

He slipped on a dark blue, puffer jacket and added black shades to complete his look for the errand run. The former Disney channel star also wore a pair of eye-catching white sneakers. 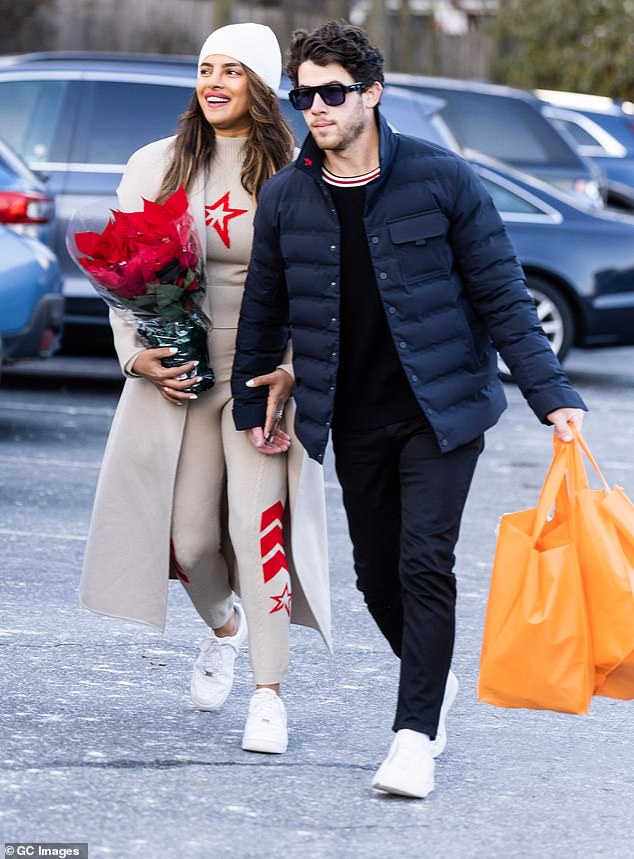 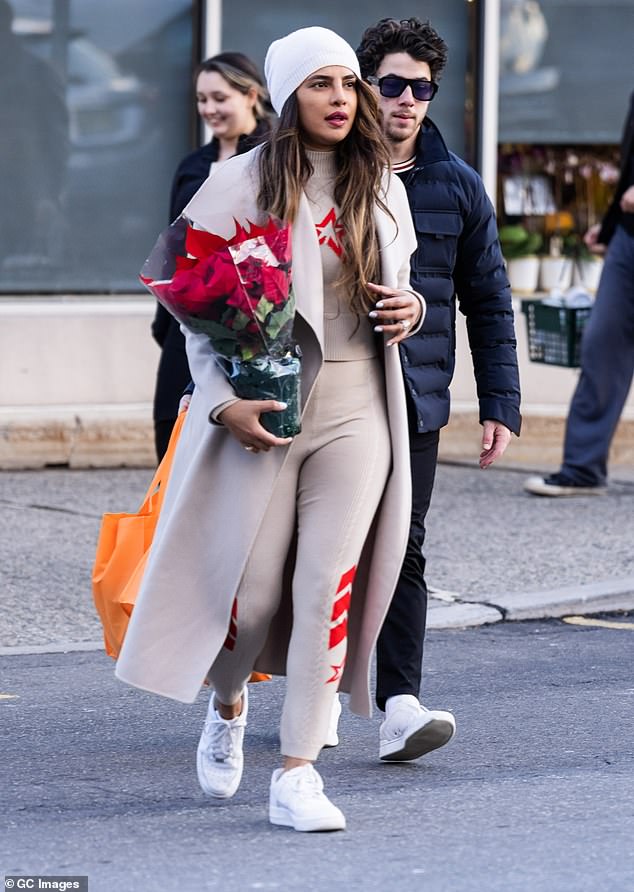 Busy day: The couple showed off their casual sense of style as they enjoyed an outing in New Jersey together 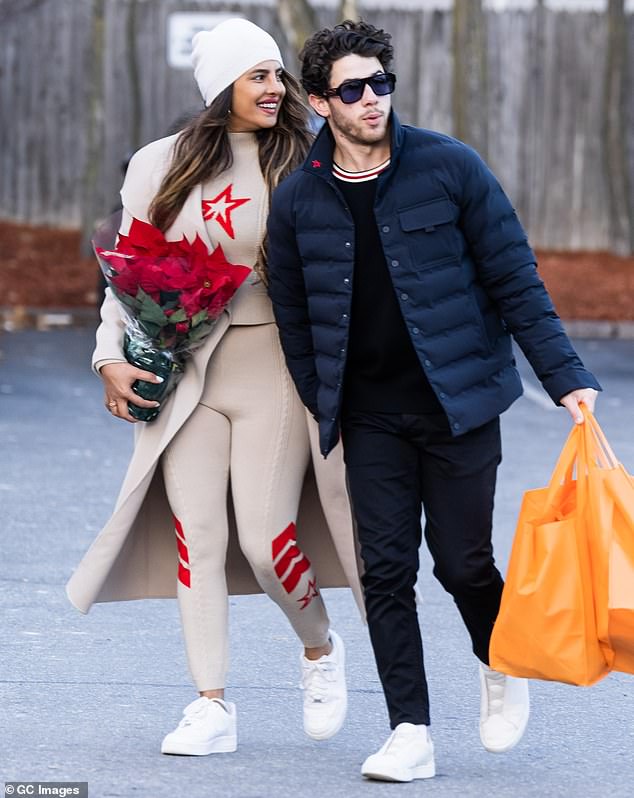 Good spirits: Priyanka was seen flashing a smile as they made their way through the parking lot hand-in-hand

Priyanka was seen flashing a smile as they made their way through the crowded area, with the mother of one cradling a red poinsettia plant in her right hand.

Nick carried a couple of orange bags full of various items, while his free hand affectionately held his wife’s.

The pageant winner additionally shared a heartwarming photo of herself on Friday as she stood closely next to her husband, Nick, and their daughter, Malti, as they enjoyed a day out at the aquarium in Los Angeles.

‘Family,’ she simply typed out, followed by the hashtags, ‘#aquarium #familyday #love.’ The actress has been sharing adorable snaps that have captured memorable moments of both Nick and herself raising their daughter.

Earlier in December, Priyanka and Nick celebrated their fourth wedding anniversary, and they each penned a heartfelt tribute to each other on Instagram to commemorate the special milestone. 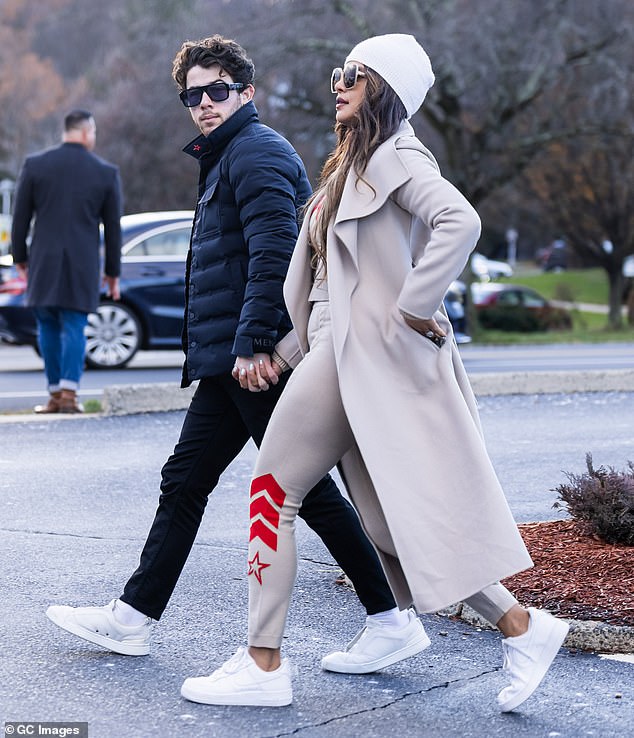 Taking the sites: The two lovebirds were seen taking in the sites as they walked towards the store 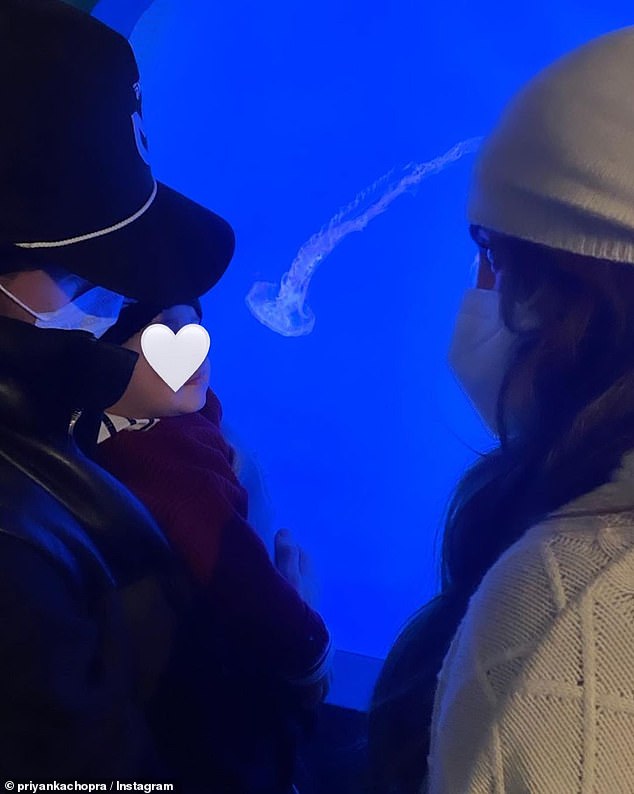 Family time: The actress and model recently shared a family snap of herself, husband Nick Jonas, and Malti as they visited a day at the aquarium 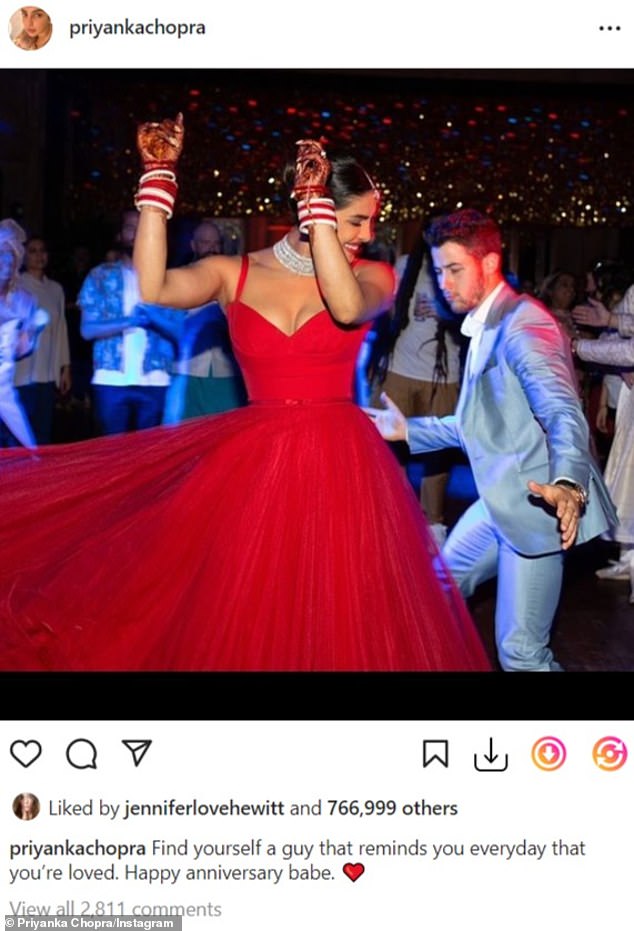 Anniversary! Priyanka and Nick recently celebrated their fourth anniversary and penned special tributes to each other on Instagram

The Quantico actress uploaded a photo of herself donning an eye-catching, red dress as she danced the night away with Nick during their wedding reception.

‘Find yourself a guy that reminds you everyday that you’re loved. Happy anniversary babe,’ she penned to her husband.

The couple tied the knot in December 2018 at the Umaid Bhawan Palace in Jodhpur, Rajasthan, with numerous guests in attendance, such as Nick’s brothers, Joe and Kevin.

Nick also shared his own special message to Priyanka on their anniversary, uploading a throwback photo of the two shortly after saying ‘I do,’ as he planted a gentle kiss on her hand.

‘And just like that it’s been 4 years,’ the Chains singer wrote in the caption. ‘happy anniversary my love.’

‘My love’: Nick wrote a sweet tribute to his wife on Instagram on their anniversary, typing, ‘And just like that it’s been 4 years. happy anniversary my love’ 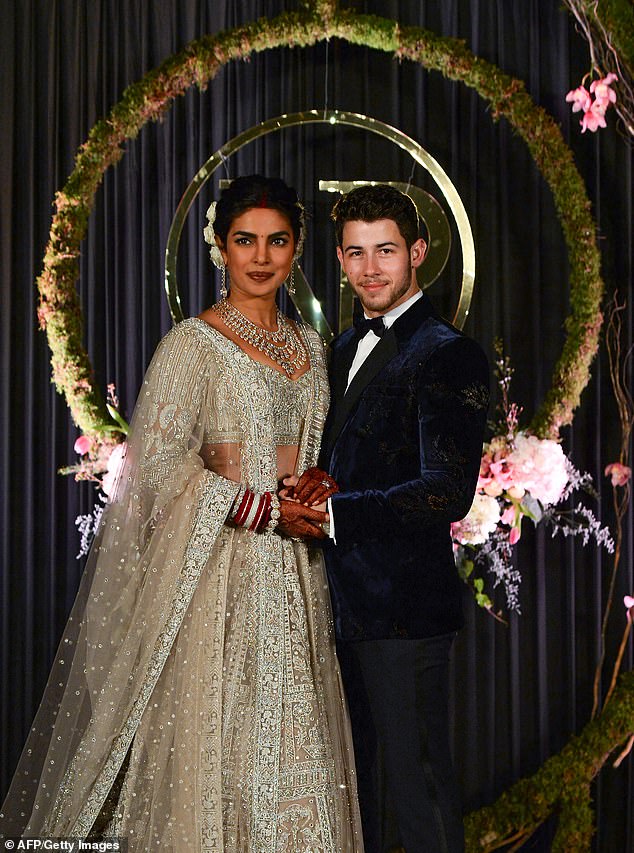 Happy: The couple tied the knot in December 2018 at the Umaid Bhawan Palace in Jodhpur, Rajasthan, with numerous guests in attendance, such as Nick’s brothers, Joe and Kevin 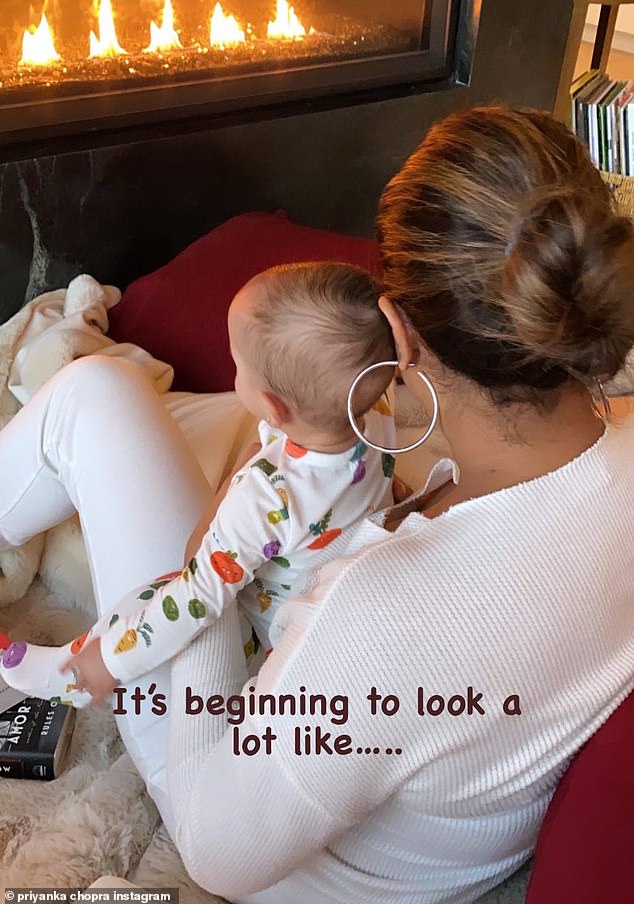 Getting into the spirit: Priyanka shared a cute phot of herself holding her daughter as the two sat near a fire to warm up during the holiday season

Priyanka and Nick announced on Instagram in January that they had welcomed Malti via surrogacy, with their daughter initially having to spend 100 days in the neonatal intensive care unit.

Shortly after Malti was cleared to go home, a source informed E! News that all was well with the family. ‘They really are so in love, like they’re still in their honeymoon phase.’

‘It’s very cute and sweet. Malti is home, and Priyanka is very organized. She knows all the tips and tricks to take care of her,’ the insider added to the entertainment publication.

Nick recently opened up in an interview with Travel and Leisure published last month in November, and expressed that he enjoys traveling with Malti.

‘I mean, travel is definitely different now,’ Nick had admitted, adding that he loved, ‘the wonder of looking for places you’ve been to a million times but seeing it through different eyes.’

The Jonas Brothers star explained that for both Priyanka and himself, the ‘experience’ is ‘really special.’