A group of pro-Palestinian protestors burned an Israeli flag outside of Rockefeller Center as they marched through the streets of midtown Manhattan while demonstrating over businesses with ties to Israel.

The group carrying Palestinian flags and signs saying, ‘None of us are free until all of are free,’ ‘Imagine justice,’ and ‘We will free Palestine within our lifetime.’ They were also filmed chanting: ‘From the river to the sea, Palestine will be free’.’ Some critics claim that line is anti-Semitic because it appears to call for the destruction of Israel.

When the group got to Rockefeller Center, the protesters were seen tearing apart an Israeli flag and setting it on fire, and stomping on it, yelling ‘Allahu Akbar’. One woman was even filmed kneeling down and spraying more accelerant onto the flag in an apparent attempt to get it to burn faster.

Some members of the group were also seen carrying placards saying ‘Abolition Now,’ in an apparent call to dismantle the police.

Then, when they passed the BlackRock offices on 52 Street, two men sprayed red paint to symbolize the blood they claim the business has on its hands.

BlackRock, an asset managements firm, has significant investments in US defense firm Lockheed Martin, which supplies weapons technology to the state of Israel. It is owned by Larry Fink, who sits on the board of MoMA.

One protester was filmed shouting about why the group had diverged on Rockefeller Plaza. Oil baron John D Rockefeller’s mom was one of the founders of MoMA in 1929.

Pro-Palestinian activists are now angry over Fink’s position on the MoMA board. Fellow board member Paula Crown has also been targeted, over her billionaire family’s company General Dynamics. General Dynamics also supplies defense technology to Israel. 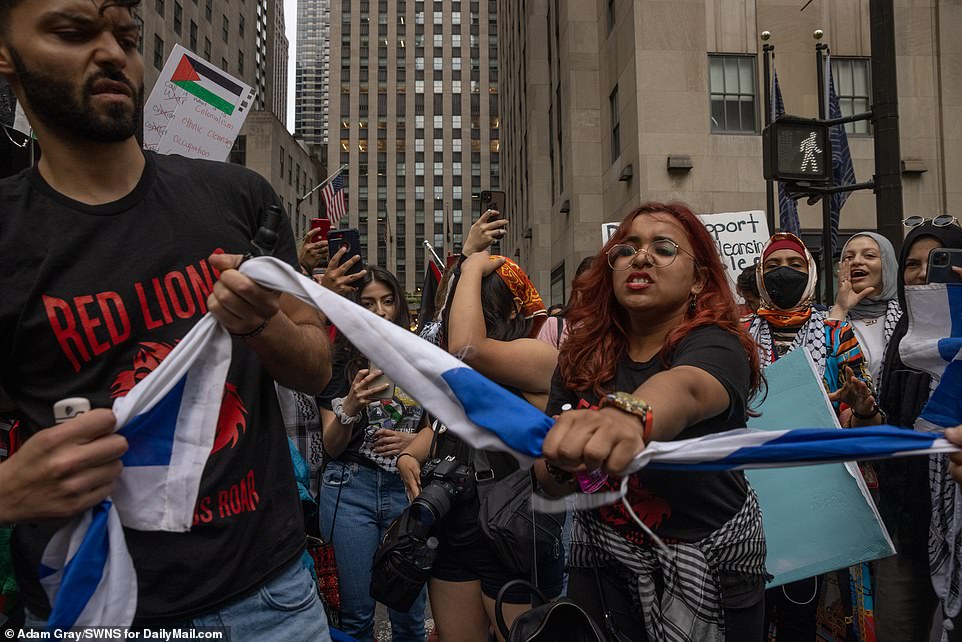 The protesters ripped the flag before they burned it, claiming the Rockefeller’s money helped create the Museum of Modern Art in midtown Manhattan 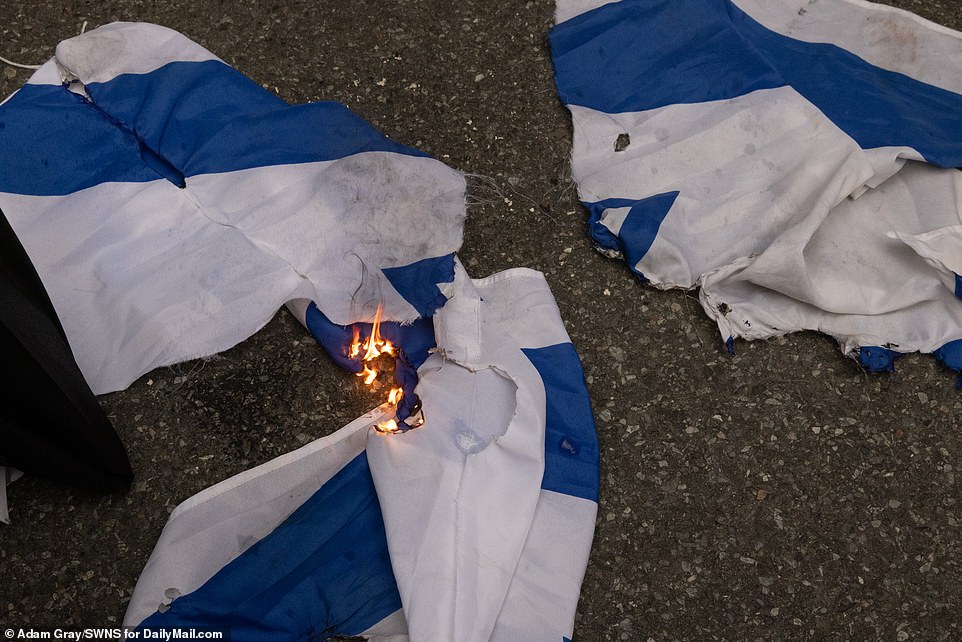 They then let the flag burn on the ground as they chanted ‘Allahu Akhbar’ and stomped on it. The protesters have targeted investment firm BlackRock, and the Museum of Modern Art over board members ties to Israel

Fellow MoMA board member was blasted for being a member of the World Jewish Congress, which protest group Strike MoMA claims ‘has long campaigned in defense of Zionist policies.’ The World Jewish Congress says it works to ensure the safety of Jews worldwide, and to serve as ‘the diplomatic arm of the Jewish people.’

Strike MoMA was last month accused of falsely alleging that another MoMA board member, Steven Tannabaum, after he was wrongly accused of donating money to send young Jewish people to Israel. That $1.8 million gift had actually been used to purchase a piece of modern artwork for the Art Institute of Chicago, The Times of Israel reported. 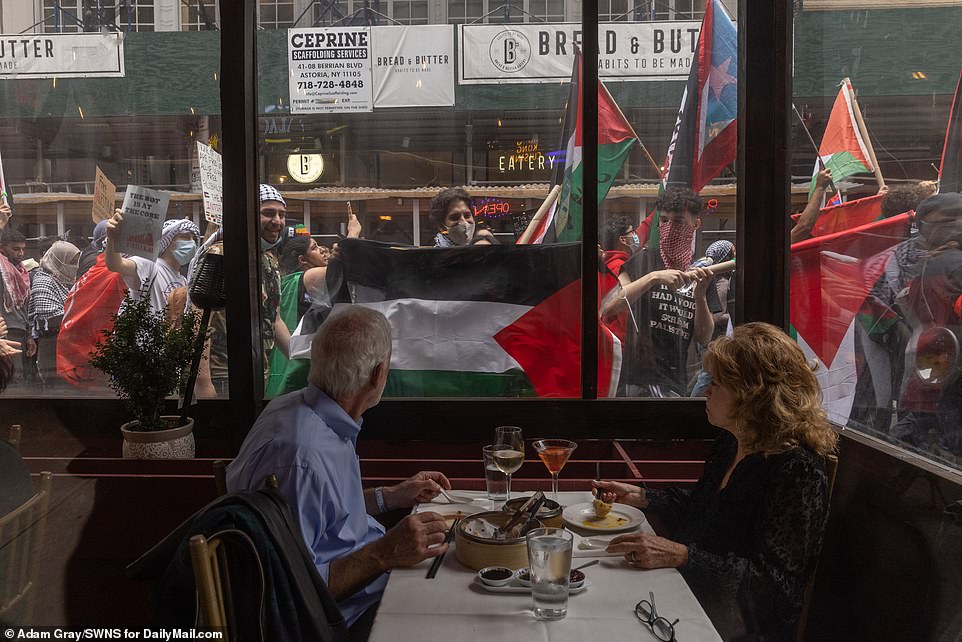 The pro-Palestine protesters passed by a restaurant where a couple was enjoying dinner, and were seen waving flags at them 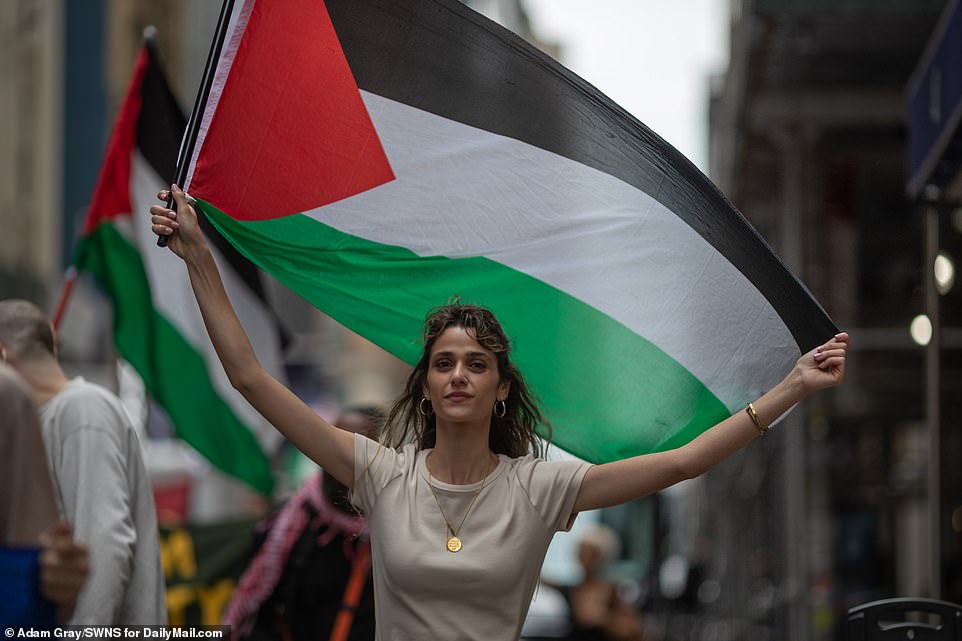 They carried Palestinian flags with them as they marched through the streets of midtown, targeting firms they accused of helping supply Israel with weapons 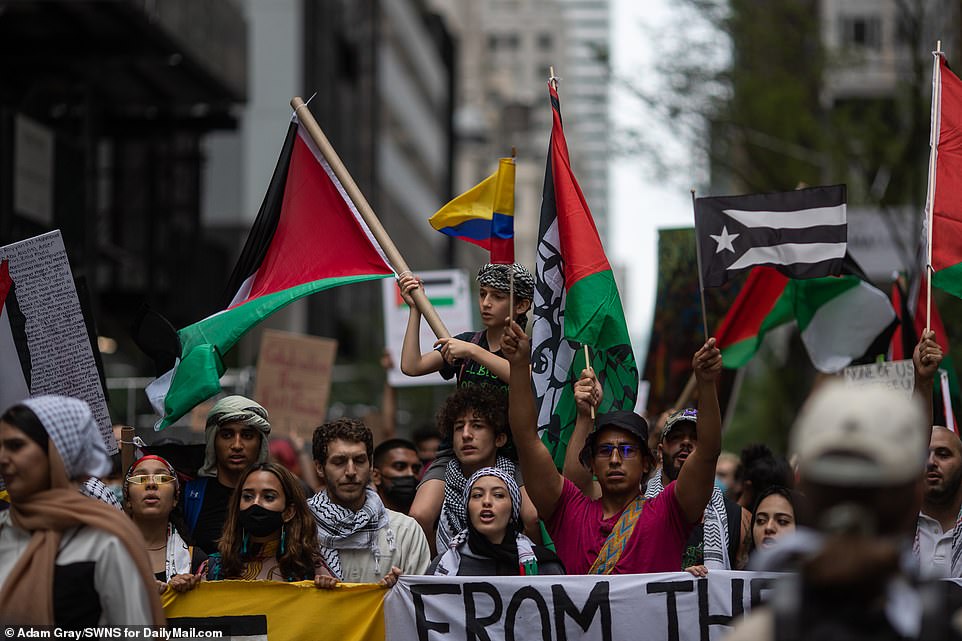 There were several hundred protesters at the #StrikeMoMA protest on Friday, some of whom carried signs as they walked 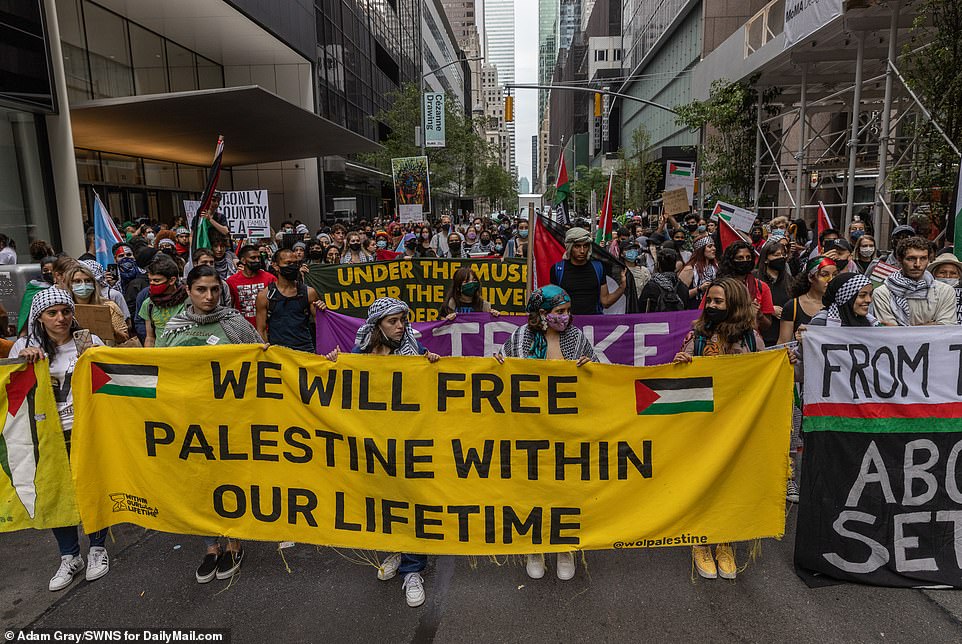 Strike MoMA have been staging weekly protests against the art museum, with five of its members permanently banned after they were accused of harassing a museum security guard during one protest last month. 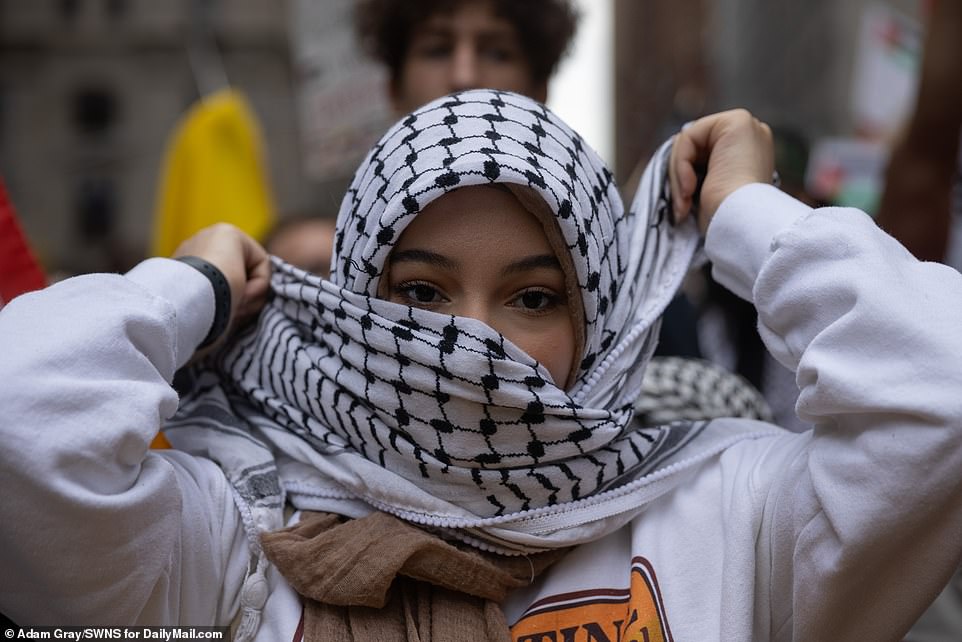 A woman was seen covering her face with a scarf for the march, which targeted Rockefeller Plaza, investment firm BlackRock and the Museum of Modern Art 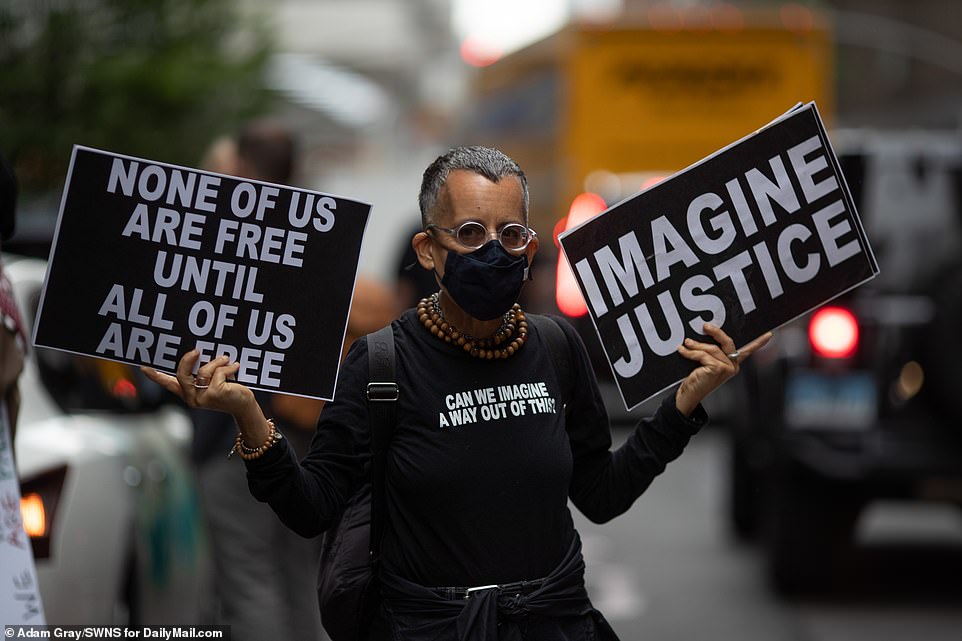 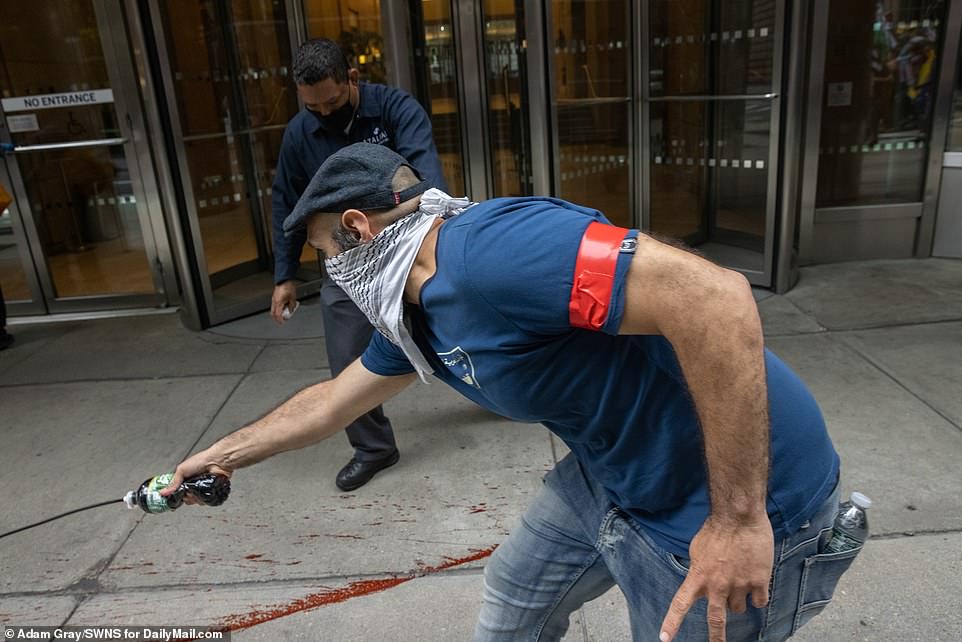 One man took it upon himself to spray red paint in front of the BlackRock offices. The company has invested in Lockheed Martin, which has been supplying the Israeli army with weapons since 1971 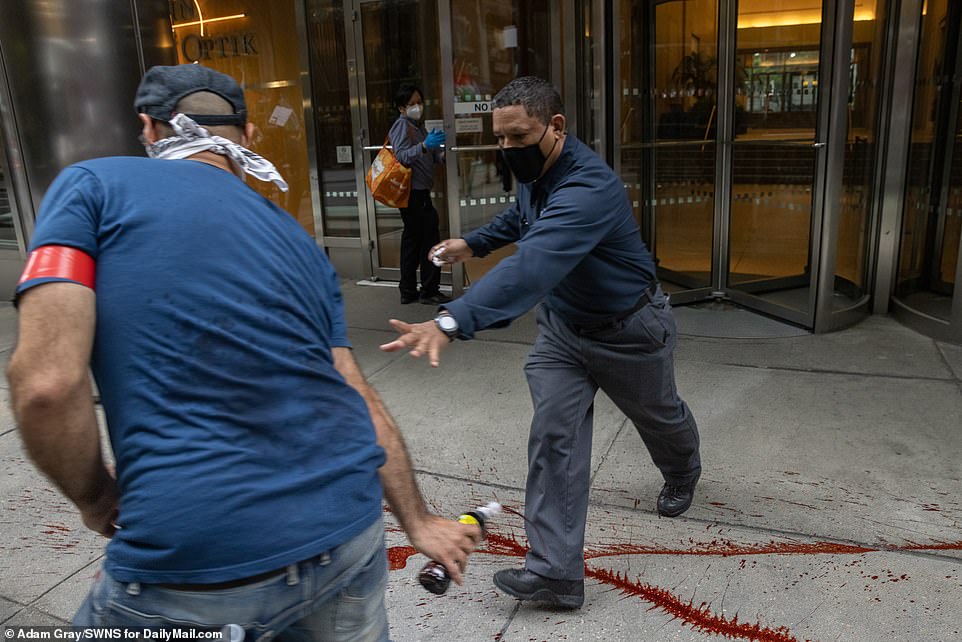 Protesters claim the paint symbolizes the blood BlackRock founder Larry Fink has on his hands over investments in firms which supply Israel with weapons technology. They have also targeted MoMA over Fink’s position on its board 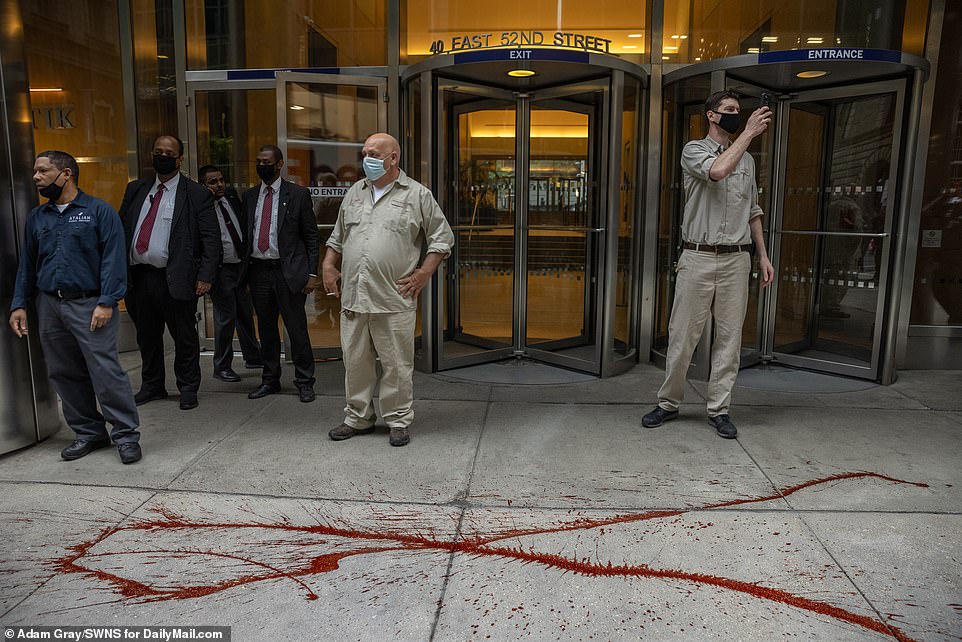 Security guards monitored the situation outside the BlackRock offices on Friday 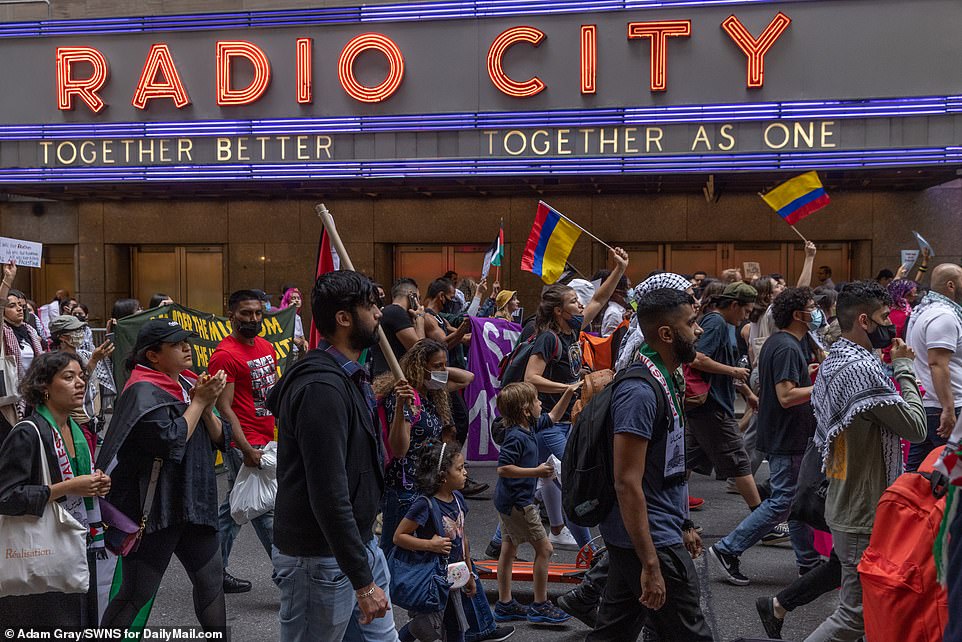 Protesters marched through Rockefeller Plaza, with one man condemning tycoon John D Rockefeller’s mom for setting up MoMA. Activists are angry about investments by MoMA’s board in companies which supply weapons to Israel 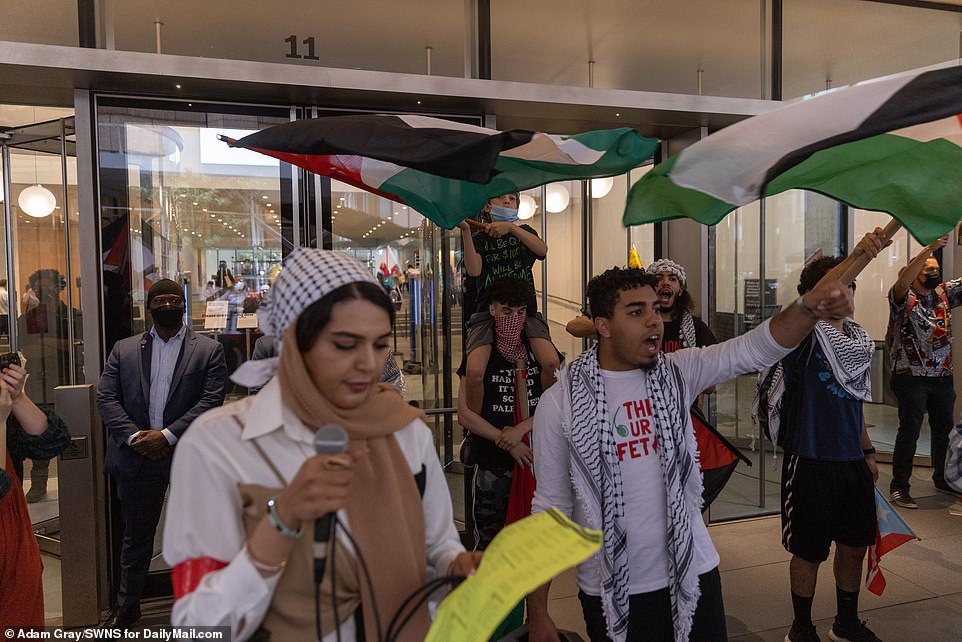 Protesters were seen waving flags and chanting outside MoMA, which last month banned five pro-Palestinian activists for harassing one of its security guards

During 11 days of conflict between Israel and Gaza last month, 243 Palestinians were killed in Gaza, including more than 100 women and children. Twelve people died in Israel.

That conflict – which ended with a ceasefire on May 21 – was also blamed for 75 per cent spike in anti-Semitic attacks on the US. The Anti-Defamation League, which tracks anti-Semitic attacks, says 127 hate attacks on Jews were reported in the two weeks before the conflict, with 222 reported during the fortnight of clashes between Israel and Gaza.

Some of those attacks were caught on camera. In Los Angeles, a convoy of pro-Palestinian protesters was filmed fighting with Jewish diners at a sushi restaurant after allegedly asking if any of them were Jews.

A man in Orthodox Jewish clothing was filmed being chased through a car park by a group driving an Audi SUV. And in New York a man wearing a kippah – the traditional head-covering for Jewish men – was set upon by a pro-Palestinian protester and beaten up.