Processed foods such as pizza make people eat too much, too fast and gain weight, study shows

Scientists have finally proven that ultra-processed junk food causes weight gain – not just raises risks it – according to a new National Institutes of Health (NIH) study.

We’ve known for decades that people whose diets involve a lot of soda, candy, pizza and chips are more likely to overeat and become overweight.

But despite its small size – consisting of just 20 people – the new study claims to have shown that these foods cause consumers to eat too much and gain weight, while healthier whole foods cause people to shed pounds.

The researchers said they aren’t yet sure what it is about processed food that causes over eating and weight gain, but because the two diets they put participants were matched for dietary content, it’s clear the key is in processing itself.

When volunteers ate meals like this one, consisting of quesadillas, refried beans, and diet lemonade, the ultra-processed foods caused them to overeat and gain weight in a new study

Lawmakers in some states have tried to ban ultra-processed foods, documentaries have tried to expose their empty calories, and countless studies have linked them to obesity, diabetes, poorer heart health and shorter lifespans.

Ultra-processed foods have long been a prime target of the battle against the obesity epidemic.

But they’ve never before been proven to actually cause weight gain in and of themselves.

To establish this ground-breaking finding, the National Institute on Diabetes and Digestive and Kidney Diseases (NIDDK) put 10 healthy adult men and 10 health adult women volunteers on tightly controlled diets for a month.

Each volunteer was randomly assigned to one of two meal plans – highly-processed or unprocessed – for two weeks and then switched to the other plan.

A processed breakfast might be a bowl of Honey Nut Cheerios doused in fiber-enriched milk, with the kind of sweating packaged blueberry muffin you might see in a vending machine and some margarine to spread on it.

By contrast, on the unprocessed diet, a volunteer might be served a plain Greek yogurt-based parfait with strawberries, bananas, walnuts salt and olive oil and some apple slices drizzled in fresh squeezed lemon.

Crucially, the scientists made sure that each meal had the same amounts of the same nutritional components – including fat, carbohydrates and protein – and allowed the participants to eat as much of each meal as they wanted.

The primary difference in the makeup of the two meals was that sugar and fat had to be added to the processed meals, while it occurred naturally in the unprocessed ones. 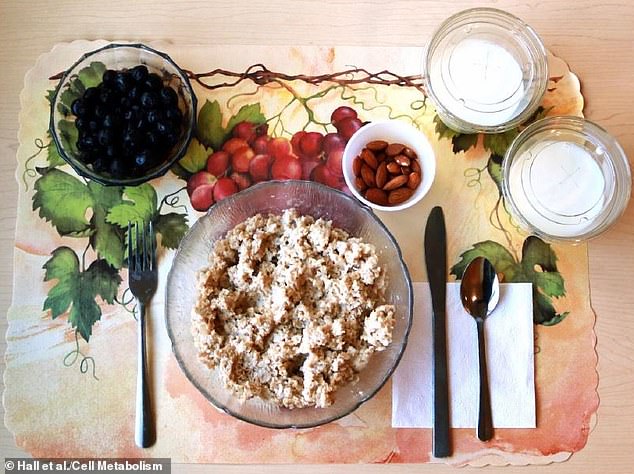 NIH researchers served participants entirely unprocessed meals like this one of chicken salad, blueberries almonds and milk. They had the same nutritional values as the processed meals, yet study participants actually lost an average of two pounds while eating this diet

And the volunteers rated meals on both plans as tasty and satisfying, which the researchers took to mean there wasn’t a question of preference involved in how they ate.

But that’s not what happened.

While on the processed diet, volunteers were more likely to eat more of their meals, and to eat them faster.

The result was that they consumed an 508 more calories and gained about two pounds in two weeks, on average.

By contrast, people lost about the same amount of weight on the unprocessed diet.

‘I was surprised by the findings from this study, because I thought that if we matched the two diets for components like sugars, fat, carbohydrates, protein, and sodium, there wouldn’t be anything magical about the ultra-processed food that would cause people to eat more,’ said lead study author Dr Kevin Hall.

For his part, Harvard University professor of nutrition, Dr Qi Sun, was hardly shocked by the finding.

‘It’s not a surprise, although it is the first study to test the diets physically to extreme ends,’ he says.

‘It further expands the evidence by showing in a clinical trial setting that even if you have a similar proportion [of nutrients], if you eat just highly processed food, you have more energy intake because you eat faster.’

Speed was an important explanatory factor to the differences in weight gain. 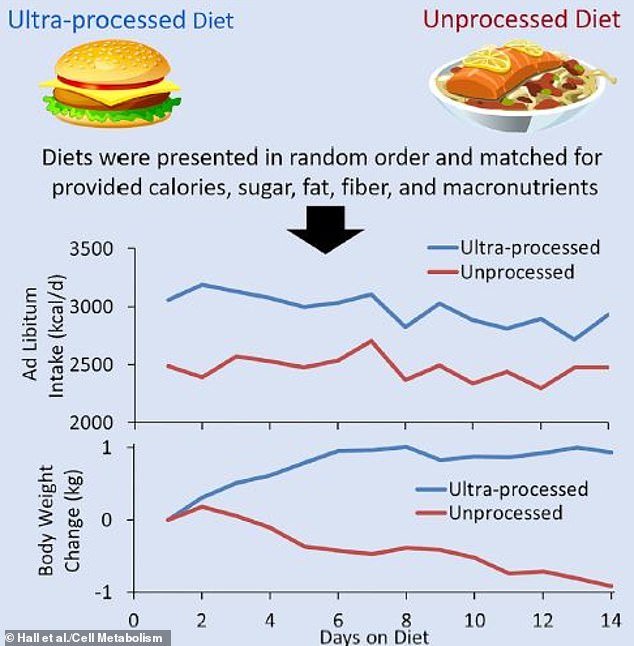 During their two weeks on ultra-processed diets, study participants ate more and gained weight (blue) but lost just as much on the unprocessed diets (red), the graphs show

‘You need time to masticate, to chew the unprocessed food,’ like chopped vegetables or nuts, Dr Sun says.

‘But processed food you don’t have to chew, you just swallow the food, quickly, so you’re overeating and getting more energy intake.’

Plus, each bite of the processed meals was more ‘energy dense,’ meaning it had more calories, so volunteers ended up eating more bites of more calorically dense foods faster.

‘If you’re eating very quickly, perhaps you’re not giving your gastrointestinal tract enough time to signal to your brain that you’re full. When this happens, you might easily overeat,’ explained Dr Hall.

Dr Sun underscores that, although the results of the new study are ‘very meaningful,’ the test diets are not representative of the real world, where most people eat a mixture of processed and unprocessed food.

Although the study may provide leverage to push for policies that encourage less processed food in controlled environments like school cafeterias, Dr Hall is careful to note that we shouldn’t be too quick to condemn those that eat processed foods.

‘We know there are a lot of factors that contribute to why someone might choose an ultra-processed meal over an unprocessed one,’ he said.

‘For people in lower socio-economic brackets especially, we need to be mindful of the skills, equipment, knowledge, and expense needed to create unprocessed meals.’