Jacinta Price – the lead Country Liberal senate candidate for the Northern Territory – stood alongside a smiling Scott Morrison at a press conference in Alice Springs on Sunday when she publicly backed the Sydney mum-of-three.

Ms Deves was selected by the Prime Minister to run for the key seat of Warringah against independent MP Zali Steggall, and believes trans women have physical advantages and shouldn’t compete against biological women.

However, she came under fire last week for a series of comments on her now-deleted Twitter account, including comparing her Save Women’s Sport movement to standing up against the Holocaust.

‘Why do you support Katherine Deves, and would you support those remarks if she was talking about indigenous Australians?’ a reporter asked Ms Price on Sunday.

Ms Price replied: ‘Let’s get this straight – I support women and girls in sport.

‘I have been a captain of several AFL football teams here in Central Australia – I know what the impact would be.

‘The girls here put on a hard hit playing AFL but, if you have to be up against a bloke, that’s potentially life-threatening.

‘Being pro-women is not anti-trans, as far as I’m concerned.’

Ms Deves last week apologised for the language she used when expressing her views on social media, but did not overtly apologise for any offence she may have caused. 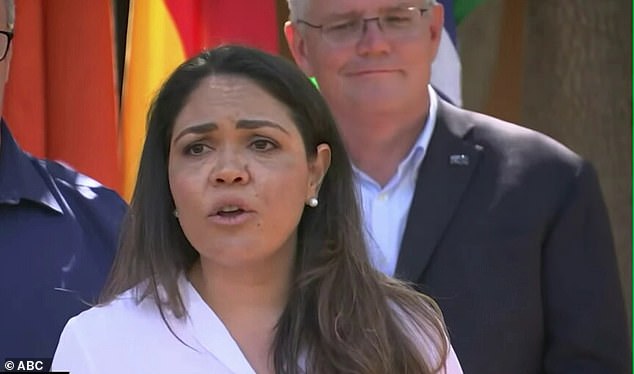 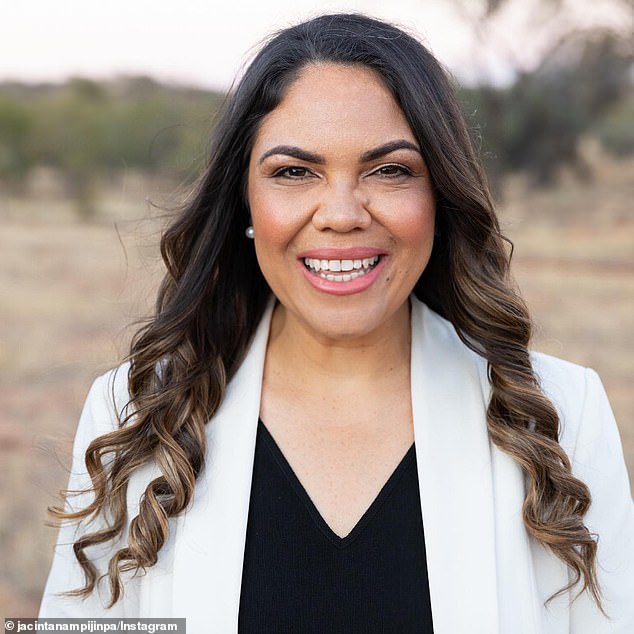 On Sunday, another reporter asked Ms Price if she agrees with the way Ms Deves expressed her views.

The senate candidate said: ‘I agree with her standing up for women’s rights.’

‘And her language?’ the reporter interjected.

Ms Price continued: ‘Her language on standing up for women’s rights, I agree with.’

‘She likened transvestism to serial killing and sexual predation,’ the journalist said.

‘She’s also made comments about Nazi Germany and has refused to respond to invitations from Jewish Australians to attend a holocaust museum to learn from her mistakes.’ 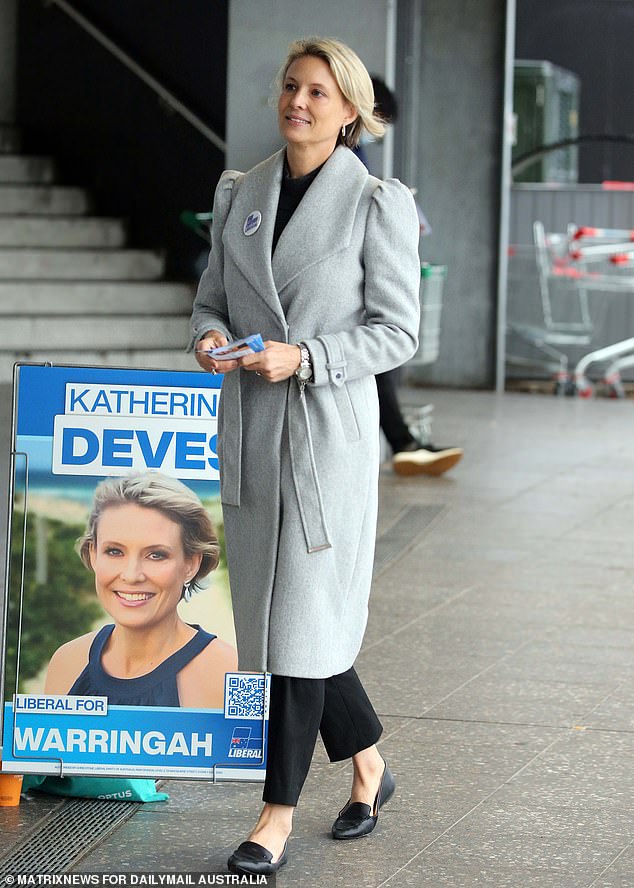 Ms Deves continued on the Warringah campaign trail on Friday, speaking to members of the public at a bus depot on Friday morning 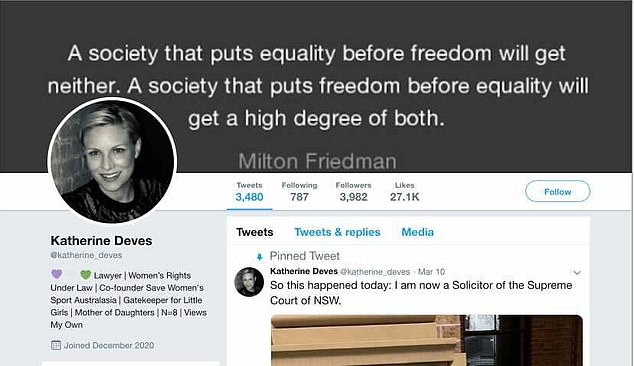 Pictured: Katherine Deves’ Twitter profile, before she deleted it. According to her bio, she’s a ‘gatekeeper of little girls’

Ms Price brushed those comments off and said ‘Well, I guess you’ll have to take that up with Katherine Deves and common sense’.

Beyond her comments early last week, Ms Deves has managed to dodge all questions relating to her deleted tweets.

She has repeatedly refused to comment when approached by Daily Mail Australia.

Ms Price added that if the majority of people don’t support a white Australian woman from the Sydney’s affluent northern suburbs, the voices of marginalised women will be lost.

‘If we don’t stand up for women like Katherine Deves, the voices of other women – marginalised Indigenous women, voices of ethnic women who deal with their own cultural issues when it comes to patriarchal cultures, they don’t get to have a voice, either,’ she said.

It’s not the first time the senate candidate has backed the Liberal hopeful – last week she deployed posters with a photo of her and Ms Deves together, with the caption: ‘Kathrine Deves is a champion for women’s rights.’ 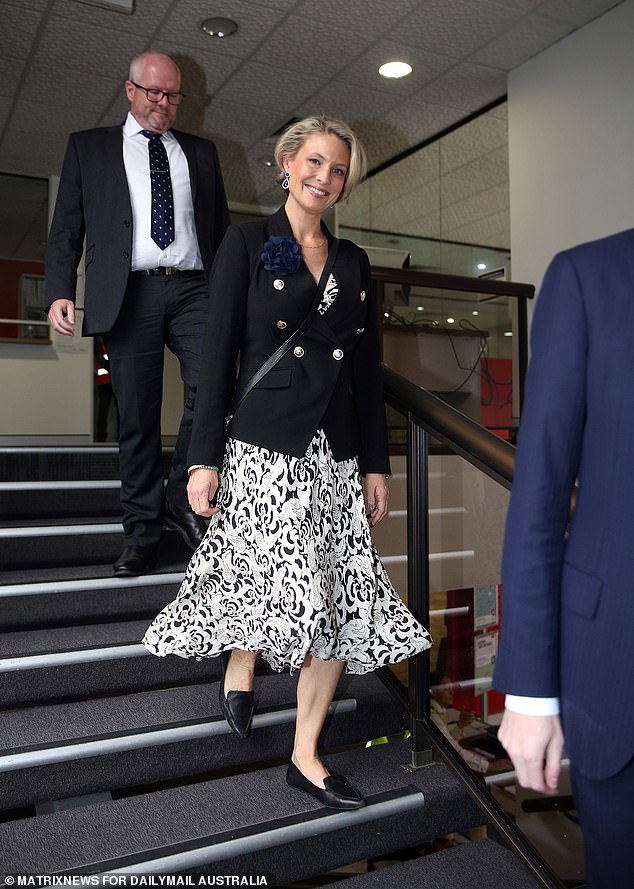 Ms Deves’ name was drawn as fifth candidate on the ballot card on Friday. She is pictured leaving the Australian Electoral Commission office after the ballot draw

‘However, the language I used was not acceptable, and for that I apologise.

‘My commitment is to continue listening to the views of people in Warringah, and the broader community – I will do this in a respectful way.’

Earlier this week, Mr Morrison stood by his ‘captain’s pick’ and said Ms Deves would make a ‘great member of parliament’.

‘She is standing up for women and girls and their access to fair sport in this country,’ Mr Morrison said.

‘She has learned in her advocacy in her private life there are better ways to do things to take things forward as a Member of Parliament.

‘I believe that is how she will approach the task if she is elected as the member for Warringah, and I don’t think she should be silenced.’

However, he has since been urged to reconsider the endorsement.

Ms Deves will continue to run as a candidate after her name was drawn as fifth on the ballot card on Friday.