The number of property transactions plummeted by 63 per cent between June and July of this year, as the end of the main stamp duty holiday caused demand to fall off a cliff.

There were 73,700 property transactions during July on a seasonally-adjusted basis, according to official figures from HMRC, a fall of almost two thirds month-on-month.

This was after the number of homes sold in June hit the highest level on record ahead of the cut-off, highlighting the stranglehold that the tax break has had on the housing market.

Cut-off: The number of property transactions dropped by around two thirds in July, after the stamp duty holiday came to an end and buyers lost the chance to save £15,000

Without seasonal adjustment, the data shows 82,110 transactions or a 61.5 per cent drop.

The stamp duty holiday allowed buyers to save £15,000, as they were not required to pay stamp duty on the portion of any property purchase under £500,000. This ended on 1 July when the nil-rate band was reduced to £250,000, meaning a maximum saving of just £2,500 which will last until 30 September.

In its statement, HMRC described the drop in transactions as an ‘expected but noticeable decrease’.

The figure was still 4.2 per cent higher than July 2020, when the UK had recently emerged from the first national lockdown and the stamp duty holiday had just been introduced.

While the stamp duty holiday has caused astronomical price rises over the past year, there have been noticeable peaks and troughs tied to its various deadlines.

The holiday had initially been set to end in March 2021 – though it was later extended at the last minute. During that month the expected end caused a surge in transactions to 174,000. 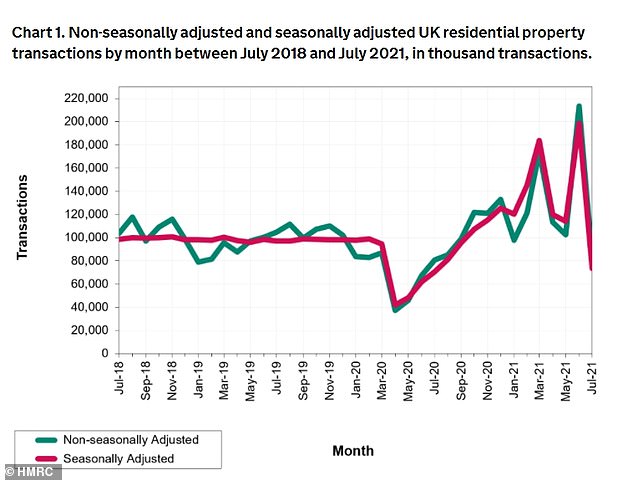 There was then another surge last month as buyers raced to get in under the wire and make the tax saving.

While this month’s figures represented a dramatic drop, experts say the fall was largely expected due to the huge impact the stamp duty holiday had had on the market in the past year.

Anthony Codling, chief executive of property data service Twindig, said: ‘This will lead to many asking if the housing market recovery was built on sand (or a lack of stamp duty) rather than a firmer foundation.

‘However, empirically housing transactions always fall after a significant change in stamp duty as many buyers have pulled forward their purchase decisions to take advantage of the stamp duty benefit whilst it lasts.’

As house prices were pushed up by more than £30,000 by the stamp duty frenzy, many buyers ended up spending more on their homes and negating the tax saving.

‘There was already a crowd of people ready to buy because of changes in how we wanted to live, and pent-up demand from the closure of the market during the first lockdown. 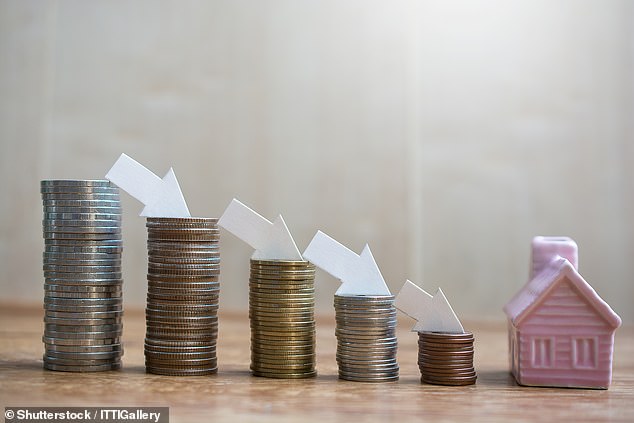 While the maximum stamp duty saving is now £2,500, mortgage rates remain very competitive, which some say could prop up the housing market in the months ahead

‘The tax break just opened a window of eight months, through which this crowd of people tried to squeeze. Eventually this was extended and tapered, but it kept the pressure up.

‘It meant a bulge in property sales, and the fact there were fewer sellers than buyers at a time of such massive demand, pushed prices through the roof.’

Looking forward, some predicted that there would be a more sustainable level of demand in the housing market, particularly as mortgage borrowing remains very cheap.

Tomer Aboody, director of property lender MT Finance, said: ‘It is inevitable that there would be a shift in sentiment from buyers as the initial shock from not being able to take advantage of the stamp duty break takes its toll.

‘But these same buyers will still be looking to purchase and are likely to forget all about the ‘saving’ they missed out on in the next month or two. Cheap mortgages will inevitably help many continue to push ahead with a purchase.’