Protester, 35, is charged with arson for setting fire to the Seattle police precinct in CHOP

A protester who attempted to set fire to a police precinct within the Seattle CHOP area in June has been charged with arson after his family recognized him by the distinctive yellow hoodie he was wearing.

Isaiah Thomas Willoughby, 35, was arrested Tuesday on a federal arson charge that could land him up to 20 years  in prison if he is convicted.

He was identified with the help of his family after he was seen in a video from June 12 starting a small fire at the Seattle Police East Precinct which then lay within the protester occupied zone on Capitol Hill.

The former Seattle resident was caught out by the bright yellow and green hoodie he was wearing from a brand he represents online.

Willoughby allegedly admitted to family members he started the fire and said it was because he was angry about the way he was treated during a prior arrest at the East Precinct, according to the complaint.

Isaiah Thomas Willoughby, 35, was arrested Tuesday on a federal arson charge after he was identified by his yellow hoodie as the protester who set fire to a Seattle police precinct

‘This is the third case we have charged federally for the criminal acts that tainted otherwise peaceful protests. Other crimes remain under investigation and may result in additional federal charges,’ U.S. Attorney Brian T. Moran said in a statement Wednesday.

‘Those who worked to turn protests into riots will not escape accountability for their criminal conduct.’

The area known as the Capitol Hill Organized Protest, or CHOP, was cleared out on July 1 on an order from Mayor Durkin who had declared the ongoing protest an ‘unlawful assembly’.

At least 31 people were arrested in the zone, which became the scene of two deadly shootings and drove crime up by more than 500 per cent in just over three weeks.

According to the criminal complaint filed against Willoughby, he was seen in surveillance video at around 3am on June 12 using a small red can, similar to a gas can, to put liquid on debris piled up beside the precinct before stepping out of the frame.

He returns after 23 seconds with something that he then sets on fire and tosses on the debris pile.

Willoughby, who most recently lived in Tacoma, allegedly then walks away as the debris lights up and the fire starts to scorch the side of the building.

Other protesters used fire extinguishers and pulled the debris away from the building to stop the fire from spreading further.

His actions and those of the other protesters are seen in surveillance footage of the night.

The pile of debris can be seen exploding in flames as Willoughby walks away and the other protesters realize what is happening.

One man begins to shout for water before more urgent cries of ‘fire’ begin and people are seen rushing toward the building. 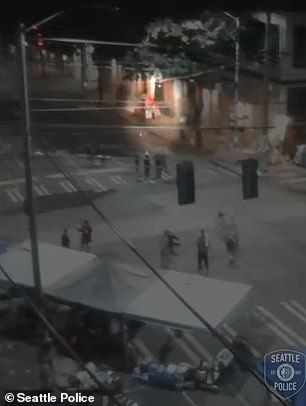 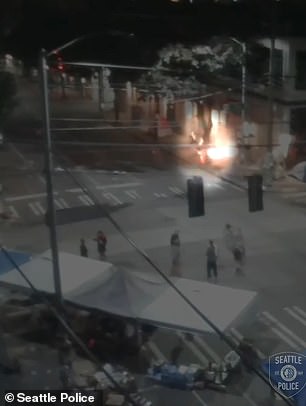 Seattle police released footage from June 12 which showed a protester setting a pile of debris against the Seattle East Precinct alight. The precinct then lay in the CHOP zone 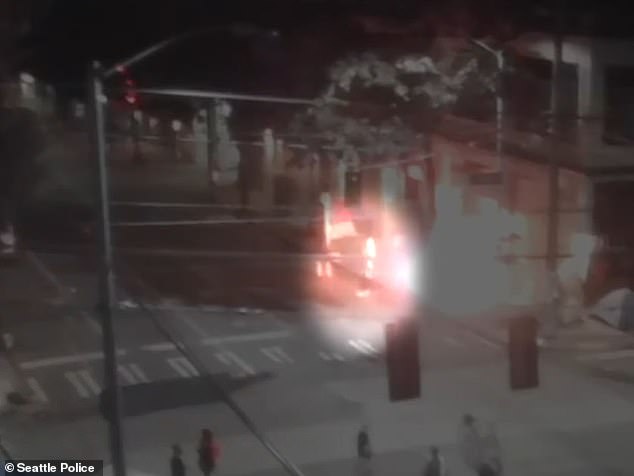 As the debris bursts into flames, the man police say was Willoughby walks slowly away 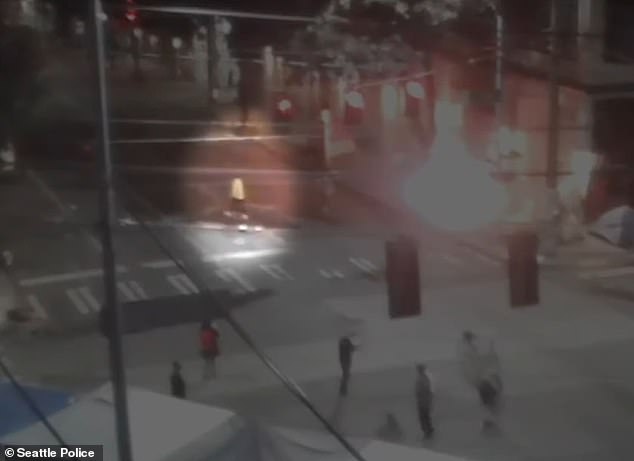 According to the complaint, a female protester followed Willoughby and took his picture so he could be later identified.

She shared the picture online and it was also circulated by the Seattle police department.

Because the area around the precinct was under the CHOP occupation control at the time of the arson attack, the Seattle Police Department was not able to enter to investigate the scene.

However, an undercover police officer did enter the area on June 20 to take photographs of where the fire was started.

The picture taken by the other protester and shared widely on social media helped to catch Willoughby with thanks to the distinctive clothing he was wearing as he sparked the fire. 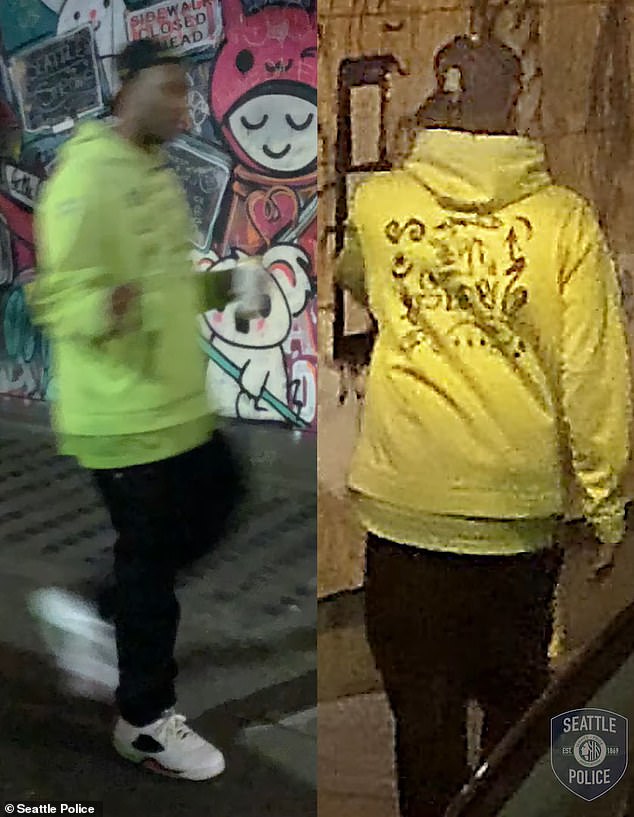 Willoughby’s family contacted police after they recognized this yellow hoodie 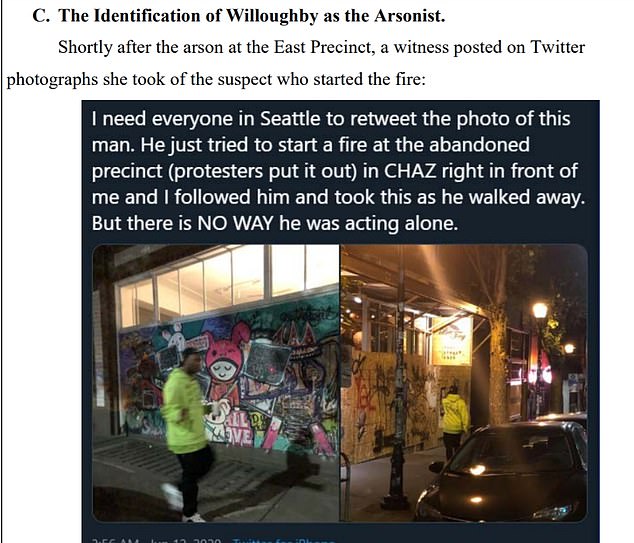 In the surveillance video, he has on a bright yellow sweatshirt with a unique pattern on the back from clothing brand Sneaker Warz.

Willoughby is said to represent the brand on social media and those who know him were quickly able to help police identify him from his clothing.

His aunt contacted the police on June 18 to tell them her nephew had started the fire and confirmed that Willoughby had been in the protest area on the night of the fire. 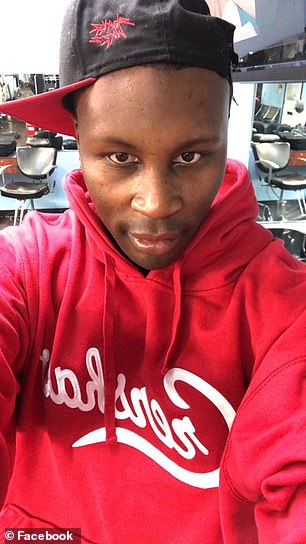 Police charged Isaiah Willoughby, pictured, after finding him linked to the clothing brand being worn by the suspect in the video on his Facebook page

‘The aunt specifically asked Willoughby why he set the fire, and Willoughby replied that it was because he was angry about the way he had been treated by officers at the East Precinct during a prior arrest,’ the complaint states.

‘Willoughby also stated that he had a “lawsuit” about his mistreatment by SPD East Precinct officers.’

The complaint noted that Willoughby attempted to remove social media posts that would have linked him to the fire but left others that revealed his anger at police and his knowledge of the Seattle East precinct.

One Facebook post from June 9 read: ‘This why Iam [sic] on the front lines of this Regime change in America if you support my parties then we need you on this Iam burn it down.’

According to the complaint, Willoughby’s aunt and uncle said that they had witnessed his brother trying to help him delete all the incriminating posts.

His aunt added that Willoughby’s father told her that the 35-year-old had started the fire.

Willoughby was first arrested by Seattle police on June 18 during a search of his residence in Tacoma.

He was charged in state court and arrested again on the federal charge in a Seattle residence this week.

During the initial June search of his Tacoma residence, police found other clothing from the same brand as the hoodie seen in the video surveillance.

The complaint also listed Facebook posts from Willoughby, as pictured above 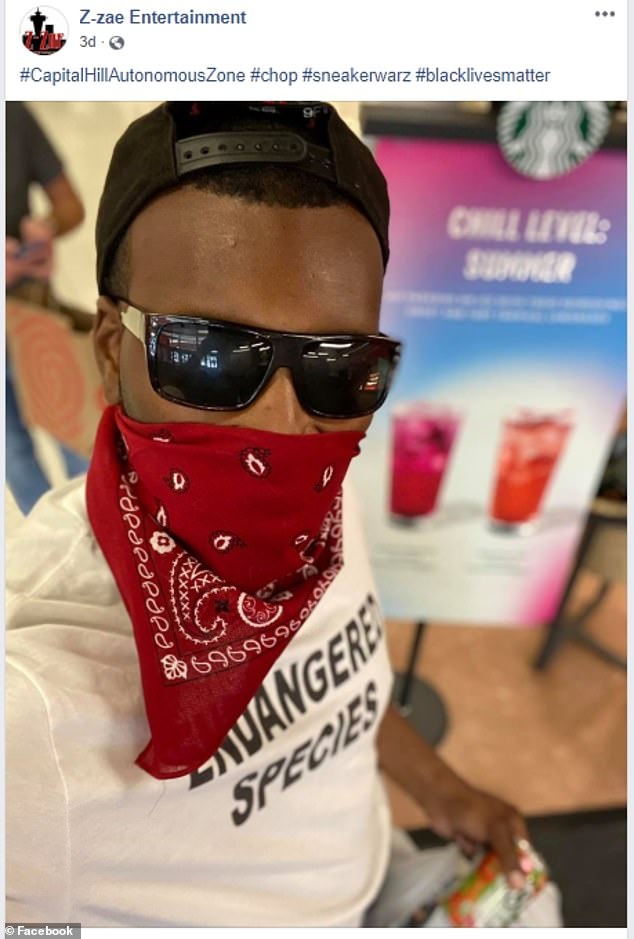 ‘But when someone turns to an act of violence, putting many lives in danger, ATF will work to ensure he or she is held accountable.’

The case is being investigated by the the Bureau of Alcohol, Tobacco, Firearms & Explosives, the FBI and the Seattle Police Department.

The U.S. Attorney’s Office has charged two other defendants with crimes related to the civil unrest in May and June 2020.

Margaret Aislinn Channon is charged with five counts of arson for setting police vehicles on fire the evening of May 30, 2020.

Devinare Antwan Parker is charged with possession of an improvised destructive device for the improvised firearm he brought to a protest on May 31, 2020.

The CHOP zone in Seattle emerged as Black Lives Matter and anti-cop protests mounted across the country throughout early June.

Protests erupted after 46-year-old black father of five George Floyd died during an arrest when white office Derek Chauvin pressed his knee against the man’s neck for close to nine minutes.

The slaying, which cost Chauvin his job and got the ex-cop charged with murder, set in motion nationwide protests, driven by the Black Lives Matter movement and a call for police reform and end to systematic racism.

In Seattle, the CHOP zone was create after people occupied several blocks around a park and the Seattle Police Department’s East Precinct when officers abandoned the building on June 8 following clashes with protesters calling for an end to police brutality.