A large group of demonstrators caused diners to flee when they surrounded a New York restaurant during a protest over the death of Daniel Prude in New York.

More than 1,000 anti-racism supporters gathered together in downtown Rochester, where 29-year-old Prude suffocated to death while in police custody.

The huge crowd surrounded a restaurant where diners were eating on Friday night. Many look terrifed as demonstrators smashed the customer’s glasses in front of their faces, broke plates, overturned chairs and chanted at them to get out.

‘We’re shutting your party down,’ one woman is seen shouting in the face of a diner, in footage taken by FreedomNewsTV.

One woman whose clothing got caught up as she tried to run from the incoming crowd.

‘No need to run,’ a protester told her. ‘Nobody is hurting you. Nobody’s going to touch you…we’re shutting the party down.’

Rochester entered its third protests on Friday over the death of Prude at the hands of Rochester Police Department.

Later, pepper balls were fired at demonstrators, a bus stop was set on fire and authorities declared the event an ‘unlawful assembly.’ 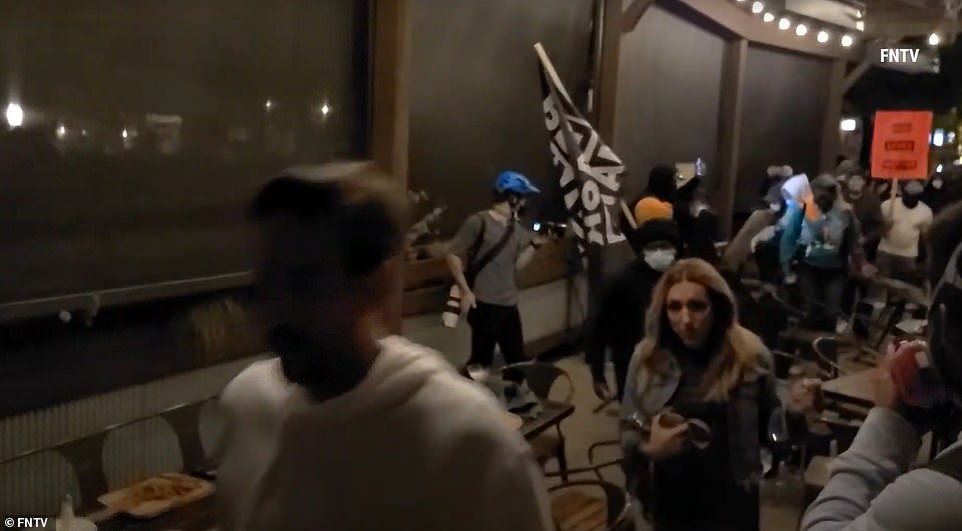 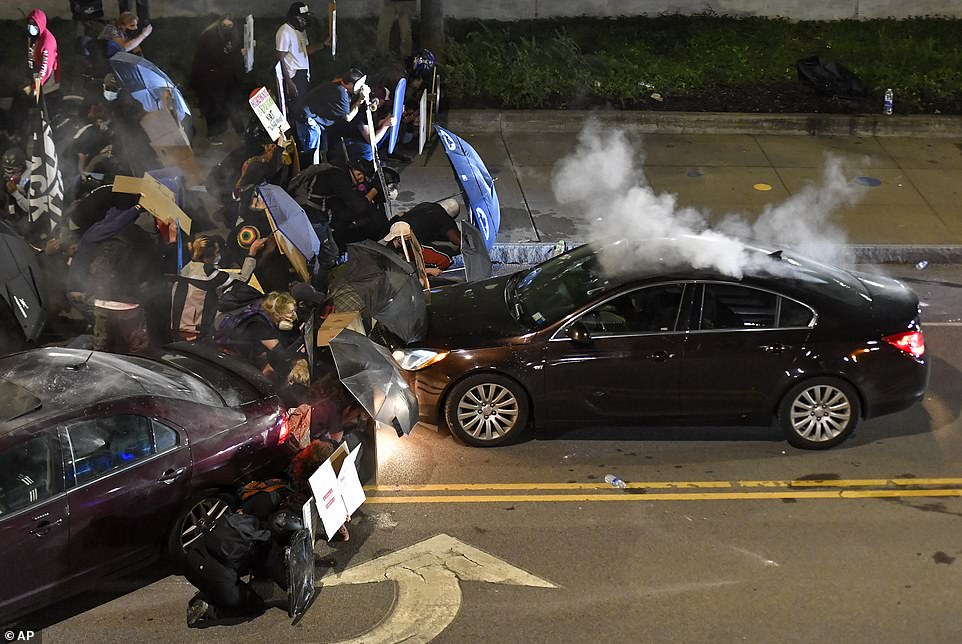 Protests sparked in Rochester, New York, this week after 29-year-old Daniel Prude suffocated in police custody in March, but footage only surfaced recently 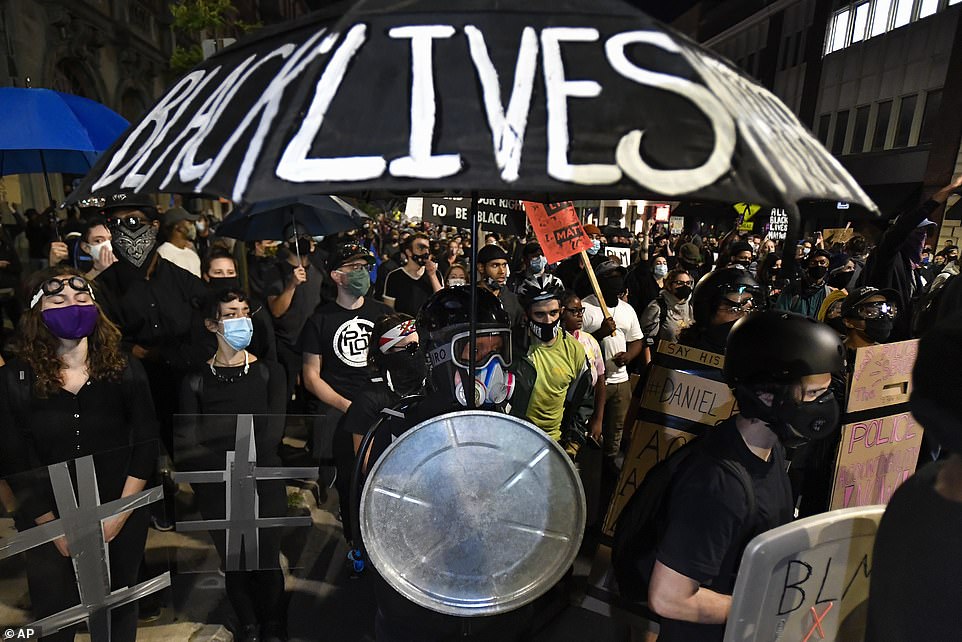 Pepper balls were fired at demonstrators, a bus stop was set on fire and authorities declared the event an ‘unlawful assembly 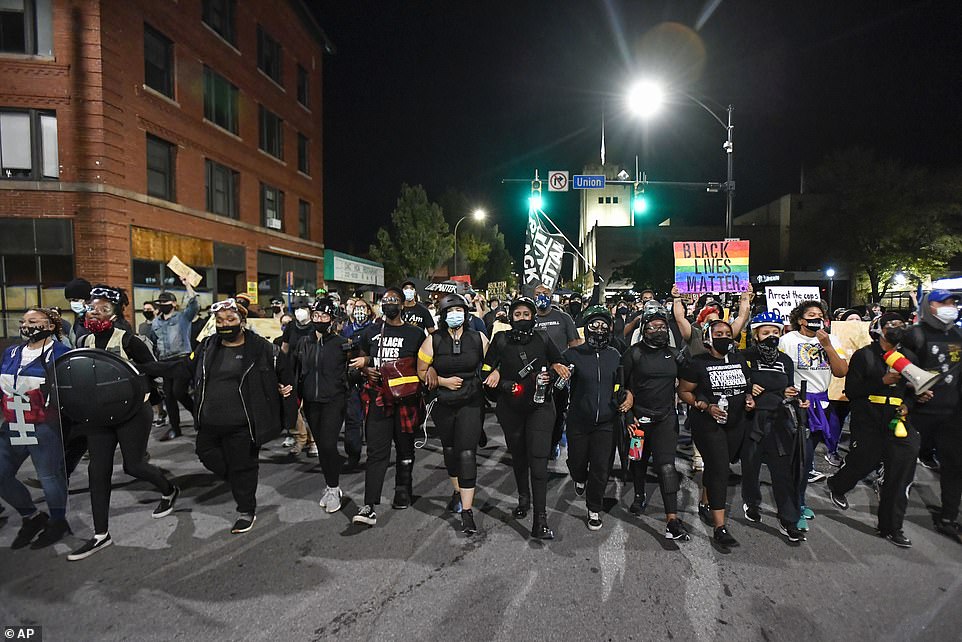 Around 1,000 anti-racism protesters were seen at the event on Friday, with many of them carrying signs and chanting ‘Black Lives Matter’

Rochester First reports that the first few hours were filled with prayer and speeches, including one given by Daniel Prude’s brother, Joe.

As the massive crowed marched down avenues and streets, they chanted, ‘Daniel Prude!’

But as the group turned onto Court Street, they were met with a wall of law enforcement officers waiting.

‘Rochester police has deemed this an unlawful assembly,’ the officers shouted through mega phones at demonstrators. People who stayed behind would be arrested, authorities said. 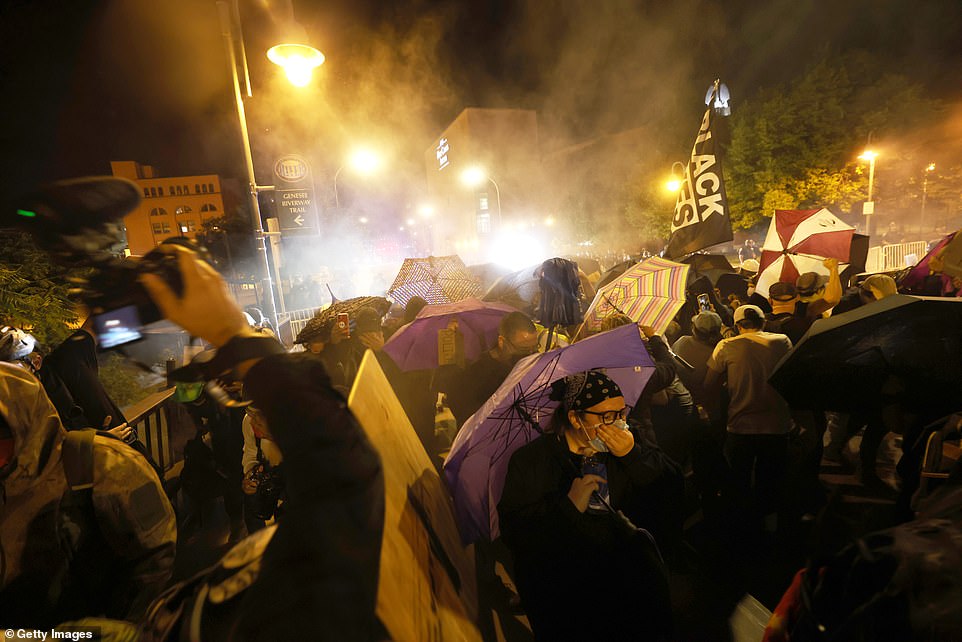 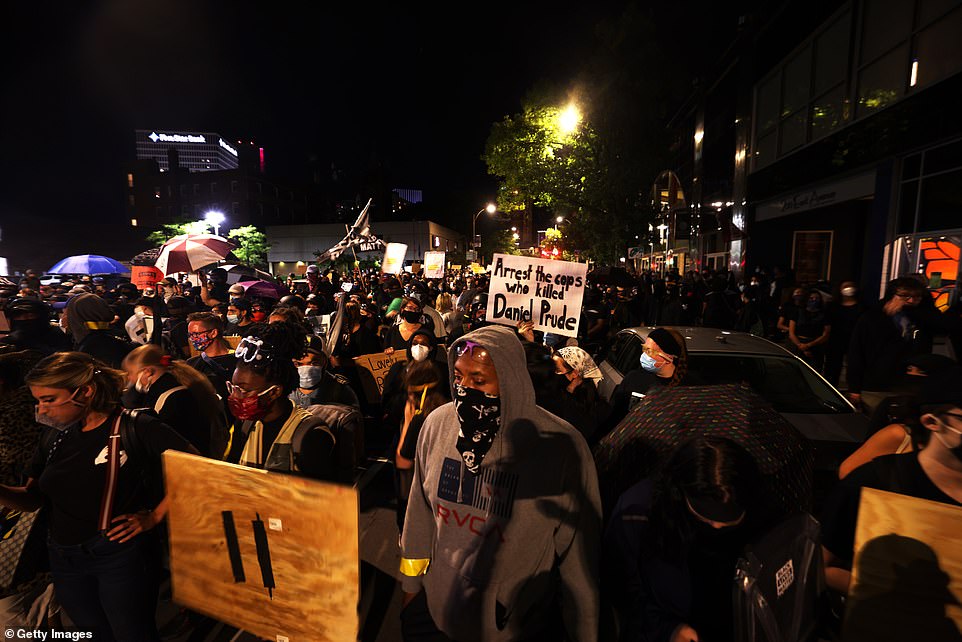 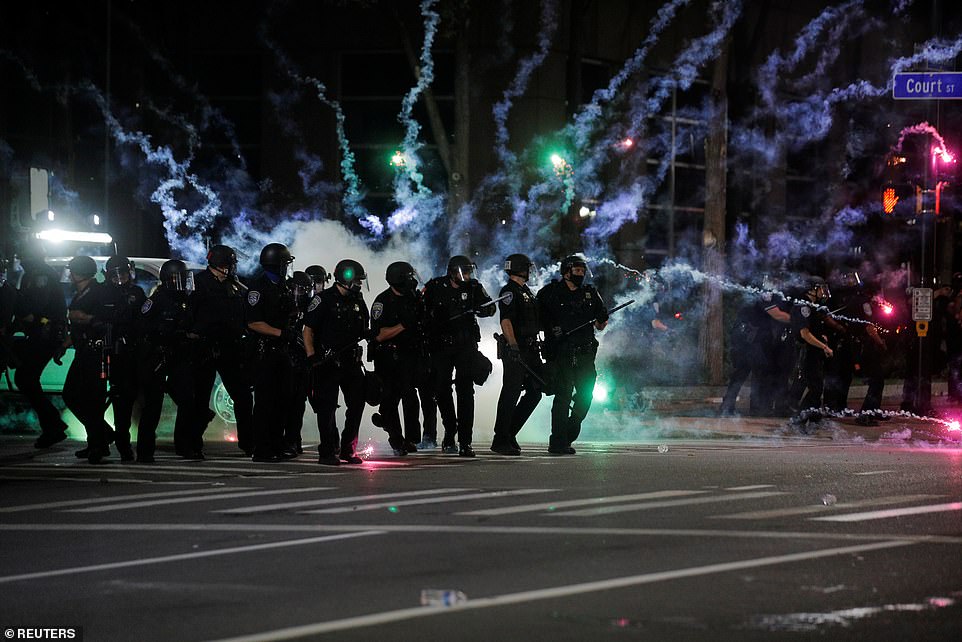 Flares go off in front of police officers during a protest over the death of a Black man, Daniel Prude, after police put a spit hood over his head during an arrest on March 23

Tension between civilians and law enforcement has skyrocketed since the death of George Floyd and other black Americans in custody over the past several months.

His heavy-handed, militaristic approach to quelling protests have created a divide as debates swirl around a number of controversial tools.

Tear gas, as well as non-lethal munitions and pepper spray, have become common site at demonstrations – despite critics calling for a ban on such tactics.

Photos taken at the scene showed protesters using umbrellas, gas can lids and crouching behind cars to deflect from the tear gas.

Those maneuvers are reminiscent of protesters in Hong Kong, who’ve utilized the household item for self-defense and a form of camouflage. 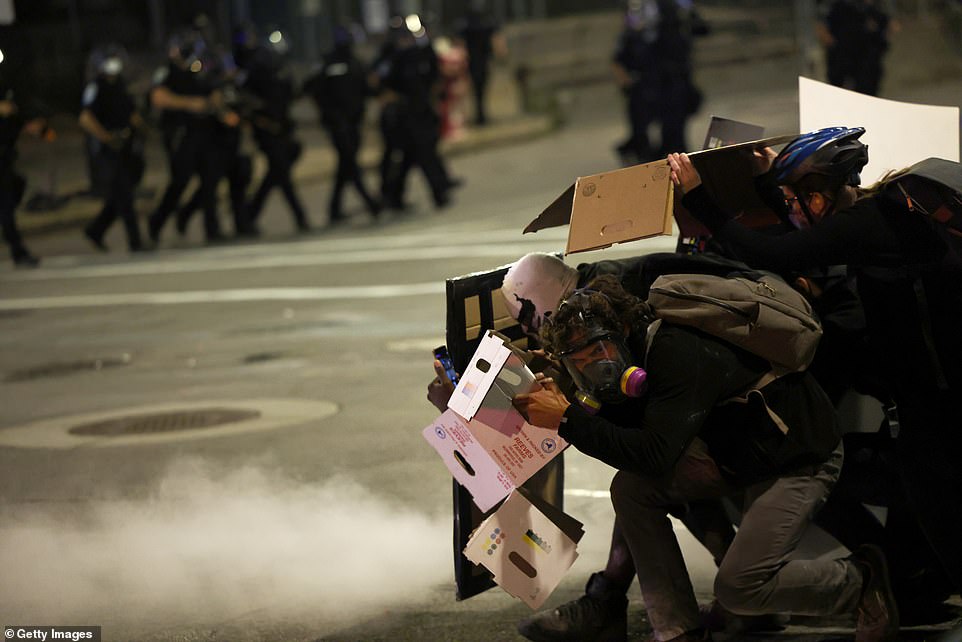 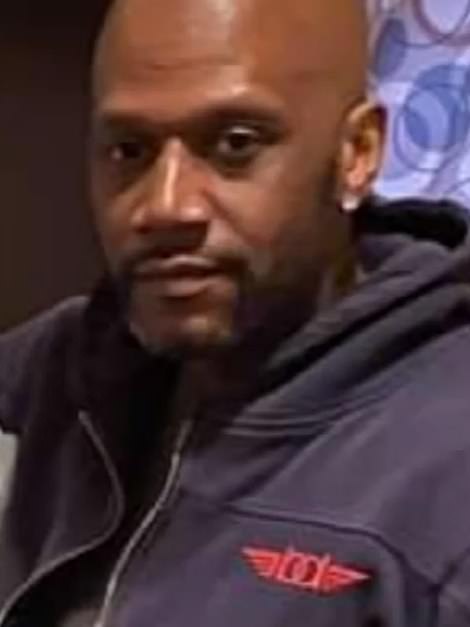 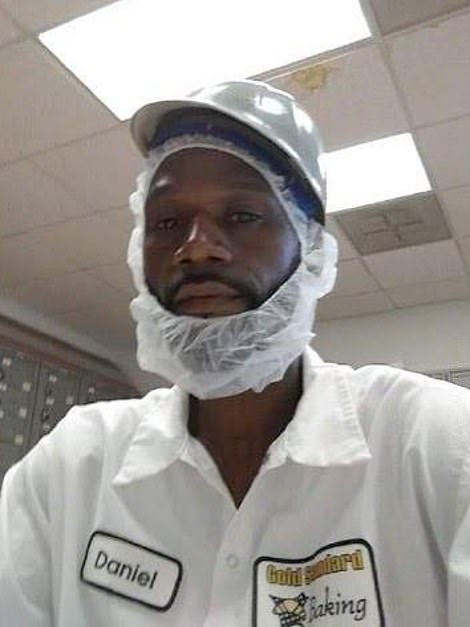 And footage showed that a bus stop was set ablaze as a large group of demonstrators stood down the street.

As of Thursday, all seven officers involved in the death of Daniel Prude were suspended.

Prude was left brain dead after his March 23 encounter with Rochester PD. He died seven days later when he was taken off life support.

Prude’s brother Joe had phoned 911 for assistance as his sibling began suffering a mental health episode.

Prude, who had been visiting Rochester from his hometown of Chicago, walked out of Joe’s house at around 3am in frigid temperatures, wearing only underwear, a tank top and socks. 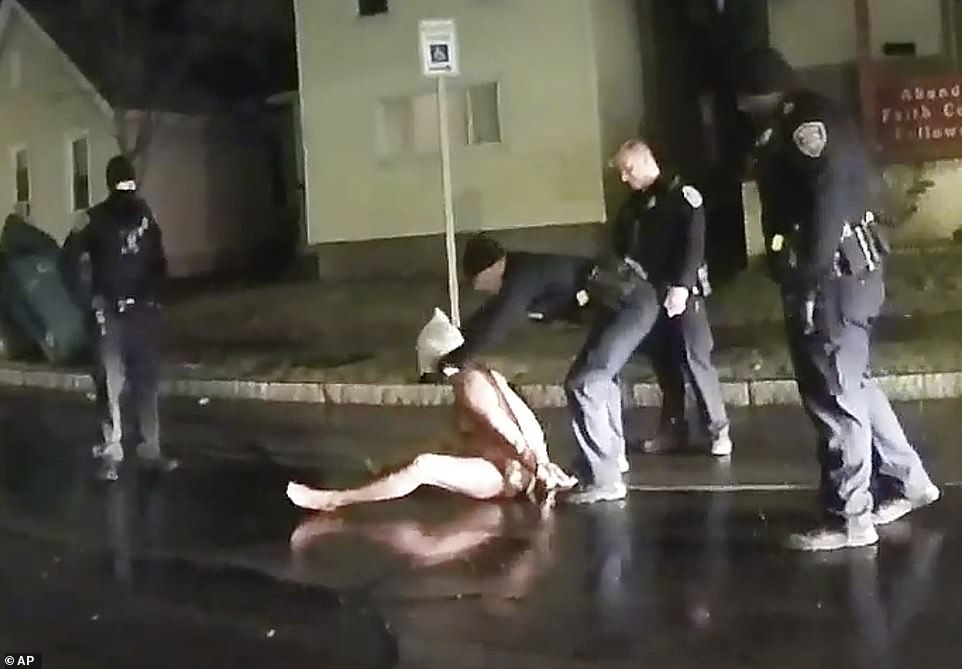 While the fatal incident occurred on March 23 – weeks before George Floyd would die in Minnesota police custody in May, sparking nationwide protests – Prude’s death received no public attention

As he made his way through the neighborhood, he started removing his clothes. Police claim he also smashed windows. Several other people encountered him, with at least one calling 911 to report his erratic behavior.

Officers placed a hood over his head and pressed his face into the pavement until he stopped breathing.

His family shared video of his final moments to the public this week, prompting Mayor Lovely Warren to suspend all seven officers involved in the death. 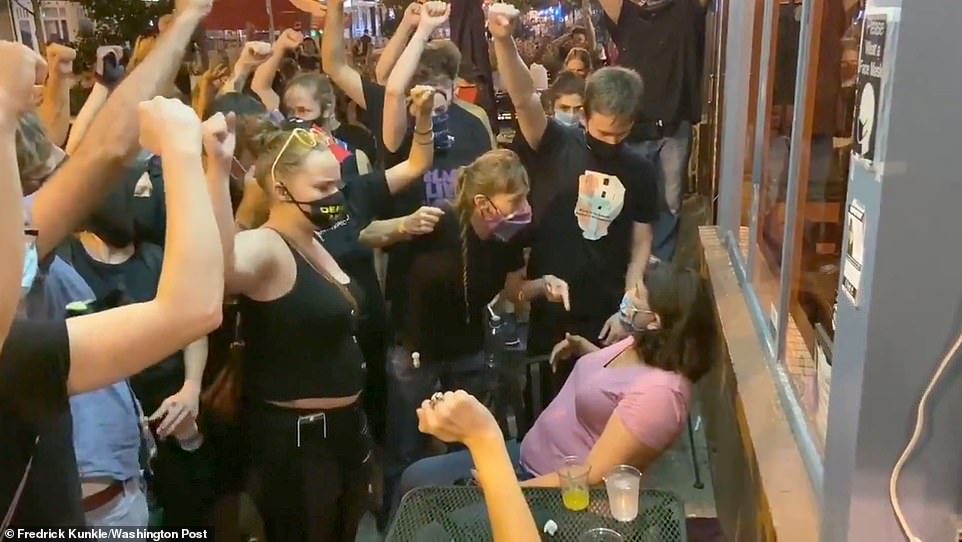 Another woman who was the focus of a viral video when she was surrounded by Black Lives Matter protesters while dining out has condemned their ‘bullying’ tactics and admitted that she ‘felt fear’, but insisted it has not affected her support for the movement 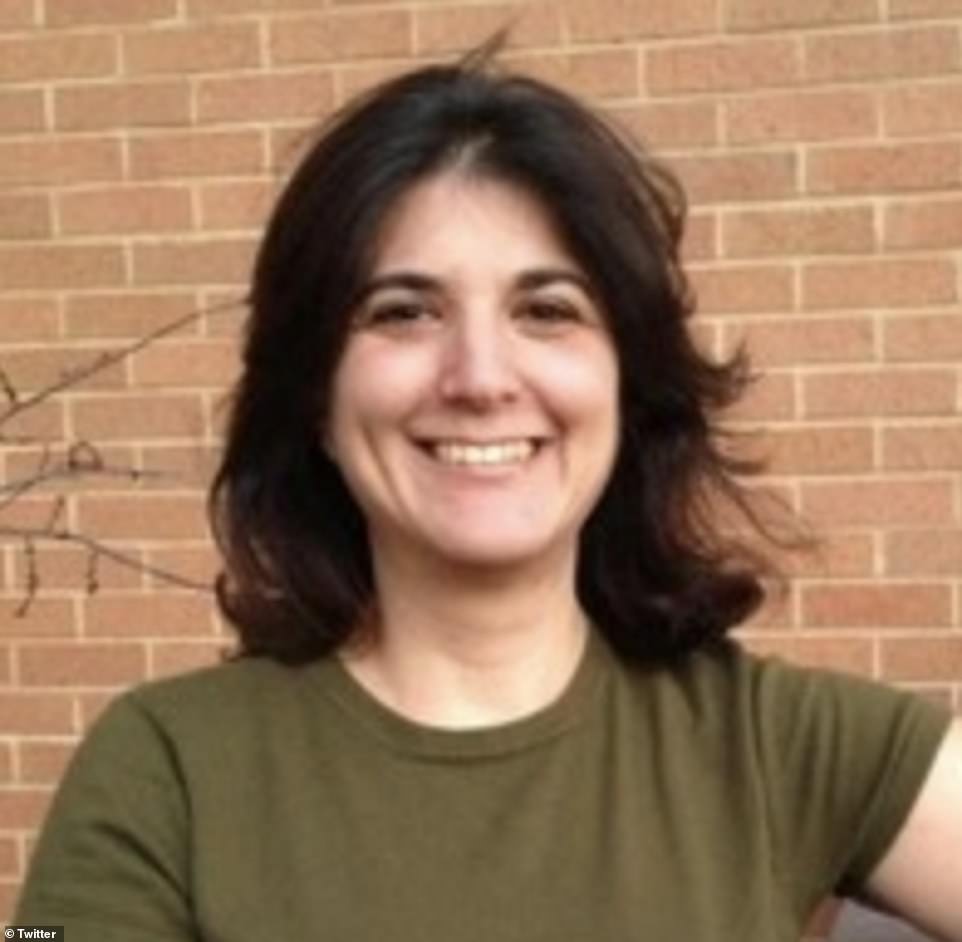 Lauren B. Victor, a 49-year-old urban planner, was aggressively heckled by marchers on August 24

The Monroe County medical examiner ruled his death a ‘homicide caused by complications of asphyxia in the setting of physical restraint’. The report also listed excited delirium and acute intoxication by phencyclidine, or PCP, as contributing factors.

‘I have never shied away from taking action and holding our police — or anyone that fails in their duties in our community — accountable,’ Mayor Warren told reporters Thursday. ‘That is why I am suspending the officers in question today, against the advice of counsel.

‘You cannot stand around and allow these types of things to happen. You have a duty,’ she continued. ‘Mr. Daniel Prude was failed by the police department, our mental health care system, our society, and he was failed.’

Another woman who was the focus of a viral video when she was surrounded by Black Lives Matter protesters while dining out has condemned their ‘bullying’ tactics and admitted that she ‘felt fear’, but insisted it has not affected her support for the movement.

Lauren B. Victor, a 49-year-old urban planner, was aggressively heckled by marchers on August 24, while she was dining with a friend in the Adams Morgan district of Washington D.C.

Writing in the Washington Post, Victor said it was ‘never okay to coerce people’s participation’ and described the tactic as ‘bullying’.

She added that she did not see any protest signs when the group approached her table and it was unclear what they were demonstrating against.

‘I asked who they were and why they were marching. No one would answer me. Why march and hold back your message?’ she said.

Victor, a MBA graduate of Columbia Business School, explained that it was the protesters’ insistence that she participate in something she didn’t understand that stopped her from raising her hand in solidarity.

‘If you want my support, ask it of me freely. That’s what we do in a democracy,’ she said.

She admitted that the video looks ‘scary’ and she had felt ‘fear’ in that moment.

However the experience has not affected her ‘wholehearted’ support for the Black Lives Matter movement and Victor has participated in marches since then.