A few dozen protesters demanding that government leaders take incisive action on climate change have been carried away by police from the main boulevard near the G-20 summit site in Rome.

Hours before the leaders of the United States, Britain, France and other economic powerhouse nations arrived on Saturday for the start of the two-day gathering, the activists blocked the road, holding banners, including one that read, ‘From Rome to Glasgow, your solutions are the problem.’

Some wore death masks and others played soccer with a ball symbolizing the planet’s health on the first day of the summit where climate concerns are a top issue for many of the world leaders in attendance.

On Sunday evening, many of the G-20 leaders will fly to Glasgow, Scotland, for a crucial climate summit.

When the demonstrators refused to budge, police officers lifted them bodily and moved them to a side road, where the protesters continued to lie down or sit on the pavement, blocking traffic.

A demonstrator wears a death mask during environmental protests at G20 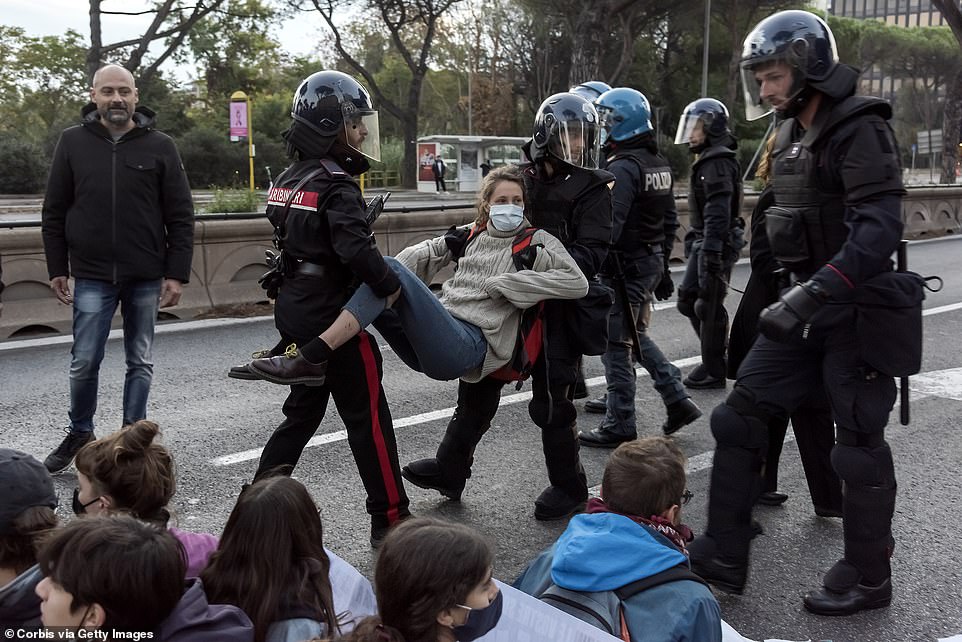 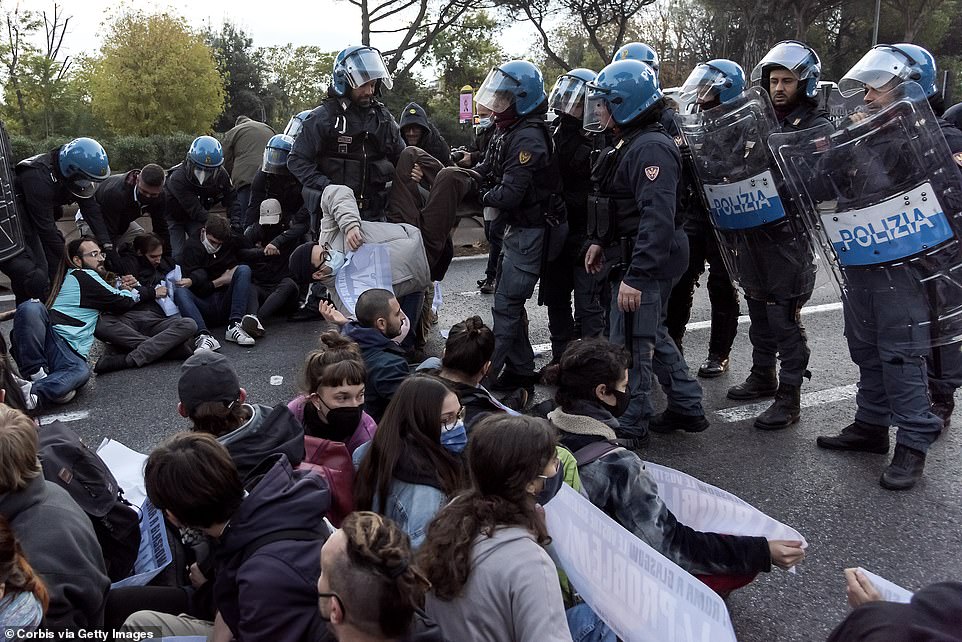 Rome has been put on high security alert from the weekend, with up to 6,000 police and about 500 soldiers deployed to deal with demonstrators 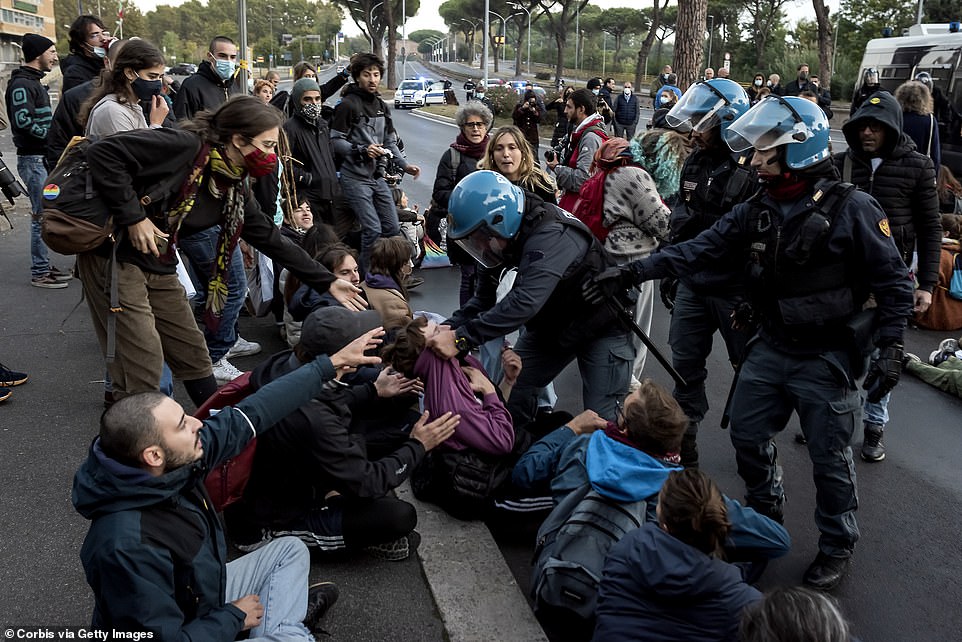 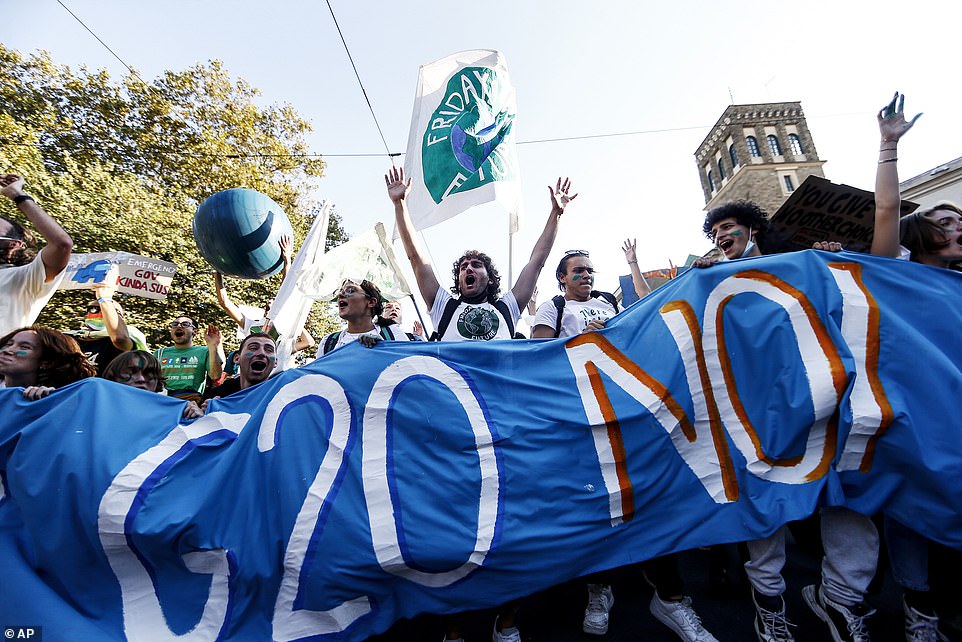 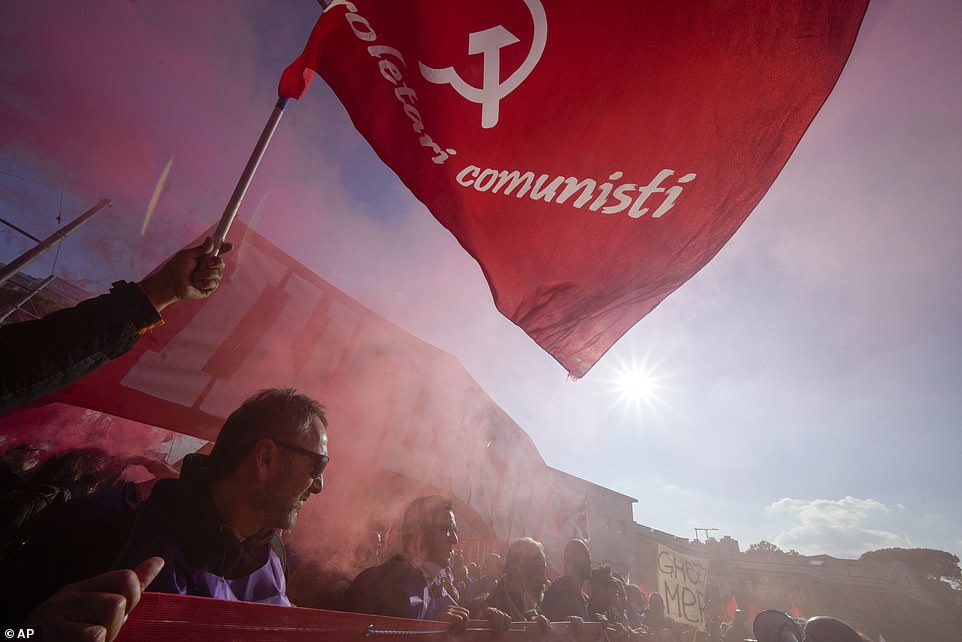 Many of the protesters were encouraging G20 leaders to take action on climate change.

They were marching, singing, dancing and chanting ‘Power to the people!’

Others chanted ‘You are the G20, we are the future.’

Rome has been put on high security alert from the weekend, with up to 6,000 police and about 500 soldiers deployed to maintain order.

Two protest rallies have been authorised during the day, but demonstrators will be kept far from the summit centre, located in a suburb built by the 20th Century fascist dictator Benito Mussolini.

One protest was against Italy’s Prime Minister Mario Draghi’s government. But the second, larger, protest has 5,000 and 10,000 people expected.

President Joe Biden and fellow world leaders were unlikely to see the demonstrators.

Biden arrived at La Nuvola, ‘the cloud,’ in Rome on Saturday to kick off two days of meetings with G20 leaders – their first in-person gathering in two years. He was greeted by Italian Prime Minister Mario Draghi, representing the host country.

The president mixed and mingled with his global counterparts before the formal meetings began.

Biden was spotted chatting with Turkish President Recep Tayyip Erdoğan – who he’s expected to hold a bilateral meeting with once he moves on to Scotland on Monday for the COP26 climate summit – and Macron, who he spent time with Friday.

The president was also seen taking a selfie with healthcare workers, who were welcomed onstage with the leaders as a way to show appreciation for their work during the COVID-19 pandemic.

The ‘overarching theme’ of the day, said a senior administration official Friday night, is ‘The United States is steadfastly committed to our allies and partners and to face-to-face diplomacy at the highest levels.’ 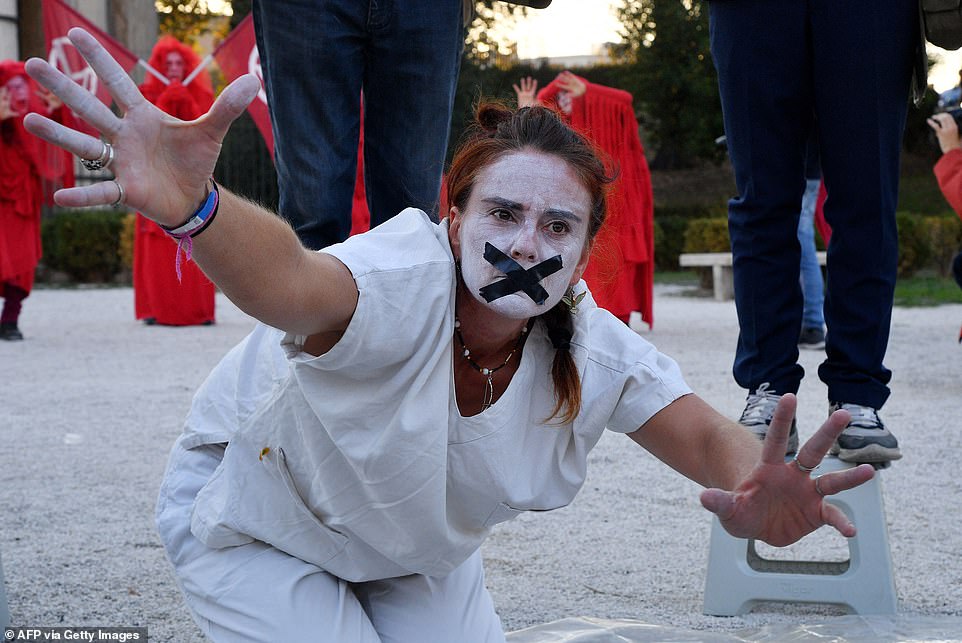 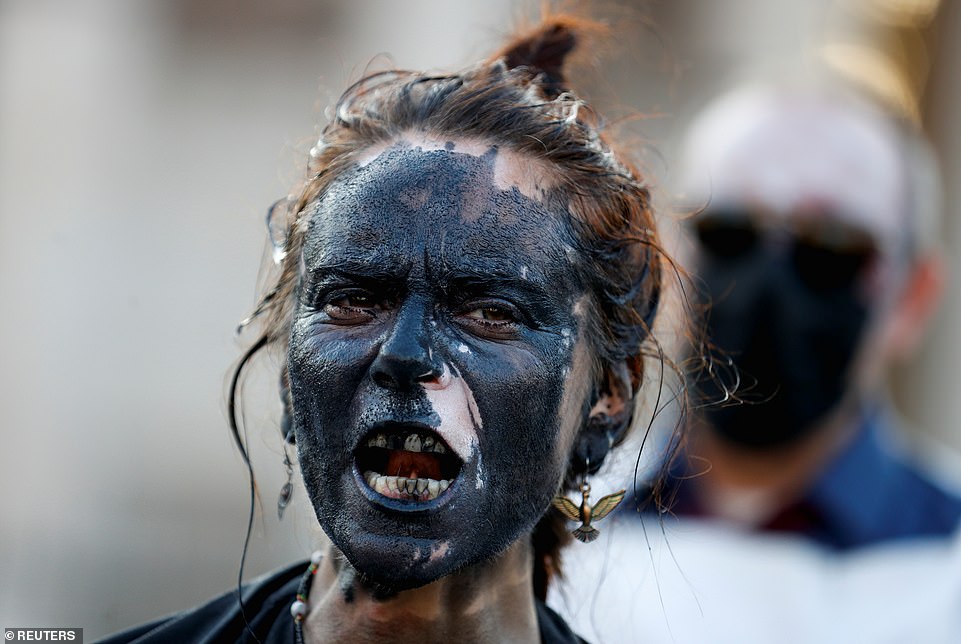 Many of the protesters were there for the environment 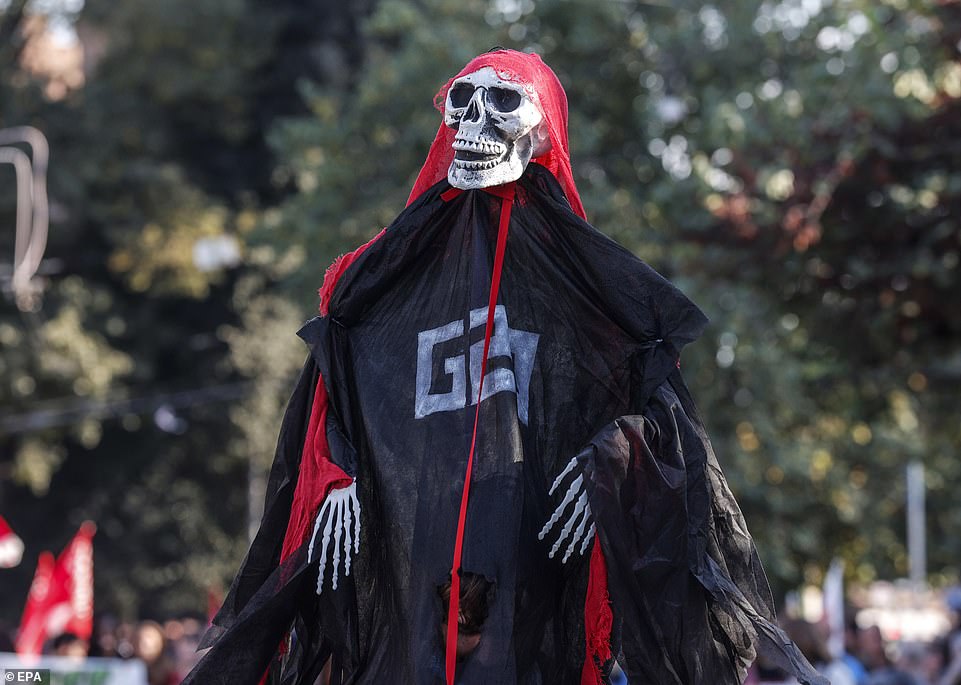 Protesters carried skeletons and painted death masks on their faces 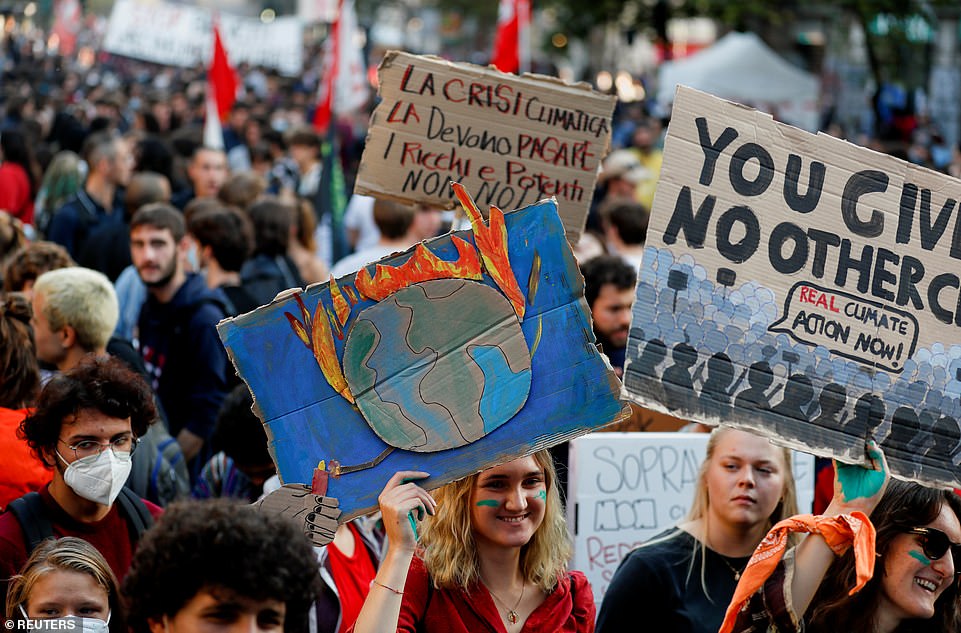 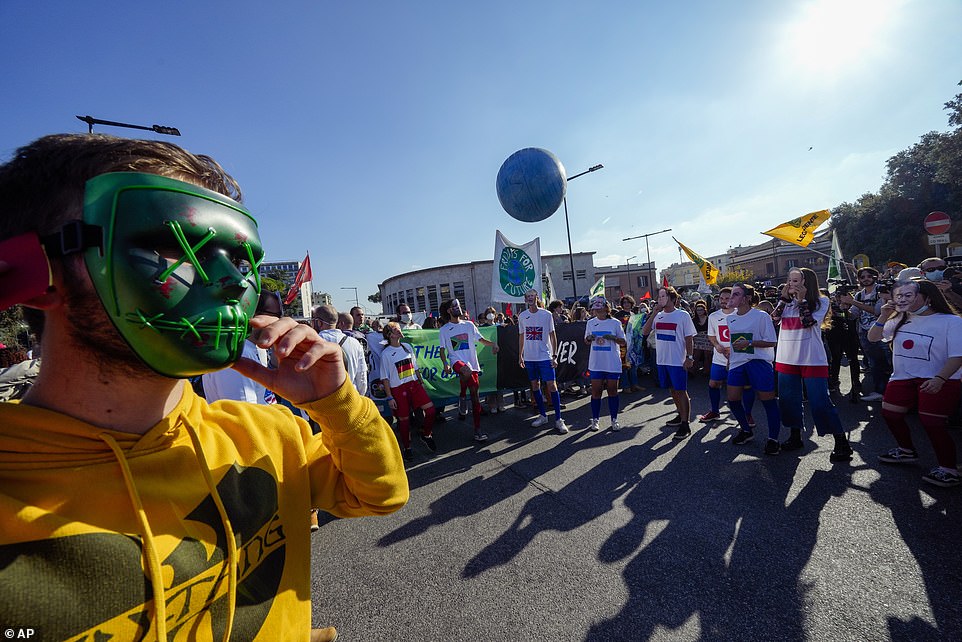 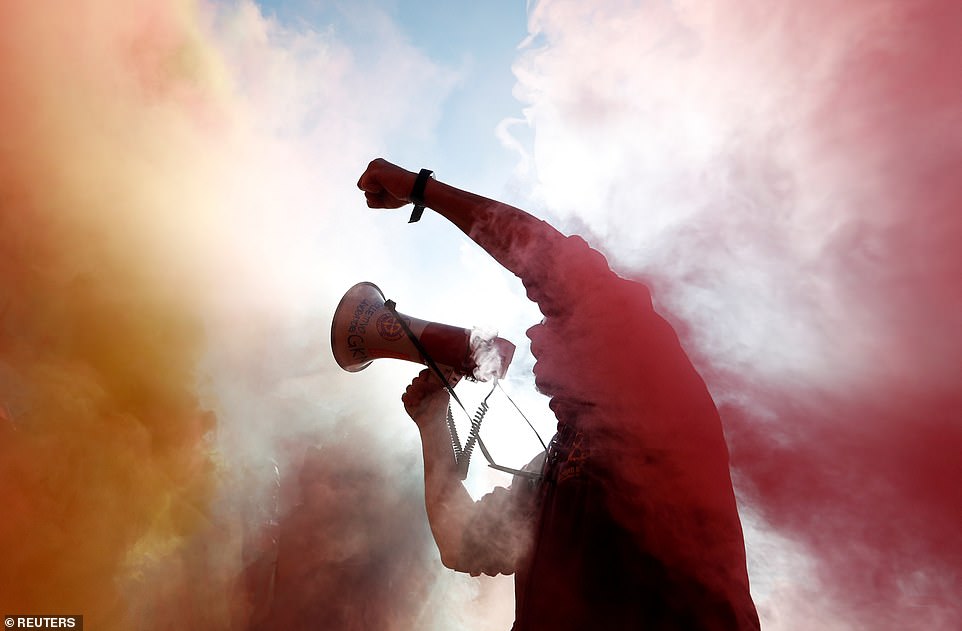 Biden’s administration touted a win on the first day of G20 on Saturday when his fellow world leaders endorsed his plan for a global minimum tax.

The leaders of the world’s top economies backed Biden’s plan during their plenary session, after they took a group photo and before Biden sat down with British Prime Minister Boris Johnson, French President Emmanuel Macron and German Chancellor Angela Merkel to discuss Iran.

‘The leaders all came out in support of a global minimum tax,’ a senior administration official said after the meeting. ‘The president emphasized the importance of this historic deal during his intervention. The president also mentioned that while we don’t see eye to eye on every issue, we can tackle shared interests.’

The new global minimum tax of 15 percent is aimed at reversing the decades-long decline in tax rates on corporations across the world. The administration, led by Treasury Secretary Janet Yellen, pushed for the tax for months. The plan was already endorsed by the finance ministers of each country but was formally endorsed by leaders on Saturday.