Prozac is finding its way into waterways and turning fish into ZOMBIES, study reveals

Prozac that finds its way into waterways could be wiping out fish’s personality, according to a new study out of Australia.

More than 250 million antidepressant prescriptions are filled in the US every year, including 20 million for Prozac, known generically as fluoxetine.

Traces of the drug typically get into the water when people go to the bathroom, since sewage treatment plants typically don’t filter them out.

Guppies exposed to levels of fluoxetine found in waterways near sewage plants exhibited ‘an enormous drop’ in variability, and all displaying similar behavioral traits.

‘For fish populations to thrive in the face of environmental change, members of a group need to behave differently from each other,’ they said.

‘If a fish makes the wrong decision and dies, some others will survive by taking different actions.’

Researchers exposed guppies to levels of fluoxetine, known commercially as Prozac, that are similar to whats found in waterways near sewage plants

Because they’re so ubiquitous, antidepressants are the most-documented drugs contaminating waterways.

Numerous studies have examined the effects of antidepressants, specifically fluoxetine, on all kinds of wildlife, from shrimp to starlings.

But those findings are usually based on averages taken from all the members of a group, which could obscure subtle but important effects on individual animals.

To find out, Giovanni Polverino, a behavioral ecologist at the University of Western Australia in Perth, captured 3,600 guppies. 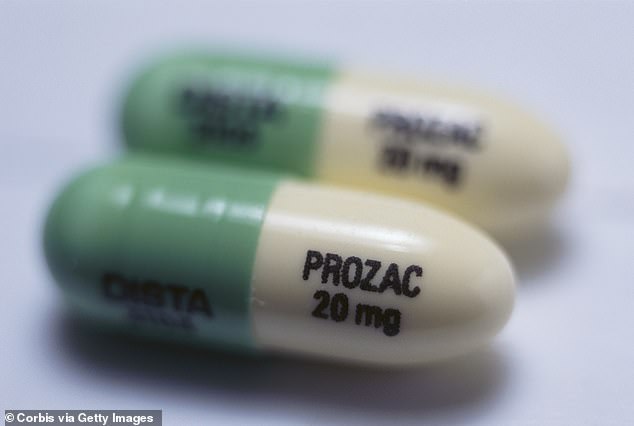 More than 250 million antidepressant prescriptions are filled in the US every year, including 20 million for Prozac, known generically as fluoxetine. Traces of the drug typically get into the water when people go to the bathroom, since sewage treatment plants typically don’t filter them out

Guppies are frequently used in scientific research because they’re small — usually less than two-and-a-half-inches — and they reproduce quickly.

Polverino’s team broke the guppies into three groups: One was left alone, one was exposed to levels of fluoxetine similar to what they’d encounter in the wild, and another given a dose similar to what’s found in waterways near sewage plants.

They then analyzed the fish’s behavior over a two year period.

Normally guppies have complex personalities and show a lot of variation—in aggressiveness, anxiety and even in their levels of bravery and self-control.

According to a 2017 report in the journal Functional Ecology, the fish exhibit a variety of strategies for coping with stressful or unfamiliar situations.

And the control groups did exhibit diverse behaviors, researchers found, with some darting about and others acting more ‘lazy,’ according to Science Magazine.

The fish treated with high levels of fluoxetine, though, had very little differentiation in their behavior.

They acted like zombies that did ‘not have their individuality anymore,’ Polverino told Science.

‘It’s an enormous drop [in variability], something I have never seen before.’

That drone-like behavior could be a killer: Fish, like humans, learn by example—if one makes a wrong move and dies, other fish will try a different tactic and survive.

‘Unfortunately, we found that such behavioral diversity is eroded in fish populations exposed to fluoxetine, and might place large groups of fish at an increased risk of perishing in a changing and increasingly polluted world.’

The uniform behavior maintained throughout numerous generations of guppies, dispelling the idea that behavioral changes caused by fluoxetine could fade as animals get used to it..

‘Most studies often focus on the impact of short-term exposure,’ said co-author Bob Wong, ‘even though many drugs can be highly persistent in the environment and affect animals over long periods of time.’ 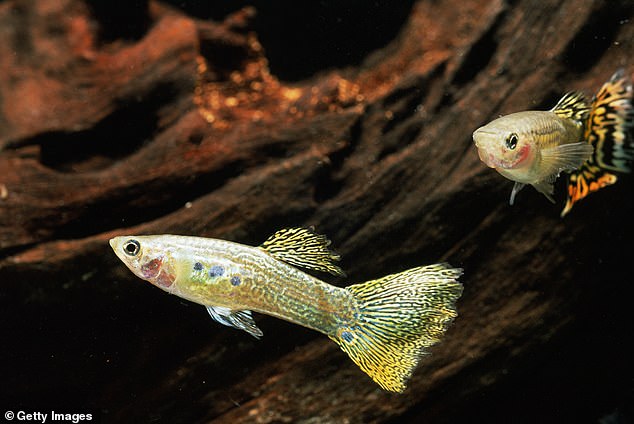 According to behavioral ecologist Giovanni Polverino, the drugged fish did ‘not have their individuality anymore.’ Behavioral diversity is essential for groups of fish to survive predators and other threats he said

The team, who published their findings in Proceeding of the Royal Society B: Biological Sciences, hopes to continue their research and uncover individual variation in other traits, ‘such as metabolism, growth, number of offspring produced and ultimately, survival,’ Polverino said.

Fluoxetine has been associated with a variety of behavioral changes in fish: A 2019 study from Melbourne’s Monash University found high levels of the drug disrupted the foraging habits of female Gambusia holbrooki, a species of freshwater mosquitofish, and made them eat less.

A 2014 study from the University of Wisconsin-Milwaukee found that male fathead minnows administered Prozac became aggressive, anti-social and sometimes even homicidal.

The minnows, which are common to Midwest waterways, were given fluoxetine in the same concentration as found in wastewater.

The technology exists to allow plants to test for pharmaceuticals in their wastewater and waters downstream – but most don’t.

The Environmental Protection Agency considers pharmaceuticals an ’emerging concern,’ and agrees prescription drugs may pose risks to wildlife and humans, but there are no federal regulations in place yet.