Expect fireworks tonight! PSG and Borussia Dortmund have hit an incredible 193 goals between them this season… averaging more than 3 goals-per-game EACH in 2020

It promises to be one of the most entertaining Champions League knockout ties of all-time.

Borussia Dortmund and Paris Saint-Germain are two of Europe’s most attack-minded teams, racking up goals at a ferocious rate with their lethal frontlines.

And it all makes predicting the outcome of this last-16 contest, with the two teams meeting at the Westfalenstadion on Tuesday night and the Parc des Princes on March 11, nigh on impossible. 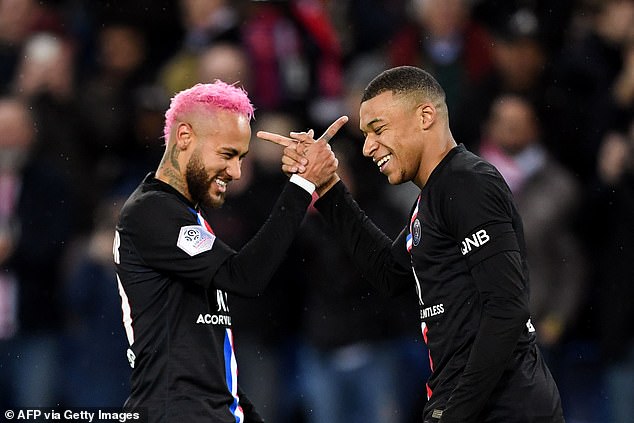 Dortmund have racked up a grand total of 79 goals in their 32 competitive fixtures in the Bundesliga, German Cup, German Super Cup and Champions League so far this season.

But even that impressive total is dwarfed by PSG’s mighty return of 114 in 39 matches in Ligue 1, the French Cup, French League Cup, Champions Trophy and Champions League.

So with Dortmund averaging 2.46 goals per game and PSG 2.92 you’ll get long odds on this one finishing goalless. 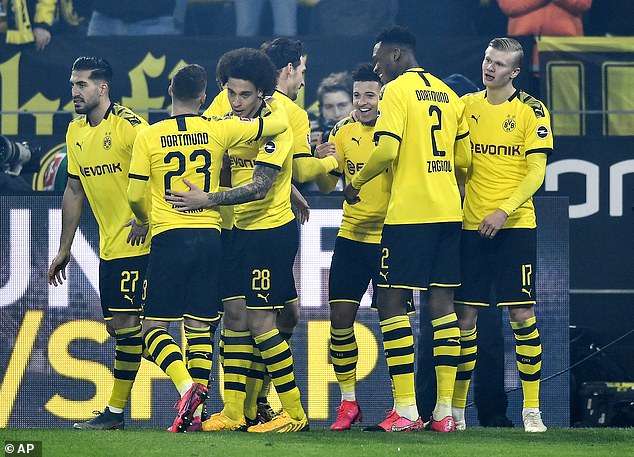 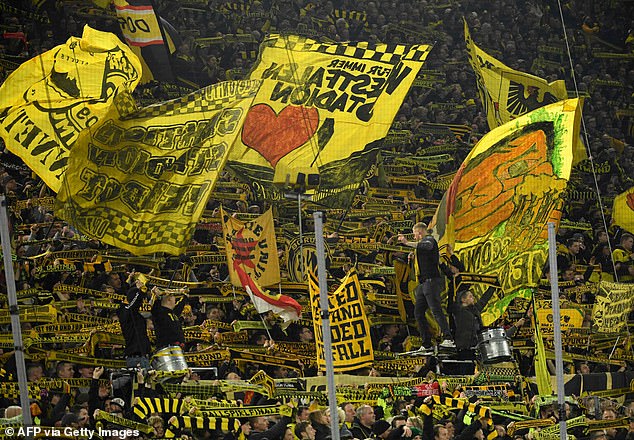 Paco Alcacer was Dortmund’s most prolific goalscorer during the early weeks of the season but suffered injury issues which saw him overtaken by England star Jadon Sancho (16) and Marco Reus (12) in the scoring charts.

But they’re all likely to be overtaken by a certain Erling Braut Haaland, the uber-prolific Norwegian striker who arrived mid-season from Red Bull Salzburg and already has nine in six matches for Dortmund.

Haaland is a large part of the reason why Dortmund have found the net 25 times in just six matches (an average of 4.16 goals per game) since German football returned from its winter break.

Such prolific scoring doesn’t necessarily always translate into automatic victory, however, with Dortmund going down 4-3 to Bayer Leverkusen in the league and 3-2 to Werder Bremen in the cup this month in ding-dong contests.

But more often than not, scoring so many goals does secure victory, with Dortmund hitting five goals on five occasions this season, against Augsburg (twice), Fortuna Dusseldorf, Cologne and Union Berlin. 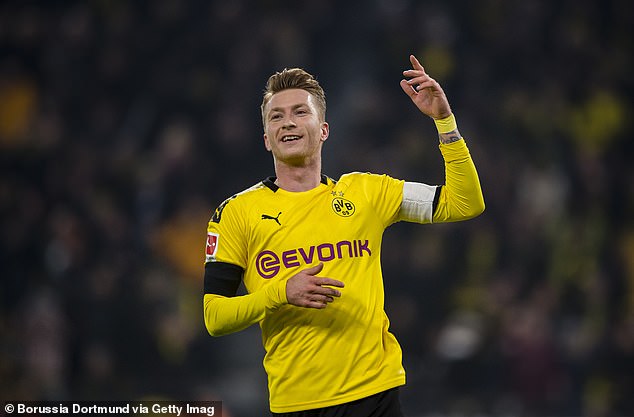 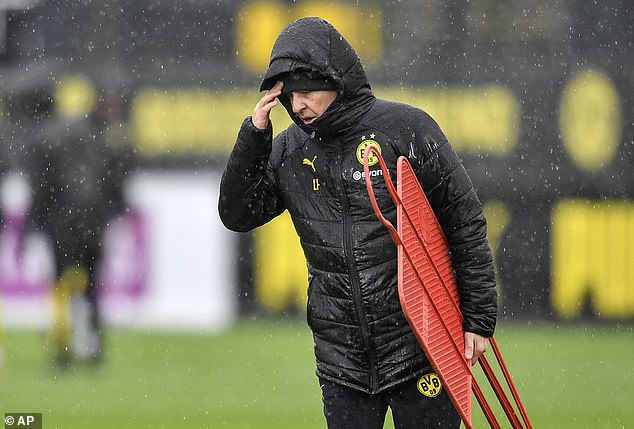 PSG are unlikely to be cowed, however, given they’re in similarly gluttonous mood with 48 goals scored in 13 matches in all competitions since New Year’s Day.

They boast their ‘Fantastic Four’ of Neymar, Kylian Mbappe, Mauro Icardi and Angel Di Maria, who contribute the majority of their goals.

Mbappe leads the way with 24, playing himself into unplayable form ahead of France’s Euro 2020 campaign, while Icardi has 19, Neymar 15 and Di Maria 12. Their Spanish midfield Pablo Sarabia has 12 as well.

They have racked up six goals on three occasions so far this season and five goals three times with plenty of opponents no more than lambs to the slaughter. 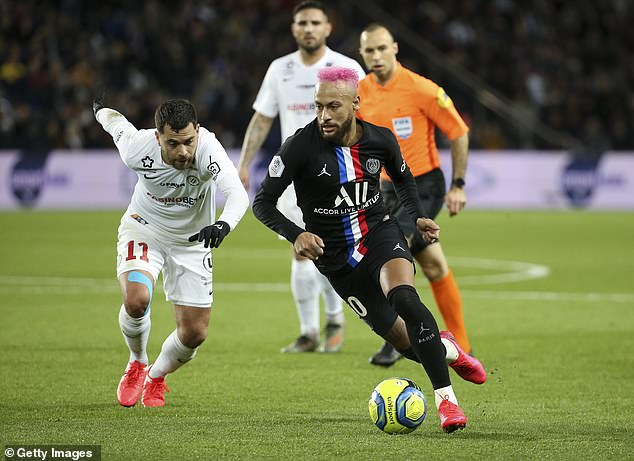 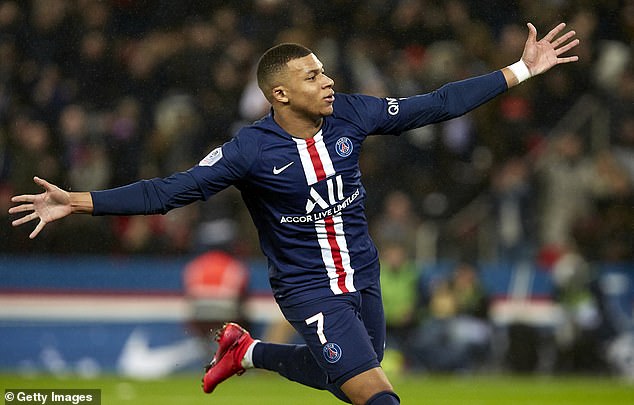 Mbappe is flying this season with 24 goals for PSG, which is good news for France this summer 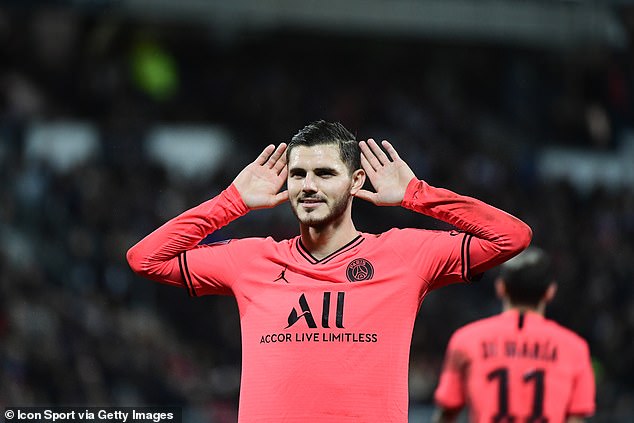 Mauro Icardi, on loan from Inter Milan, has scored 19 goals during an enjoyable season

In other good omens for the neutral, none of PSG’s 26 matches in the Champions League knockout stages have ended goalless.

And Dortmund have never failed to score fewer than two goals in six Champions League home games against French clubs.

So fasten your seatbelts, this could be one hell of a ride.