The average cost of charging an electric car on a public rapid charger has increased by over 20 per cent since September 2021, showing the impact the energy crisis is having on electric vehicle drivers.

This means that the average cost to complete an 80 per cent rapid charge of a typical family-sized electric car with a 64kWh battery has increased by £4, from £18.81 to £22.81.

The costs are not directly comparable, as an average petrol family car on a four-fiths full tank should be able to travel further than most electric cars on 80 per cent of range.

According to the analysis by the RAC’s new Charge Watch initiative, it now costs on average 10p per mile to charge at a rapid charger, up from 8p per mile last September.

This is nearly half the cost per mile compared to filling a petrol-powered family car, which has risen from 15p per mile since the end of last September to a staggering 19p per mile now.

The research, done in partnership with the national FairCharge campaign show, the cost per mile for a similarly sized diesel-powered car is even higher at nearly 21p.

The average price of charging at the ultra-rapid chargers – which can deliver a charge to a compatible vehicle in as little as 20 minutes – has increased by a greater margin of 16.76p per kWh, from 34.21p per kWh in September to 50.97p in May.

This means the cost to charge a vehicle to 80 per cent on a pay-as-you go, non-subscription basis through a rapid on-road charger has risen from £17.51 to £26.10.

Fortunately for EV drivers, this is still £48 cheaper than filling a petrol-powered car to 80 per cent, although electric cars don’t get as many miles from an 80 per cent charge as petrol cars do from an equivalent fill-up of a tank.

The price increases facing EV drivers using public chargers is in tandem with the rising wholesale cost of electricity, which itself is driven by hikes in the cost of gas, showing that petrol drivers aren’t the only ones affected by rising fuel costs.

Ofgem figures show that the wholesale cost of gas doubled between the end of September 2021 and the end of March this year, with wholesale electricity prices rising by around 65 per cent over the same period.

While the cost of charging a zero-emission electric car remains good value compared to topping up a petrol or diesel car, a majority EV drivers could still be impacted by rising fuel costs.

As things stand, drivers who can’t charge up at home – which could be as many as one-in-three – are penalised by having to pay a higher rate of VAT on electricity.

RAC’s electric vehicle spokesperson Simon Williams said, ‘Just as the price that drivers of petrol and diesel cars pay to fill up at the pumps is driven by fluctuations in the world oil price, those in electric cars are affected by gas and electricity prices.

‘But while electric car drivers may not be immune from the rocketing price of wholesale energy there’s no doubting that charging an EV still represents excellent value for money compared to filling up a petrol or diesel car. 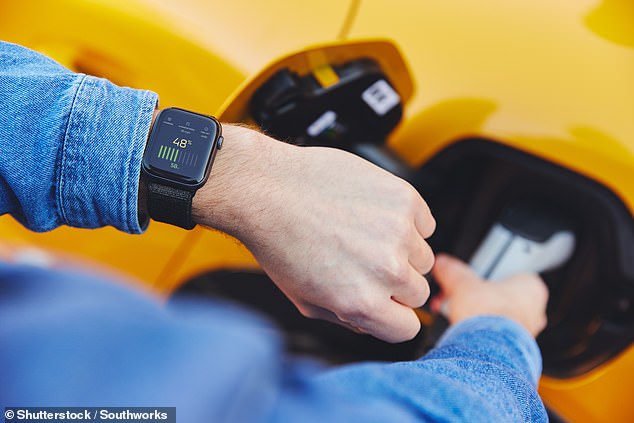 According to the RAC’s, it now costs on average 10p per mile to charge at a rapid charger, up from 8p per mile last September, more than any other form of electric car charging

‘Unsurprisingly, our analysis shows that the quickest places to charge are also the most expensive with ultra-rapid chargers costing on average 14% more to use than rapid chargers.

‘For drivers in a hurry though, or travelling a long distance, paying this premium might well be worth it with the very fastest chargers capable of almost completely replenishing an electric car’s battery in a matter of minutes.’

And with previous research by data analytics firm Outra, shows that around half of all homes are not suitable for at-home electric car charging, potentially leaving millions more paying higher prices to charge the same vehicles.

The AA is also warning that the Department for Transports’ target of 120,000 on-street chargers by 2030 could be missed if more isn’t done to help promote on-street charging.

Figures from the DfT show 2,641 on-street charge points have been funded by the governments grant scheme, but a further 8,415 have yet to be installed.

The AA is warning that the Department for Transports’ target of 120,000 on-street chargers by 2030 could be missed if more isn’t done to help promote on-street charging.

This risks putting off a huge number of drivers from switching to electric next time they change their vehicles. 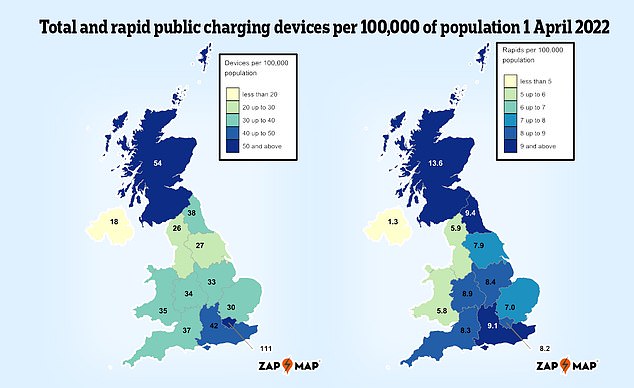 The AA has said that the government needs to install more than 1,000 public charge points each month in order to meet their 100,000 target by 2030

Jack Cousens, head of roads policy for the AA, said: ‘With around 10,000 on-street charge points currently planned, the installation rate needs to increase to more than 1,000 charge points each month just to meet the government’s target.

‘Sadly just 87 councils out of almost 400 across the United Kingdom have applied for the on-street residential charge point grant since 2017. This needs to dramatically improve so that EV drivers across the country have access to local charge points.

‘Every additional charge point installed helps reduce the over-exaggerated worries of range anxiety and legitimate concerns drivers won’t find a working charger when they need one.

‘These concerns are always in the top three barriers to EV ownership, so increasing the number and type of chargers, as well as making them more reliable, would help tackle these fears.’

The AA also called to make charging points more cost friendly, to help further incentivise drivers to make the switch to all-electric when they come to renew.

The FairCharge campaign is also calling for the 20 per cent VAT rate on electricity at public chargers to be cut to match the 5 per cent levied on domestic electricity, making it easier for those who cannot charge at home to switch to an electric car.

Doing so would see the cost of charging up at a rapid charger cut by 5.57p per kWh, and at an ultra-rapid charger by 6.37p.

This would reduce the cost of an 80 per cent charge by £2.85 and £3.26 on average at rapid and ultra-rapid chargers, respectively.

Simon Williams said: ‘Right now, VAT on electricity from a public charger is levied at a rate four-times that which applies to domestic electricity which makes it far more expensive to charge on-the-go than it should be.

‘We are right behind the FairCharge campaign in thinking this is totally unfair and flies in the face of the Government’s ambition for many more drivers to opt for an electric vehicle.

‘Given the cost-of-living crisis, it’s surely only fair that everyone pays the same level of VAT no matter where they buy their electricity from.’

Meanwhile, Quentin Willson, founder of the FairCharge campaign, said we need to keep monitoring the change in prices to ensure prices remain fair and stable.

‘Keeping a watch on charging prices is essential to make sure the electricity for charging up EVs never gets close to the cost of filling up with diesel.

‘EV drivers need free to access data on charging prices across the country. And charging operators need to know that everybody is watching.’