Publishers are moving away from ‘macho’ heroes in non-fiction books for boys and moving towards an ‘alternative type of hero’ who  to those who ‘checks their privilege’.

It comes following impressive sales of books that empower young women, such as Good Night Stories for Rebel Girls which has sold more than a million copies worldwide.

The publishers aim to move away from the ‘stereotypical idea of masculinity’ and action-men style heroes such as Prince Charming and will instead focus on stories of real-life heroes such as  Usain Bolt and James Harrison, a blood donor whose rare plasma has saved millions of lives over 50 years.

The first book is called ‘Stories for Boys Who Dare to Be Different’ by Ben Brooks, and will feature stories from 100 men such as Bill Gates, Salvador Dali, Benjamin Zephaniah and Stormzy.

It will be followed up in September by The Good Guys: 50 stories of men ‘who have showed that changing the world doesn’t require a sword or a corporate jet’.

All of the focus has been on girls, which is great, and necessary,’ Quercus Books nonfiction publisher Katy Follain, who published Stories for Boys Who Dare to Be Different this month told the Guardian.

‘But statistics show that male suicide is on the rise, and the more I looked into it, the more I thought there was something there for boys.’

She added: ‘Being male doesn’t have to involve being a petulant man-baby or a sword-wielding superhero,’ 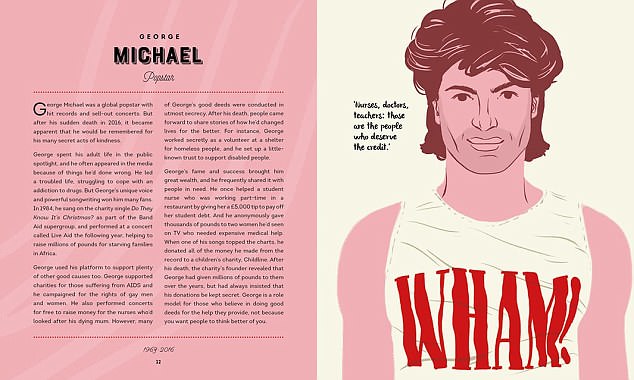 ‘The alternative type of hero is a man who checks his privilege and who is kind, selfless, courageous and not afraid to stand up for what’s right.

She also said the ‘rise of the #MeToo and #TimesUp movements’  brought the behaviour of powerful men such as Trump and Weinstein to the fore and it was important to shine the light on positive men.

Rob Kemp, who wrote The Good Guys said:  ‘The #MeToo and #TimesUp movements have not only highlighted the poor behaviour of men – and demand they’re rightly made culpable for it – but also shown us how the vast majority of people want to look to positive role models and be inspired by those who don’t mean to harm others, but help them instead. I hope these kinds of books reflect this and inspire young minds to follow a more positive path.’

More than 100,000 copies of the books around the world have already been pre-ordered.