England’s deputy chief medical officer has called for the nation’s 10pm pub curfew to be brought forward to 6pm in an effort to reduce the increasing rates of transmission, according to reports.

Professor Jonathan Van-Tam admitted there was little evidence supporting the benefits of a 10pm curfew and said he would prefer a closing time of 6pm instead as he spoke to Greater Manchester MPs during a virtual meeting regarding the city’s refusal to enter Tier 3 restrictions.

When asked if the 10pm curfew reduced the rates of coronavirus transmission, the professor said: ‘Not really. I’d prefer 6pm, or even earlier.’

However the Government advisor also admitted there was no evidence that shutting pubs down completely under a Tier 3 lockdown would control the virus, according to The Daily Telegraph.

His comments come as scores of revellers today braved the winter chill as they enjoyed a night out in the capital’s expanded beer gardens- just a day after London entered Tier Two lockdown.

Pub-goers swapped a night in at home to sit outside the numerous bars in central London’s Soho and get round curbs putting a stop to multiple households sitting inside pubs and restaurants.

Undeterred by the recent lockdown restrictions, crowds of revellers appeared in high spirits as they sat outside in large groups without face masks and dined al fresco.

Revellers sat outside bars and restaurants in Soho, central London, as the capital entered day two of the new Tier Two lockdown 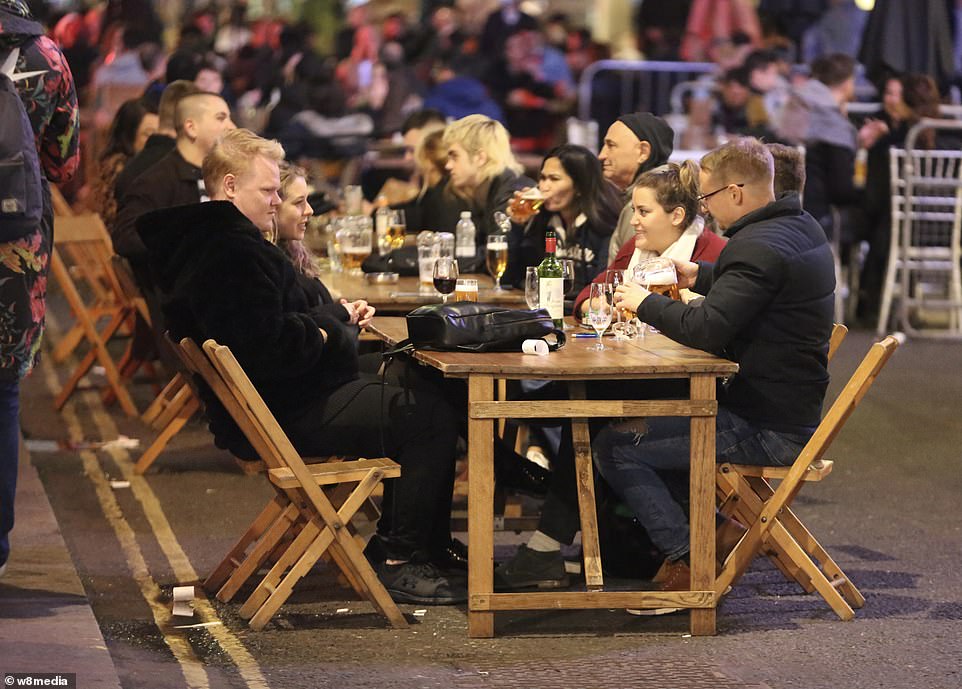 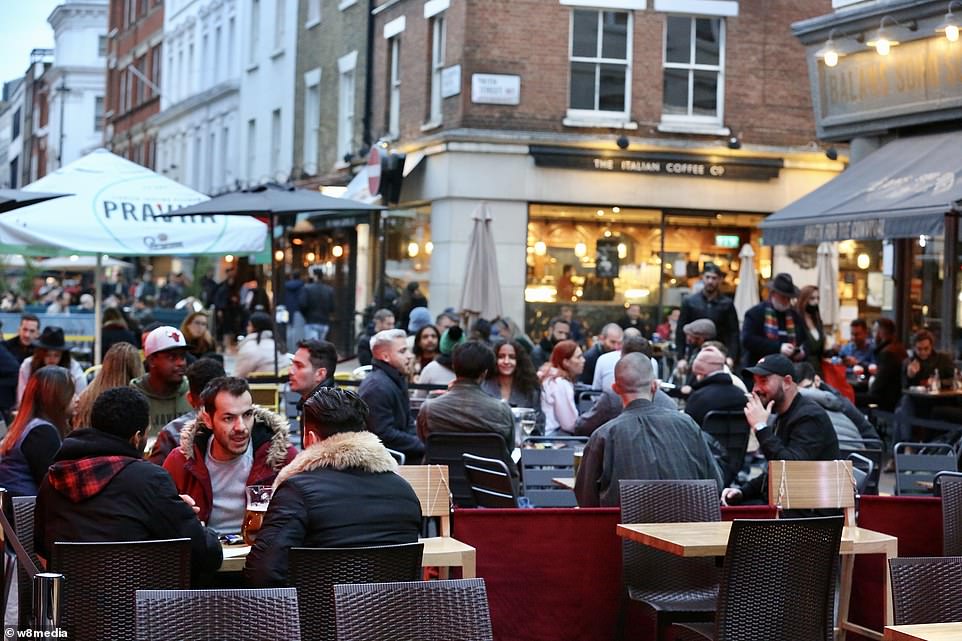 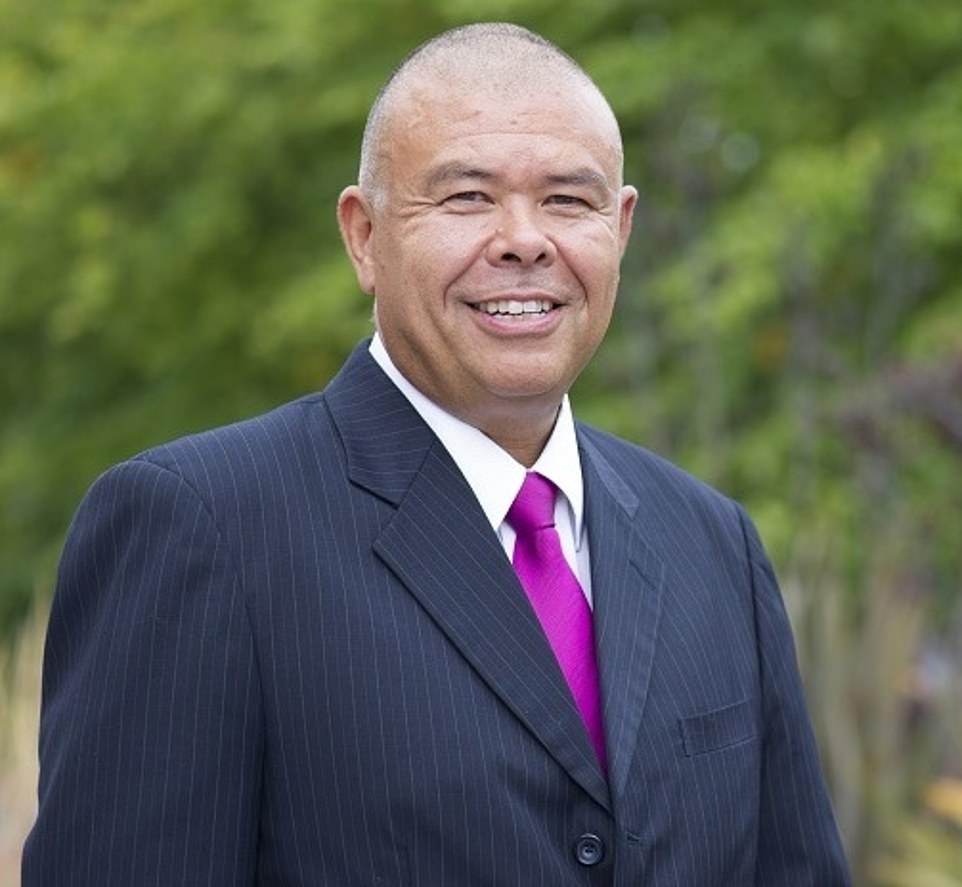 The scenes come just a day after multiple households were banned from meeting inside pubs and restaurants under the new Tier Two restrictions.

Despite the evening scenes, hospitality bosses warned yesterday that central London revenues had fallen 85 per cent during the first day of new restrictions, while bosses warned that 200,000 jobs could be lost this weekend alone.

Soho, famous for its thriving nightlife, was pedestrianised when the national lockdown started to lift at the start of summer so its eateries and bars could set tables up in the street.

However, Kate Nicholls, Chief Executive of UKHospitality, said that revenue across bars and restaurants in central London had still plunged by 85 per cent as less people took to venues under new restrictions.

She said: ‘The first day of Tier 2 restrictions saw the hospitality sector’s worst fears confirmed with a 50 per cent increase in cancellations and a fall in forward bookings.

Ms Nicholls continued: ‘That is clearly unsustainable and businesses in London are now planning to close their doors and shutter their sites, with forecasts of up to 200,000 job losses unless enhanced JSS is extended.’

She added: ‘Being moved into tier 2 is a curse for businesses. They will be trapped in a no man’s land of being open, but with severe restrictions that will significantly hit custom, all while unable to access the job support available in tier 3. It is the worst of both worlds for businesses.

‘Venues in London have already taken a hit due to the dip in inbound tourism and with people increasingly working from home.

‘A move into tier 2 will now be catastrophic for some of them and it is only going to be made worse by the end of the furlough scheme in under two weeks.’

This week the Prime Minister divided the country into ‘medium’, ‘high’ or ‘very high’ alert sectors after after a 9.3 per cent increase in cases on the previous week.

Liverpool was the only area to be immediately put into Tier 3, the highest level, on Monday with Manchester, Newcastle and Birmingham among cities being ranked as Tier 2, or ‘high’ risk.

But the Government also reached an agreement with Lancashire, which has now joined Liverpool in the top bracket. 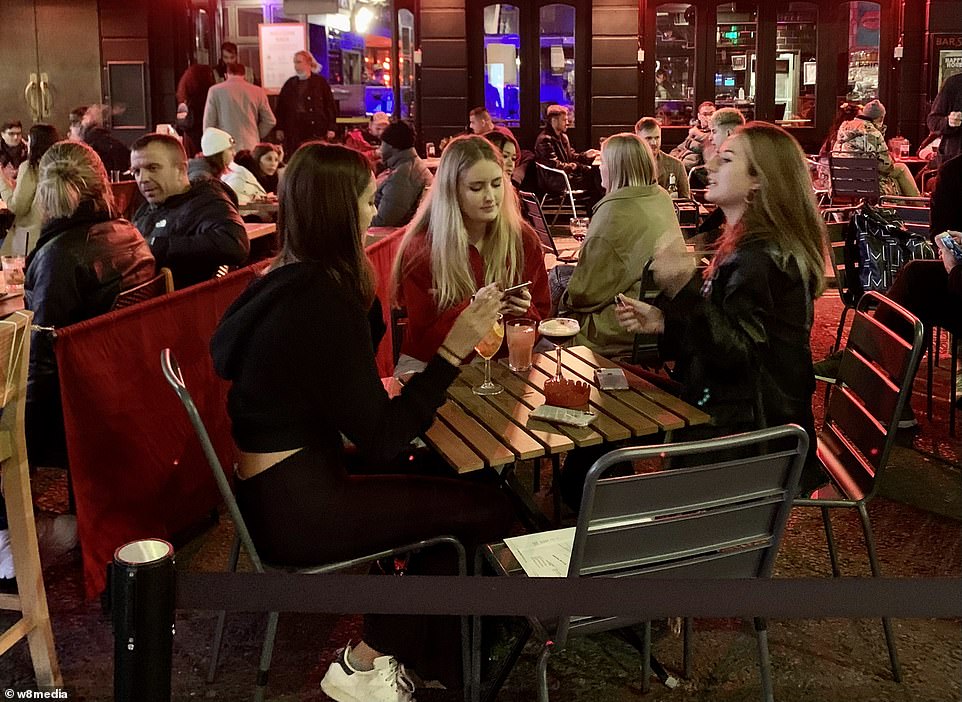 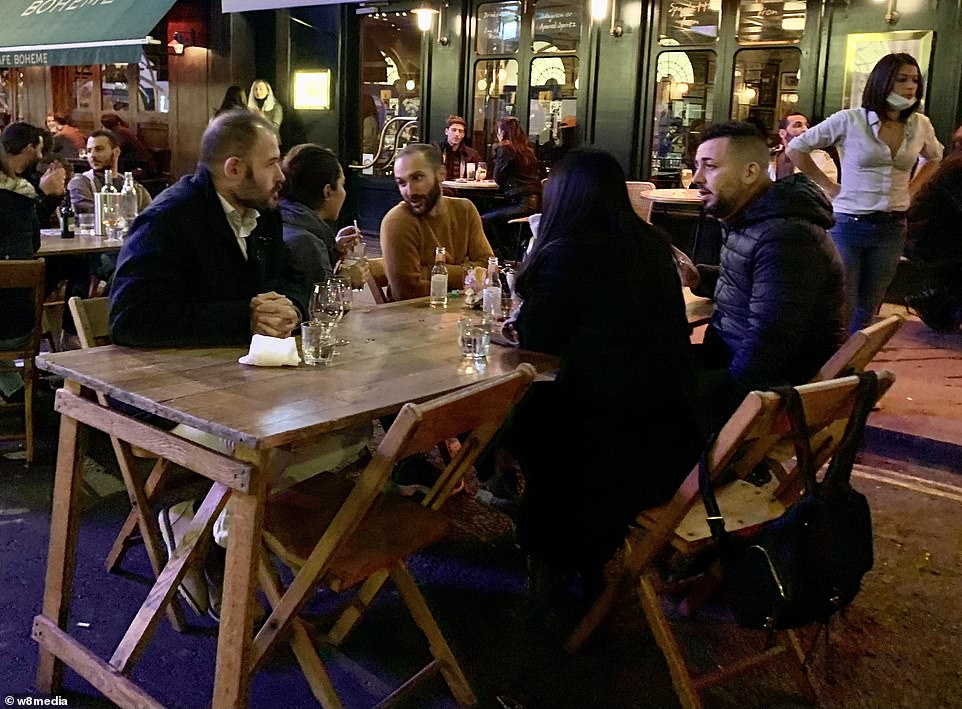 Crowds of people site outside as London moves into Tier 2 and sees a ban on multiple households meeting inside bars, pubs and restaurants 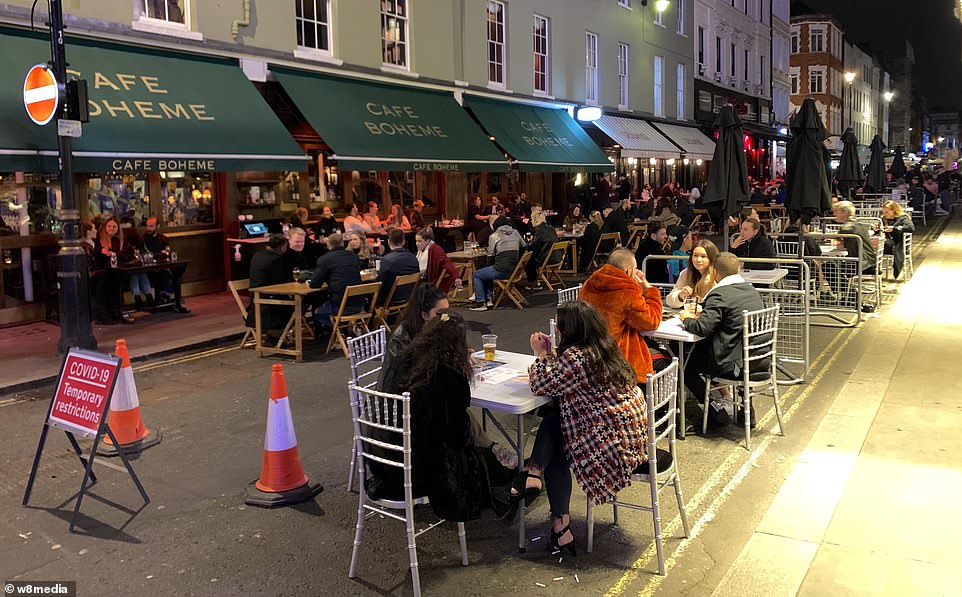 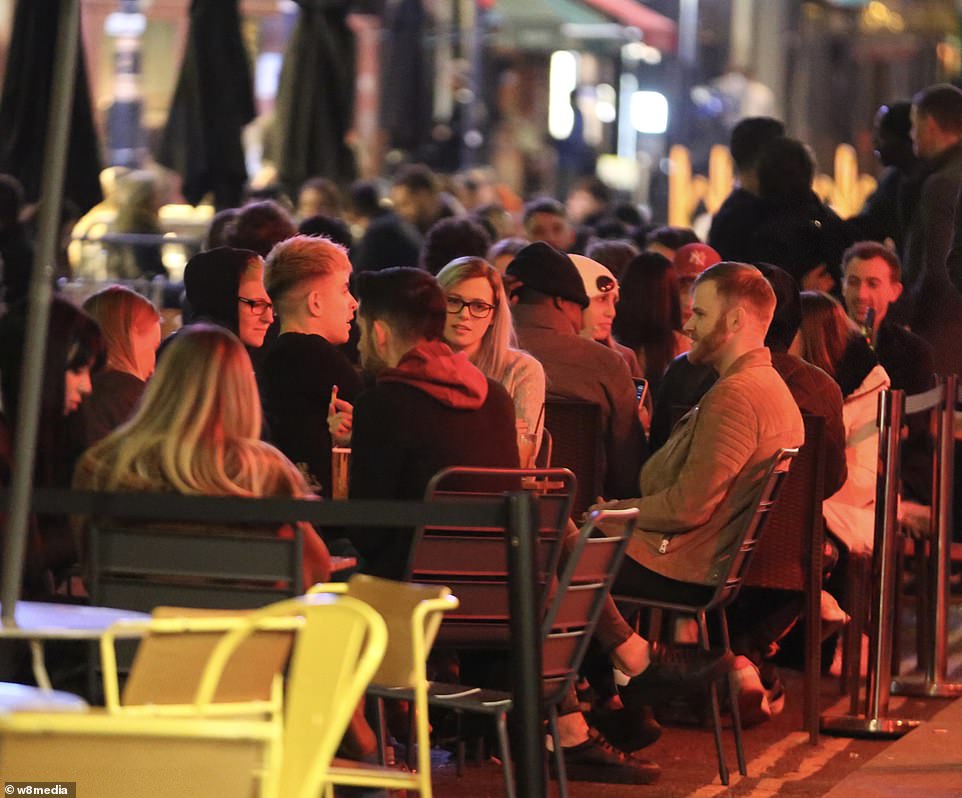 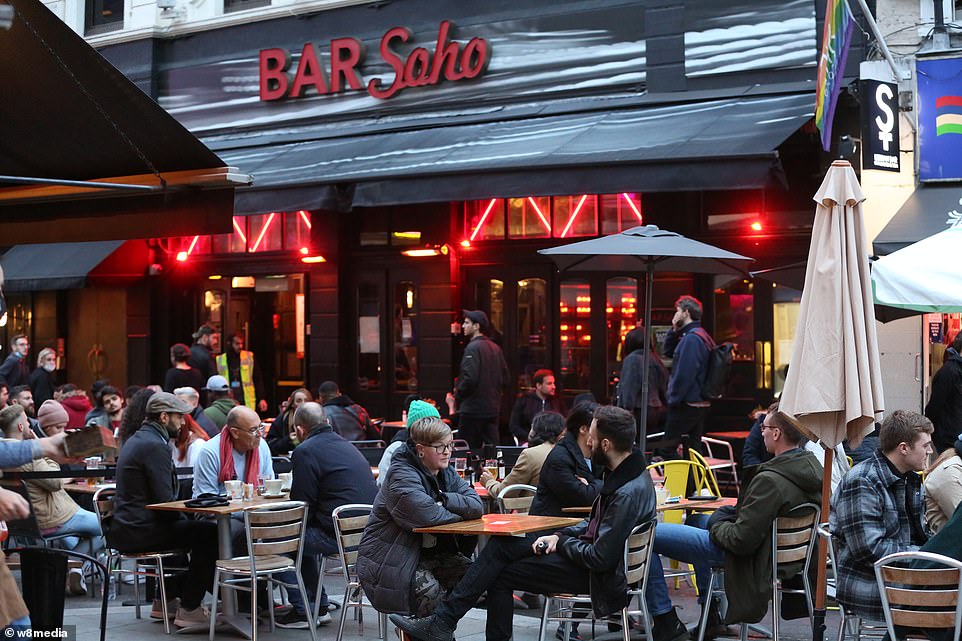 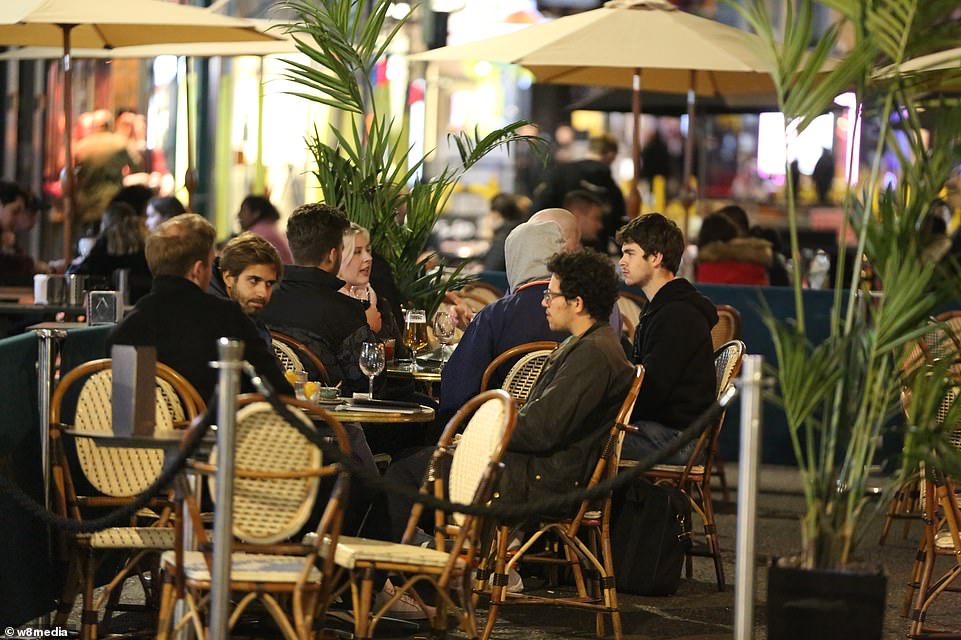 Despite new guidelines banning individuals from different households in London from mixing indoors, drinkers found a way round the rules 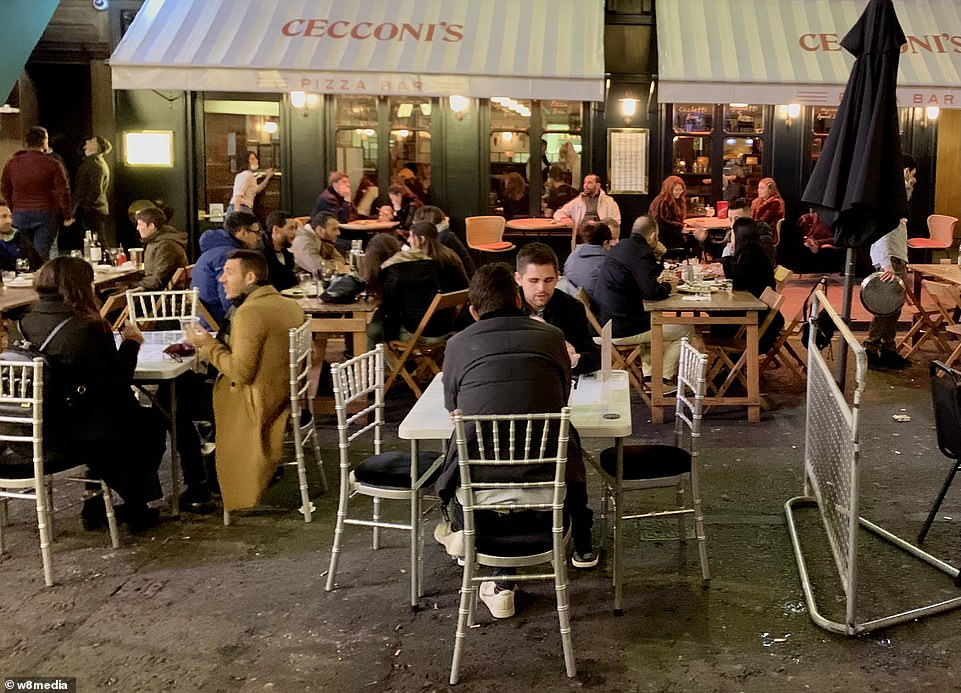 This week the Prime Minister divided the country into ‘medium’, ‘high’ or ‘very high’ alert sectors after after a 9.3 per cent increase in cases on the previous week.

The Department of Health said there would be a £12million support package in Lancashire as well as more money for an economic recovery ‘task force’ over the next six months. Local sources claimed in total it could be worth £30million.

What the three tiers mean for pubs?

Curfew of 10pm for all drinking establishments

Pubs and bars are required to close, with furlough-style compensation for businesses

Justifying the move in Lancashire, Health Secretary Matt Hancock pointed to an ‘unrelenting rise’ in cases.

Among the most vulnerable over-60 age group the rate stands at 214.

Thousands of venues closed from midnight on Friday, with casinos, betting shops and car boot sales given another 48 hours’ grace.

Tier 1 restrictions, which the majority of England have been placed under, are believed to mirror the rules currently in place across the country.

It includes the rule of six, a 10pm curfew, group sport to be played outdoors only and a maximum of 15 guests at wedding ceremonies.

Under Tier Two restrictions, households are also banned from meeting indoors, even in hospitality venues.

Two households are allowed to socialise outdoors but must stay within the six-person limit and adhere to social distancing.

There is an ongoing conflict about whether Manchester will become a Tier Three lockdown area, with Greater Manchester mayor Andy Burnham arguing that the North was being treated like a ‘canary in the coalmine’ with experimental restrictions.

Today a further 16,982 people tested positive for coronavirus in the UK – a leap of almost a third compared to last week.

Today’s number of positive cases is up 32 per cent on last Sunday’s total of 12,872 and is 811 more cases than yesterday.

Adding to concern is Scotland’s 316 cases – which were released after a ‘short delay’ this afternoon.

Officials warned the number reflects a ‘capacity issue’ which caused processing delays so the actual number of cases north of the border is likely higher.

However, testing capacity is almost 15 times larger than this time in April – with 304,315 tests processed today alone. 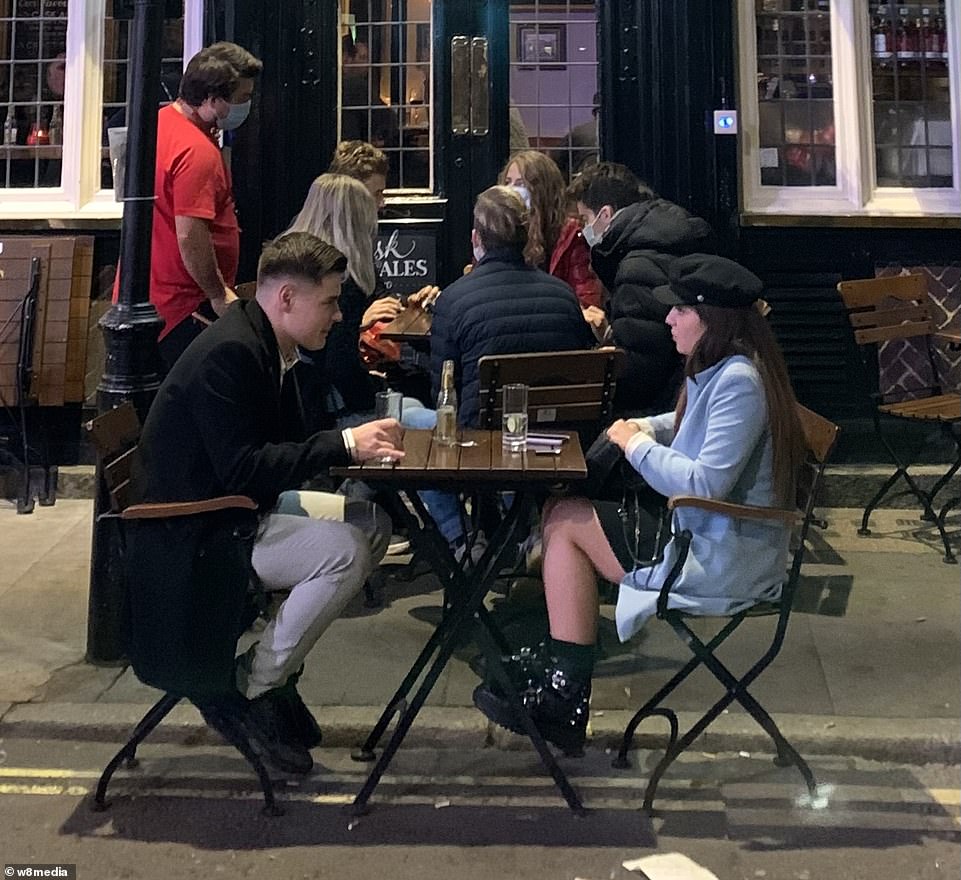 A group of people sit outside as London heads into day two of the Tier Two lockdown. Under Tier Two restrictions, households are banned from meeting indoors, even in hospitality venues 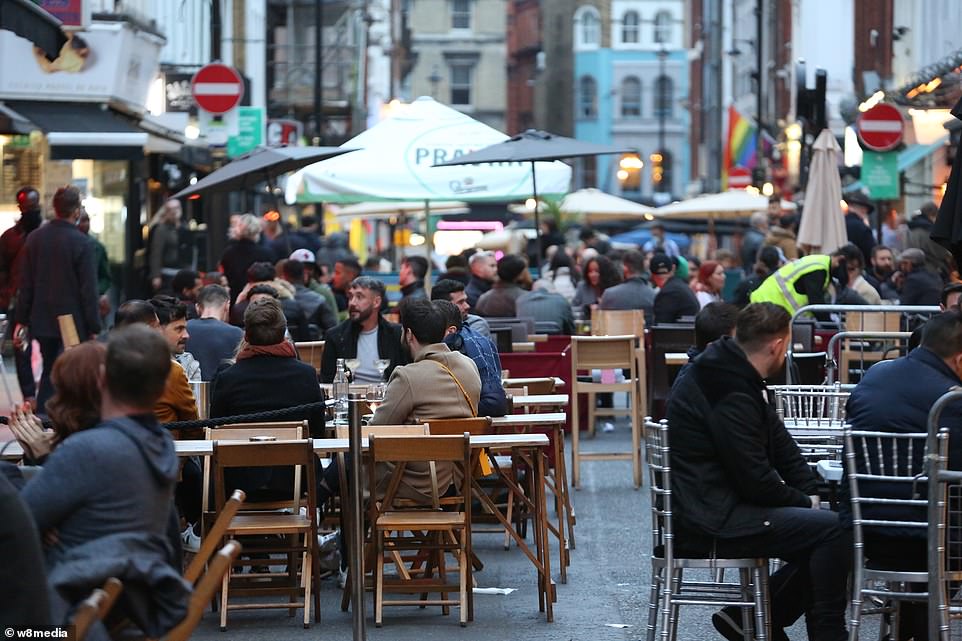