But customers were left with a sour taste in their mouths after waiting hours for rides and paying over the odds for drinks. 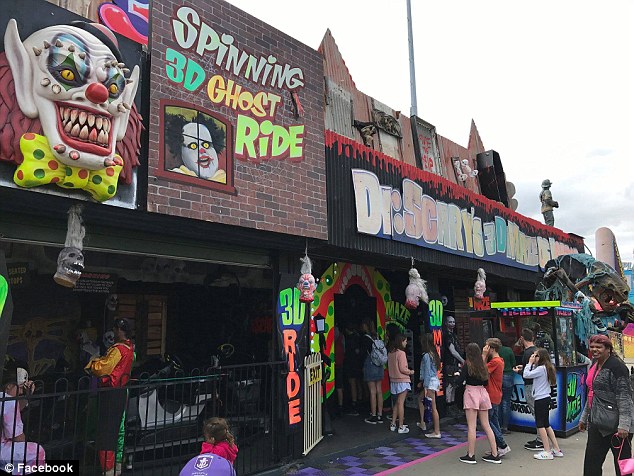 Partygoers also complained that there was no option to pay cash and were slapped with a 1.2 per cent surcharge whenever they used their card.

The Facebook page has been flooded with angry comments for the ‘absolute waste of money’ which left people demanding for their money back.

‘This was the worst event ever! What a f*cking waste of money,’ one wrote.

‘Whoever organized this event needs a kick in the a**!! the idiots who did the clown purge on the streets last year where more entertaining than last night,’ said another disappointed punter.

‘This was the worst event ever! What a f**king waste of money,’ one wrote 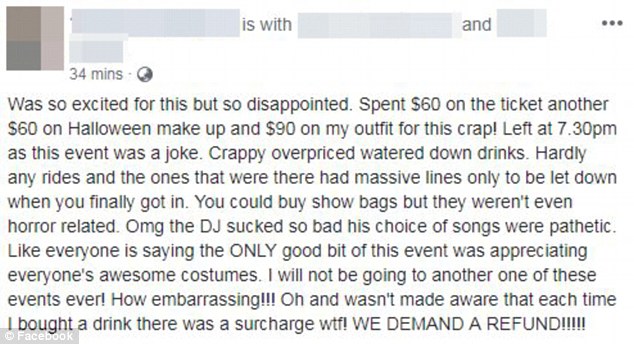 Some punters also claimed that staff abused them when they asked why rides were closing an hour earlier than advertised.

‘Heard the staff mocking and abusing patrons for asking about the rides shutting off early…no warnings…the “manager” told them to get over it as they’re ”adults”…adults that paid $60+ a ticket for A ”Halloween” event that had nothing…waste of a night..,’ one commented.

‘An hour and a half wait in a line to get on rides that then closed at 10pm. And then be abused by the staff at the rides. Security staff were all argumentative and refused to give their ID number, a legal requirement. No one was able to give a solid answer and there was a stream of people all being kicked out at 10pm. Ridiculous,’ another commented.

A ‘Perth Happy Halloween we want a refund!’ has also launched with revellers wanting a refund.

Others are considering involving the Australian Competition and Consumer Commission (ACCC) over the various credit card surcharges over the night.