Putin ‘has the right to launch nukes if he is provoked by NATO’, Russian ambassador says

Vladimir Putin has the right to launch nukes if he is provoked by NATO over the Kremlin’s invasion of Ukraine, a Russian ambassador to the UN has claimed.

Just hours after another Kremlin spokesman warned of possible atomic war, Dmitry Polyanskiy sparked further fears by hinting there would be a seismic response a to any direct involvement in the conflict from the West.

‘If Russia is provoked by NATO, if Russia is attacked by NATO… we are a nuclear power, why not?’ he told Sky News at the UN in New York.

‘I don’t think it’s the right thing to be saying. But it’s not the right thing to threaten Russia, and to try to interfere. So when you’re dealing with a nuclear power, of course, you have to calculate all the possible outcomes of your behaviour.’

The top diplomat also continued to dismiss claims that Kremlin forces have carried out war crimes, and suggested evidence of Ukrainian cities being destroyed by Russian missiles was ‘fake news’.

‘We said from the very beginning, that our military is not a threat for the civilian population Ukraine,’ he added.

As concerns continue to grow, France has raised its alert level, and has taken the unprecedented step of deploying three nuclear submarines at sea, according to FranceInter.

As the only European superpower other than the UK, Paris believes it has the means to issue a devastating counter-attack if necessary, ‘coming from anywhere’, as the subs are able to blend into the ocean floor for months.

It comes after Putin’s spokesman Dmitry Peskov yesterday also refused to rule out using nuclear weapons, claiming Russian doctrine allows the President to use such force to see off ‘existential threat’.

Vladimir Putin has the right to launch nukes if he is provoked by NATO over the Kremlin’s invasion of Ukraine, a Russian ambassador to the UN has claimed (pictured, a Russian missile test in February) 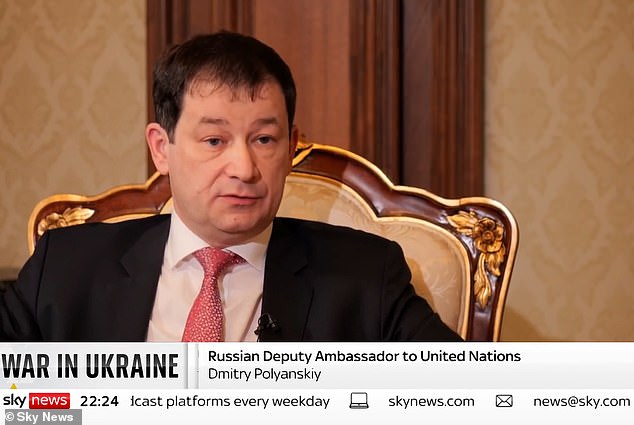 Just hours after another Kremlin spokesman warned of possible atomic war, Dmitry Polyanskiy sparked further fears by hinting there would be a seismic response a to any direct involvement in the conflict from the West 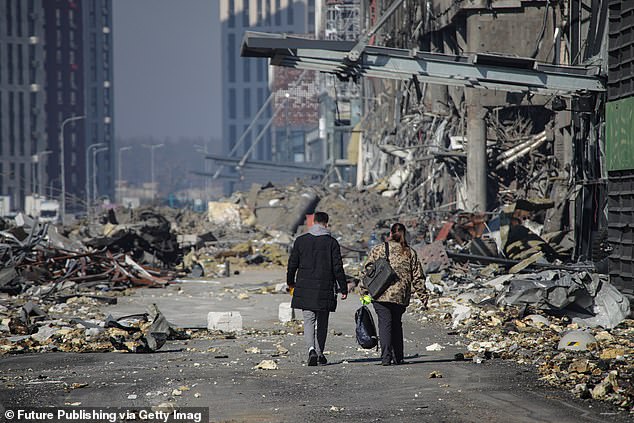 Peskov was asked three times on CNN whether he could definitively rule out the possibility of the Russian leader pushing the button – and three times refused to give a straight answer.

John Kirby, the Pentagon spokesman, slammed Peskov’s rhetoric as ‘dangerous’ saying it is ‘not the way a responsible nuclear power should act’.

Kirby added that the US is keeping Russia’s nuclear arsenal – believed to be the world’s largest at 6,500 warheads – under constant surveillance and has not yet seen any indication that it is preparing to use the weapons.

But that will do little to reassure jittery world leaders, particularly in the West, after Putin used a fire-and-brimstone speech as he declared war on Ukraine to make a thinly-veiled nuclear threat.

Ordering the start of his ‘special military operation’ on February 24, Putin issued a warning to anyone ‘who might be tempted to meddle in the ongoing events: whoever tries to stand in our way or create threats for our country.’

He said: ‘People should know Russia’s response will be immediate and lead you to consequences you have never encountered in your history.’

Just three days later, on February 27, Putin then ordered his nuclear forces to be put on a ‘special alert’ in what he said was a response to ‘aggressive statements’ made by the NATO alliance – specifically threatening the West.

America later said that it had not observed any significant changes in Russian nuclear posturing in response to the order, but still cancelled a test-launch of one of its own weapons the following week as a precaution.

There are also fears that Russia could be considering using a low-yield ‘tactical’ nuclear weapon against Ukraine itself in order to turn the tide of the war, which has so-far gone against Moscow’s troops.

Leon Panetta, former US defence secretary, said Peskov’s remarks show Russia is ‘looking for a possible excuse for the use of low-yield nuclear weapons.’

President Putin has raised the threat of using nuclear weapons – and his spokesperson Dmitry Peskov refused to rule out their use, in an interview with me tonight. pic.twitter.com/uxQqncLGYN 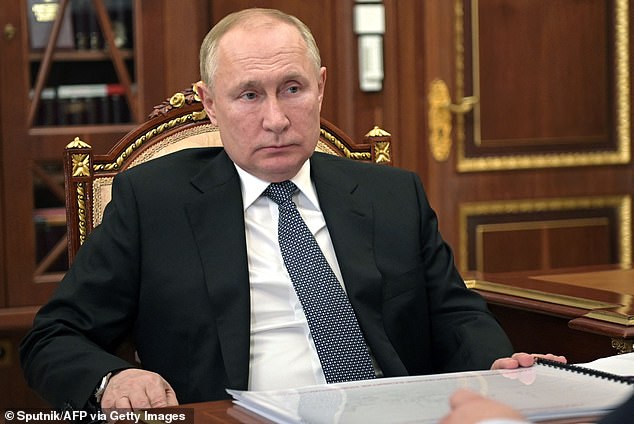 Putin made a thinly-veiled nuclear threat to ‘whoever tries to stand in our way’ as he declared war in Ukraine, warning of ‘consequences you have never encountered in your history’ 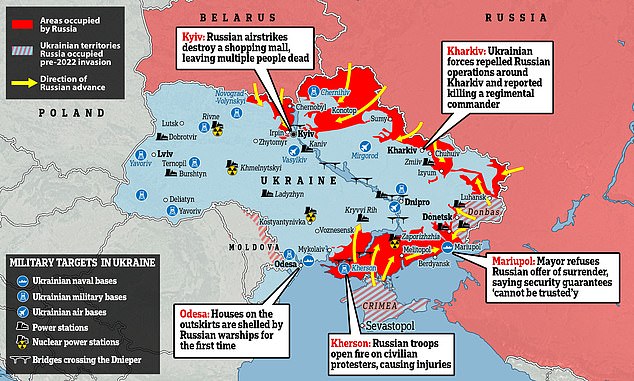 I think that presents a real concern that Russia at least is considering that possibility,’ he added. ‘I don’t see how you can see it any other way but as dangerous.’

Using the weapons would be based on ‘a very false premise that somehow Russia is being threatened,’ he said.

Western leaders and intelligence agencies have been warning for days that Putin may resort to desperate measures as the war in Ukraine goes against him.

On Sunday, Joe Biden repeated warnings that the Kremlin looks to be developing a pre-text to use biological or chemical weapons by falsely accusing Ukraine of possessing them – saying Putin’s ‘back is against the wall’.

It also comes after Ukraine warned that Russia appears to be manufacturing man-made catastrophes at either Chernobyl or Zaporizhzhia nuclear power plants – both of which are in the hands of the Kremlin’s men.

That means water pumps at Chernobyl which keep spent nuclear fuel submerged in water to cool them will not automatically run, meaning the water will eventually evaporate if not topped up manually.

Should that happen the fuel could catch on fire – pumping a cloud of radioactive ash into the air which would cause fallout over wide areas of Europe.

Russian forces have been fought to a standstill across Ukraine as the initial phase of Putin’s invasion spectacularly failed.

Ukrainian forces remain in control of all major cities across the country except for the regional capital of Kherson, where counter-attacks are now underway in an effort to recapture it.

Counter-attacks are also underway to the west of the capital Kyiv, in Voznesensk in the south, and around Izyum in the north-east.

Ukraine’s generals believe Russian forces only have enough supplies to last three more days in the field, while Western experts have said Putin’s men will soon need to switch on to the defensive as their stockpiles run low.

It means Putin’s troops will be vulnerable to counter-attacks, pushing up Russia’s already-high casualty toll even further.

Reliable casualty figures for either side are hard to come by, but it is thought Russia has seen around 10,000 troops killed after a typically pro-Kremlin tabloid published the figure on Monday night and credited it to the Defence Ministry.

The same article said another 16,000 men had been wounded, accounting for around a fifth of the total force Putin arrayed before the start of the war.

The figure was quickly deleted and blamed on a hack, but is compelling because it sits between low-ball US estimates of Russian deaths – around 7,000 – and optimistic Ukrainian tolls – around 15,000.

Ukraine’s death-toll is even more opaque. Preisdent Zelensky has said around 1,300 troops have died in fighting, but that is viewed as an under-estimate and has not been regularly updated.

Kyiv’s forces are thought to have suffered their heaviest losses fighting in the south and east, where Russian offensives have managed to push the furthest and threaten to surround soldiers dug in along the old frontline with pro-Moscow rebels.

Few expected Ukraine’s defences to hold for more than a few weeks in the face of attack by what was supposed to be the world’s ‘second military’ after the US, but the war is now entering its second month with no sign of a break-through for Russia.

Observers will now watch for signs that Ukraine’s military – which has proved dogged in defence – can now successfully counter-attack, which would raise the possibility of the unlikeliest of victories of Kyiv.

However, it could also mean Russia doubling down on its battlefield brutality, raising the civilian death toll and threat of extreme acts.