Vladimir Putin personally ordered a top secret spy operation to help a ‘mentally unstable’ Donald Trump win the 2016 election, according to leaked documents believed to be from the Kremlin.

The Russian strongman held a meeting with his spy chiefs and senior ministers in January 2016 where they agreed to support Trump in order to achieve Moscow’s objectives of sowing ‘social turmoil’ in the US, the papers suggest.

A decree bearing Putin’s signature ordered Russia’s three agencies to find practical ways to support the then-Republican frontrunner nominee, according to The Guardian who have seen the documents.

Vladimir Putin personally ordered a top secret spy operation to help a ‘mentally unstable’ Donald Trump win the 2016 election, according to leaked documents believed to be from the Kremlin

Putin’s expert department prepared a report recommending that he use ‘all possible force’ to ensure a Trump win in the November election of that year.

At the time, while he was a favourite for the Republican nomination, Trump was still considered a major outsider for the White House compared to his rival Hillary Clinton.

The leaked documents from the January 22 meeting have allegedly been shown to Western spy agencies who carefully examined them and believe them to be genuine.

Independent experts say the tone of the papers is consistent with the Kremlin’s style.

But Putin’s spokesman Dmitri Peskov dismissed the claims, saying it was a ‘great pulp fiction’.

The report, named ‘No 32-04 vd’ is classified as secret and says Trump is the ‘most promising candidate’ for Russia.

The US businessman is described as an ‘impulsive, mentally unstable and unbalanced individual who suffers from an inferiority complex’.

The documents also allude to compromising material the Kremlin holds on Trump from an earlier visit to Moscow.

They refer to ‘certain events’ during the reality star’s trips to Moscow. 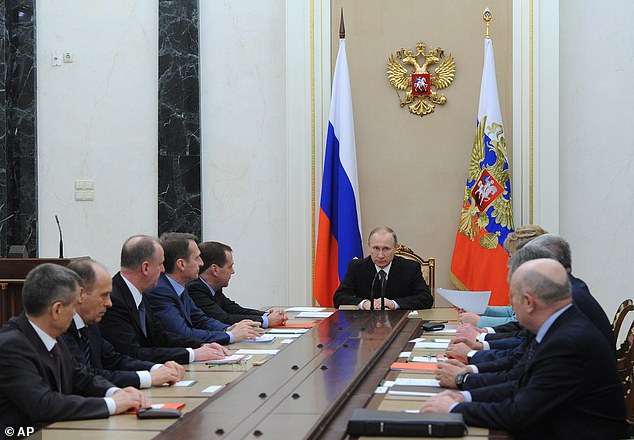 Putin’s expert department prepared a report recommending that he use ‘all possible force’ to ensure a Trump win in the November election of that year. Pictured: Putin at a Security Council meeting in 2016

Helping him secure victory ‘will definitely lead to the destabilization of the US’s sociopolitical system’, the report predicts.

A meeting led by Putin with his security officials and spy chiefs was definitely held in the Kremlin on the date of the alleged report.

A press release said the meeting covered the economy and Moldova.

But the leaked documents suggest the covert purpose of the discussions was the confidential plans to aid Trump in his election bid.

Putin’s expert department, which provides the president with analytical reports, often based on foreign intelligence, is believed to be behind the documents allegedly written by Vladimir Symonenko.

On January 14, 2016, Symonenko circulated a three-page executive report of his team’s findings.

It is not known what they discussed in the meeting on January 22 but Putin and his officials signed off a mult-agency plan to interfere in the US democratic process, the leaked documents suggest.