Putting on just 6lb at Christmas can harm your health

Putting on a few pounds at Christmas may seem part of the tradition.

But it is enough to cause drastic changes to your health, a study has found.

Scientists studied the effects of a ‘small amount’ of extra weight from feeding people a richer diet over several weeks.

They found adding just six pounds affected the heart, immune system and boosted the numbers of harmful bacteria living in the gut.

However, many will be pleased to hear, the researchers discovered that when the weight was shed most of the damage was undone.

Scientists found that adding just six pounds affected the heart, immune system and boosted the numbers of harmful bacteria living in the gut

Professor Michael Snyder and colleagues from Stanford University published the results of their study in the journal Cell Systems.

Professor Snyder said: ‘The goal here was to characterise what happens during weight gain and loss at a level that no one has ever done before.’

‘There were a huge number of changes, just with the kind of weight you might gain over the holidays that just occurred.’

The team found that the human body changed in dramatic fashion at the molecular level – with changes in bacteria populations, a rise in inflammation, and molecular changes associated with heart disease.

When the study participants lost the weight, most of the body’s systems mostly reverted to their original, pre weight-gain, states.

The study was based on 23 participants. Thirteen were insulin-resistant, and 10 were insulin-sensitive, or able to process insulin normally; all had body mass indexes that ranged from normal to overweight.

Professor Snyder said: ‘In the end, we literally made billions of measurements.’

The participants received a high-calorie diet, and after 30 days they had, on average, added six pounds. 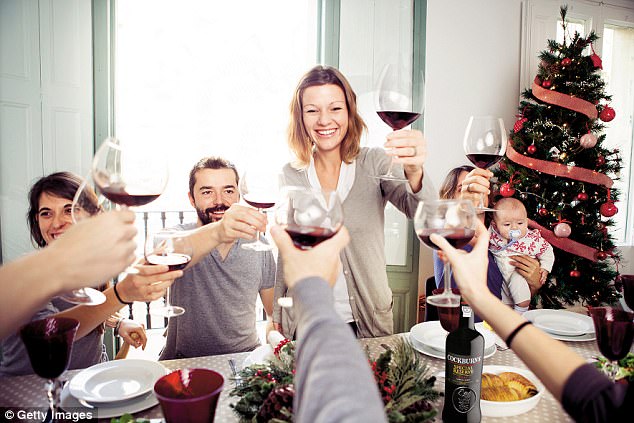 Changes they found included an increase in bacteria living in the gut associated with insulin resistance.

They also found a change in gene expression associated with an increased risk for a type of heart failure called dilated cardiomyopathy, which hinders the heart pumping blood efficiently.

Professor Snyder said: ‘That was quite surprising. I didn’t expect 30 days of overeating to change the whole heart pathway.

‘But this all fits with how we think of the human body — it’s a whole system, not just a few isolated components, so there are system wide changes when people gain weight.’’

‘For the most part’, after participants dropped the excess weight, their microbes, molecules and gene-expression levels bounced back to their normal levels.

Some changes to protein production in the body, associated with the weight gain did persist, Professor Snyder said.