After taking responsibility for the epic best picture flub at the Oscars last year, Tim Ryan of PricewaterhouseCoopers got down to business.

He grilled the partners who made the gaffe, then personally reached out to the dozens of people affected by it: The show’s producers, presenters and stage managers and the filmmakers behind ‘La La Land’ and ‘Moonlight.’

In the months that followed, PwC met with the academy many times to come up with new protocols and safeguards to prevent such a blunder in the future. Ryan revealed six new reforms to The Associated Press. They include a new process in which the celebrity presenter will confirm they have the correct envelope before stepping onstage, PwC partners attending rehearsals, as well as measures to quickly correct any mistake.

La La Land was accidentally announced as the Best Picture winner at last year’s Oscars. Now  PricewaterhouseCoopers has announced new measures to ensure against a repeat 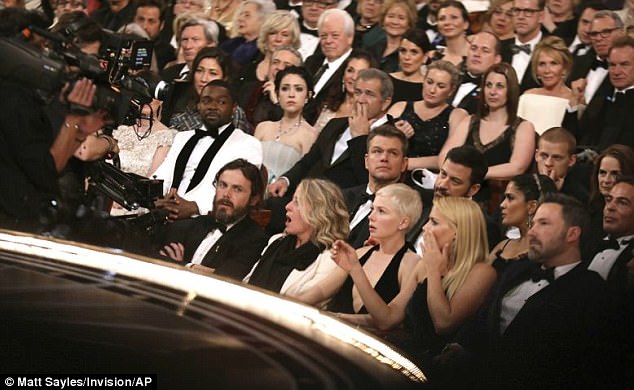 Last year’s mistake happened when a PwC partner mistakenly handed an envelope for the best actress winner category, which went to Emma Stone in ‘La La Land,’ to the presenters of the best picture category, Warren Beatty and Faye Dunaway. That resulted in ‘La La Land’ being briefly named best picture, before one of that film’s producers revealed the error and that ‘Moonlight’ had in fact won.

‘One of the most disappointing things to me was all the great work that had been done, not only last year but over the last 83 years, around accuracy, confidentiality integrity of that process,’ he said. ‘And where we got it wrong was on the handing over of the envelope.’

Ryan said Oscar voting procedures and the tabulation of nominees and winners won’t change. Instead, reforms focus on envelope rituals.

Ryan said he will be personally involved with Oscar operations this year as PwC’s U.S. chairman and senior partner.

The final change is one the academy immediately instituted last year: PwC partners are prohibited from using cellphones or social media during the show.

‘Our singular focus will be on the show and delivering the correct envelopes,’ Ryan said.

Besides tabulating votes for Oscar nominees and winners, PwC handles much of the Academy of Motion Picture Arts and Sciences’ accounting, including audits and taxes.

Film academy chief Dawn Hudson said that after reviewing the relationship between the two organizations, and given that the voting and secrecy around the Academy Awards were never compromised, the academy chalked up the envelope mistake to simple human error. 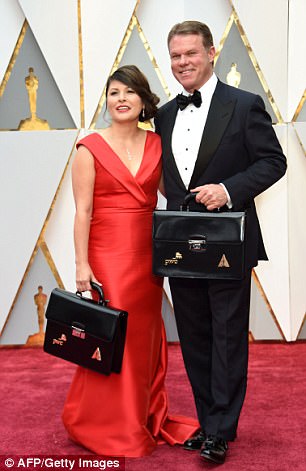 Martha L. Ruiz (left) an Brian Cullinan (right), the PwC partners in charge of the awards envelopes last year, will not be handing them out this year

Ultimately, academy officials and board members decided not to ‘throw out 83 years of flawless partnership over this, while huge, one human error,’ she said, adding that PwC helped build the digital voting system the academy has been using for the Oscars in recent years.

‘Let me tell you, I don’t think this error will ever happen again or would happen again,’ said Hudson, who was watching from the audience as the flub seemed to occur in slow motion onstage. ‘We put in a lot of protocols to make sure it won’t, but I don’t think it will anyway. I think everyone will be very focused on getting that right.’

‘My nature, just as a person, is healthy paranoia. But I also know in my head that we haven’t left any step undone. We owe that to the academy,’ he said. ‘While I feel very, very good about all the work that’s been done and the attention to detail that’s in place, our job doesn’t end until that curtain closes.’

Nominations for the 90th Academy Awards will be announced Tuesday. Winners will be revealed at the ceremony on March 4.