QAnon supporters told CNN in a bizarre interview on Friday that they believe former President Donald Trump will be reinstated as Commander-in-Chief after a military coup ‘like Myanmar.’

CNN reporter Donie O’Sullivan, who nearly exclusively covers topics of extremism and disinformation, spoke with QAnon believers at a rally in Ventura, California for a segment on Anderson Cooper 360.

‘What’s going to happen at some point is there are going to be arrests, and that will include the lying media and then there will be military tribunals,’ one woman said.

The woman went on to call Biden ‘a puppet president’ before insisting that ‘the military is in charge.’

‘It’s going to be like Myanmar, what’s happening in Myanmar. The military is doing their own investigation. At the right time they’re going to be restoring the republic with Trump as president,’ she said.

One woman, pictured, told CNN that the United States is ‘going to be like Myanmar’ as she called for a military coup 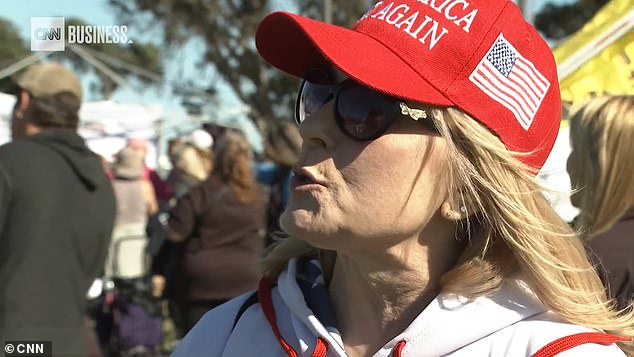 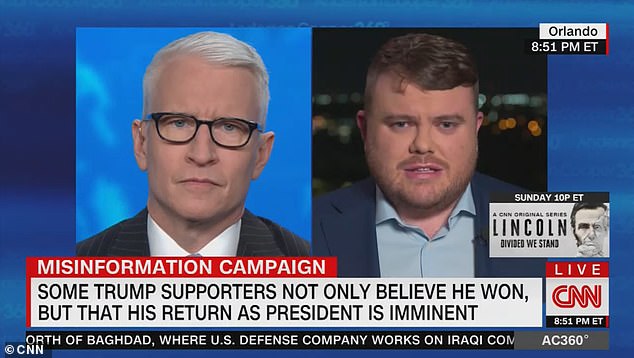 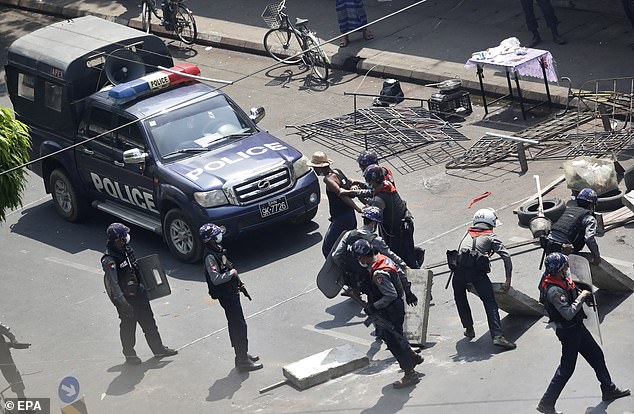 Riot police arrest demonstrators during a protest against the military coup, in Yangon, Myanmar on Saturday

Another woman echoed her sentiments, saying: ‘What’s going on in Myanmar right now? The government took over and they’re redoing the election.’

The second woman said she ‘absolutely’ would like to see a military coup ‘because the election was stolen from us.’

A third woman, wearing a Make America Great Again hat, said: ‘It is my hope that President Trump comes back as the 19th president of the United States under the 1776 and that he is inaugurated on March 4 and that is my hope.’

QAnon conspiracy theorists have reportedly misinterpreted an 1871 law and believe Ulysses S. Grant who was inaugurated on March 4, 1869 was the last legitimate president, according to O’Sullivan.

O’Sullivan then asked the woman if she would ‘feel foolish’ when Biden is still president on March 5.

‘Umm, then Trump has a different plan in play,’ she said.

The woman then repeated false claims that there was widespread election fraud, which she said was proven by MyPillow CEO Mike Lindell. 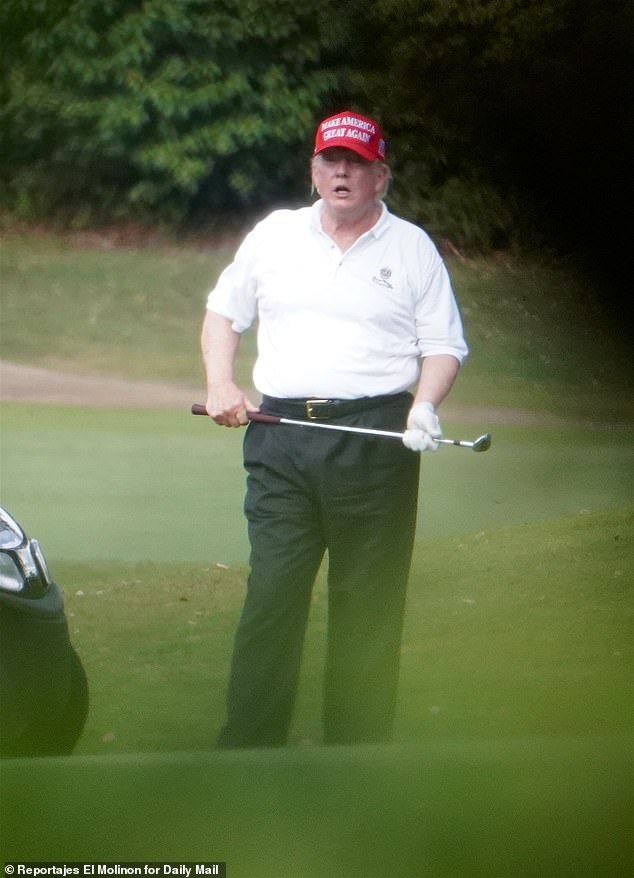 The District of Columbia Organic Act of 1871, cited as the basis for the conspiracy theory, was a law that repealed the individual charters of the cities of Washington and Georgetown and established a new territorial government for D.C.

QAnon supporters believe that the 1871 law secretly turned the federal government into corporation by misinterpretation the meaning of the term municipal corporation used in the it.

Conspiracy theorists believe that the law made every president inaugurated and every constitutional amendment passed in the years since illegitimate. 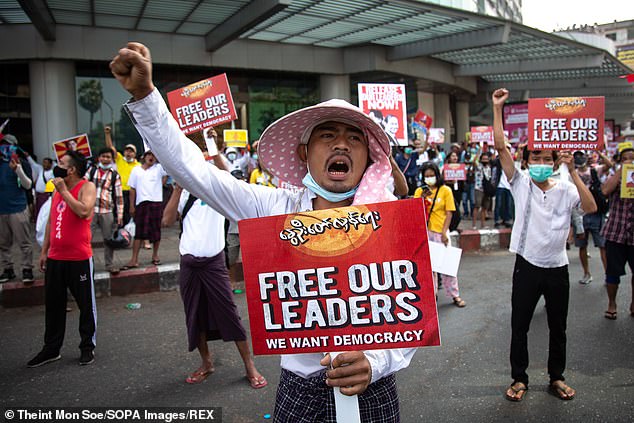 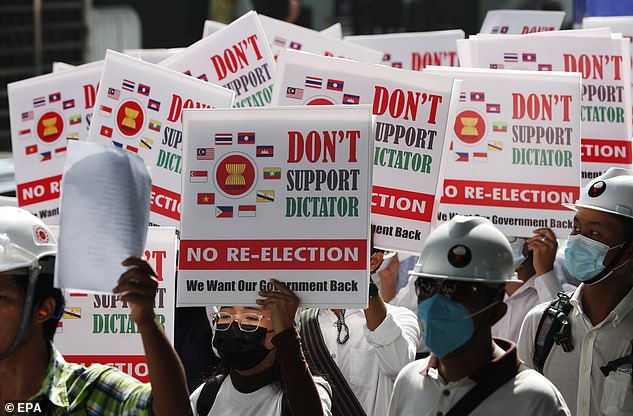 Demonstrators hold placards during a protest against the military coup, in Yangon, Myanmar, on Saturday 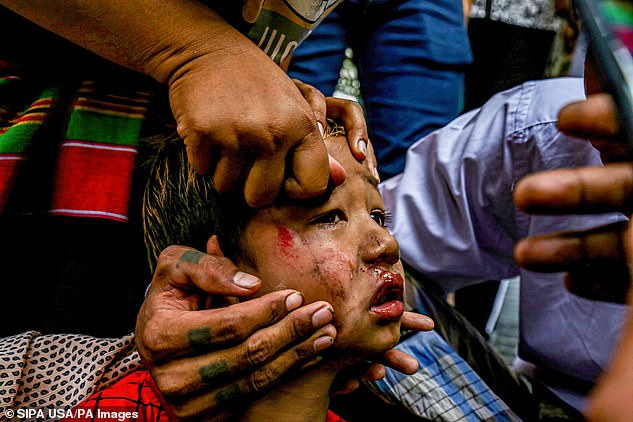 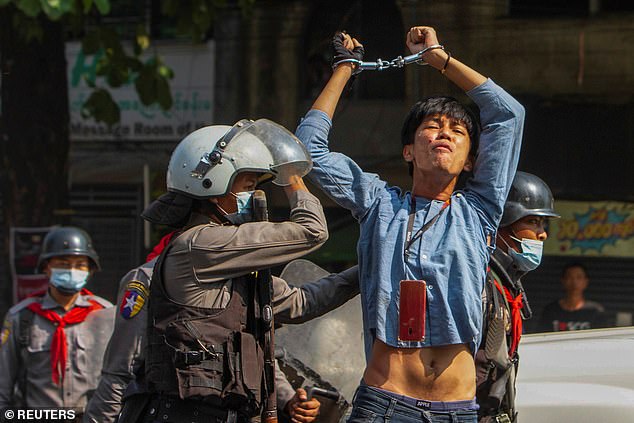 A pro-democracy protester is detained by riot police officers during a rally against the military coup in Yangon, Myanmar on Saturday 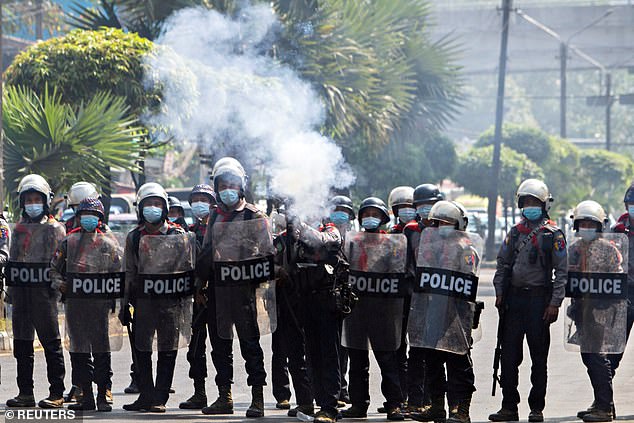 A riot police officer fires a teargas canister to disperse pro-democracy protesters taking part in a rally against the military coup in Yangon, Myanmar on Saturday 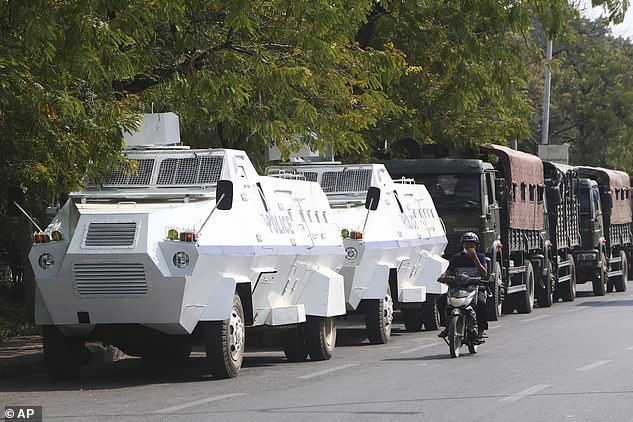 Police armed vehicles park along a main road after protesters were dispersed in Mandalay, Myanmar on Friday

QAnon supporters believe that President Franklin D. Roosevelt then handed the country over to sinister investors when he ended the gold reserve in 1933, the same year that the original inauguration date of March 4 changed to January 20.

CNN reported that nearly 5,000 National Guard soldiers will remain in D.C. through March 12 partly over concerns of possible violence because of the conspiracy theory.

Earlier this month, President Joe Biden threatened to reimpose sanctions on Myanmar as his administration initially debated whether to call the military takeover a ‘coup.’ 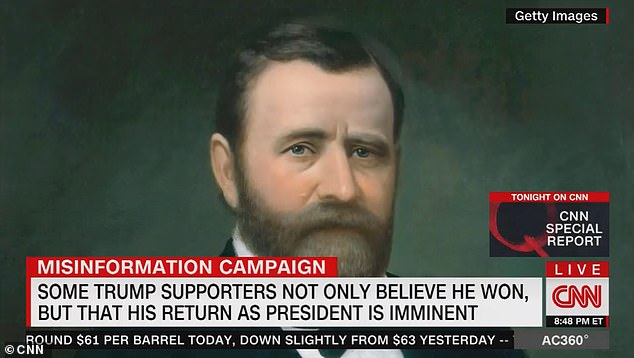 QAnon supporters believe Donald Trump will again be America’s ’19th president,’ viewing all others after Ulysses S. Grant as illegitimate 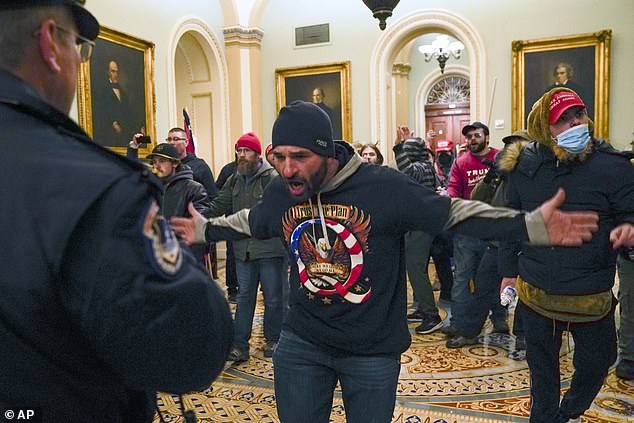 QAnon conspiracy theorist Doug Jensen, center, confront U.S. Capitol Police in the hallway outside of the Senate chamber at the Capitol in Washington on January 6 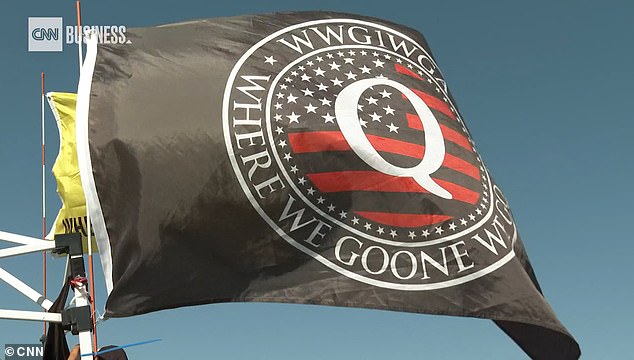 Myanmar’s army took power of the country early on February 1 and declared a state of emergency after detaining de facto leader Aung San Suu Kyi along with members of her party.

On February 11, Biden took ‘concrete actions to hold those responsible for the February 1 coup,’ according to a White House press release.

Western nations including the United States and the UK have imposed sanctions against Myanmar and the country’s United Nations ambassador has strongly opposed the military coup in his country.