A Qantas flight that made an emergency landing in Azerbaijan has sparked delays around the world with Aussie families uncertain they will make it home for Christmas.

The A-380 aircraft was heading from Singapore to London when the plane was forced to change course to Heydar Aliyev International Airport at Baku on Friday.

Pilots had received an intermittent fault indicator in the cockpit prompting them to make the last-minute detour.

Stranded passengers don’t know if they will make it home in time while travellers in London said they were meant to catch the plane to Australia after it landed.

Now they have been told they likely won’t be flying out until Christmas Day with the news throwing their festive celebrations into chaos.

In another blow a different Qantas flight was cancelled 10 minutes before it was due to depart Bali leaving more passengers upset on the other side of the globe. 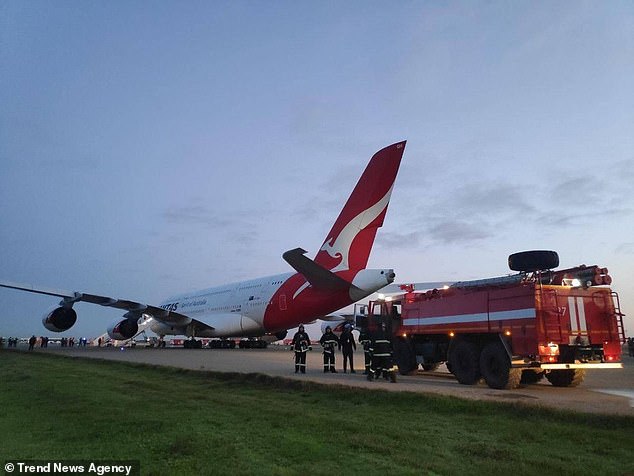 Nik Long is among the holidaymakers stranded in Baku and said he was on the next flight out that had been scheduled to leave at 10.30pm on Saturday.

‘Most of us are still in limbo waiting for details for connecting flights,’ he told Sydney Morning Herald.

‘So, Christmas may be spent in the air [or in] immigration.’

One passenger, who asked to remain anonymous but was meant to catch the plane once it touched down in London, said they would miss Christmas celebrations.

‘We were [meant] to fly tonight, 23 December, to Sydney,’ he said. ‘The whole intent was to be back home for Christmas.

‘Now it looks like we may fly out on the 25th, arriving home on Boxing Day … It’s very upsetting for my family, and I’m a bit stumped.’

A Qantas spokesperson said the company had sent out a relief flight and deployed engineers from London to Azerbaijan to restore the plane.

Passengers stranded in Baku complained they waited seven hours before they were ushered to a nearby hotel while the airline worked on planes to get them out.

One person said passengers were forced to hand over their passports to Azerbaijani authorities so they could be ‘taken somewhere for the approval process’.

Qantas has left travellers upset in Bali after the airline cancelled one of its flights just minutes before passengers were set to board the plane.

Holidaymakers were told they would be accommodated in hotels until another flight was found for them. 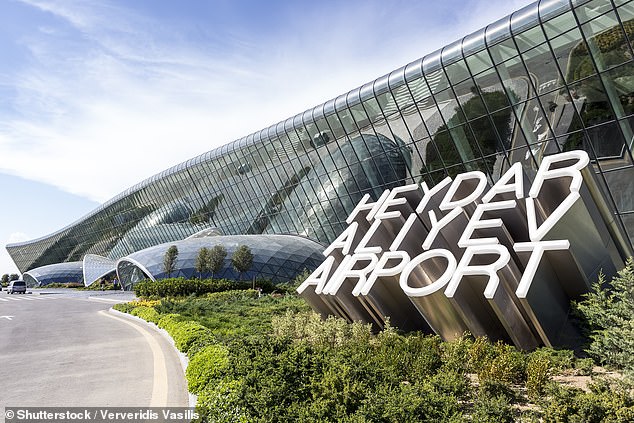 Qantas pilots had received an intermittent fault indicator in the cockpit prompting them to make the last minute detour and land in Baku (pictured, Heydar Aliyev Airport in Baku, Azerbaijani)

Passenger William Mansell said the flight had already been delayed because of bad weather before it was cancelled because staff hadn’t been given a sufficient break.

He said no apology had been offered by the airline and that he was expected to return to Australia at 6.30am on Christmas morning.

A Qantas spokeswoman said the flight had been delayed due to a combination of factors.

‘As a result of unexpected poor weather in Bali on Friday, one of our flights from Sydney diverted to Jakarta,’ she said.

‘Due to crew rest requirements the flight was unable to continue on to Bali until Saturday. This also delayed the return service from Bali to Sydney.

‘While we know this would have been frustrating for passengers, our teams are getting them on their way as fast as possible.’

The airline also released a statement following the emergency landing of the A-380 at Baku on Friday.

‘The aircraft intermittently alerted the pilots to the potential of smoke in the cargo hold,’ a spokesperson said.

‘Although it was considered likely to be a sensor fault, the aircraft diverted to Baku as a safety precaution.

‘Initial investigations have found no evidence of smoke in the cargo hold. We thank customers for their patience and we are working to get them on their way as quickly as possible.’