By Eleanor Dye For Mailonline

Qantas passengers said they showed ‘a bit of Dunkirk spirit’ when their plane from Singapore to Heathrow was forced to make an emergency landing in Azerbaijan – after it was already delayed by 48 hours.

The flight from Singapore to London Heathrow had been due to land shortly after 6am on December 23, but stopped in Baku due to a warning light indicating a possible fire in the cargo hold.

Passengers said they spent hours at Baku airport waiting for visas and didn’t know when they would be able to return to London as information was not immediately given about a relief plane.

It comes amid travel chaos for those already at home in the UK – as rail strikes have forced passengers to rush to catch trains before services come to a halt.

Qantas passengers said they showed ‘a bit of Dunkirk spirit’ when their plane from Singapore to Heathrow was forced to make an emergency landing in Azerbaijan. Pictured: A fire engine by the plane 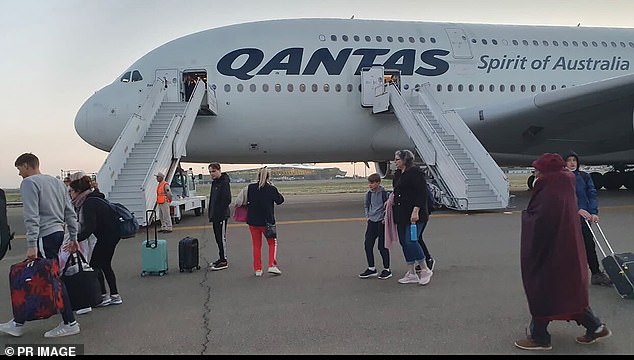 Passengers said they spent hours at Baku airport waiting for visas and didn’t know when they would be able to return to London. Pictured: Passengers disembark from the diverted plane

And at major airports Border Force staff are taking strike action as the armed forces have been brought in to check passports.

The replacement plane is now due to land on Christmas morning, as passengers mourned the loss of Christmas eve events at home with their families.

Clare Kennett from West Sussex described the frustration at the long wait she and other passengers had to endure, but said the captain had done the right thing in making a diversion to land elsewhere and get the plane checked out.

The 63-year-old IT consultant-turned-chilli farmer praised the Qantas crew, but said information had been lacking from the company in the early stages of the delay.

She said passengers spent hours at Baku airport awaiting visas so they could go to a hotel, and were also left wondering about the wait for a relief plane to take them to London.

Ms Kennett, who had enjoyed a three-week holiday which involved surprising her sister in Melbourne for her birthday, said they were left with ‘no explanation’ as to what was going on for a period of time at the hotel, adding that there were ‘a lot of people very upset’.

She said: ‘Qantas as a company have just sent short factual emails which appears very cold at Xmas.

‘We were all very frustrated by the 10 or 11 hours that a lot of people spent at the airport.

‘The crew were great. They gave us food, were talking to us, they were playing with the kids and just trying to make light of the situation. They were really good.

‘And even the captain was out with the flight deck crew helping with the passports and getting the visas organised. So it really was a bit of Dunkirk spirit.

‘It just took so long and everyone was really tired.’

A representative from Qantas was eventually sent to the hotel from Sydney to explain that the delay of the relief plane getting to them was due to permissions for the flight path to Baku, and the delayed departure was due to the curfew cut-off time at Heathrow.

She said: ‘The reason why the rescue flight took so long to get here and therefore missed its window at Heathrow was because of the machinations of trying to get approvals to fly in a direct route from Sydney to here (Baku).’

Ms Kennett said she had sympathy for people who were due to get connecting flights onward from London, and was grateful she was not too badly affected.

The replacement plane is due to land at Heathrow early on Christmas Day morning, she said.

‘I’ve missed out on a few events, Christmas Eve night raffle at the pub – I’ll do it next year,’ she laughed.

She said passengers had not been told officially whether the warning light indicating a possible fire was simply a faulty indicator, but that she had heard no smoke was detected in the cargo hold.