Coronavirus quarantine could be slashed to just seven days amid fears Britons are flouting the tough 14-day requirement.

The government’s Covid-19 taskforce is understood to be considering slashing self-isolation for those who come into contact with infected individuals to between a week and 10 days.

Concerns have been rising that people are failing to cooperate with Test & Trace due to the prospect of a lengthy period unable to work or go out.

The quarantine changes – which could come into force within weeks but would not apply to those who test positive for the disease – come amid Tory calls for Baroness Harding to quit. Sir Bernard Jenkin said this morning that the testing tsar should take a ‘well earned break’ so the service can ‘move up several gears’.

Boris Johnson admitted that the service needed to get better last week and is believed to have been infuriated by bungles with figures recently.

Northern Ireland Secretary Brandon Lewis told Sky News that ‘no final decisions’ have been taken. ‘This is going to be scientifically led,’ he said.

There are also claims that City dealmakers, hedge fund managers and company bosses flying into the UK could be exempted from border quarantine rules to help boost ‘global Britain’ after Brexit.

But Mr Lewis played down the idea of high-flying executives being specifically let off quarantine. ‘Any changes that are made will apply to everybody,’ he said. 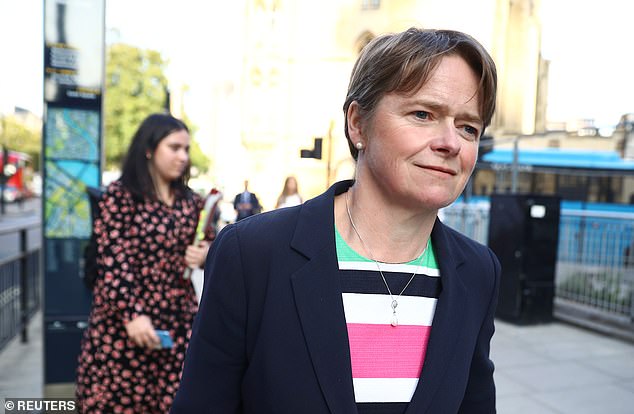 Test and Trace – headed by the Conservative peer Baroness Harding (pictured) – last week hit a record low with just 59.6 per cent of the contacts of people who tested positive for the disease being successfully contacted and told to self-isolate

Only one in ten stay at home for two weeks after being told to self-isolate by NHS Test and Trace, Sage documents revealed last week.

Of those who were told they had been in close contact with a confirmed Covid-19 case, just 10.9 per cent isolated for the following 14 days.

The alarming figures undermine the premise of the Test and Trace system, which aims to prevent the spread of the virus.

The main reasons people gave for not properly quarantining were not developing symptoms, not thinking it was necessary to stay away from those outside the household, or popping to the shops for food.

The figures were revealed in documents by Sage – the Scientific Advisory Group for Emergencies.

The study, carried out by King’s College London, was discussed at their meeting in September.

‘Compliance is not as high as we would like and self-isolation is key if we are going to beat the virus,’ a No10 source told the Sunday Telegraph.

It comes after Test and Trace – headed by the Conservative peer Baroness Harding – last week hit a record low with just 59.6 per cent of the contacts of people who tested positive for the disease being successfully contacted and told to self-isolate.

In a further sign of the unrest at Westminster, senior Tory backbencher Sir Bernard Jenkin launched a scathing attack on the performance of the system, saying public consent and co-operation was ‘breaking down’.

Speaking to Sky News’ Sophy Ridge show, Sir Bernard said Lady Harding had been a ‘tremendous asset’ but the reins should now be handed to a ‘very senior military person’ who could handle the logistics involved.

‘The Test & Trace operation clearly needs to move up several gears,’ he said.

Writing in The Sunday Telegraph, Sir Bernard said there was a ‘vacuum of leadership’ at the top of the organisation and called for a change that was ‘visible and decisive’ with a senior military figure being put in charge.

‘There is a spaghetti of command and control at the top, which is incapable of coherent analysis, assessment, planning and delivery,’ he wrote.

‘The immediate priority is to fill the vacuum of leadership in Test and Trace, which is destroying cooperation and compliance.

‘Government harnessed the military to regain control in the foot and mouth crisis; the Prime Minister should follow that example today, by installing a single leader, a three or four star military commander with a reputation for handling complexity under stress.

‘Test and trace should then be tasked with generating and sustaining a campaign targeted at achieving behaviour change by consent.’

Sir Bernard, who chairs the Liaison Committee of senior MPs, added that Lady Harding should be given a ‘well-earned break’ so she and others could ‘reflect on the lessons learned so far’.

But Northern Ireland Secretary Brandon Lewis used his own interviews this morning to dismiss calls for Lady Harding to go.

He said Test & Trace had ‘come on so much in the last few months’.

In response, the Department of Health and Social Care acknowledged there were areas where the service needed to improve, but said people should be ‘talking it up, not down’.

‘Dido Harding and her leadership team – drawn from the military, public and private sectors – have built the largest diagnostic industry the UK has ever seen,’ a spokesman said.

‘It is the equivalent of building an operation the size of Tesco in a matter of months. The NHS Test and Trace system has built a testing capacity of 400,000 tests a day, from a starting point of 2,000 a day in March.

‘This capacity is bigger per head than France, Germany, Italy and Spain and we have contacted over 1.1 million people and asked them to self-isolate.

‘We need to improve in areas and we are very much focused on that, but we should be talking it up, not down.’

Professor Sir Ian Diamond, the UK’s national statistician, confirmed officials had been looking at cutting the length of coronavirus self-isolation.

Appearing on the BBC Andrew Marr Show, he was asked if the Scientific Advisory Group for Emergencies had looked at the issue.

Sir Ian said: ‘I know that there is work going on to look at the length of isolation and certainly it has been discussed at various times, and I know that in the four nations there is work.’

He said survey work from the Office for National Statistics (ONS) would inform such discussions.

Sir Ian highlighted a King’s College study that found about 70 per cent of people said they would self-isolate if they had symptoms, but a ‘very much lower proportion’ who had had symptoms isolated for the full period.

‘it’s critical, because self-isolation is an incredibly important part of the way in which we will control this virus.’ 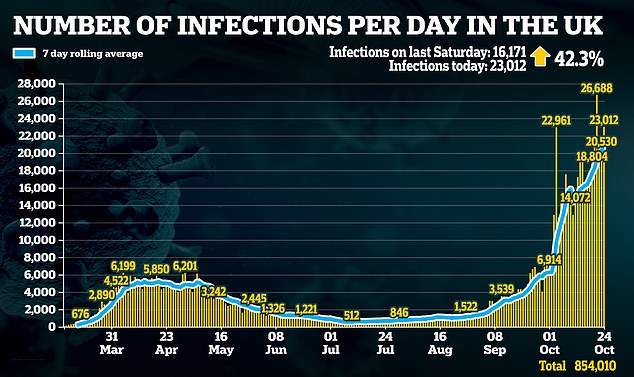 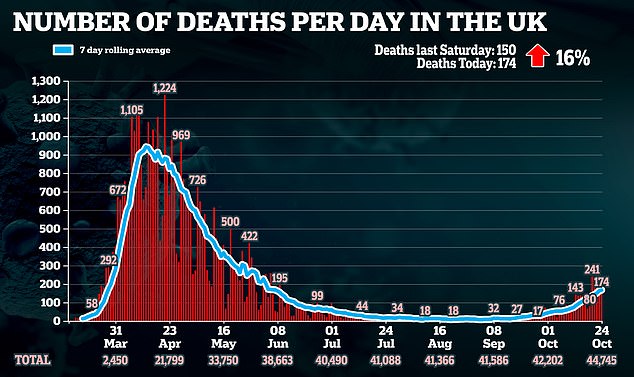 Business Secretary Alok Sharma and Trade Secretary Liz Truss are ‘sympathetic’ to demands for an exemption for international business travellers, according to the Sunday Times.

Currently there are extremely limited exemptions, mainly for the armed forces and truck drivers.

‘It seems ridiculous that people who are coming to the UK for five or six meetings in a day and then flying out are forced to quarantine, especially when most of them come in private jets and have a chauffeur-driven car,’ a government source told the Sunday Times.

‘The changes will need to be easy to implement and police because what we don’t want is for people to come to London for one day of meetings and then head  off for five days sightseeing.’

But it would infuriate ordinary families, who need to isolate for 14 days on returning from half-term holidays or face a £1,000 fine.

Lucy Powell, the shadow business minister, said: ‘It beggars belief that ministers are focusing on bending the rules for high net worth individuals rather than fixing their broken test, track, trace and isolate system.’