The Queen is looking for a new director of travel to ensure royals use ‘efficient’ and ‘cost effective’ flights.

The Director of Royal Travel vacancy – with an £85,000-a-year salary – comes in the wake of the storm over the Duke and Duchess if Sussex using private jets.

The successful applicant will be based at Buckingham Palace working 37.5 hours a week, and manage the taxpayer-funded royal travel for Her Majesty and other members of the royal family.

The Duke and Duchess of Sussex disembark from their plane on their arrival in Suva, on day one of the royal couple’s visit to Fiji 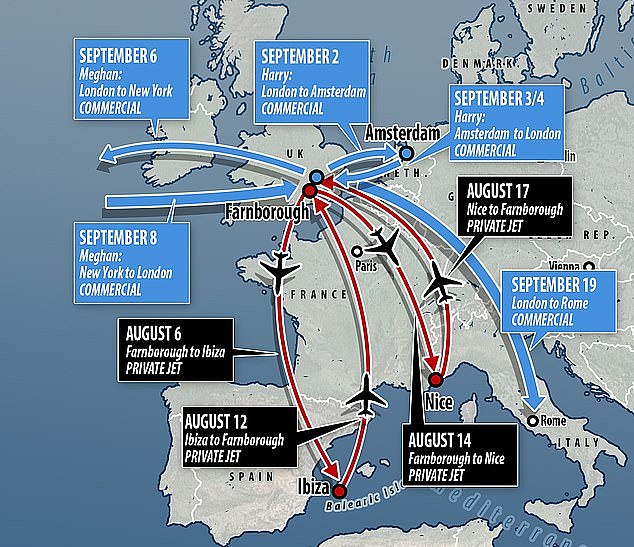 The Director of Royal Travel will organise ‘air travel’ as well managing and scheduling the ‘Royal Train trips’ which have previously cost the taxpayer tens of thousands of pounds.

However, the crucial part of the role is to ‘researching and negotiating value for money contracts and options for travel.’

A source said it will be an ‘essential’ part of the role after recent royal accounts revealed that they spent £4.6millon last year on travel alone.

A royal source said: ‘This is a very senior position, looking after a very important part of household operations.

‘It’s an essential part of the role that candidates are able to plan the right travel options and negotiate value for money contracts.’

Patrick Lacey, the current director, has led the department since July 2011.

Harry and Meghan faced criticism after it was claimed they flew privately four times in 11 days during the summer.

Among those times included a 1 hour 40 minute private flight to the private holiday home of singer Sir Elton John in Nice. 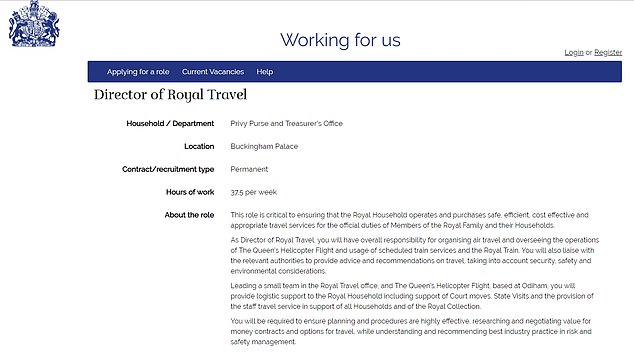 The Department for Business, Energy and Industrial Strategy says 2.52kg of carbon dioxide is emitted for every litre of aviation turbine fuel burned.

Harry defended his use of private jets, saying he needed to ensure that his family was safe.

The Duke and Duchess of Cambridge were spotted on a budget £73-a-head FlyBe plane in late August during a trip to Balmoral.

The majority of Prince of Wales’ visits abroad also saw him travelling by charter flights while his staff flew on scheduled flights, topping the list of less efficient royals.

The Prince of Wales and the Duchess of Cornwall undertook the most expensive overseas tour, spending £416,576 on a visit to Cuba and the Caribbean in March.

Palace chiefs at the time, said the trip was undertaken at the request of the Foreign Office as is standard for all overseas trips.

The royal couple, both now in their 70s, visited seven countries over 11 days and carried out 57 engagements.

Prince Charles also took an individual trip to Wales in December 2018 by Royal Train which cost £17,000 while an individual visit Scotland in January 2019 came to the same sum.

The royals spent almost £200,000 on private jets to take them to and from their homes in Scotland, one of which cost £28,911 to fly to Birkhall in the Highlands and back again. 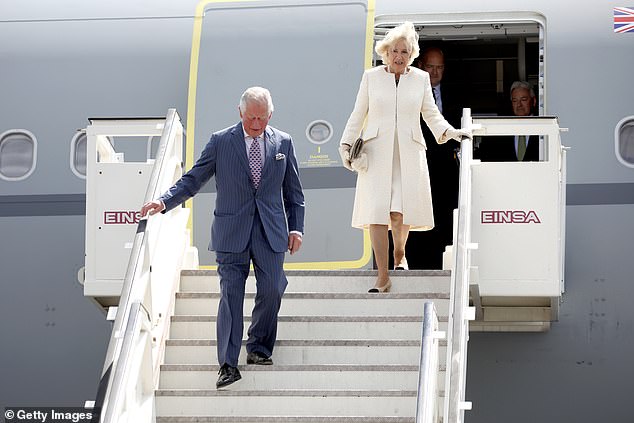 Prince Charles and Camilla took a flight to Berlin, Germany in May this year

The job advert reads: ‘This role is critical to ensuring that the Royal Household operates and purchases safe, efficient, cost effective and appropriate travel services for the official duties of Members of the Royal Family and their Households.

‘As Director of Royal Travel, you will have overall responsibility for organising air travel and overseeing the operations of The Queen’s Helicopter Flight and usage of scheduled train services and the Royal Train.

‘You will also liaise with the relevant authorities to provide advice and recommendations on travel, taking into account security, safety and environmental considerations.

‘Leading a small team in the Royal Travel office, and The Queen’s Helicopter Flight, based at Odiham, you will provide logistic support to the Royal Household including support of Court moves, State Visits and the provision of the staff travel service in support of all Households.

‘You will be required to ensure planning and procedures are highly effective, researching and negotiating value for money contracts and options for travel, while understanding and recommending best industry practice in risk and safety management.’