Queen carries out her first public royal engagement since before lockdown

The Queen is today carrying out her first public engagement outside of a royal residence in seven months, since before the coronavirus pandemic gripped the nation.

The 94-year-old monarch was joined by her grandson the Duke of Cambridge at the Defence Science and Technology Laboratory (Dstl) at Porton Down near Salisbury to meet scientists providing vital support in the UK’s response to the Covid-19 outbreak.

The royal pair were also being introduced to staff involved in the rapid response to the Novichok poisoning attack in Salisbury in 2018.

It is the first time the Queen has ventured from a royal residence, outside of her household of reduced staff – dubbed HMS Bubble – to carry out her duties as head of state since before lockdown.

Her Majesty flew to the site in a helicopter, while Prince William arrived by car.

The Queen knighted Captain Sir Tom Moore for his fundraising in July in the grounds of Windsor Castle, where she also watched a mini socially-distanced Trooping the Colour for her official birthday in June.

She spent lockdown at the Berkshire residence for her safety, but has been busy behind closed doors, carrying out telephone audiences, video calls and dealing with her red boxes of official papers.

The Queen donned a blush pink coat as she ventured out of her ‘HMS Bubble’ today, for a trip to the Energetics Analysis Centre at Porton Down science park near Salisbury 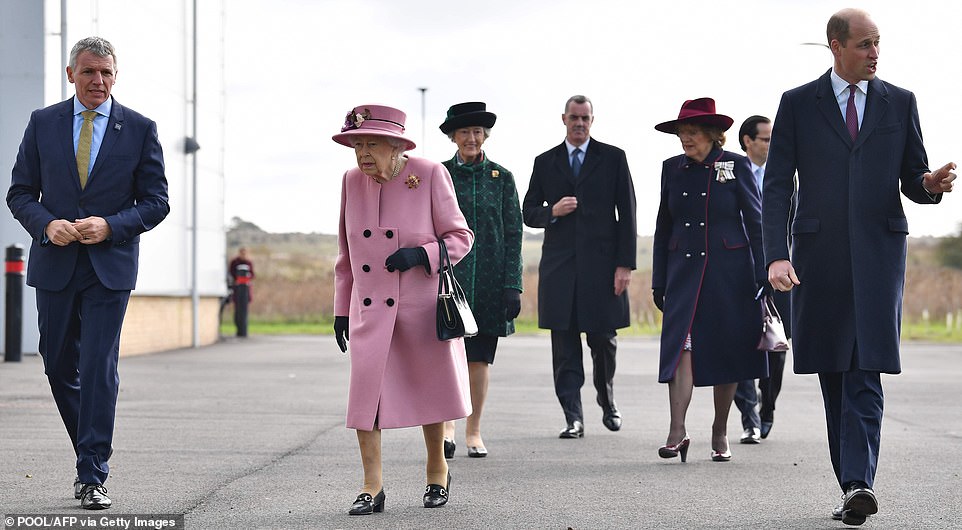 The 94-year-old monarch, wearing a Stewart Parvin old rose cashmere coat teamed with a matching hat by Rachel Trevor Morgan, was joined by her grandson the Duke of Cambridge 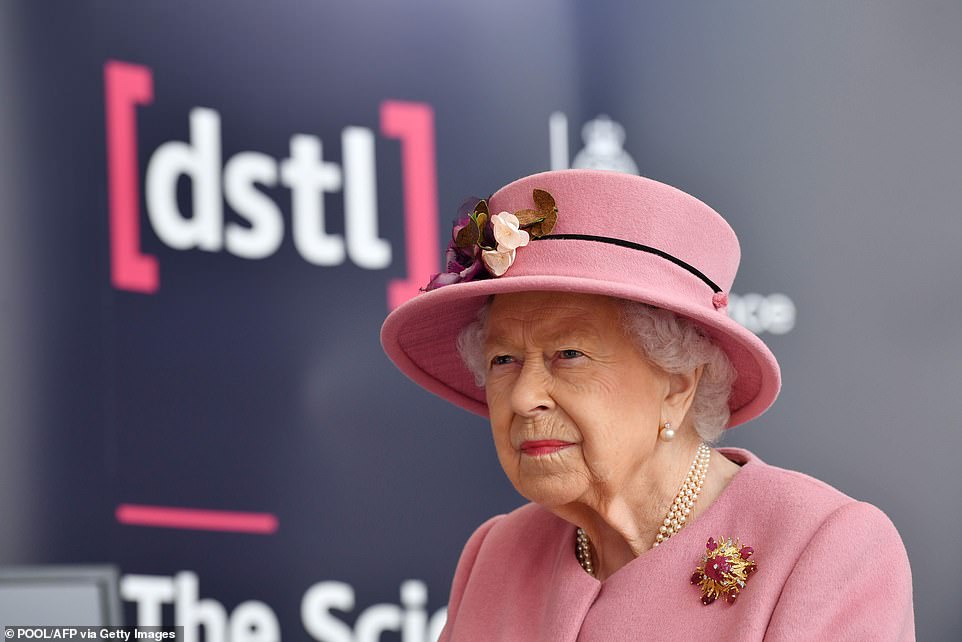 The Queen and Prince William saw displays of weaponry and tactics used in counter intelligence, a demonstration of a Forensic Explosives Investigation and met staff who were involved in the Salisbury Novichok incident 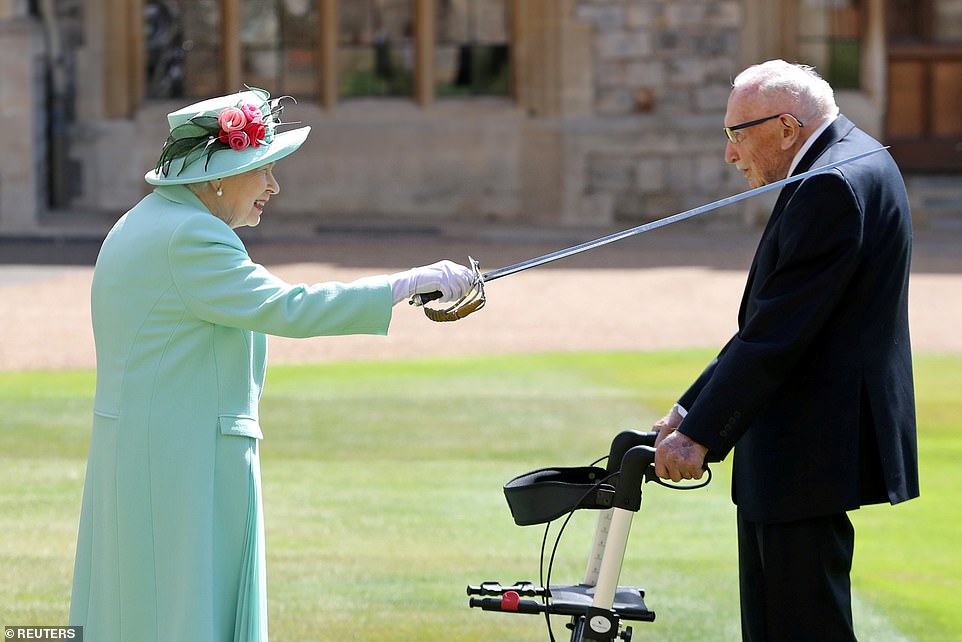 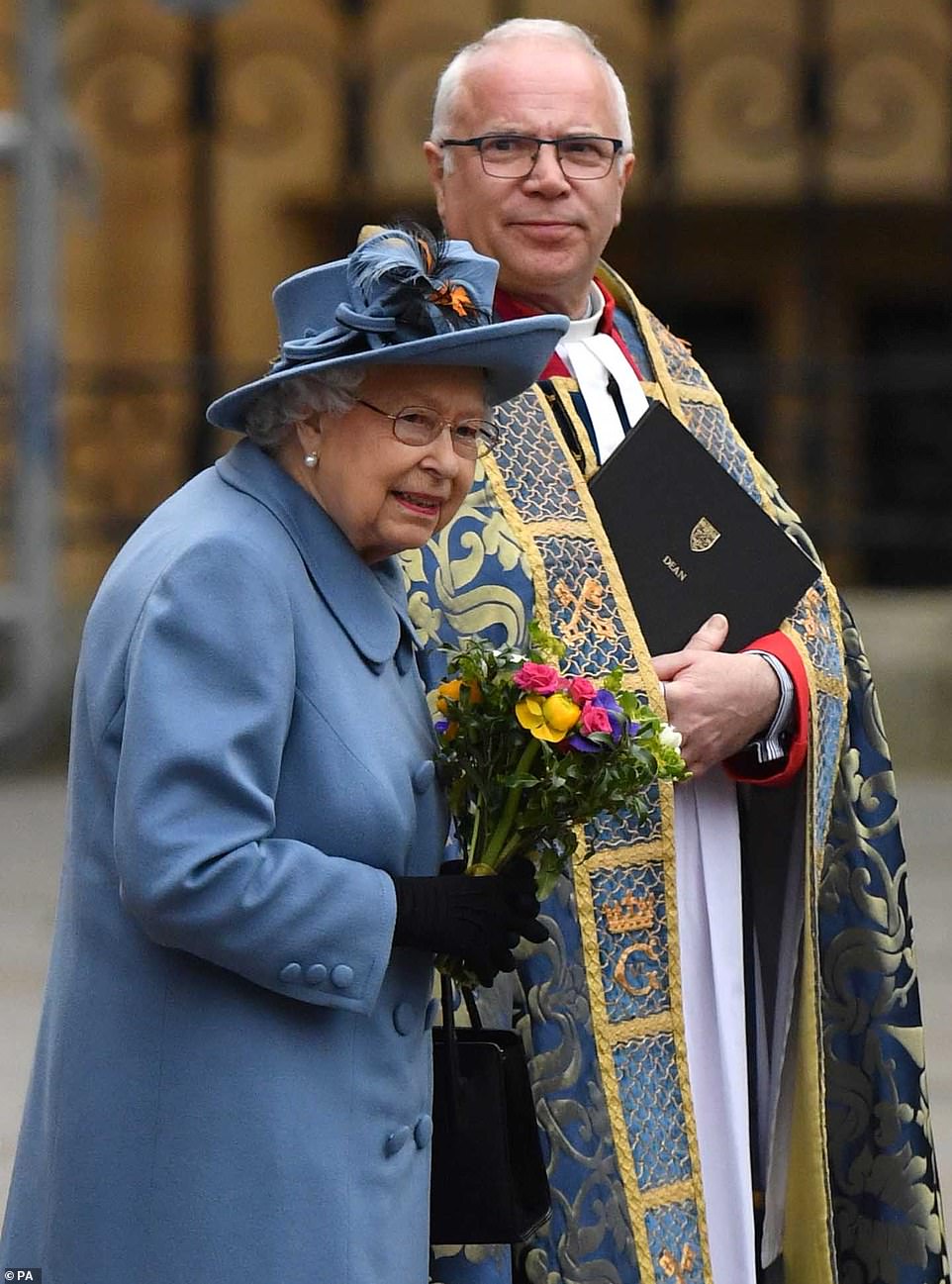 The Queen was last at an official public engagement outside of a royal residence when she joined the royal family for the Commonwealth Day service at Westminster Abbey on March 9, pictured

Heightened safety precautions were taken ahead of the visit to protect the Queen against coronavirus.

All 48 people who were due to come into close contact with the monarch and the duke were tested for Covid-19 by Dstl.

Small groups of those taking part in the royal visit were arranged two metres apart for social distancing.

A Buckingham Palace spokeswoman said: ‘Specific advice has been sought from the medical household and relevant parties, and all necessary precautions taken, working closely with Dstl.’

But the Salisbury engagement comes amid a resurgence of the virus, as the country battles a second wave and stricter restrictions for some areas.

The Queen, whose eldest son the Prince of Wales contracted a mild form of coronavirus, delivered two rare televised addresses to the nation just weeks apart during the first wave of the Covid-19 pandemic.

She reassured the country that the virus would be overcome, telling those in isolation: ‘We will meet again.’

In another speech to mark the 75th anniversary of VE Day, she told how the message at the end of the war in Europe was ‘never give up, never despair’.

The Queen was last at an official public engagement outside of a royal residence when she joined the royal family for the Commonwealth Day service at Westminster Abbey on March 9.

It was the Duke and Duchess of Sussex’s final public appearance before they quit as senior working royals for a new life in the US.

The monarch travelled to Balmoral for her private summer break and then spent a few weeks in Sandringham before returning to Windsor on October 6. 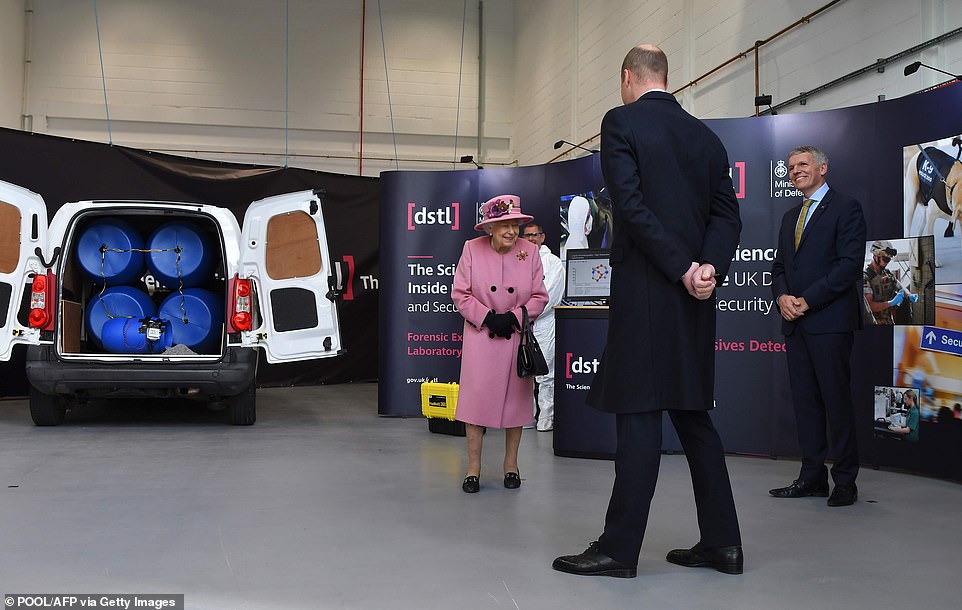 The Queen, William and Dstl Chief Executive Gary Aitkenhead (right) viewed a demonstration of a Forensic Explosives Investigation with a model explosive device in a vehicle 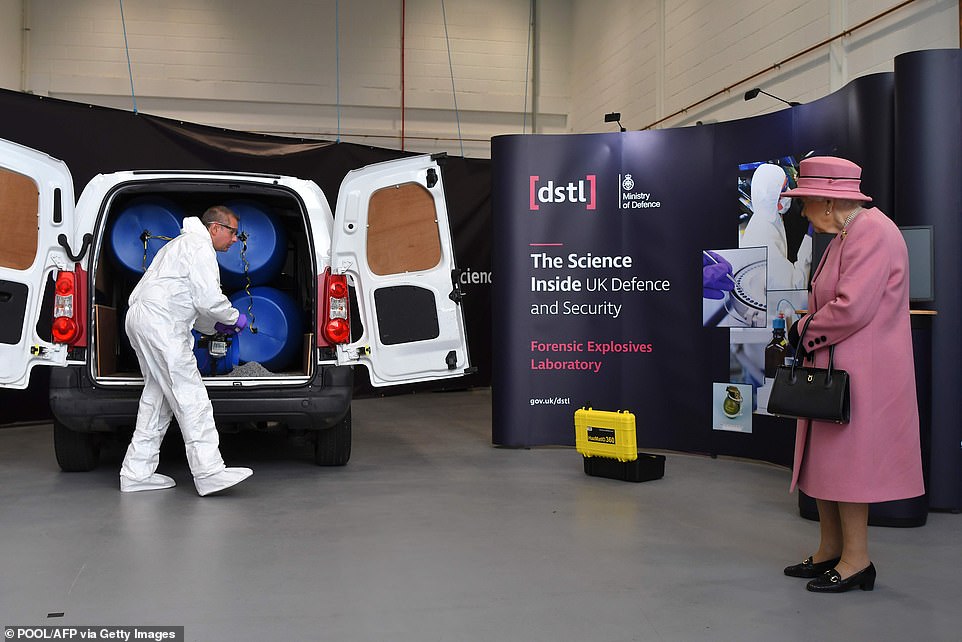 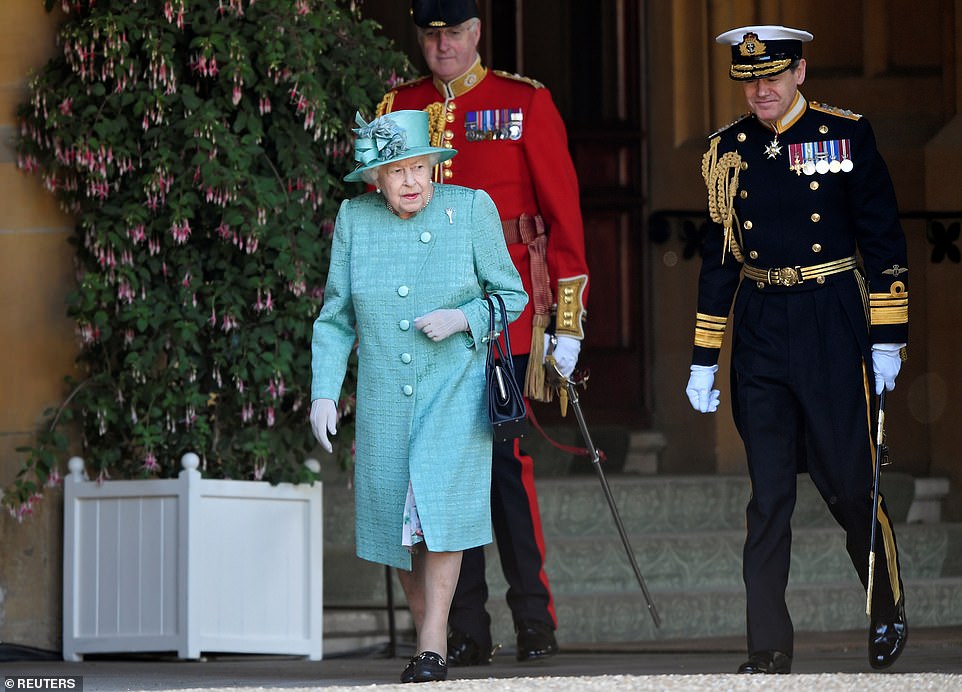 The Queen, 94, recycled a turquoise coat and matching hat to mark her official birthday at Windsor Castle on June 13

The Queen and William were greeted by Dstl’s chief executive Gary Aitkenhead for a tour of the Energetics Enclosure to see displays of weaponry and tactics used in counter-intelligence.

They were also shown the £30 million state-of-the-art Energetics Analysis Centre to meet counter-terrorism staff and see a demonstration of a forensic explosives investigation.

The pair then spoke to those involved in identifying the nerve agent following the Novichok incident, and those who worked on the decontamination clean-up operation.

As she signed the guest book she joked: ‘Well, it proves we’ve been here, doesn’t it?

Russian intelligence has been accused of being behind the attempted nerve agent assassination of former Russian spy Sergei Skripal and his daughter Yulia in Salisbury.

Dawn Sturgess and her partner Charlie Rowley fell ill in nearby Amesbury months after the attack, and Ms Sturgess later died after coming into contact with a perfume bottle believed to be linked to the case.

Military teams spent 13,000 hours on the clean-up. They took 5,000 test samples from across Salisbury and nearby Amesbury during the 355-day operation.

In recognition of their work, the duke was presenting the Army’s Headquarters South West with the Firmin Sword of Peace for going above and beyond their normal duties in the community.