Camilla looked chic in a black coat as she arrived at the Royal Osteoporosis Society offices in Bath.

The Queen Consort visited the newly opened offices to speak to staff, volunteers and the helpline team as she is a long term supporter of the charity.

In 1997, the royal became a patron of the charity and she was President of ROS up until the accession of His Majesty The King.

Camilla was greeted by Lord Lieutenant for Somerset, Mohammed Saddiq, during her visit and she later joined a reception of 120 invited guests who focus on highlighting ROS’s work and impact.

Her Majesty first became a supporter of the charity in 1994, when her mother died as a result of osteoporosis.

Camilla’s grandmother also suffered from the disease, and passed away in 1986.

The royal was recognised for her work with the charity and later became President of the Royal Osteoporosis Society in October 2001.

In 2007, Camilla even received the Kohn Foundation Award in recognition of her contribution to raising awareness of osteoporosis. 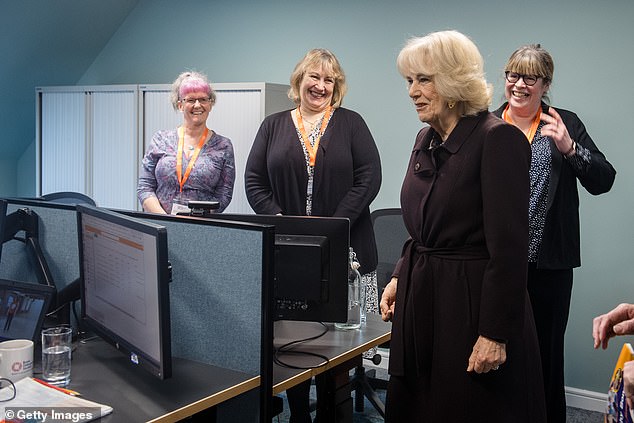 The Queen Consort visited the newly opened offices to speak to staff, volunteers and the helpline team as she is a long term supporter of the charity 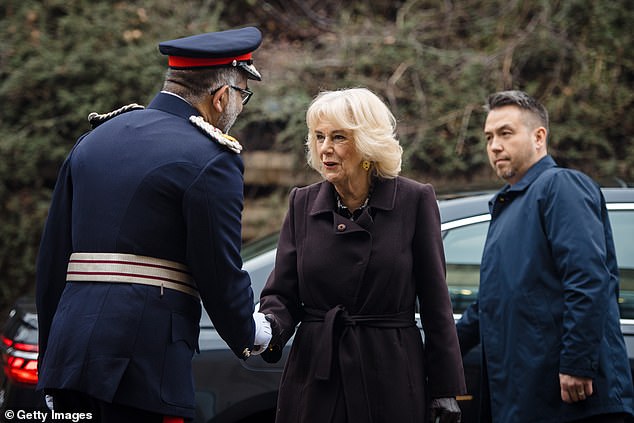 Camilla was greeted by Lord Lieutenant for Somerset, Mohammed Saddiq, during her visit 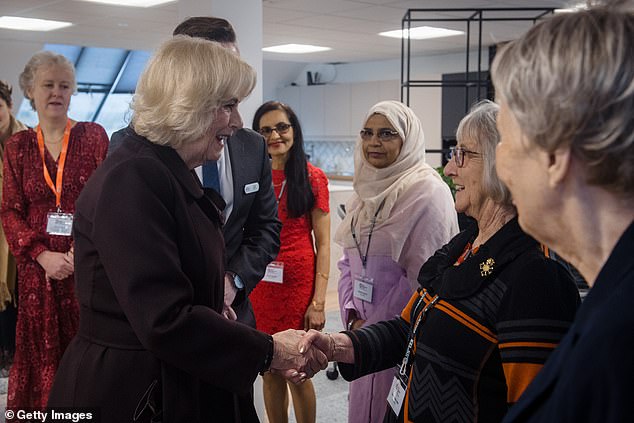 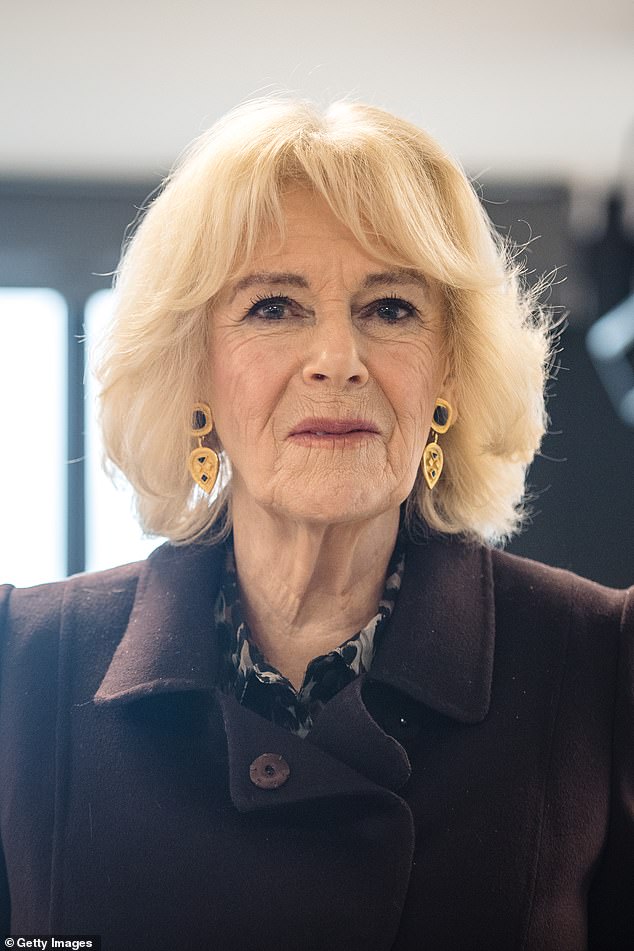 Osteoporosis is a condition that causes bones to fracture or break easily due to loss of strength.

Over 3.5 million people in the UK are estimated to have osteoporosis and half of women over 50 and one in five men will break a bone due to the condition.

In a 2021 interview with Gloria Hunniford for the BBC to mark World Osteoporosis Day, Camilla recalled an awful memory of her mother’s battle.

She said: ‘I remember when a friend of hers came in one day just to give her a hug, her rib broke, it was as bad as that.

‘It was terrible because we didn’t know anything about it, so at some point we thought, ‘Well, is she making a great fuss about all this?

Camilla added that her mother’s condition was so bad that ‘occasionally when she moved or you touched her she literally screamed’. 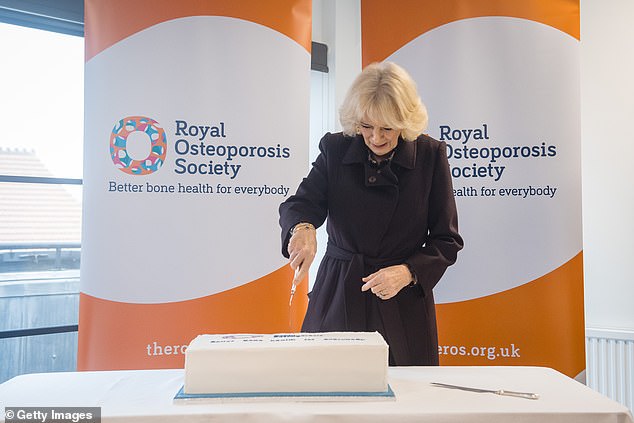 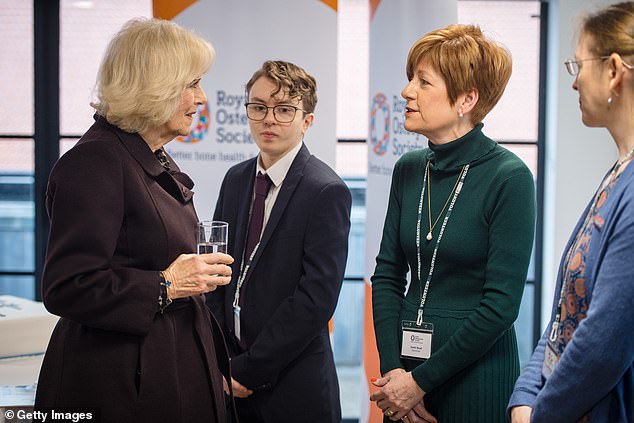 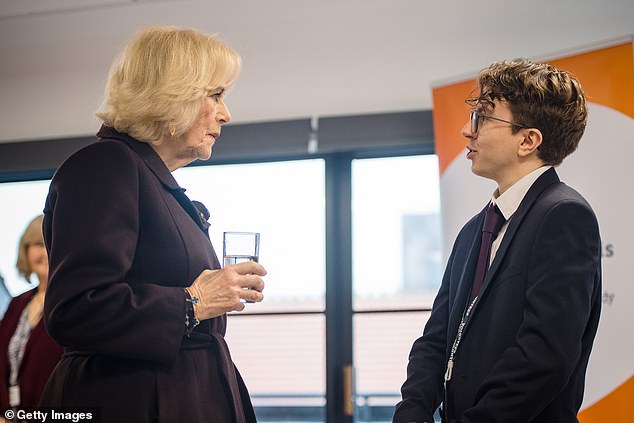 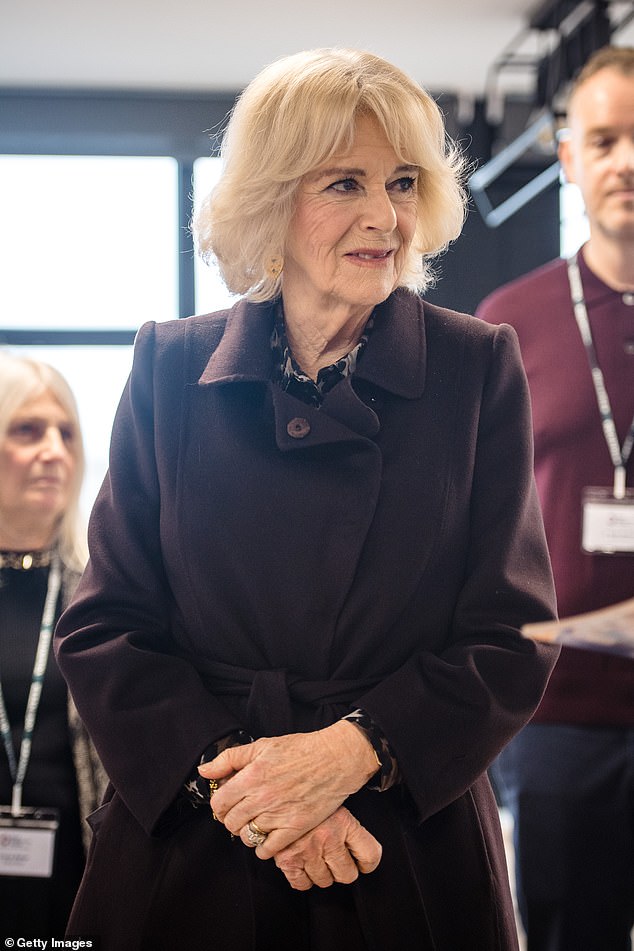 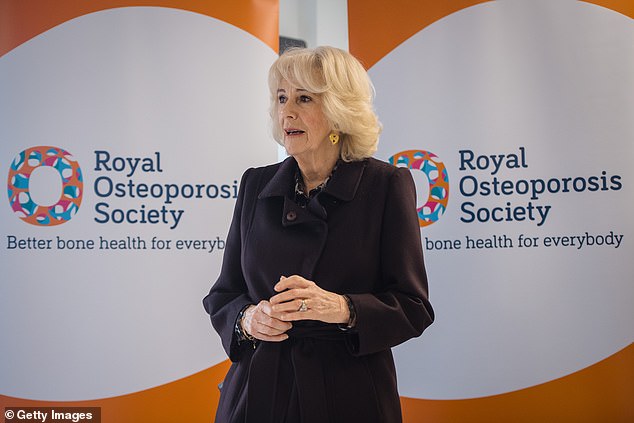 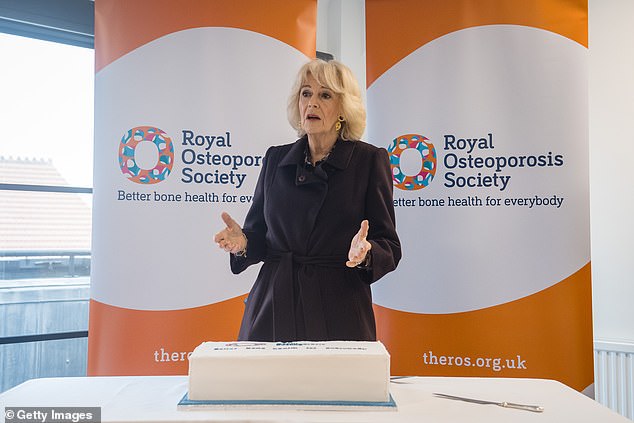 Writing exclusively in the Daily Mail in 2011 Camilla described the horror of watching her mother suffer with the bone disease.

She said: ‘Seeing someone you love die slowly, in agony, and knowing nothing about the disease that killed them is heart-breaking,’ she writes.

‘In those days osteoporosis, a crippling bone disease, was seldom discussed, rarely diagnosed and usually attributed to old women with so-called ‘Dowagers’ humps’. 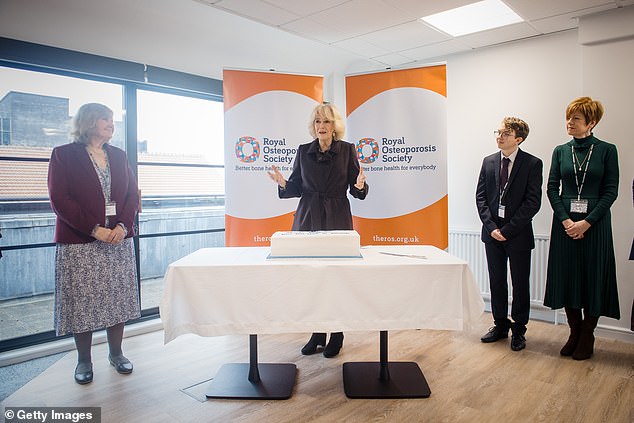 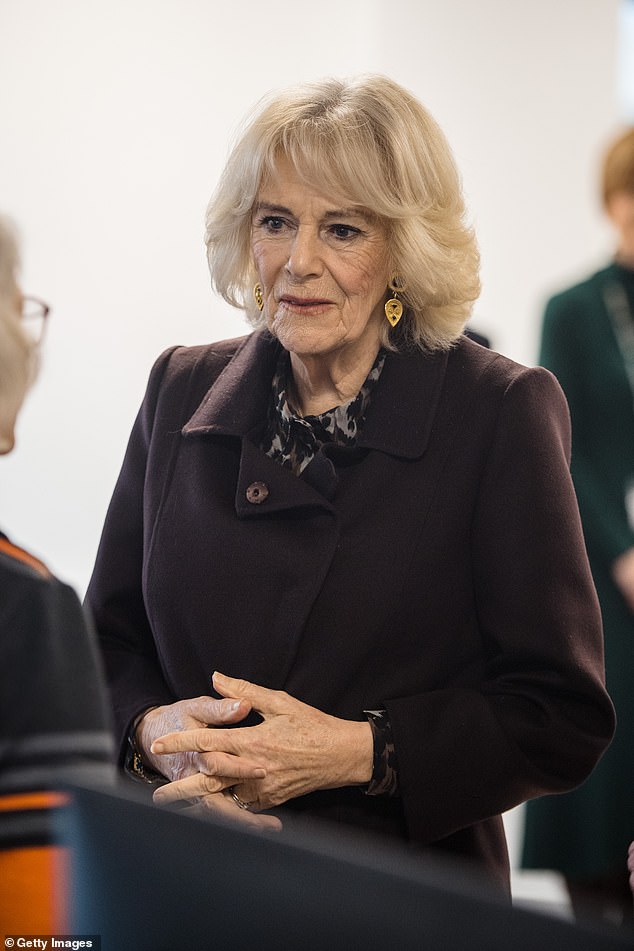 ‘My family and I watched in horror as my mother quite literally shrank in front of our eyes. She lost about eight inches in height and became so bent that she was unable to digest her food properly, leaving her with no appetite at all.

‘The local GP was kind and sympathetic but he, like us, was able to do little to alleviate the terrible pain Mama suffered so stoically.

‘In her later years she could not breathe without oxygen or totter around her beloved garden on her Zimmer frame.

‘I believe that the quality of her life became so dismal, and her suffering so unbearable, that she just gave up the fight and lost the will to live.’ 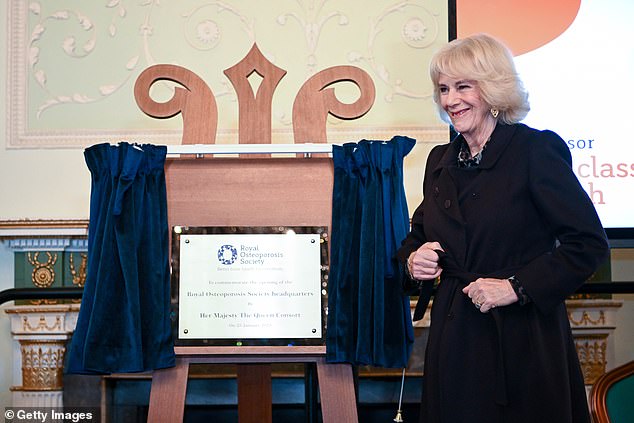 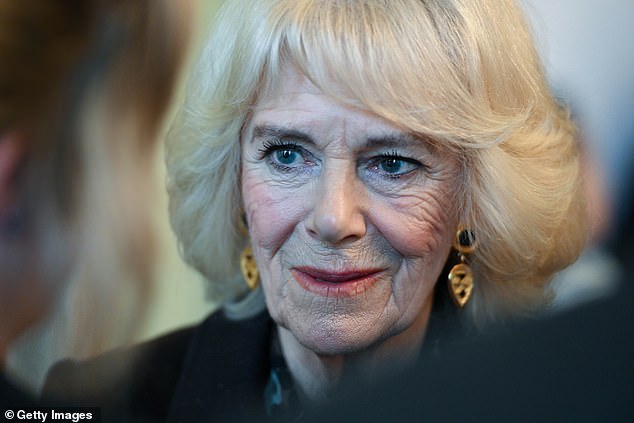 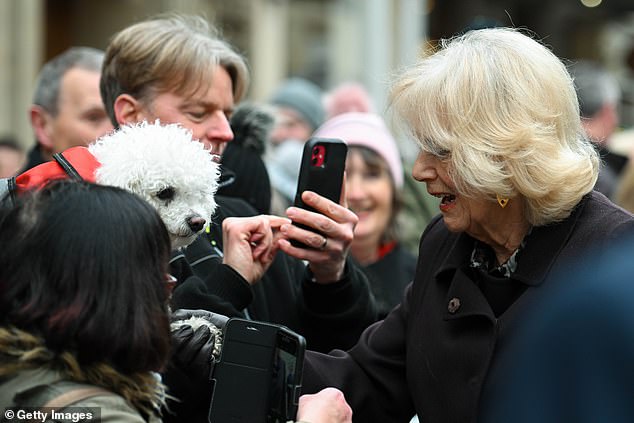 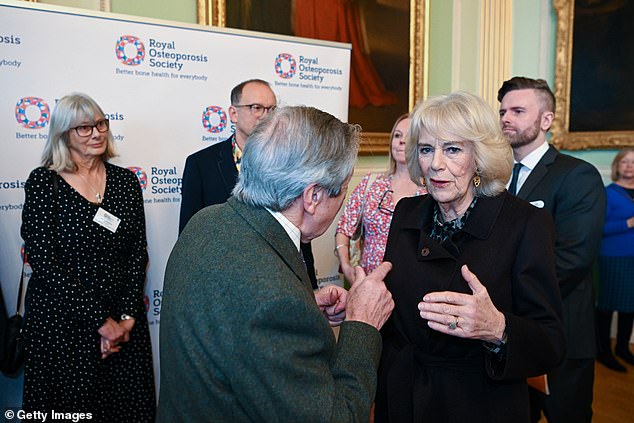 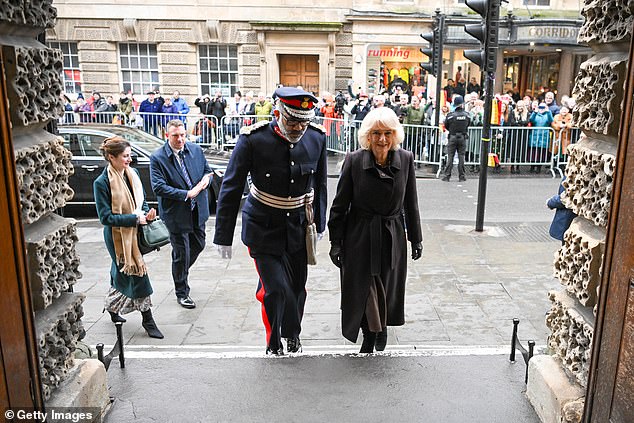 Camilla was escorted inside the Guildhall  by Lord Lieutenant, Mohammed Saddiq, on Wednesday

Later on in the day Camilla joined a reception of 120 invited guests who have been raising awareness of the Royal Osteoporosis Society throughout the region.

The royal enjoyed some digital presentations which highlighted the incredible work and impact that the charity has made over the years.

During the reception, Craig Jones, Royal Osteoporosis Society Chief Executive gave a short speech and invited Her Majesty to unveil a plaque, commemorating the opening of the new offices.

Later Camilla continued on to another engagement where she planted a tree in Lacock as part of the Queen’s Green Canopy.

The initiative launched in October 2021 to mark the late monarch’s Platinum Jubilee with eco-friendly memento.

The royal has strong links with Lacock she owns a home er private home in the Wiltshire village.

In 2006, Camilla’s daughter Laura Lopes also got married at St Cyriac’s Church in the village of Lacock.