To sell seats at his fund-raising dinners in royal palaces, Charles relied heavily on two men who disliked each other intensely.

One was his valet Michael Fawcett and the other was Robert Higdon, the head of his charity foundation in America. And it was the valet who unquestionably had the upper hand.

At fund-raising dinners, he’d stand behind Charles, waiting for a royal click of the fingers to signal that his boss needed something.

He knew precisely how to please him. When the Prince arranged to have a dinner for donors in Hong Kong, for instance, Fawcett shipped over a full set of eighteenth-century china and glasses from England. He also brought a set of special bells used by Charles to summon his staff.

In his guise as a valet, he travelled everywhere with his master. Such was the trust that Charles invested in Fawcett that the valet became his Rasputin, empowered to outflank everyone at court.

For that reason, the Queen had no time for him. Observers at a dinner in Holyrood noticed that she cringed when his name was mentioned. In Charles’s eyes, however, he could do no wrong. If Fawcett took against one of the charity donors, the Prince would echo his judgment.

One casualty was John Studzinski, a sophisticated and generous American-born investment banker. Invited to a lunch at St James’s Palace, he’d given a finely worked speech about raising funds for the homeless. Afterwards, Charles told an organiser, ‘John shouldn’t have made the address, because Michael says that he doesn’t give me enough money.’

The Prince also gave Fawcett a free hand in organising entertainment for the super-rich donors. The valet’s taste, however, tended towards the vulgar.

During one performance, the Irish dancer Michael Flatley was accompanied by a troupe of female dancers who whipped off their robes to reveal skimpy bikinis, with violin music apparently coming from speakers concealed in their bikini bottoms.

Aides noted that Charles didn’t comment on such tawdriness; his valet was too valuable. But then so was Robert Higdon. In 2001 alone, he’d raised $2,622,981 for Charles’s charity foundation — though at $716,000, his combined salary and expenses were unusually high.

‘I became Mr Cash Cow,’ he recalled proudly. Any competitor for Charles’s attention, however, aroused Fawcett’s antagonism, even one who was useful. ‘I was the new enemy,’ said Higdon.

Since he arranged the donations from Americans, he wanted to be the one who supervised their visits when they came over to meet Charles. But Fawcett, he complained, wanted to push him out, and they argued bitterly. 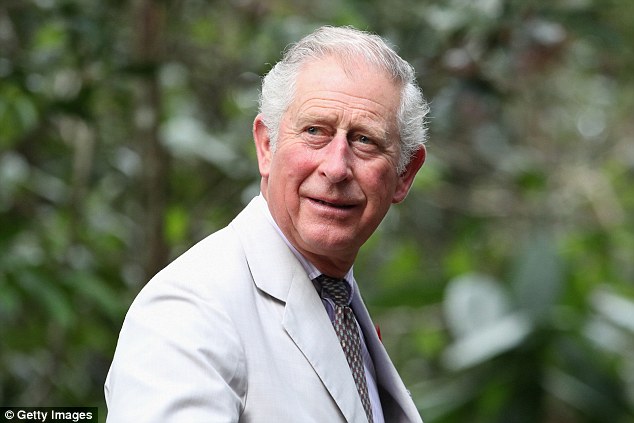 Prince Charles, Prince of Wales during a visit to Semenggoh Wildlife Centre, a rehabilitation centre for orangutans in Malaysia

‘He not only provided bad food and horrible sweet German wine but deducted the cost of the food from my raised money,’ said Higdon. ‘And he organised the dinners like a Barnum & Bailey circus.’

The two men also quarrelled about where guests should sit. Fawcett would ignore Higdon’s plans, and place women of his own choosing next to Charles — either because they were particularly good-looking or because they’d promised significant cash.

Minutes before the American guests arrived, there would often be farcical scenes. Each man would grab at name cards on the Prince’s table to move them either nearer to his seat or further away. In the case of Eva Rausing, the American wife of the Swedish billionaire Hans Rausing, their argument became particularly unseemly.

Higdon had originally persuaded Rausing to support Charles’s charities. At one American dinner, however, he’d discovered that Fawcett had placed her next to Charles, apparently in exchange for a donation of £500,000, thus outdoing the American woman whom Higdon had promised could sit next to the Prince for $250,000.

‘He’s one of the most horrible people I’ve met in my life,’ Higdon complained of Fawcett.

As for Higdon himself, Charles found it hard to warm to him. ‘But the Boss and the Blonde kept me because they knew the money I was bringing in,’ said the American, who worked for the Prince for 14 years.

H e developed a great affection for the blonde — Camilla. She ‘has more self-confidence than anyone I know. Unlike Charles, who is doubtful and whiney, she’s so tough. She never questions anything,’ he said.

‘Charles and I had a dysfunctional relationship. He would phone on Thanksgiving and Sundays, which was disturbing. We did laugh a lot. But Charles never said thank you.’

In the late Nineties, after Higdon fell blind-drunk from a boat in St Vincent in the Caribbean, it became clear that he was an alcoholic. Charles, however, was reluctant to fire such an outstanding source of income, and Higdon resumed his job after treatment.

He was finally fired in 2011. Shortly before, according to Higdon, he’d been taken aside by Charles’s accountant Leslie Ferrar.

‘You know, Robert,’ she told him, ‘people are very uncomfortable about you and your relationship with Prince Charles.’

She went on to say that Higdon’s familiarity with the Prince had crossed the line; he acted like a friend, while in reality he was a servant.

‘You’re out of your mind,’ exploded Higdon, who remains bitter about Charles’s lack of gratitude for all the millions he raised.

As for the Prince’s staff, he called them ‘mean, vicious . . . the most horrible people I’ve ever worked with.’