All senior members of the Royal Family will now wear mourning dress at the Duke of Edinburgh’s funeral on Saturday.

The Daily Mail understands that, in an unprecedented about-turn, a last minute decision, approved by the Queen, has been made that no royals will wear military uniform in order to present a united family front.

Behind the scenes, courtiers have been racked by concern that Prince Harry, who was forced to give up his honorary military titles after he acrimoniously quit royal duties and moved to the US, would be the only senior royal not in uniform.

Harry, 36, is understood to have wanted to wear the Blues and Royals dress uniform he wore on his wedding day in May 2018.

As a former captain with the Household Cavalry, however, he is entitled only to wear a suit, with any medals he has been awarded in the course of his duties or by the Queen.

By contrast the Prince of Wales, Duke of Cambridge, Earl of Wessex and Princess Royal would have been, by convention for a royal ceremonial funeral, in full military uniform.

Harry, 36, is understood to have wanted to wear the Blues and Royals dress uniform he wore on his wedding day in May 2018

The Prince of Wales, Duke of Cambridge, Earl of Wessex and Princess Royal would have been, by convention for a royal ceremonial funeral, in full military uniform 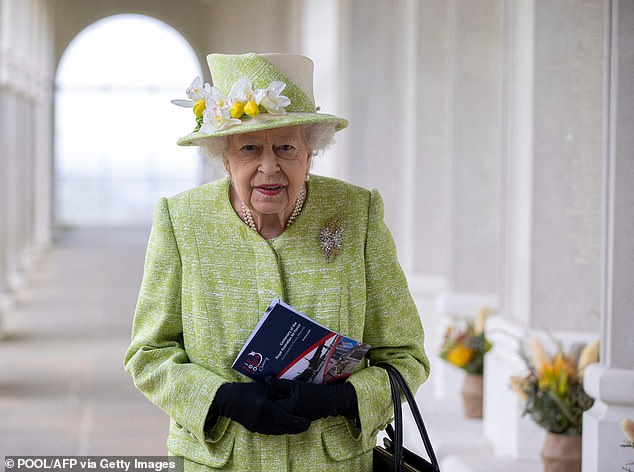 The Daily Mail understands that, in an unprecedented about-turn, a last minute decision, approved by the Queen (pictured), has been made that no royals will wear military uniform in order to present a united family front

The issue was compounded when Prince Andrew demanded to wear the uniform of admiral, a position he had offered to defer taking up after stepping back from public duties in the wake of the Epstein scandal.

Crucially Andrew has not been stripped of his honorary military titles and remains a vice-admiral in the Royal Navy.

It led to concerns within the Royal Household that if Andrew were denied his request to go in uniform, he and Harry would be the only ones in civilian dress who had seen active service in the military.

Royal Family members with a military rank have worn uniforms at state occasions since the 19th century.

At the Queen Mother’s funeral in 2002, the last funeral of a royal consort, Prince Philip, Prince Charles, Prince Andrew and Princess Anne all wore uniforms.

Prince Edward, who quit the Royal Marines after four months’ service, wore a black morning coat, as did his nephews William and Harry, who had yet to serve in the Armed Forces. Anne had not served in the military but held the honorary rank of Rear Admiral.

By contrast, at the funeral of Princess Diana royals wore dark suits and not military dress. The funeral was considered a ceremonial event rather than a full state occasion.

In 1952, at the funeral of the Queen’s father King George VI, his brothers the Duke of Windsor and the Duke of Gloucester wore military dress alongside Prince Philip. The Queen and Queen Mother wore mourning clothes, including heavy black veils.

Illustrations from Queen Victoria’s 1901 funeral show her sons Edward VII and the Duke of Connaught in military dress on horseback in her funeral procession.

A source said: ‘There was the risk of real embarrassment.’

The Queen has decided that, to retain family unity and spare Harry any public humiliation, everyone will dress the same – morning coats and black ties for the men, simple black outfits for the women.

It is believed to be only the second time in more than a century that members of the Royal Family have not worn uniform to the funeral of a monarch or their spouse.

It will, however, be seen as a significant public olive branch to Harry in the wake of his and Meghan’s devastating interview with Oprah Winfrey last month, in which they criticised members of his immediate family and accused the institution of racism.

Buckingham Palace last night declined to comment, but the Mail understands the decision will be officially announced today.

It is believed that there is a genuine desire to try to start to repair stricken family relationships, particularly the rift between Harry and his older brother William, and the funeral of their beloved grandfather may be a good place to start.

Discussions on the issue went to the wire, with senior aides including the Master of the Household, Vice-Admiral Tony Johnstone-Burt, trying to negotiate a solution.

The final decision rested with the widowed Queen.

A source close to Andrew said yesterday that he would ‘do what is appropriate’ and had no intention to distract from his father’s funeral.

He served 21 years in the Navy and is promoted in line with his peers who are still serving.

But he requested to forgo the promotion until he is able to clear his name and fully resume royal duties.

However it is understood that he still asked to go to his father’s funeral as an admiral. Saturday’s event is known as a royal ceremonial funeral – based on one held 19 years ago for the Queen Mother, wife of George VI – at Philip’s specific request.

It is not as large or as grand as a state funeral, but many of the ceremonial elements are the same.

All senior royals entitled to wear uniform, including the Duke of Edinburgh, did so in April 2002. 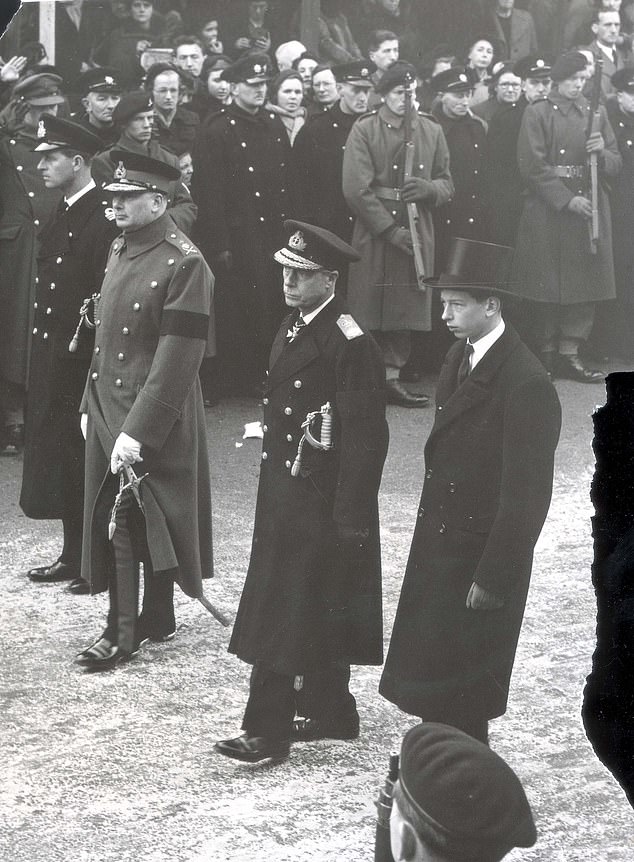 This was in contrast to the private funeral of the Queen’s sister, Princess Margaret, weeks earlier, where mourning dress was worn, as well as five years earlier at the funeral of Diana, Princess of Wales, by then a former royal.

Initially the plan was for senior royals to wear military uniform on Saturday in line with convention.

But it quickly became clear this was a thorny issue given how vocal Harry, currently quarantining at Frogmore Cottage at Windsor after flying back from the US, has been over the loss of his military titles.

Sources close to Harry have revealed the depth of his anger, particularly given he had served ten years in the military with two frontline tours of Afghanistan.

Last month he told Miss Winfrey that losing his official positions ‘hurt’ but added that he ultimately respected his grandmother’s decision.

However, he pointedly attended – with Meghan – a military cemetery in Los Angeles wearing his lounge suit and medals, after the Queen denied his request to have a wreath laid at the Cenotaph on his behalf on Remembrance Sunday as he is no longer a working royal.

RICHARD KAY: How has it come to this? And what on earth would Philip think…?

On Saturday, when the nation comes to a halt for the funeral of one of its last bona fide Second World War heroes, not one of Prince Philip’s family will be clad in military uniform.

Instead his sons, daughter, grandsons and cousins – who by virtue of appointment or distinguished service have a right to regimental or naval dress – will be in mourning clothes: Tailcoats for the men and dresses of black crepe for the women.

Not a flash of ceremonial gold stripe nor a navy blue sash will be on view, no decorated peak caps to be raised and lowered as protocol demands and no snappy salutes given.

So how on earth has it come to this?

A delicate compromise was how it was being seen in Palace circles last night, an attempt to head off the possibility of yet another internal family row.

But to many it will look less like a concession and more like a capitulation. In an instant, centuries of tradition have been overturned.

The reason? A question of uniforms for two royal dukes.

The two dukes, of course, are Prince Andrew and Prince Harry, both semi-detached from royal life yet both with a compelling hold on a military heritage.

As the Daily Mail reported yesterday, Andrew – who has stood down from official duties over his friendship with convicted paedophile Jeffrey Epstein – had made clear that he wished to wear the uniform of an admiral, the rank he was awarded by the Queen on his 60th birthday and which at the time he offered to defer.

But while this has provoked unease in and around the office of the Lord Chamberlain, which is overseeing the formality of the funeral, the major focus is on the position of the Duke of Sussex. Harry’s decision to give up royal life and move to California with his wife Meghan and their son Archie meant he had to surrender his treasured honorary military titles.

This had thus opened up the very real possibility that Philip’s grandson would have been the only senior male royal not in uniform at the funeral of the warrior prince.

It is hard to escape the irony of this. Of all those in Philip’s immediate family, only two had – like him – seen active service, his son Andrew and his grandson Harry. In the Falklands conflict of 1982 Andrew was a daring helicopter pilot flying dangerous decoy missions to lure deadly Argentine Excocet missiles away from British warships. No one questioned his courage then and he left the Royal Navy after 22 years of impeccable service.

Harry displayed bravery on not one but two tours of Afghanistan, once as an infantry troop leader on the ground and second time round flying sorties at the controls of an Apache helicopter. He, too, was selfless in his service.

Harry and Andrew – both second sons, remember, who spent much of their lives as heirs to their elder brothers – have been troubled by what they see as their exclusion from military matters. How this has hurt; both hardened by combat but crushed by disappointment. Andrew has long kept up links with other veterans and survivors of the South Atlantic conflict, while Harry turned his support for wounded servicemen into the Invictus Games.

No wonder this has provoked a crisis at the Palace. Imagine the scene as the royals follow the family patriarch’s coffin down the hill from Windsor Castle to its place of rest at St George’s Chapel on Saturday afternoon.

There is Harry, and possibly Andrew, in civilian clothes alongside Prince Edward, who abandoned the Royal Marines just weeks into its gruelling commando course, but who holds a handful of honorary military titles permitting him to don uniform, and Princess Anne, who also has a fistful of Army and Navy appointments but no service experience.

It is difficult to imagine Philip, who said he never left the Navy but was merely on permanent leave, doing anything but harrumphing at this extraordinary state of affairs.

Here was a man, the youngest officer promoted to first lieutenant during the war, mentioned in despatches during the Battle of Cape Matapan and a witness to the Japanese surrender in Tokyo Bay, now being denied the kind of send-off, with its blaze of ceremonial colour, he had so often presided over.

When the Queen Mother was laid to rest in 2002, it was Philip leading the funeral procession in his ceremonial Royal Navy uniform. And it was the same in 1979, at the obsequies for Earl Mountbatten of Burma, the uncle he lost at the hands of the murderous IRA. He was in military uniform, too, for the funeral of Britain’s wartime prime minister Sir Winston Churchill in 1965.

And he surely would have expected nothing less at his own farewell: That those entitled to wear uniform should do so. He might have helpfully argued that if Harry and Andrew could not wear the dress of the senior and honorary positions they held, why not the uniform of the ranks they left the service with?

In Andrew’s case in 2001 it was as a commander. Harry reached the rank of captain, which was automatically promoted to major on his retirement.

But Philip, too, was the great pragmatist of the Royal Family. Might he not also have thought how much better if his funeral were a vessel for agreement rather than one of dissent?