As the nation eagerly awaiting news of the royal birth this morning, the Queen occupied herself by going horse riding at Windsor Castle as her grandson’s wife gave birth.

Her Majesty was spotted taking a turn around the grounds on her beloved black Fell pony, Carltonlima Emma while she awaited news from the Lindo Wing.

The monarch, 92, was joined by Head Groom Terry Pendry, who is a frequent companion on her hacks.

The Queen donned one of her customary headscarves for the excursion, and kept the chill at bay in a beige mac.

This afternoon it was announced that the Duchess had given birth to her third child – a boy weighing 8lbs 7oz at 11am and that mother and baby were doing well.

Senior members of the royal family were said to be ‘delighted with the news’.

The baby is fifth in line to the throne, the Queen and the Duke of Edinburgh’s sixth great-grandchild and a younger brother for Prince George and Princess Charlotte.

The Queen, 92, was spotted horse riding at Windsor this morning as she awaiting news of the latest royal baby’s birth 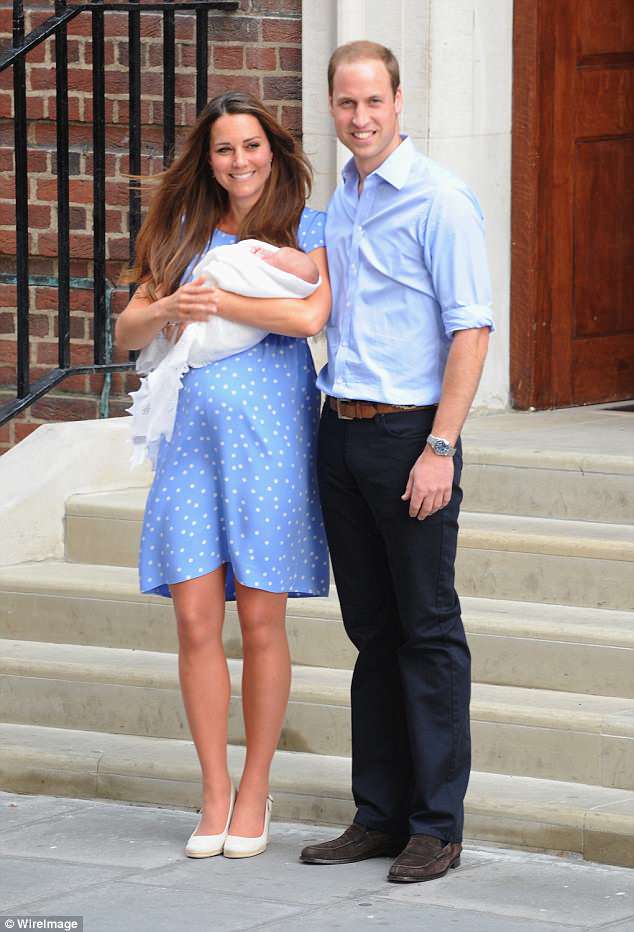 Kate and William, pictured after the birth of Prince George, this morning welcomed their second son who was born weighing 8lbs 7oz

Kensington Palace announced that Kate was taken by car before 6am to the private Lindo wing of St Mary’s Hospital in Paddington,London.

The birth appears to have taken place without complications. The baby is fifth in line to the throne, the Queen and the Duke of Edinburgh’s sixth great-grandchild and a younger brother for Prince George and Princess Charlotte.

Prince William was present for the birth, and both Kate and the child were ‘doing well’, according to a palace spokesman.

Royal watchers had been expecting a swift delivery at the Lindo Wing, with the child sharing a birthday with William Shakespeare and Lady Gabriella Windsor, the daughter of Prince and Princess Michael of Kent. 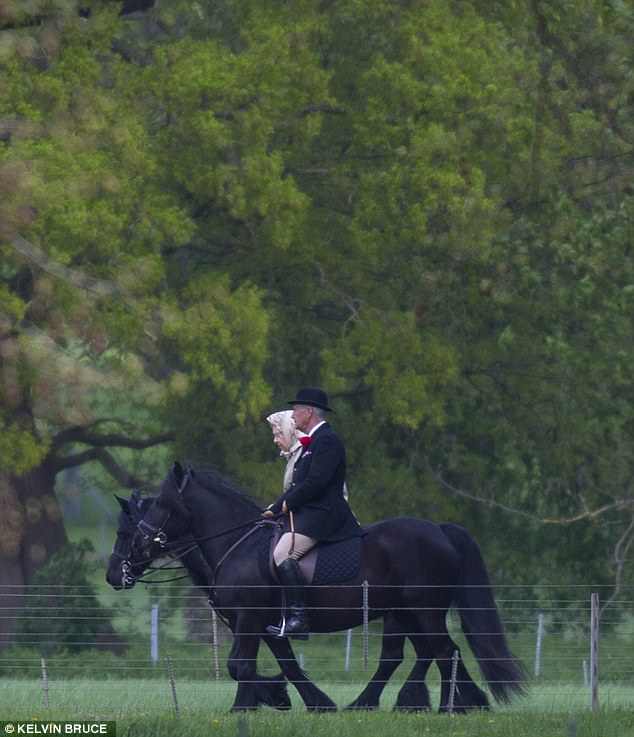 The monarch was joined by Head Groom Terry Pendry, who is a frequent companion on her hacks. 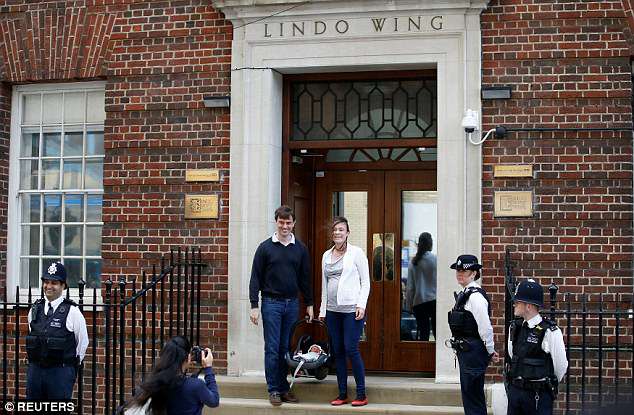 An unsuspecting couple emerged from the Lindo Wing with their newborn baby to be greeted by the world’s media. They posed for photographs outside the famous door in front of dozens of journalists and photographers before leaving in a taxi 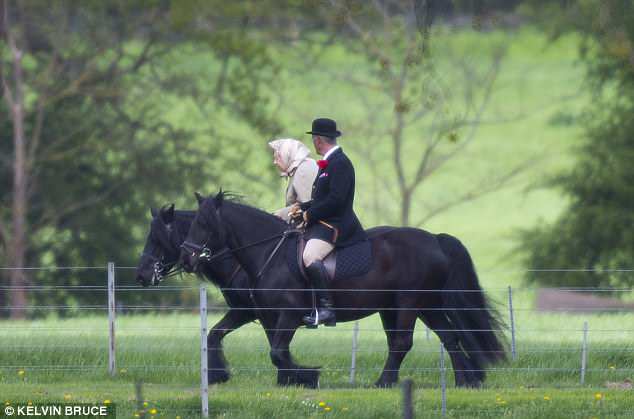 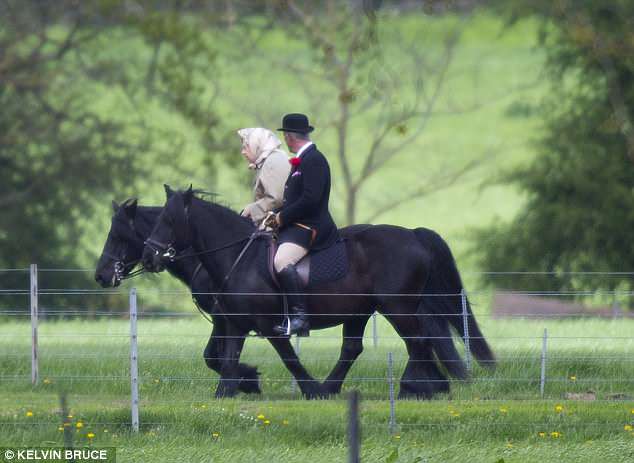 ‘Her Royal Highness and her child are both doing well. The Queen, The Duke of Edinburgh, The Prince of Wales, The Duchess of Cornwall, Prince Harry and members of both families have been informed and are delighted with the news.’

The baby’s sex was a surprise to William and Kate, who chose not to find out what they were having. The baby’s title is His Royal Highness and he is a Prince of Cambridge.

Kensington Palace said the name of the baby would be announced in due course, and a formal notice of the birth would be posted on the forecourt of Buckingham Palace.

Charlotte, at 8lb 3oz, weighed slightly less than George’s 8lb 6oz – but was still above average. The average weight of a baby in the UK is around 7lb 7oz (3.5 kg).

All of three of the Duchess of Cambridge’s children have weighed more than 8lbs. But the new prince is not the heaviest royal baby in recent years.

That title falls to Savannah Phillips – the daughter of the Queen’s grandson Peter Phillips – who weighed 8lb 8oz in 2010.

Celebrities and politicians have been sending their best wishes to The Duke and Duchess of Cambridge on social media.

Prime Minister Theresa May sent her ‘warmest congratulations to the Duke and Duchess of Cambridge on the birth of their baby boy.’ ‘I wish them great happiness for the future,’ she added.

Mayor of London Sadiq Khan tweeted: ‘On behalf of Londoners, I want to send our warmest congratulations to the Duke & Duchess of Cambridge on the birth of their baby boy.’

Earlier, excitement was building outside St Mary’s Hospital, where some fans had been camped out for 15 days hoping for a glimpse of the royal baby.

The timing of today’s announcement that Kate had gone into labour, falling on St George’s Day, added to the occasion for waiting royalists outside.

John Loughrey, 63, who is part of a group who have been camped outside the hospital, said: ‘We are so pleased. We have been here for 15 days.

‘I’m so pleased it’s St George’s Day. St George himself would be very pleased if the baby’s born today.’

Mr Loughrey, from Streatham, South London, said he plans to celebrate the birth with English flags and a portion of fish and chips.

‘It doesn’t matter if it’s a boy or a girl as long as it’s a healthy baby and a healthy mother,’ he said. ‘It’s very good for our country and of course Her Majesty the Queen.’

Another member of his group, 82-year-old Terry Hutt, also welcomed the news.

‘It’s fantastic to have another newborn baby,’ said Mr Hutt, who turns 83 at the end of the month and was hoping to share his birthday with the new royal.

‘If they were born on my birthday, I would have got a birthday cake.’ 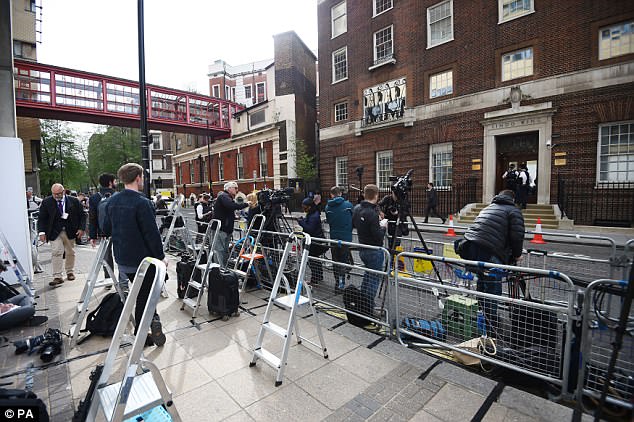 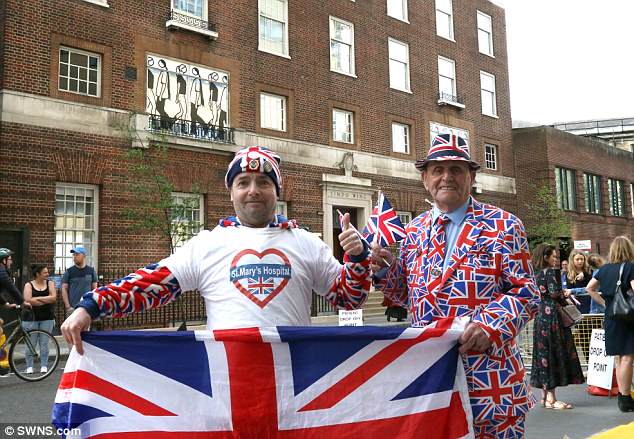 The group were talking in front of their make-shift camp, including royal memorabilia and a Union Flag tent.

Highly-trained midwives were also on hand, while experts were waiting in the wings in case of an emergency. 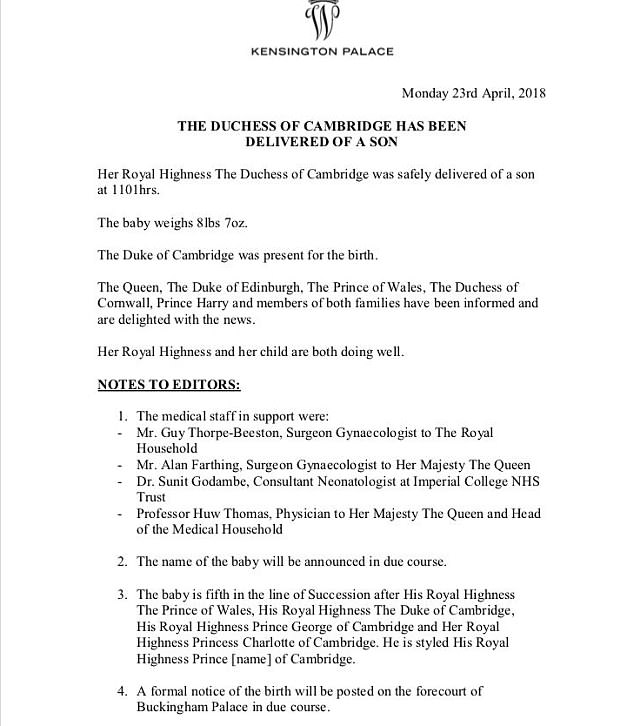 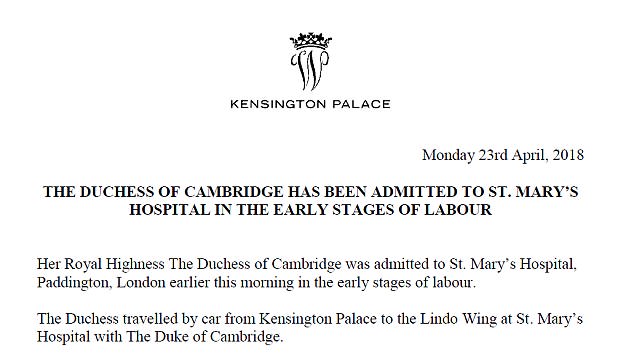 The new Prince of Cambridge has become the fifth in line to the throne, pushing Prince Andrew out of the top six for the first time.

The Duke and Duchess of Cambridge’s third child – a younger sibling to Prince George and Princess Charlotte – is the Queen and the Duke of Edinburgh’s sixth great-grandchild. 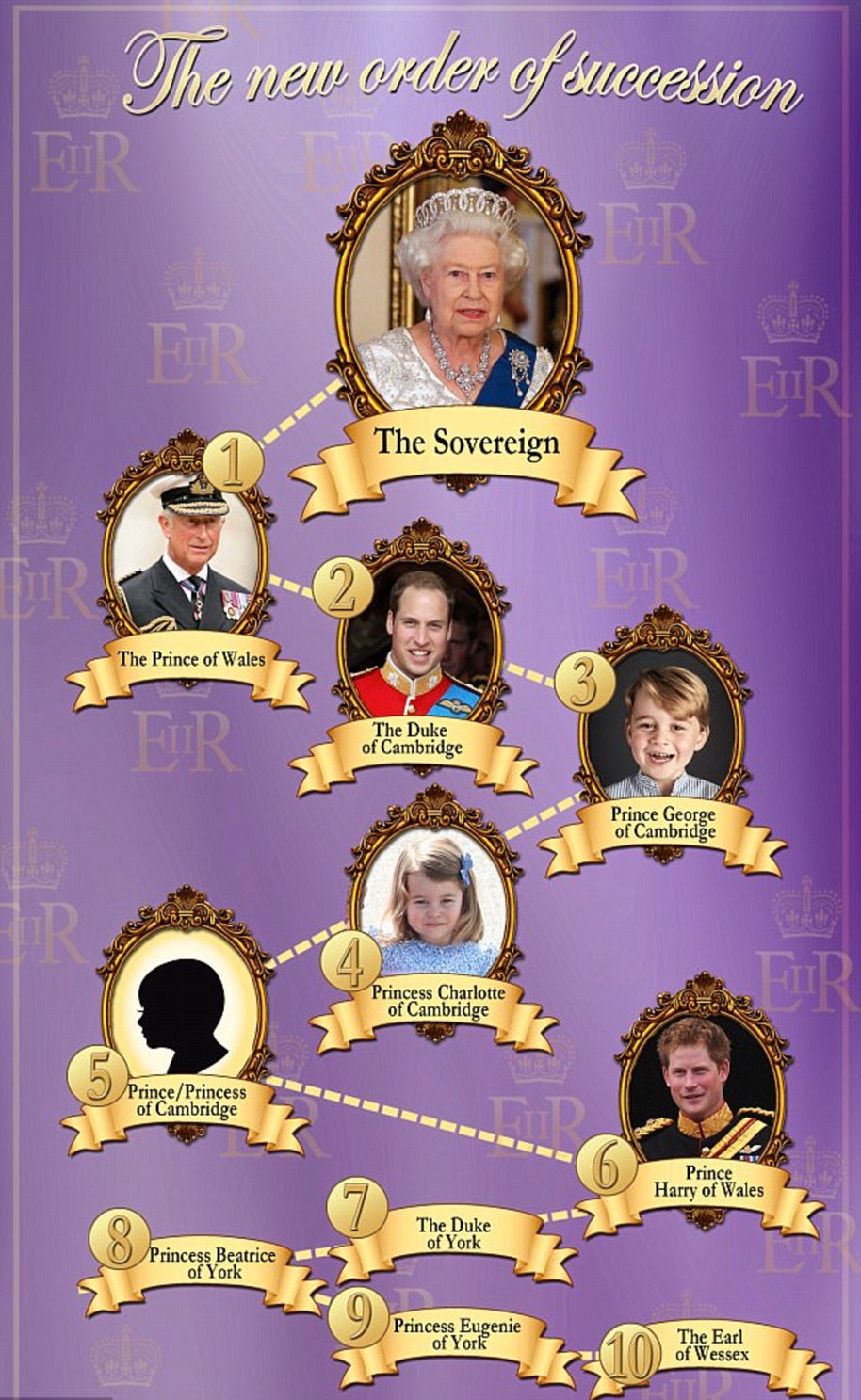 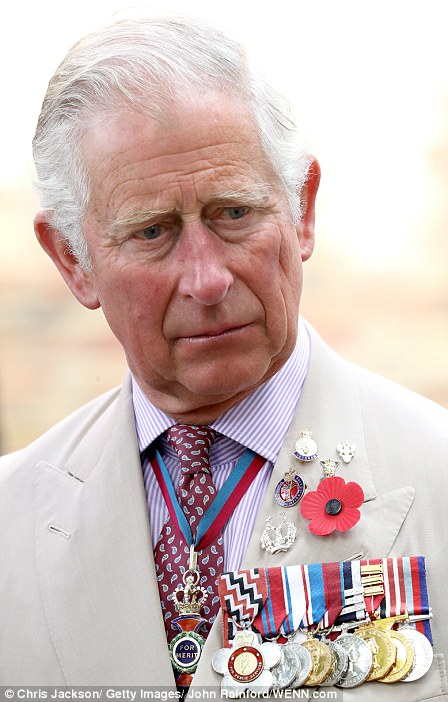 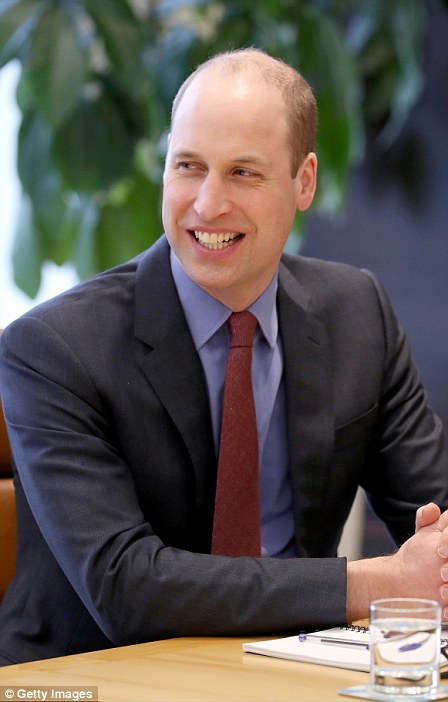 Prince Charles is currently heir to the throne, and will take over from the Queen when she dies, or if she abdicates. Prince William is currently second in line, and will become King following the death or abdication of his father 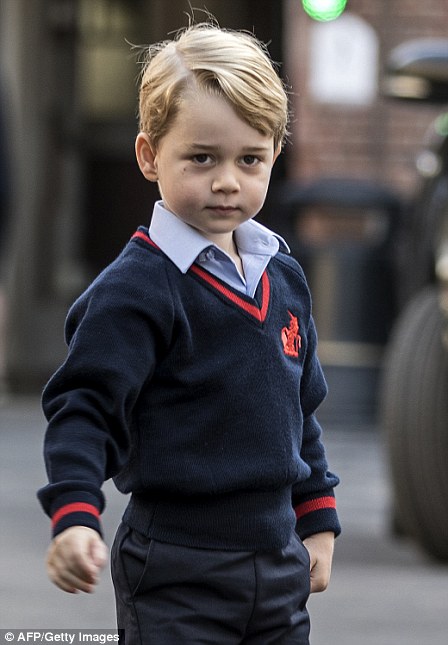 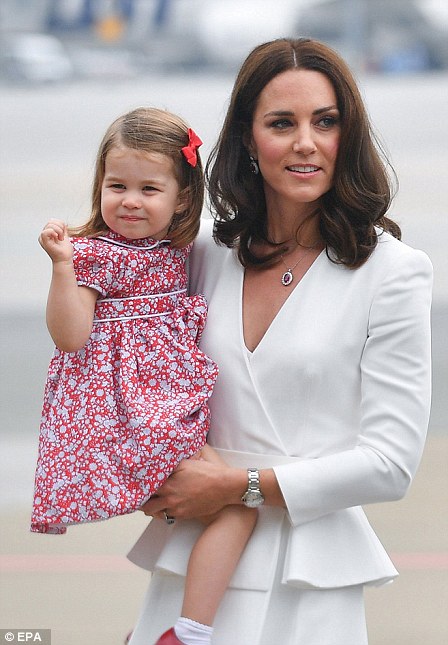 Prince George will stay as third in line to the throne and will succeed his father. Princess Charlotte will remain as fourth in line in the throne, thanks to the law change in 2013 that means that male siblings no longer overtake their sisters

As a sibling to both future king George and ‘spare to the heir’ Charlotte, the new baby is unlikely ever to be crowned sovereign.

The Duke of York is the Queen and the Duke of Edinburgh’s third child, but when Andrew was born in 1960 he leapfrogged his older sister, Princess Anne, in the line of succession.

With the Cambridges’ third child being a boy, he will no longer be allowed to jump ahead of older sister Charlotte in the line of succession. 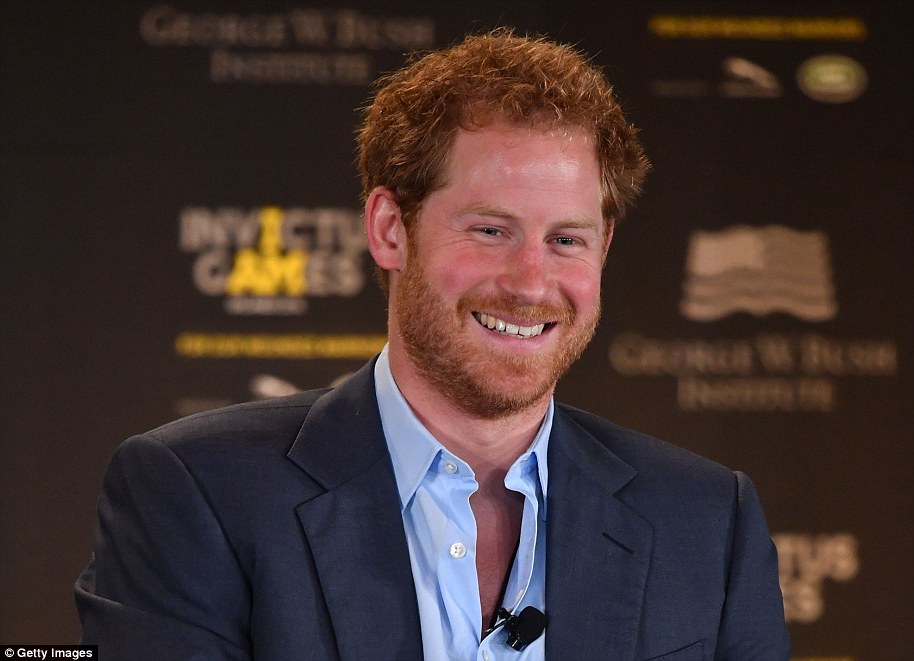 But a radical shake-up of the royal succession rules removed discriminatory male bias and came into force in March 2015, affecting babies born after October 28 2011.

The Succession to the Crown Act 2013 has already affected the Duke of Gloucester’s granddaughters, Senna Lewis and Lyla Gilman, whose younger brothers, born in 2012, now follow them in the line of succession.

The new baby is a prince thanks to the Queen, who stepped in ahead of Prince George’s birth to ensure all William’s children would become HRHs with fitting titles.

The Queen issued a Letters Patent under the Great Seal of the Realm in December 2012 when Kate was just a few months pregnant, declaring ‘all the children of the eldest son of the Prince of Wales should have and enjoy the style, title and attribute of Royal Highness with the titular dignity of Prince or Princess prefixed to their Christian names or with such other titles of honour’.