The Queen has joined US Vogue editor Anna Wintour on the coveted FROW – front row – at London Fashion Week this afternoon, for the first time in her record-breaking reign.

The 91-year-old monarch sat next to the fashion doyenne for her inaugural visit to the event – details of which were shrouded in secrecy until her arrival – to watch a runway show and present the new Queen Elizabeth II Award for British Design.

However, eyebrows were raised when Wintour, 68, refused to remove her iconic shades as she sat next to the monarch – a breach of etiquette that expert William Hanson has blasted as ‘plain rude’.

He said: ‘The Queen of Fashion meets The Queen, but sadly has got it wrong here. Whilst Anna Wintour’s fashion choices usually are faultless her etiquette today is far from on trend.

Queens of style! The monarch sits next to (l-R) BFC chief Caroline Rush, US Vogue editor Anna Wintour and royal dressmaker Angela Kelly for her front row debut this afternoon

‘Sunglasses are outdoor accessories and should always be removed when indoors – even if they are your trademark. For a start, you don’t need them indoors, and secondly it’s just plain rude to shield the eyes – an exception to Ms Wintour’s trademark shades should have been made when in the presence of Her Majesty.

‘That said, Ms Wintour managed to comply with good manners last night at a reception at Buckingham Palace with Their Royal Highnesses The Duchess of Cambridge and Countess of Wessex by removing her sunglasses but lapsed today at Richard Quinn.

‘The Queen won’t have commented to Ms Wintour or any of Her Majesty’s staff but I am sure, internally, she thought the behaviour somewhat odd.’

Following the Queen’s arrival on Tuesday afternoon, she viewed a millinery exhibition curated by the legendary Stephen Jones and admired a jewellery display.

Among the designers is newcomer Harvy Santos who designed this leather and stud crown based on Queen Victoria’s travelling crown. 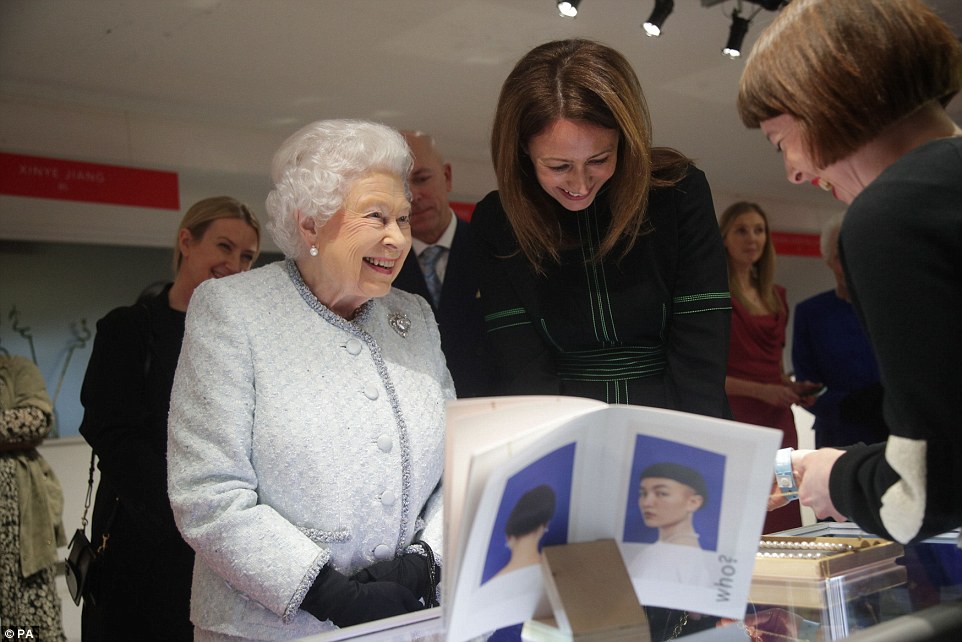 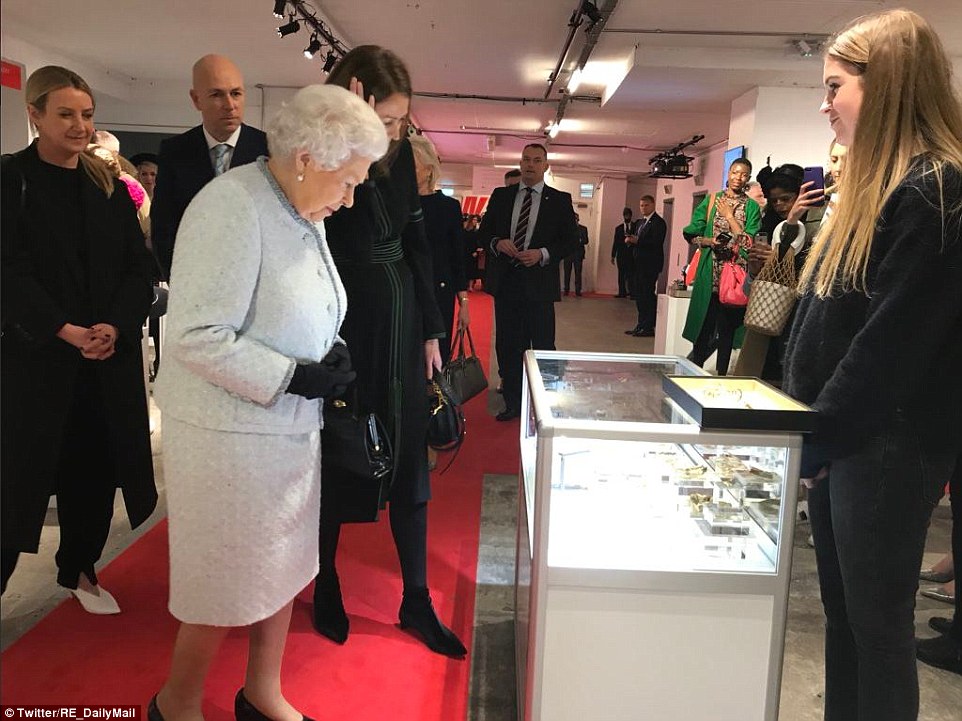 Queen of style! The royal is making her inaugural visit to London Fashion Week – details of which were shrouded in secrecy until her arrival – to present the new Queen Elizabeth II Award for British Design (seen here admiring a jewellery display) 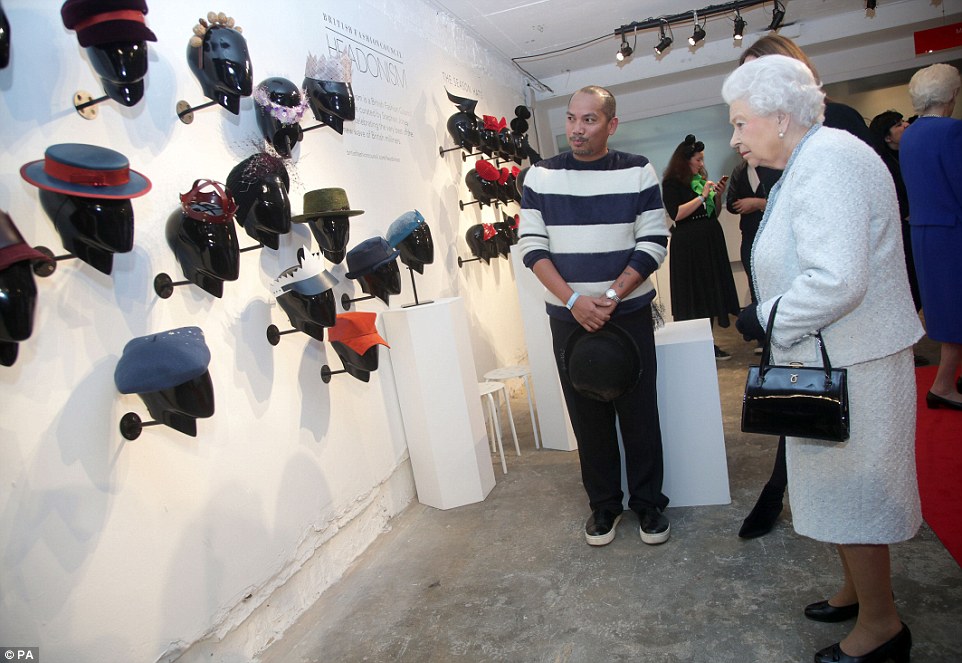 A world away from Angela Kelly! The monarch views a display of avant garde hats during her visit to the BFC 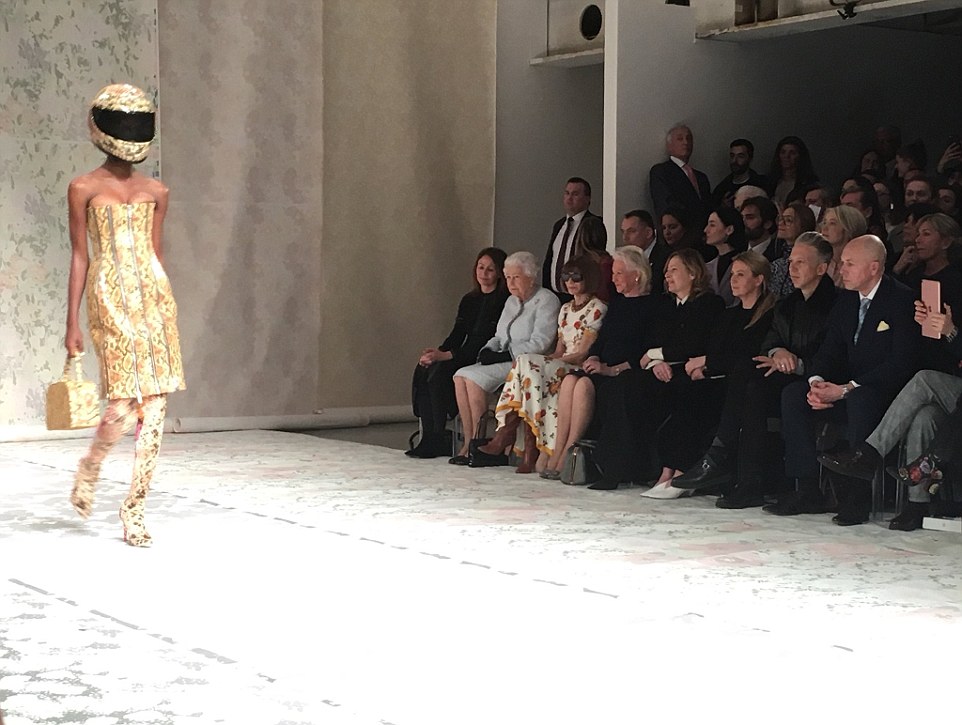 The Award, initiated in recognition of the role the fashion industry plays in society and diplomacy, will be awarded annually to an emerging British fashion designer who shows exceptional talent and originality, whilst demonstrating value to the community and/or strong sustainable policies.

Quinn is an emerging talent within the United Kingdom who has been recognised for his exceptional prints.

Already supplying leading stores around the world, he has also set up a print studio which offers high quality, accessible services to students and his emerging designers. 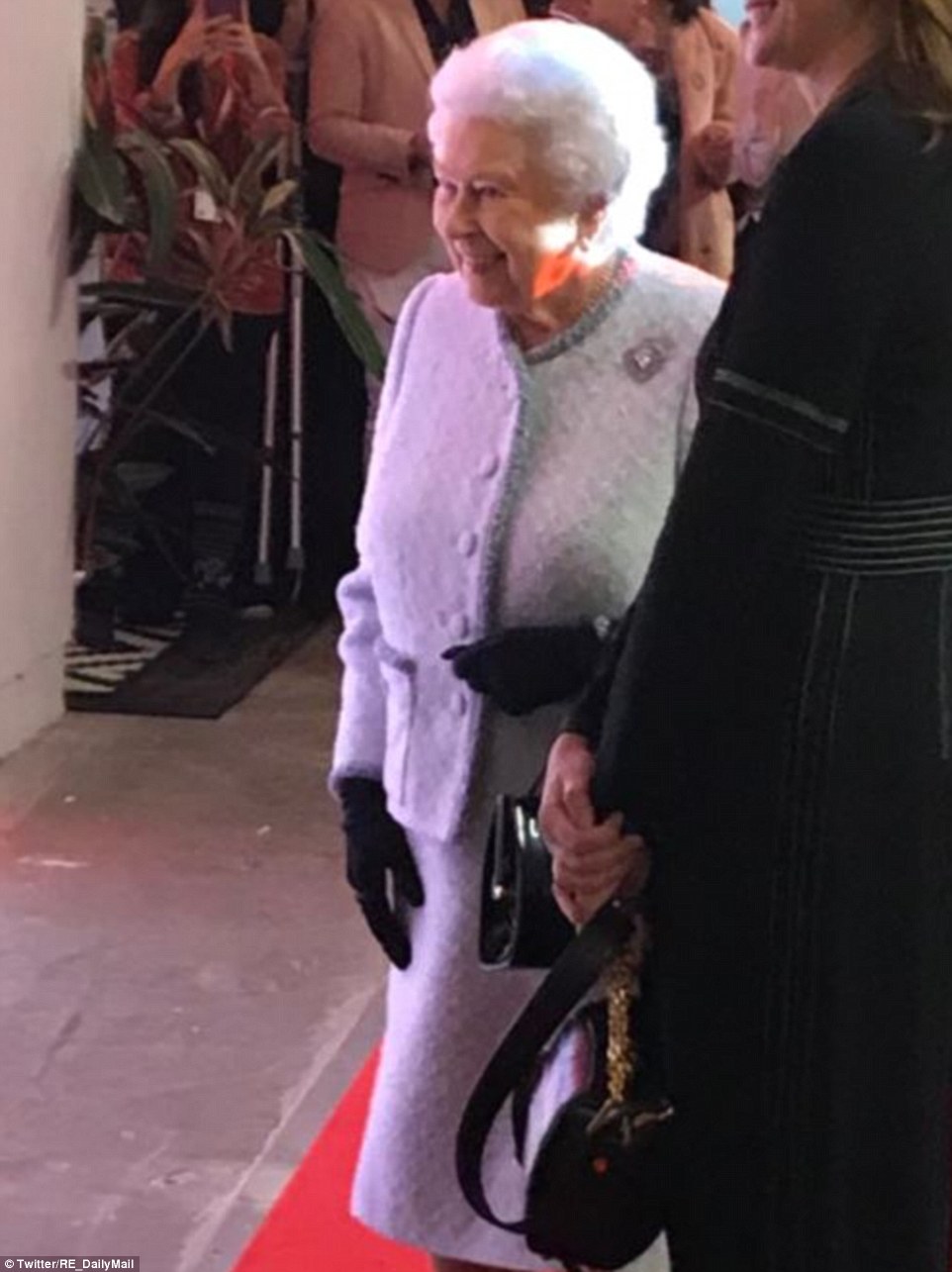 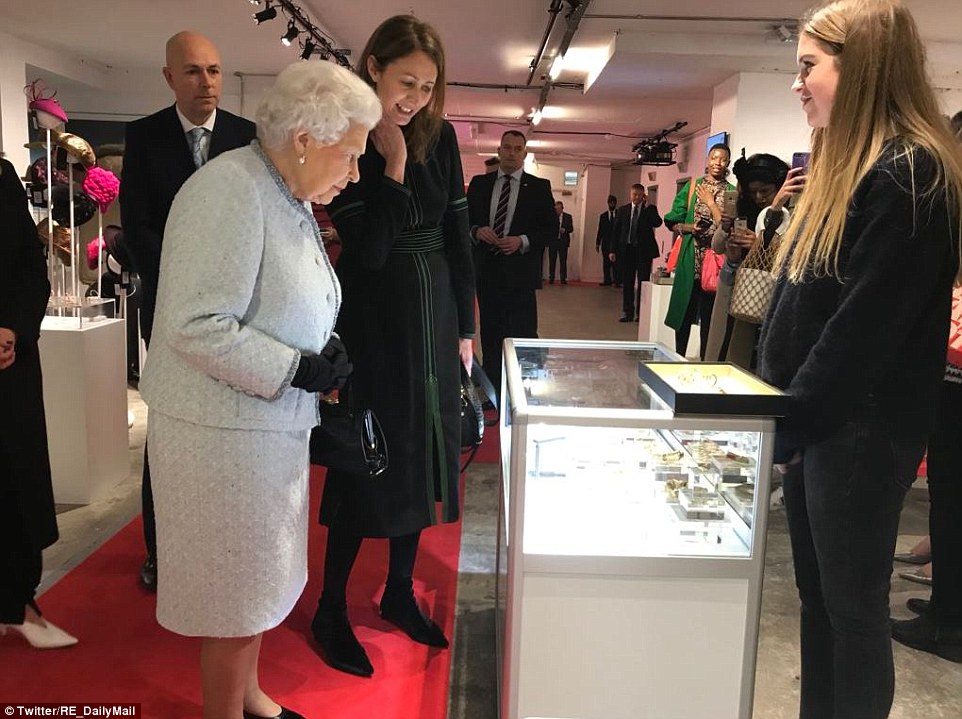 Taking a tour: Following the Queen’s arrival, she viewed a millinery exhibition curated by the legendary Stephen Jones and viewed some jewellery on display 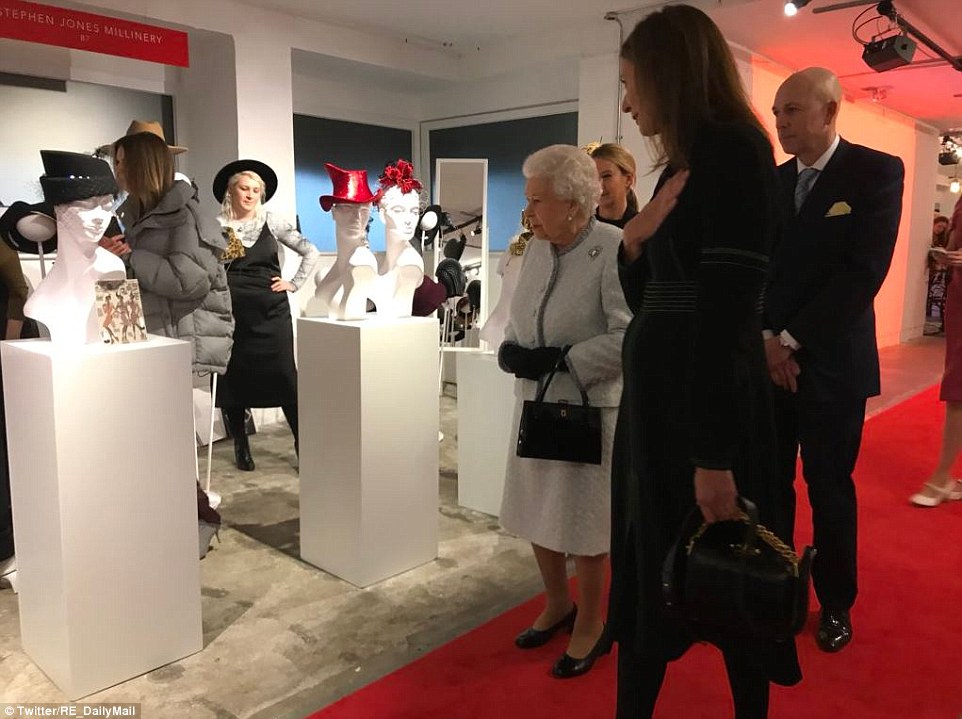 Debut: The Queen is set to take a place in the coveted FROW – front row – at London Fashion Week this afternoon, for the first time in her record-breaking reign

The Queen Elizabeth II Award is the brainchild of one of the Queen’s closest confidantes, Angela Kelly, Personal Advisor to Her Majesty (The Queen’s Wardrobe), who has been working on designing an award which The Queen wanted to give in recognition of emerging British fashion talent for the past two years.

She hopes it will provide continuing recognition of the cultural and trade role the British design and fashion industry has played, and continues to play, throughout Her Majesty’s reign.

The Queen was greeted upon arrival at London Fashion Week by Caroline Rush CBE, Chief Executive of the British Fashion Council (BFC). 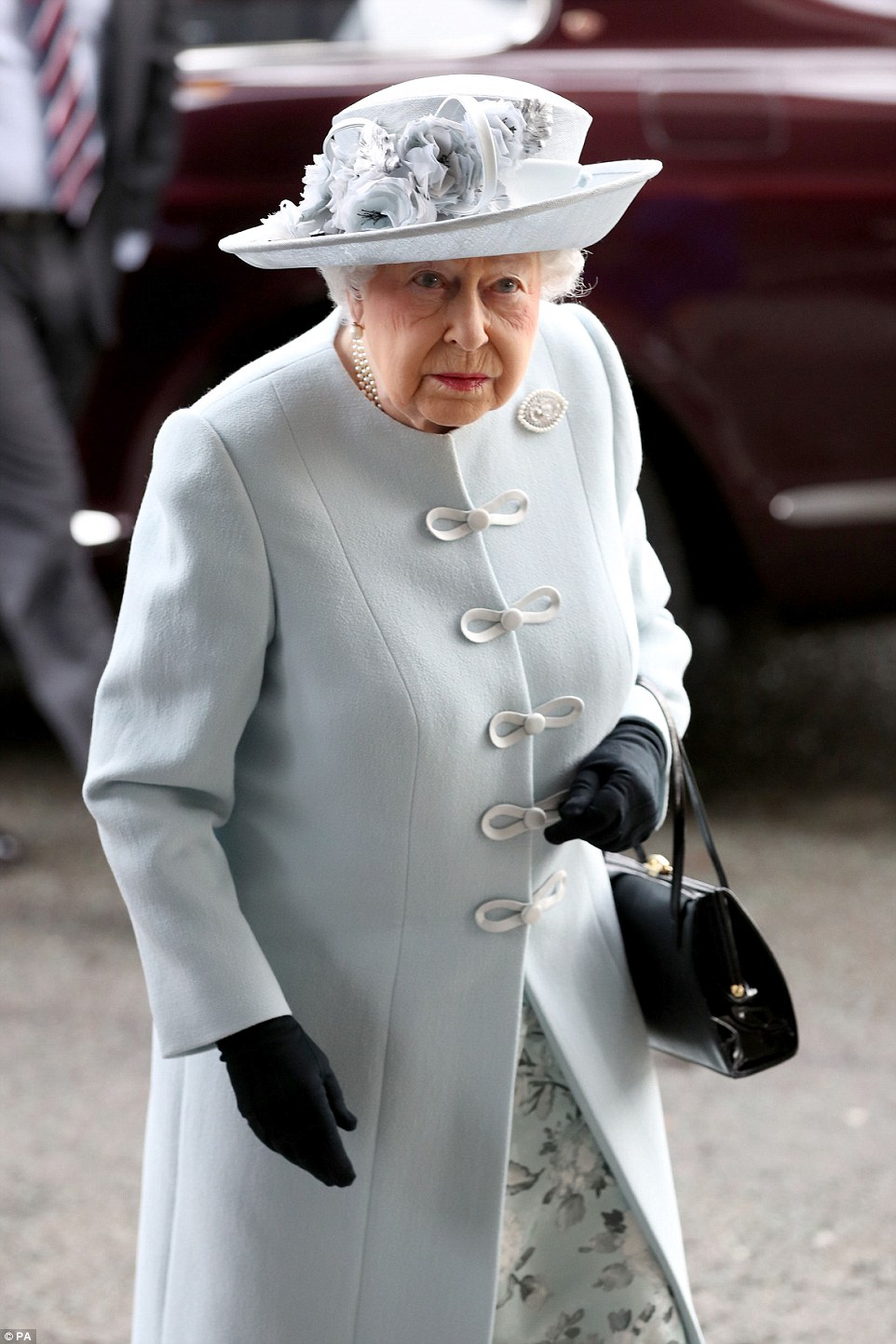 It is the monarch’s second engagement of the day after she visited the Royal College of Physicians in London, to mark the 500th anniversary of the body’s founding Charter

She will tour the showrooms to view display and meet designers, including the ‘New Gen’ group – a BFC initiative that supports emerging talent.

Finally she will view Richard Quinn’s runway show, from the front row , before presenting him with the inaugural Queen Elizabeth II Award for British Design.

Each year from now on a designer will be selected by the BFC, in collaboration with the Royal Household, to be presented with the award by a Member of the Royal Family.

The Award, designed by Angela Kelly, inspired by the Queen Elizabeth rose, has been hand-produced by Lucy Price at Bauhinia Studios in Birmingham’s famous jewellery quarter.