Queen Máxima and King Willem-Alexander of The Netherlands were back to royal duties today as they stepped out with their daughter Catharina-Amalia at The Hague.

The King and Queen have just returned from London where they attended Her late Majesty Queen Elizabeth II’s funeral in Westminster Abbey, and committal service in St George’s Chapel, Windsor on Monday.

But the Dutch royals proved their dedication to royal duties as they attended Budget Day, known as Prinsjesdag in Dutch, at The Hague, to mark the new government year.

King Willem-Alexander, Queen Máxima and Crown Princess Catharina-Amalia of The Netherlands attended The Hague this afternoon 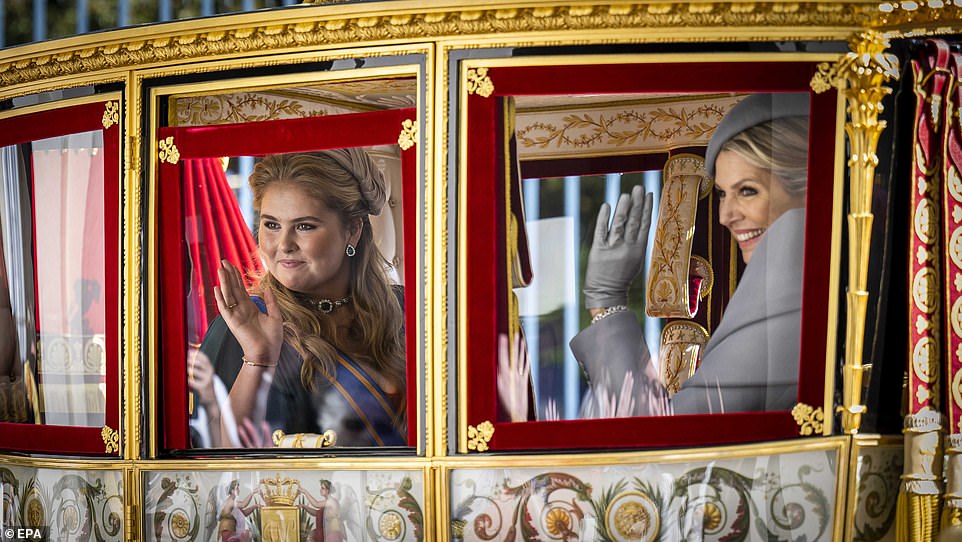 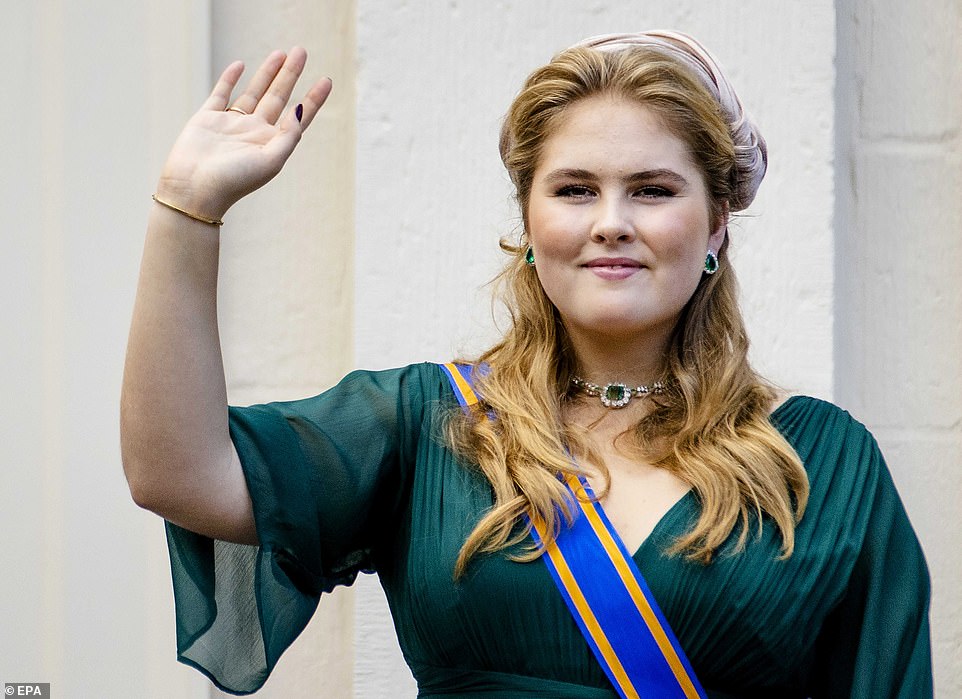 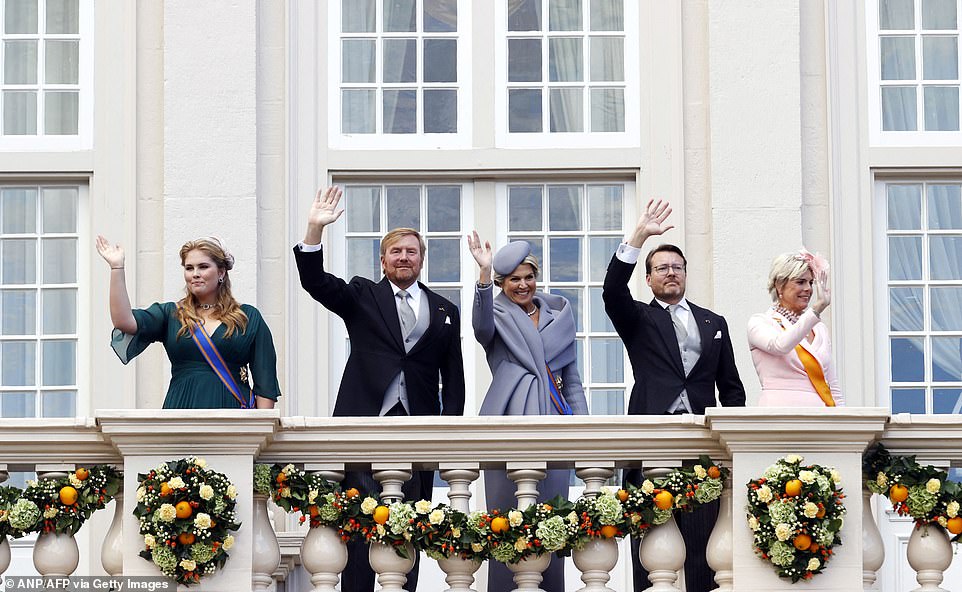 Princess Amalia, King Willem-Alexander, Queen Maxima, Prince Constantijn and Princess Laurentien wave on the balcony of the Noordeinde Palace in The Hague 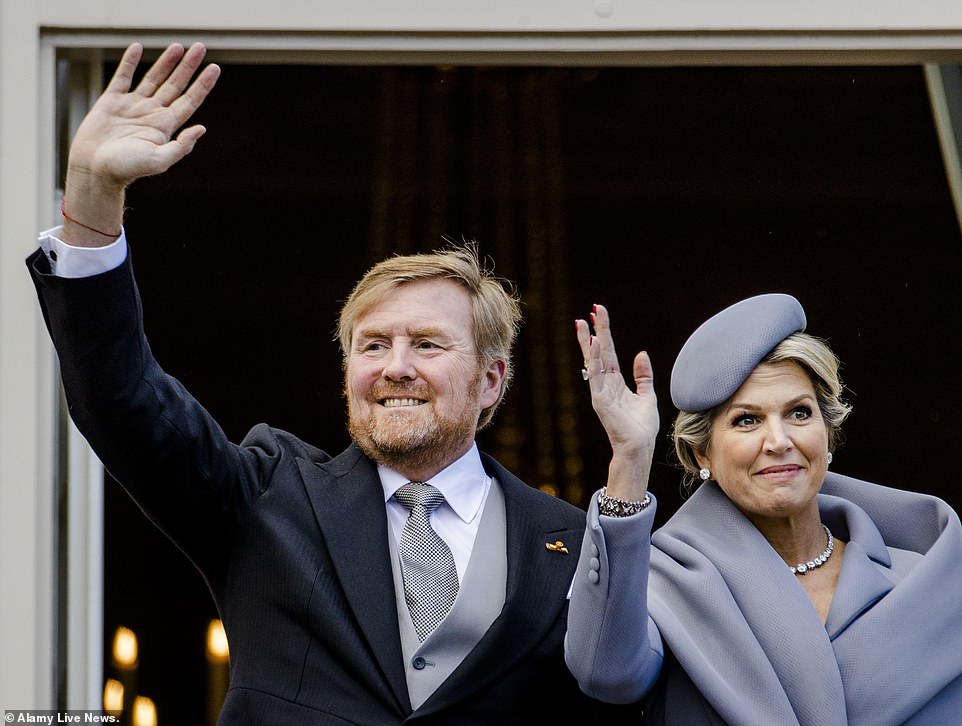 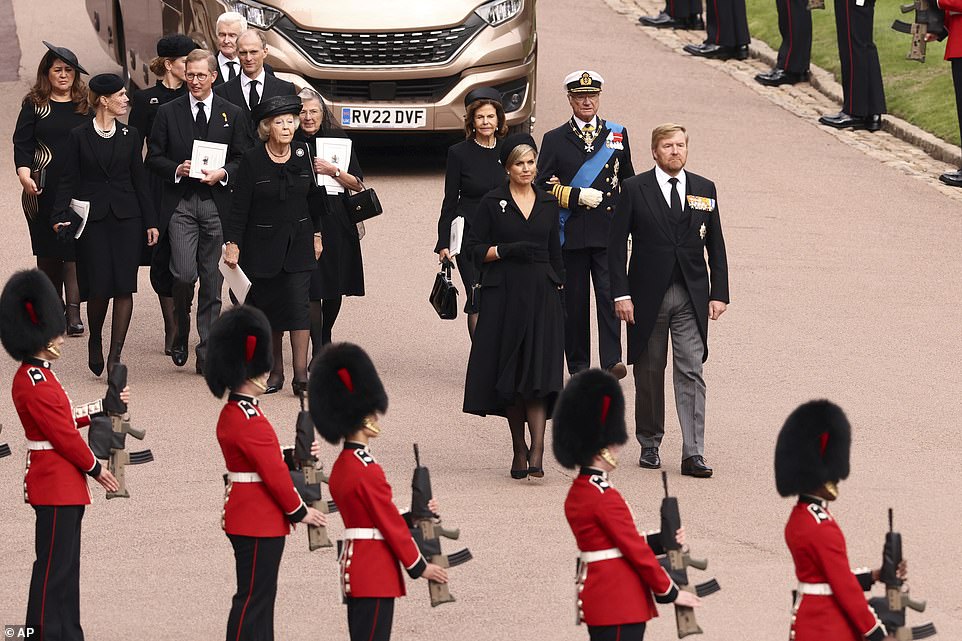 Yesterday, the couple joined European royals at the Queen’s state funeral. They attended a service at Westminster Abbey followed by the Committal Service at Windsor (pictured) 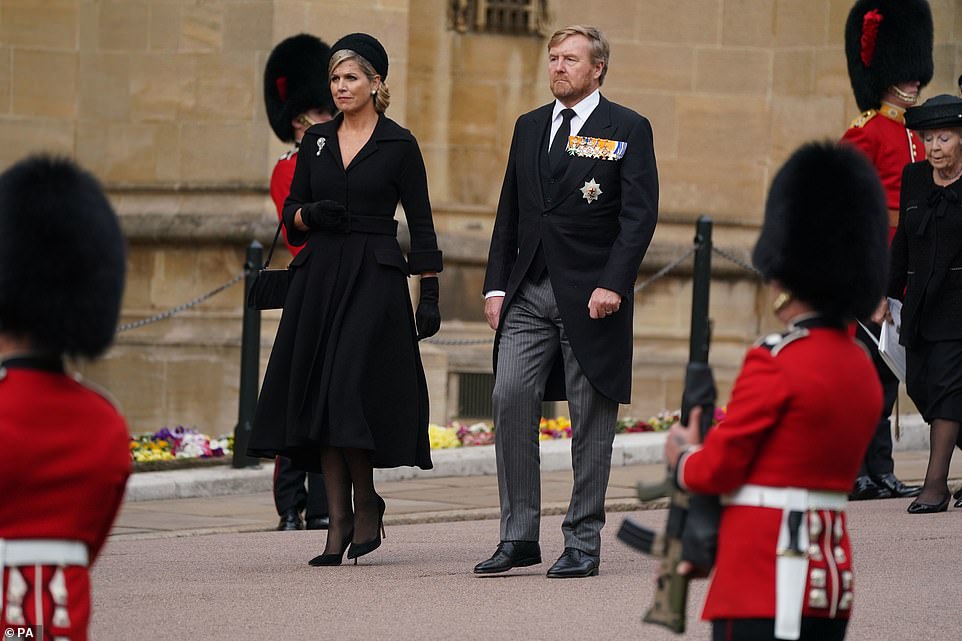 After looking solemn in black during her appearances in London at the ‘reception of the century’ at Buckingham Palace on Sunday and the state funeral on Monday, Queen Máxima, 51, looked professional and elegant in a grey wrap dress and matching hat.

She had her blonde locks pinned in a bun and accessorised with a diamond necklace and simple diamond earrings.

The King and Queen’s daughter, Crown Princess Catharina-Amalia, 18, looked radiant in a flowing emerald maxi dress, clinched at the waist.

The laid-back princess seemed to champion the high street in the gown, which appeared to be an £86 flowing number from ASOS.

Wearing her blonde tresses down, she accessorised with diamond and emerald earrings, a necklace and a ring, while carrying a gold embellished clutch bag.

Both mother and daughter also wore the Dutch royal sash and star, which is orange and blue to symbolise the union between the Houses of Orange and Nassau. 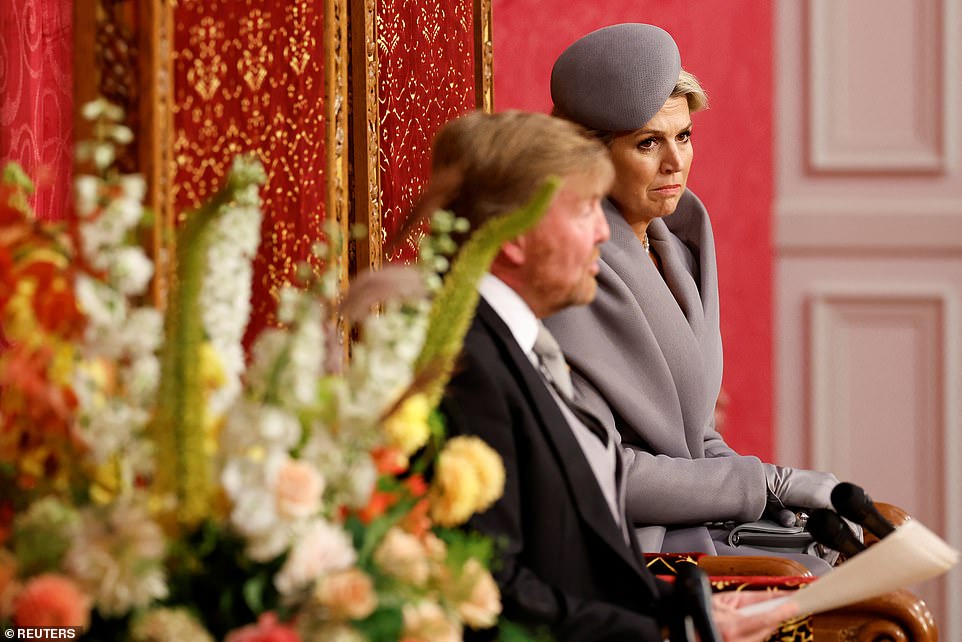 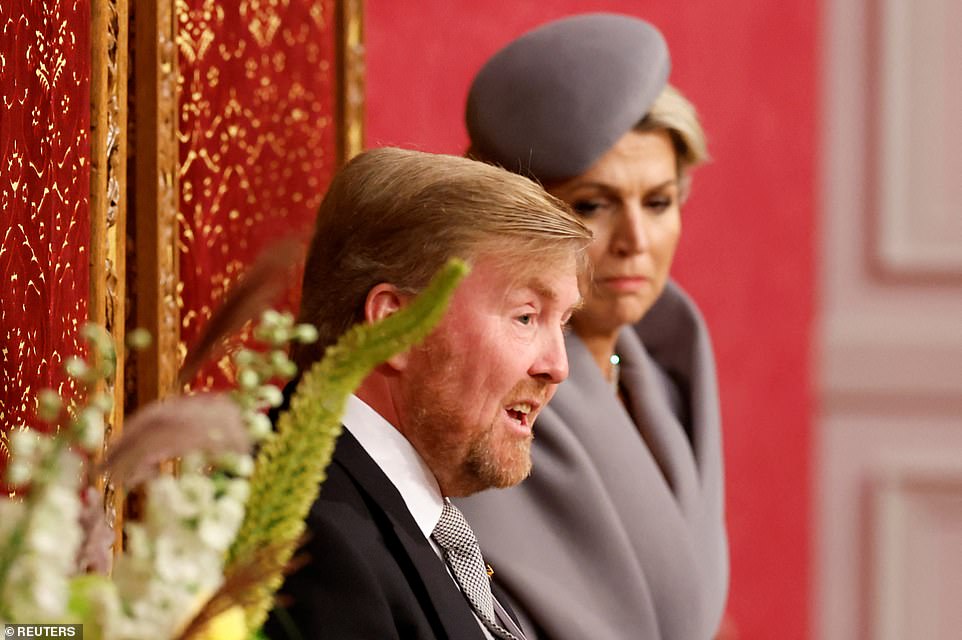 The Dutch royals were back to their duties today, just one day after mourning the loss of Queen Elizabeth II in London 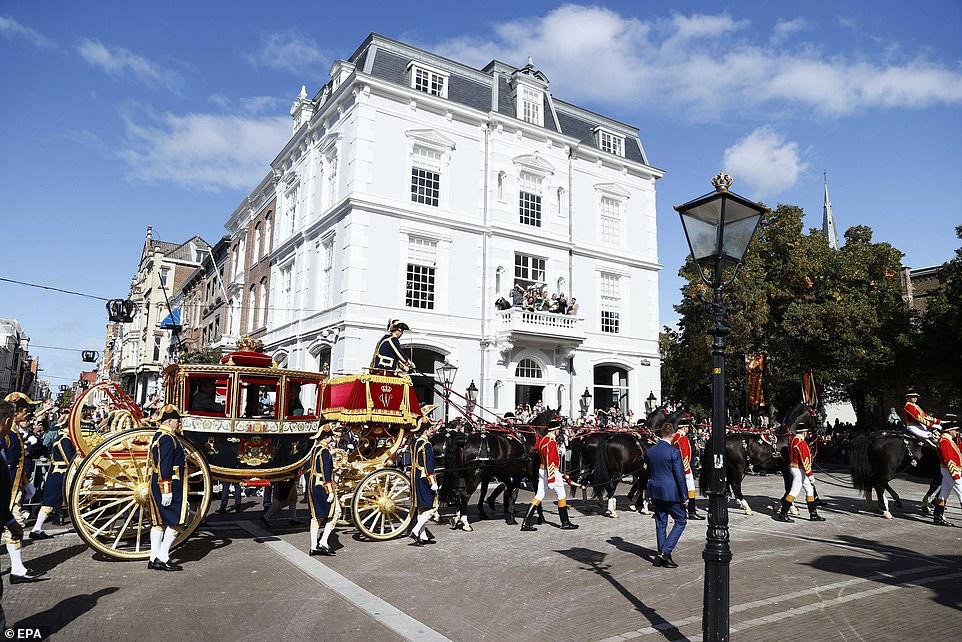 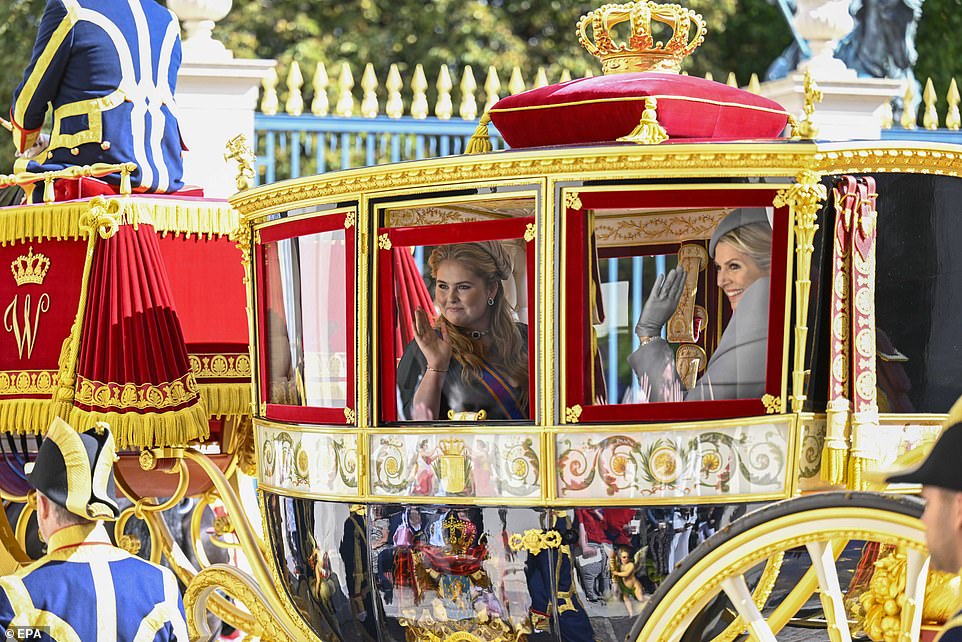 Just like her mother! Crown Princess Amalia, the heir to the throne, looked like a Queen-in-waiting as she beamed while waving at members of the public

The young princess and heir to the throne will be starting her degree at the University of Amsterdam soon – and the Dutch Royal Family announced in May she will live in student accommodation with her peers.

She will be studying politics, psychology, law and economics.

As part of Budget Day, King Willem-Alexander, 55, gives a speech from the throne in the Shouwburg. This year’s Budget Day will see people gathering in The Hague for the first time since 2019 after two years of coronavirus restrictions.

The royal family waved from a horse-drawn carriage as they took part in the royal procession from Noordeinde Palace to the Koninklijke Schouwburg. 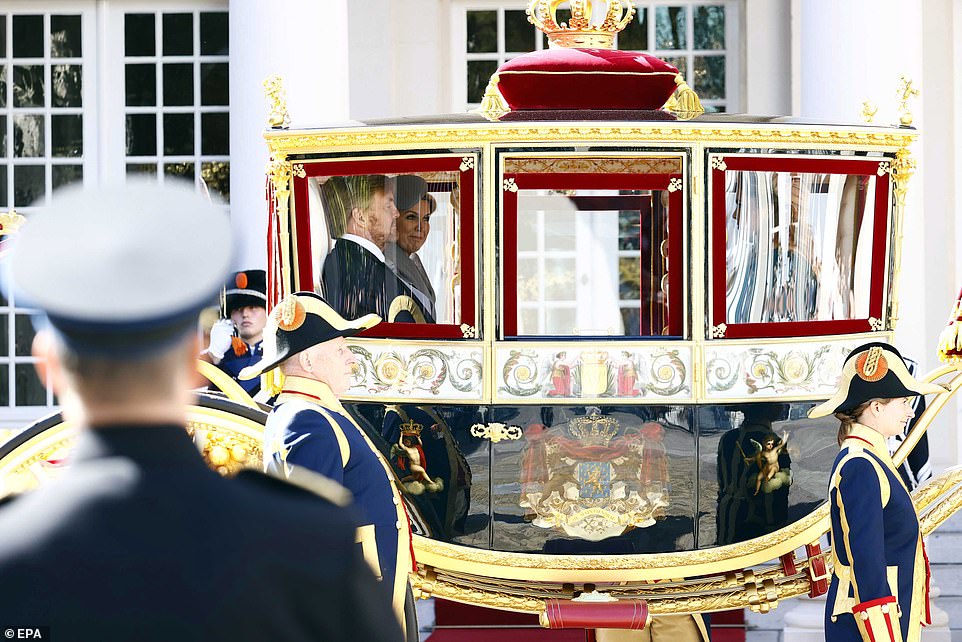 The Dutch royals attended the opening of the government, which takes place on the third Tuesday in September every year 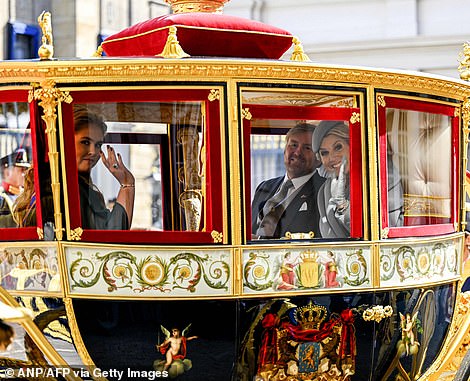 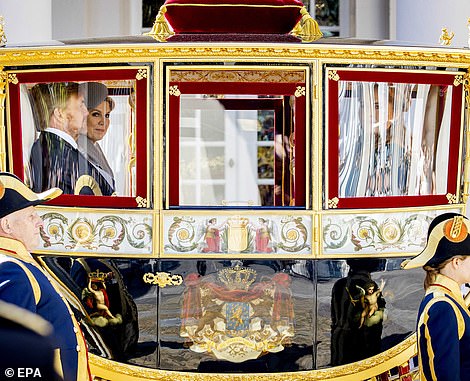 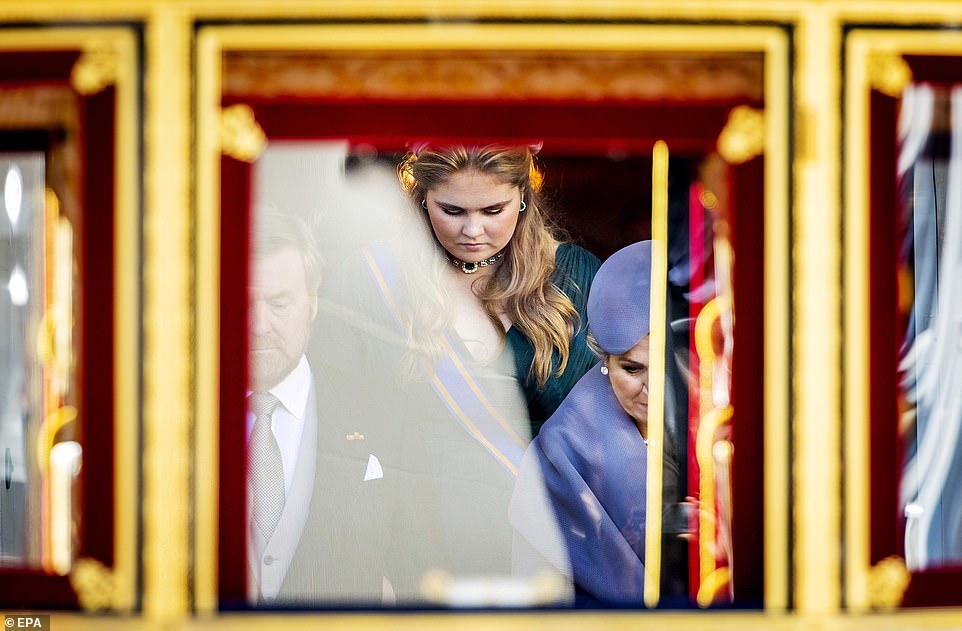 On Sunday night the Dutch royals arrived in London for the ‘reception of the century’ at Buckingham Palace, hosted by King Charles and Queen Consort Camilla, ahead of Queen Elizabeth II’s funeral on Monday.

The King and Queen, accompanied by Princess Beatrix, attended the state funeral followed by the committal service in Windsor.

Following the Queen’s death on 8 September at Balmoral Castle, King Willem-Alexander and Queen Máxima led the tributes from foreign royals to Her late Majesty.

Posting a tribute on their Instagram page, they sent their heartfelt condolences to King Charles and his family.

‘Steadfast and wise, she dedicated her long life to serving the British people. We feel a strong bond with the United Kingdom and its royal family, and we share their sorrow at this time.

‘We are very grateful for our countries’ close friendship, to which Queen Elizabeth made such an unforgettable contribution.’