Queen saddened by death of her beloved corgi called Whisper

Queen Elizabeth II with her pet corgis in 1969. She has been left deeply saddened by the death of Whisper

The Queen has been left deeply saddened by the death of a corgi she adopted after the dog’s owner died.

Twelve-year-old Whisper had become a royal favourite following the death earlier this year of Willow – the last corgi she reared herself.

She had taken in the dog in 2016 after its owner Bill Fenwick, a former Sandringham gamekeeper, died.

Mr Fenwick’s late wife Nancy was known as the ‘keeper of the Queen’s corgis’ and always looked after the royal pets when Her Majesty was away on tours.

Her offer to take in Whisper was seen as returning the favour. Over the last two years she had become especially close to Whisper who devotedly followed her from room to room throughout Buckingham Palace.

Although she still has two dogs, Candy and Vulcan, they are dorgis, dachshund and corgi crosses. They are also rather more familiar with the Queen’s routine.

‘Whisper was a friendly chap and followed her everywhere,’ says a source.

‘The Queen has quickly become very attached to the dog.’ The death of any of her corgis has always hit her hard and Whisper’s was no different. 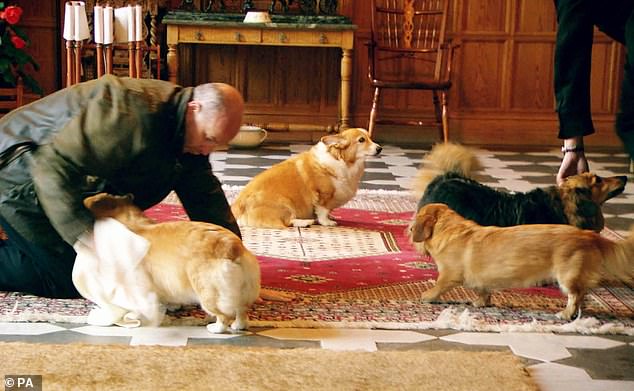 The Queen’s Corgis being dried after a walk in Balmoral from the Our Queen documentary, shown in 2013. Although Whisper had entered the family three years later, twelve-year-old Whisper had become a royal favourite 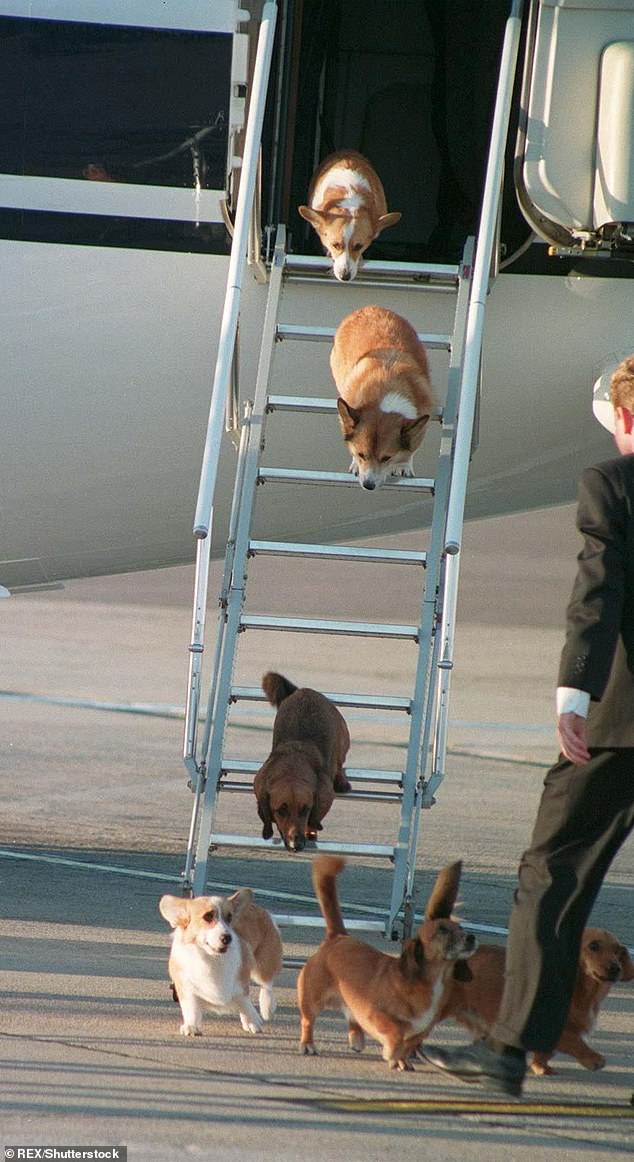 Corgis leave a plane after the Queen. Although she still has two dogs, Candy and Vulcan, they are dorgis, dachshund and corgi crosses. They are also rather more familiar with the Queen’s routine

It came as she was preparing to welcome the Dutch King Willem for the start of this week’s State visit.

Whisper is understood to have become ill some weeks ago but was well enough to travel back to Windsor from Balmoral at the end of the Queen’s summer break.

But alarmed by the dog’s worsening condition, vets were called in last week while the Queen was at Windsor Castle and it was there that Whisper died six days ago. It is not known what the cause of death was. But a number of corgis, including Willow, died from cancer-related illnesses.

The dog’s death brings to an end a personal connection for the Queen dating back to 1944 when she received Susan, her first Pembroke Corgi as an 18th birthday present.

All her subsequent corgis – apart from Whisper – can trace their lineage back to Susan, and the Queen became an expert on the breed.

Five years ago she took the decision to stop breeding them. Her concerns were twofold. 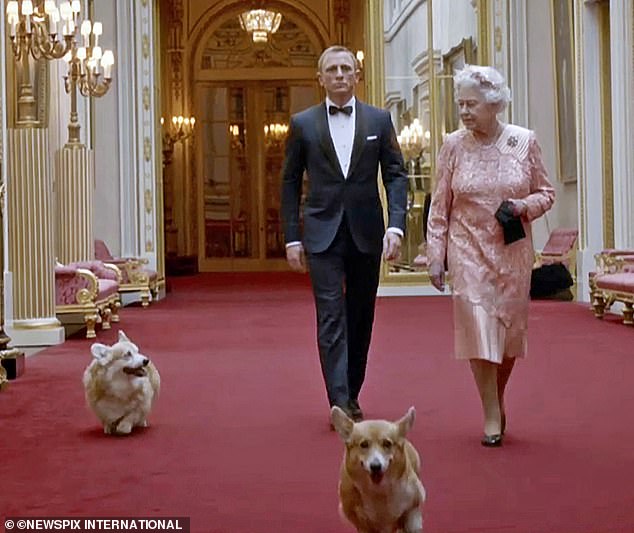 Daniel Craig, left, was filmed escorting The Queen and her corgis to the Opening Ceremony of the London 2012 Olympics 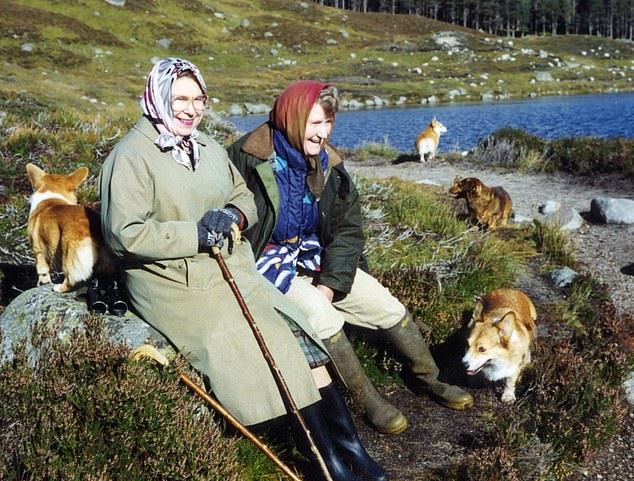 Corgis explore as Queen Elizabeth II, and Margaret Rhodes, the Queen’s cousin, go out for a walk in Balmoral, Scotland 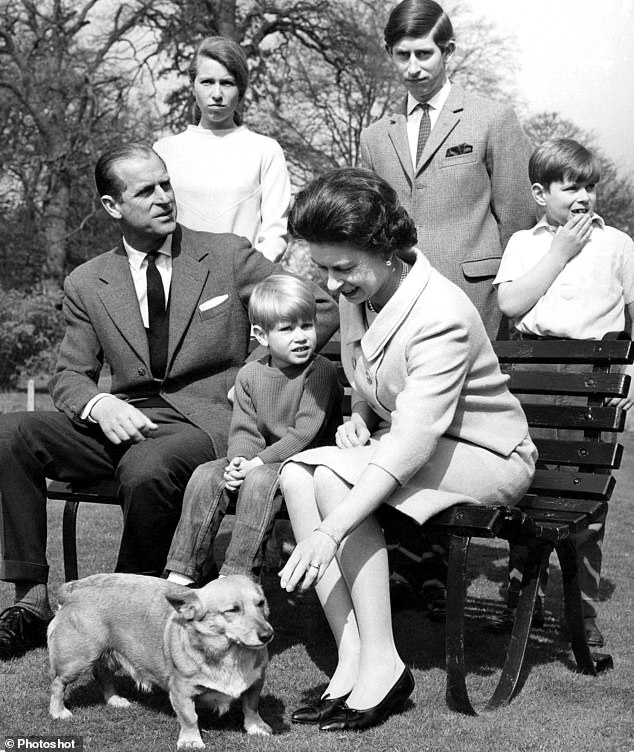 The Royal Family posing in the gardens at Frogmore, Windsor, in 1968, with a corgi. All her dogs, excluding Whisper, were descendants of her first Pembroke Corgi, which she got as an 18th birthday present

One, she feared tripping over excitable puppies, and two, she worried about who would look after them when she no longer could.

Nevertheless she was happy to take on Whisper precisely because the dog was mature and she had known her since she was a puppy.

‘The Fenwicks looked after their corgis like the Queen did so she knew there would be no problem if Whisper came to the Palace,’ says an aide. There was only one real change for Whisper – the spelling of her name.

‘When the dog was born it was named Wispa after the chocolate bar,’ an insider explains. ‘The Queen thought it was a bit obscure and preferred the proper spelling.’