Queen Victoria’s letter to poet Alfred Tennyson about heartbreak of losing child on sale for £3,000

A never-before-seen letter from a grieving Queen Victoria to poet Alfred Lord Tennyson about the loss of her son and husband will go on sale.

The mourning monarch wrote of her ‘terrible sorrows’ three days after her youngest and favourite son Prince Leopold was killed in an accident in 1884.

The two-page folded letter – which is in its original envelope – will be sold at Swann Auction Galleries, New York, on March 21 and is expected to sell for around £3,000.

Queen Victoria’s letter (pictured) to Poet Laureate Alfred Lord Tennyson is to be sold at Swann Auction Galleries in New York. The letter, dating from March 31, 1884, details Victoria’s grieving at the death of her son Prince Leopold three days earlier 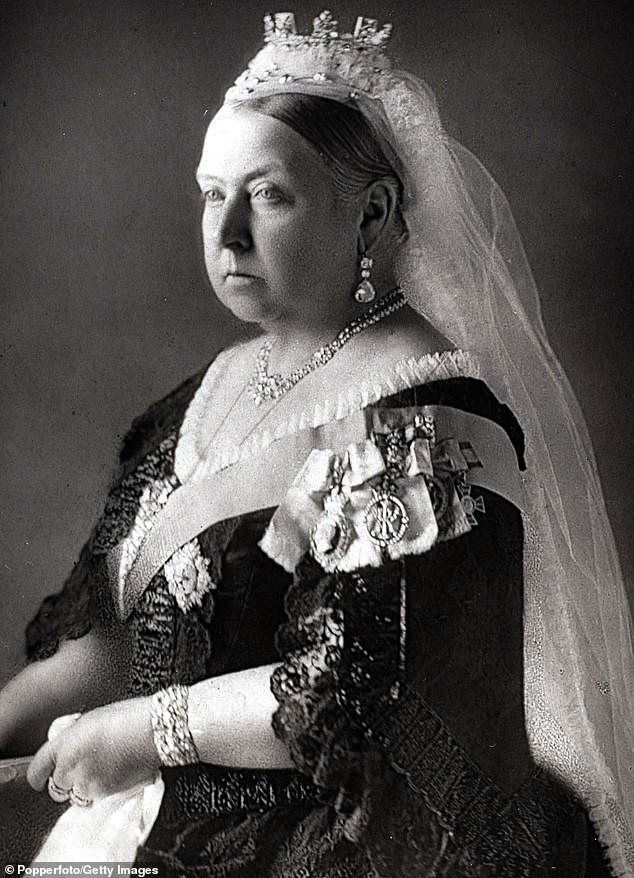 In the letter, written from Windsor Castle, she said: ‘But tho’ all happiness is at an end for me in this world, I am ready to fight on, praying that I may be supported in bearing my heavy cross. ‘All these terrible sorrows show us, however, truly and really that here is not our abiding home!’ 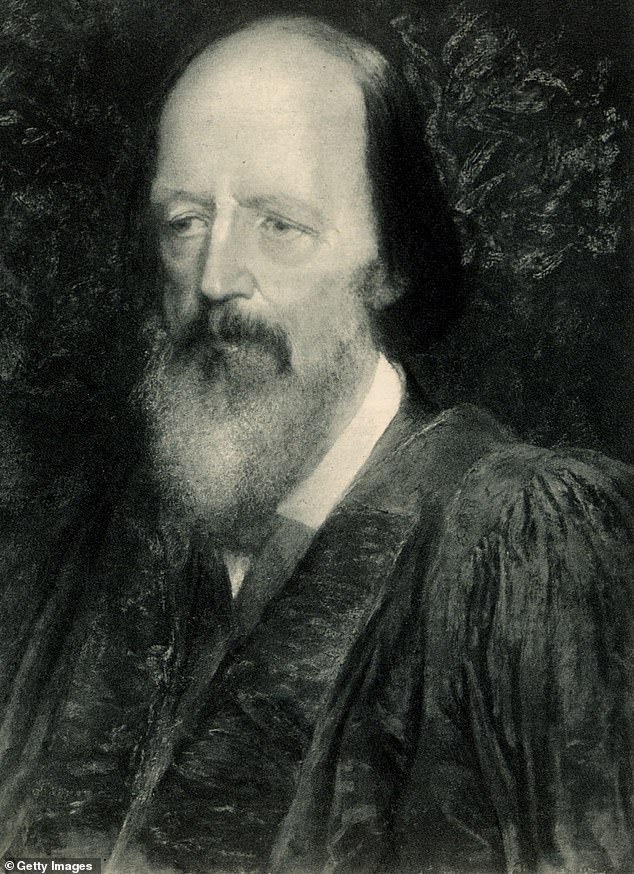 Alfred Lord Tennyson (pictured), who is best known for his poem The Charge Of The Light Brigade, was a close friend of Victoria and Prince Albert. It was Albert who lobbied for Tennyson to be made Poet Laureate, which was granted in 1850 after the death of William Wordsworth. Tennyson held the post until 1892 – the longest tenure of any laureate

In the letter to the Poet Laureate, written from Windsor Castle, Victoria wrote: ‘Almost all I needed most to lean on are taken from me!

‘But tho’ all happiness is at an end for me in this world, I am ready to fight on, praying that I may be supported in bearing my heavy cross.

‘All these terrible sorrows show us, however, truly and really that here is not our abiding home!’

On Leopold’s death and vowing to carry on as Queen, she added: ‘It is very hard to see such a young life, so full of talent, so gifted and so useful cut off so soon.

‘While I live, I shall devote myself to the good of my dear country, who has on all occasions of sorrow shown such sympathy with me.’ 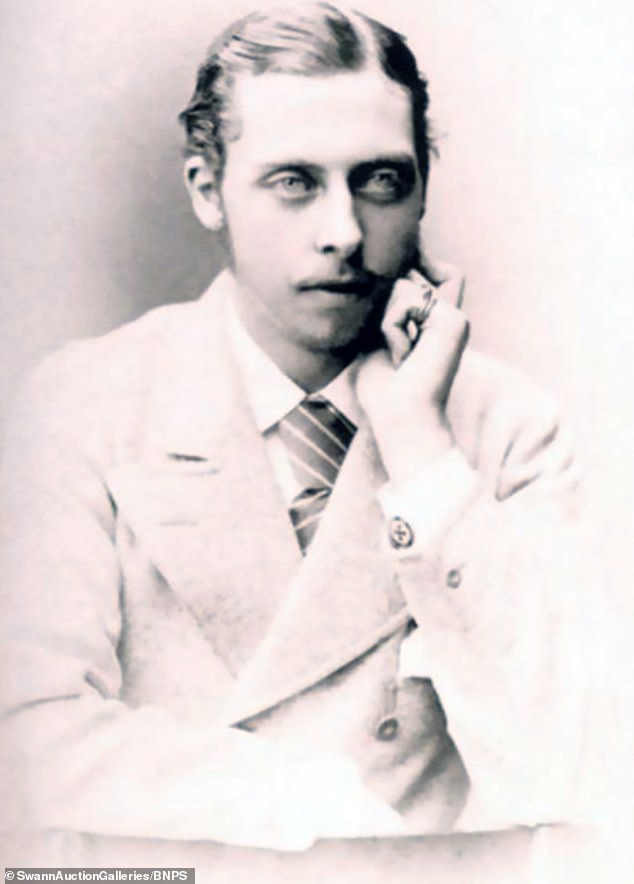 Prince Leopold (pictured) was Victoria’s youngest and favourite son. But he died on March 28, 1884, after he fell and hit his head. He had haemophilia and was sent to the south of France by doctors. His fall caused a cerebral haemorrhage and he died aged 30

Prince Albert is believed to have died of typhoid 23 years before Victoria penned the letter, but she was still grieving.

At that time she had taken solace in Tennyson’s 1850 poem In Memoriam – which he wrote after the death of his friend Arthur Henry Hallam.

Victoria and Albert were very close to Tennyson – who is best known for The Charge Of The Light Brigade – and Albert had lobbied for Tennyson to become Poet Laureate in 1850.

Victoria, who became known as the ‘Widow of Windsor’, met Tennyson in 1883 when she told him how helpful his work had been to her.

But less than a year later she turned to him as a shoulder to cry on following Leopold’s death.

The intellectual prince, who had been a mentee to Tennyson, suffered from haemophilia and in February 1884 he went to the south of France on doctor’s orders. 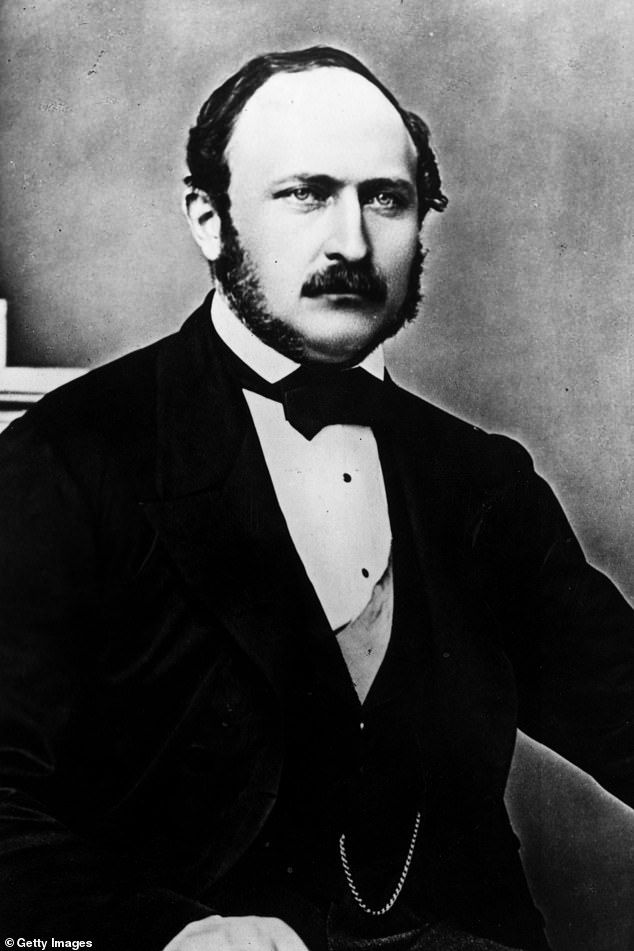 In the letter Victoria was still grieving over the death of her husband Prince Albert (pictured) despite it being 23 years later. It is believe the prince died of typhoid in 1861. To help get over the death, Victoria sought solace in Tennyson’s poem In Memoriam, which was published in 1850 and about the death of his friend Arthur Henry Hallam

A month later he fell, hit his head and died from cerebral haemorrhage aged 30.

She turned to Tennyson three days later in the letter, which is dated March 31, 1884.

Little is known about its origin, but in 1980 it was bought by an Oxfordshire book dealer.

It was then sold to a private collector based in Massachusetts who kept it for nearly 40 years.

Ivan MacQuisten, a consultant for Swann Auction Galleries, said: ‘This letter appearing now brings back into the public limelight one of the more interesting members of the Royal Family.

‘Because Leopold died so young and he was never going to be king, he disappeared from the public’s consciousness.

‘But he was very close to his mother and she called him her favourite son. He was particularly bright and this was something that Tennyson recognised in him.

‘Victoria was very taken with Tennyson. When Albert died everybody knows how bereft she was and she told Tennyson that ‘In Memoriam’ really comforted her.

‘You can see in her letter that, bearing in mind it was over 20 years after Albert’s death, she was still referring to her loss.

‘It was written three days after Leopold’s death and was probably in response to a letter of condolence sent from Tennyson.

‘The letter shows that grief was a massive part of her life but also she accepted her fate in life which was devoted to the god of her country.

‘The letter is completely new to me. I don’t pretend to be a scholar in this field but I have been in the industry for many years and I have not seen any mention of this letter before.’