Queensland and Tasmania joins WA in shutting their borders to Victoria

The Queensland government is shutting its border to Victoria after the state went into a seven-day lockdown due to a coronavirus outbreak.

The lockdown will begin at 11.59pm on Thursday after the state recorded 11 new cases linked to the City of Whittlesea outbreak overnight taking the total cases to 26.

The Sunshine state will join Western Australia and Tasmania, which also rushed to ban Victorians after Acting Victorian Premier James Merlino made the announcement on Thursday.

Queensland Premier Annastacia Palaszczuk says anyone who has been in Victoria since May 11 will be ordered into hotel quarantine on arrival from 1am on Friday.

‘We’ve been through this before, and I know that people understand that we have to take these measures on the advice … because we want to continue to keep Queenslanders safe,’ Ms Palaszczuk told reporters.

Ms Palaszczuk said police would be meeting flights at the state’s airports to check if people arriving have been in Victoria.

Anyone already in Queensland will be subject to the same lockdown provisions that Victorians are for the next seven days.

It’s the first time Queensland has shut the border to a domestic location since travel from Western Australia’s Perth and Peel regions was restricted on April 23.

‘We’ve all done this before, we know exactly what’s needed. It’s kept us safe before, and I’m sure this will keep us safe again,’ Chief Health Officer Jeannette Young said.

Meanwhile, Victoria was designated a ‘medium-risk’ jurisdiction under WA’s controlled border regime from 10am Perth time.

Travel will be blocked for anyone who has been in Victoria since May 16 unless they secure an exemption.

‘This is a concerning and a fast-developing situation, however the controls we have already put in place have mitigated the risk,’ Premier Mark McGowan told reporters.

People who have recently travelled to Victoria and need to return to WA will be required to self-quarantine for 14 days upon returning home.

Those who have already returned after being in Victoria since May 16 are required to get tested within 48 hours and self-quarantine until they return a negative result.

Previously they only had to get tested if they had been to a confirmed exposure site.

Mr McGowan said 531 people were due to fly to WA from Victoria on Thursday but the number was likely to drop as flights were cancelled and people adjusted their plans. 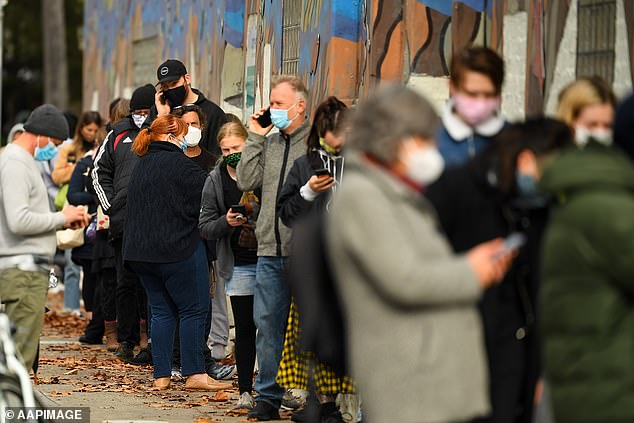 Victoria recorded 11 new cases on Thursday to take the outbreak to 26. Pictured is a queue at a testing clinic in Melbourne

He said the wide spread of the virus in Victoria was troubling.

‘The concerning pattern of this outbreak is exactly the kind of situation we had in mind when making decisions to lock down WA in the past,’ he said.

Similar restrictions were imposed in Tasmania, with all of Victoria declared a ‘high-risk’ location from 2pm.

‘This means that after 2pm you can’t travel to Tasmania if you’ve spent time in Victoria in the previous 14 days, unless you are approved as an essential traveller,’ Tasmanian Premier Peter Gutwein told reporters.

Tasmanian residents in Victoria can apply for essential traveller status if they want to return home.

However, they must quarantine for 14 days upon arrival at a ‘suitable premises’ or in a government-run hotel at their own expense.

Mr Gutwein said he expected the travel ban to mirror the length of the Victorian lockdown.

‘We will provide updates as we work our way through this. One would hope that over the seven days they can get on top of this,’ he said.

Anyone who has been in other areas of Victoria since May 6 must monitor for COVID-19 symptoms, Mr Gutwein said.

Extra workers have been deployed to staff Tasmania’s coronavirus hotline due to a spike in calls.

Victorian authorities have identified more than 10,000 primary and secondary contacts linked to the Melbourne outbreak.

Anyone in Tasmania who has been at designated high-risk areas and premises in Victoria must self-isolate immediately. 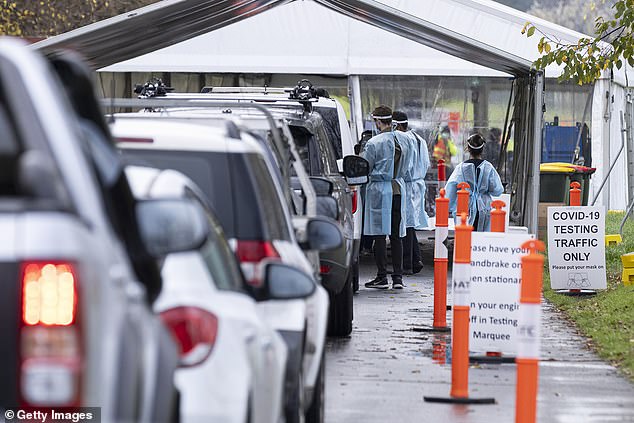 Anyone who has been in Victoria since May 11 will be ordered into hotel quarantine on arrival from 1am on Friday. Pictured is the drive-through testing clinic in Melbourne

South Australia, which imposed a ban on Greater Melbourne residents from 6pm on Wednesday, is yet to ban other Victorians, while New South Wales Premier Gladys Berejiklian said there was no plan to close the border.

However, Ms Berejiklian has urged Victorians thinking of fleeing north to escape another COVID-19 lockdown to be considerate and stay put.

Authorities are already worried the virus may have spread into the state, after several teams from a NSW sporting club visited one of the exposure sites.

NSW residents are being urged to avoid travel to Victoria, and anyone entering NSW from the southern state after 4pm on Thursday will still be required to abide by the lockdown rules.

Do you blame the Andrews Government or Morrison Government for Victoria’s latest Covid outbreak and lockdown?

Ms Berejiklian said NSW had no intention of closing the border to Victorians at this stage, despite every other state doing so.

However the premier urged Victorians not to take advantage of NSW’s goodwill by rushing to cross the border before the 4pm deadline.

‘There are 55 crossings of the border and we just ask everybody to do the right thing,’ she told Nine’s Today Show on Thursday.

‘Anybody who is intending to get in their car and try and beat the lockdown, please think about your fellow citizens.

‘We’ve relied on the goodwill of our citizens during the entire pandemic. Let’s not give up now.’

The premier said once the Victorian lockdown – and its travel limitations – comes into effect at midnight, the pressure on NSW would ease.

Anyone who does enter NSW from Victoria after 4pm must remain at home for seven days, and is only permitted to leave for limited reasons.

However, NSW residents in border communities will only be required to abide by the rules if they go outside the border region from 4pm.

The premier said the outbreak served as a reminder of the urgent need for NSW residents to roll up their sleeves and get vaccinated.

‘What’s happening in Victoria is a wake-up call. We don’t know what’s around the corner,’ she said.