Premier Annastacia Palaszczuk announced Queensland had 59 new cases of Covid as the Omicron variant takes hold in the state.

‘I expect to see more and more cases coming up into Christmas and over New Year, but we are well prepared for this,’ Ms Palaszczuk said.

The latest figure is an increase on the 42 Covid-19 cases recorded in Queensland yesterday, which was double the number recorded just 48 hours earlier.

Queensland now had 89.6 per cent of eligible people with a first dose of a Covid vaccine, and 84.51 percent fully vaccinated.

‘We’ve had 43 confirmed Omicron cases in Queensland so far and of those tested yesterday, there were 13 Omicron cases and eight Delta cases,’ he said.

Yesterday he was forced to revise his prediction that Omicron would be the dominant strain in weeks, saying that could happen ‘in days’ after 21 of the most recent 25 positive cases were found to have the more new variant.

‘This is happening very rapidly, again even more rapidly than we originally predicted, we thought that might take weeks, it looks like if this trend continues it will be dominant within days,’ he said.

He said the fact the isolated Mount Isa township was now affected indicated the virus’ spread.

‘It is likely most Queenslanders will be potentially exposed to this virus in the coming weeks.

‘If this rate continues, we will see significant numbers in January as predicted.’

Yesterday Dr Gerrard said no one was in intensive care, with only one of the 42 new cases showing symptoms. He said the ‘moderately unwell and breathless’ woman was unvaccinated.

Dr Gerrard said the state government was changing the way it dealt with Covid cases.

‘Previously we have been admitting all patients with Covid-19 to hospitals in Queensland, mostly for infection-control purposes,’ he said.

‘We are moving away from that model and we are clearing beds to allow capacity in the coming weeks, should we require it.’ 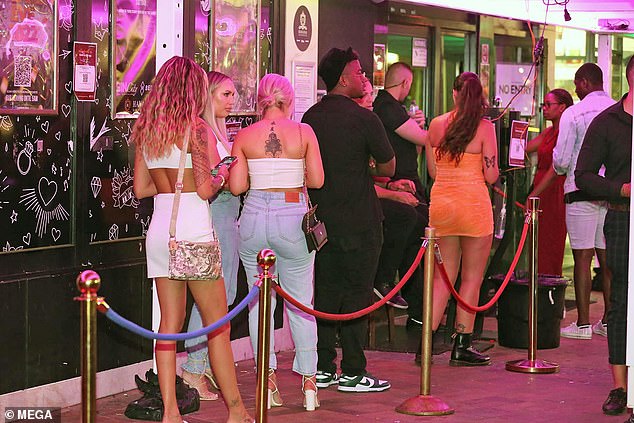 As of last Friday, unvaccinated people are banned from attending most Queensland venues, including cafes, restaurants, nightclubs, stadiums and theme parks. Pictured: People out in Surfers Paradise present their vaccination status at a nightclub

As of last Friday, unvaccinated people are banned from attending most Queensland venues, including cafes, restaurants, nightclubs, stadiums and theme parks.

On Monday the Queensland government also announced a $200 million funding injection for Queensland hospitals to cope with increasing Covid 19 cases and the resulting added pressures on the health system.