A man and a woman have been charged after they allegedly stole a car from a dealership before ramming into police cars in their getaway attempt.

Police received information about a Holden Colorado utility that had allegedly been stolen from a dealership on August 5 driving near the Queensland/NSW border at 2pm on Saturday.

Officers found the vehicle and started a police chase but called it off on safety grounds.

Fifteen minutes later the car was found in an underground car park of a block of units in Tweed Heads in northern New South Wales, after crossing the heavily-policed border from Queensland.

Two police cars parked in the driveway to block the exit, while a male senior constable approached the vehicle.

The driver of the car then allegedly drove at the constable and slammed into one of the police cars before then reversing and crashing into the other.

None of the officers were injured but both cars were damaged.

The Holden was allegedly found later without anyone inside and a search began.

An 18-year-old woman was arrested at 6.30pm on Saturday and charged with ‘being carried in a conveyance taken without consent of the owner’.

At 11pm a 20-year-old man from Mackay was arrested at a hospital and taken to Tweed Heads police station.

He was charged with an array of offences – including driving while disqualified, not stopping for police and using a weapon to prevent arrest.

The pair were refused bail to appear in Lismore Bail Court on Monday. 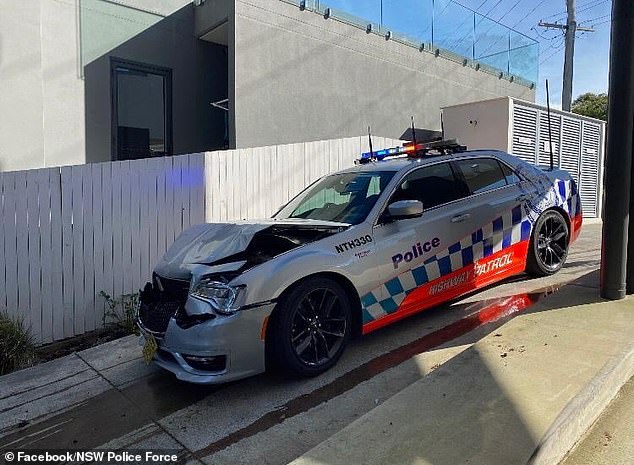