A Queensland city is under threat as a swelling river threatens to break its banks amid flooding rains that have already inundated several towns in the state – and caused a woman to give birth on a sports field.

The Mary River at Gympie is expected to reach a peak of 15 metres on Saturday afternoon, while the nearby Bruce Highway was closed on Saturday morning.

The Bureau of Meteorology has warned heavy rainfall will continue to fall over Gympie, Maroochydore, and Bundaberg throughout Saturday, though conditions are expected to ease over Brisbane and Gladstone. 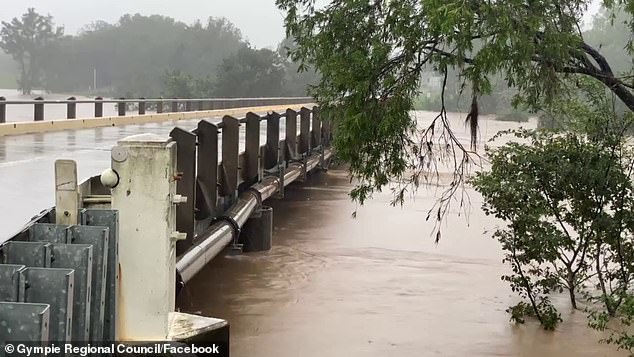 Pictured: A bridge over the Mary River near Gympie is just metres away from going under

Warnings have also been issued for low-lying towns in the southeast of the state, as pictures emerged yesterday of Laidley in the Lockyer Valley with its main street submerged. Areas such as Grantham are also experiencing inundation, with eight evacuation centres opened in the area.

The coastal town of Agnes Water in the Gladstone area was cut off on Friday night, with reports a woman was forced to give birth on a sports field after being evacuating from her home.

The woman gave birth to a healthy girl just before a rescue helicopter arrived to a rescue the parents.

Gympie mayor Glen Hartwig told ABC on Saturday that the town is now effectively cut off from the north and the south.

‘There is no chance that you will make it through Gympie.

‘I don’t know what words to the businesses that would ease their pain. This is the third [weather] event for our region in the last four-and-a-half months.

‘The last event had a significant financial impact. I don’t know what to say.’ 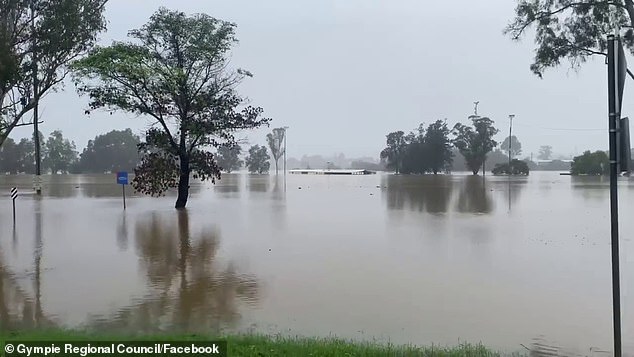 Floodwaters threaten the main street of Gympie (Albert Park between the river and Monland Street) as the river continues to rise, reaching 14metres overnight 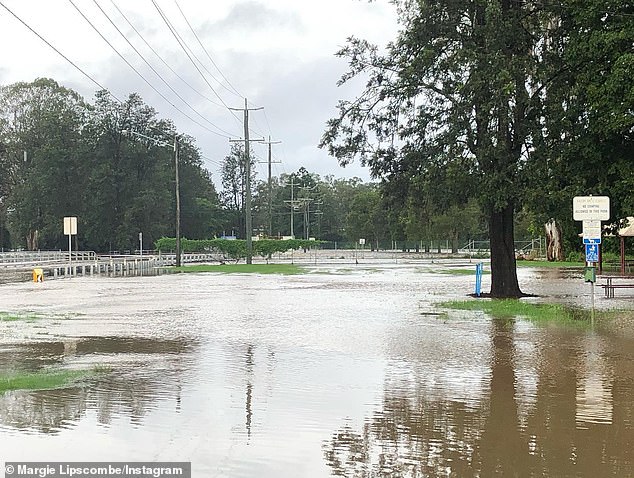 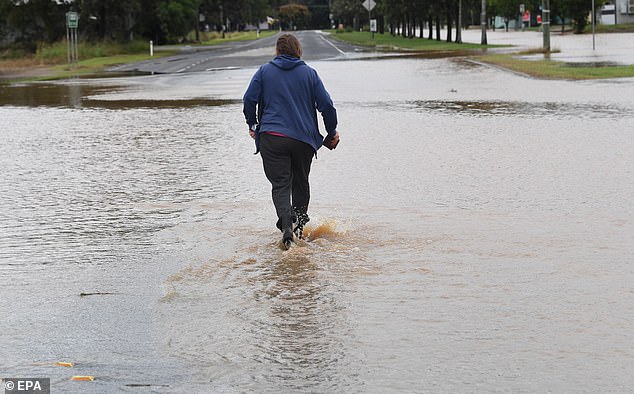 Pictured: A woman walks through the floodwaters of Grantham on Thursday. The waters have since risen further, cutting many nearby towns off from each other 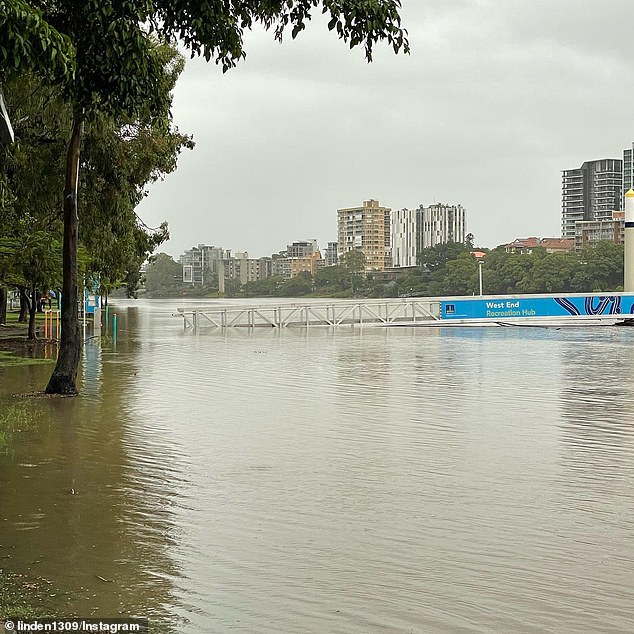 Queenslanders have been warned to expect heavy falls and flash flooding into the weekend with widespread rain to persist across the southeast and central coast.

Intense rain from a damaging low-pressure trough drenched the southeast on Friday with some falls of 160mm in six hours.

Residents were forced to evacuate as flooding hit areas around Laidley, Gatton and Grantham in the Lockyer Valley, west of Brisbane, to the south around Beaudesert and in Warwick, Cecil Plains, Millerman and Killarney on the Southern Downs.

About 300 homes were impacted in Laidley where the Lockyer River surged through the town’s main street. 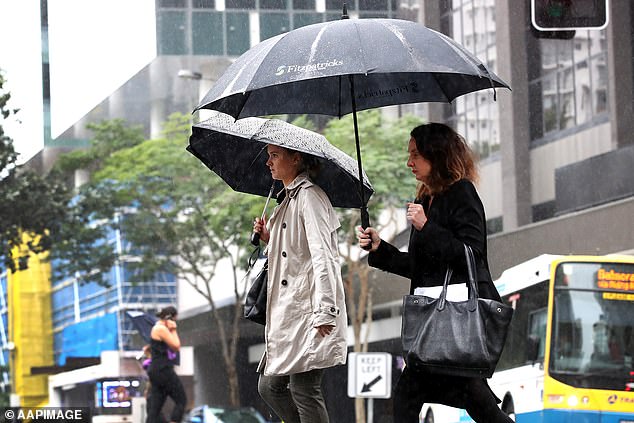 Pictured: Brisbanites are weathering the drizzle from the low-pressure system as it passes slowly over the city 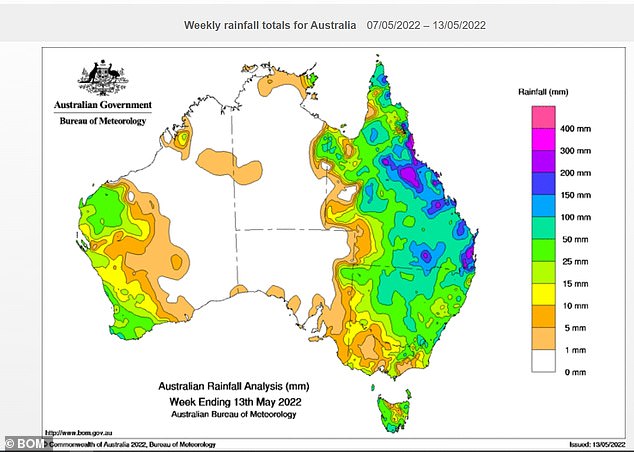 Here for the weekend: The rain is expected to stick around over Saturday and ease over next week as the 3000 kilometre long moisture system passes 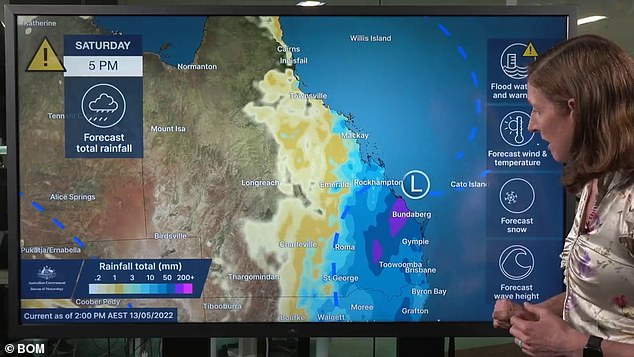 Major flood warnings are in place for the Condamine, Logan and Bremer rivers and Warrill, Laidley and Lockyer creeks.

The border town of Goondiwindi is also bracing for potential flooding after heavy rainfall across the border rivers catchment.

More than 700 roads were cut off or affected by floodwaters on Friday including the Bruce Highway near Gin Gin, with Queensland Fire and Emergency Services conducting 20 flood rescues in 24 hours.

Premier Annastacia Palaszczuk said that while the rain is not as intense as downpours that caused catastrophic floods in February, the system was expected to linger into Saturday. 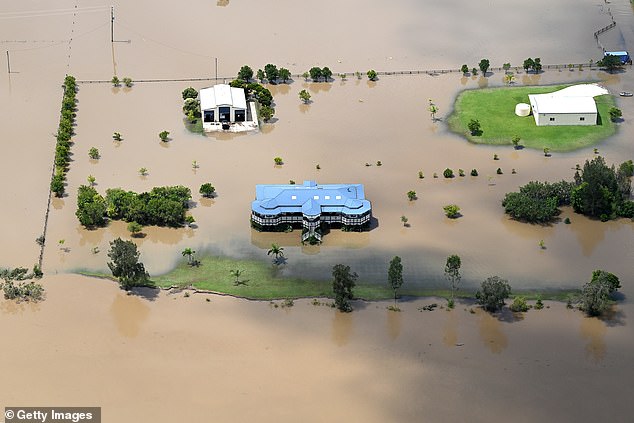 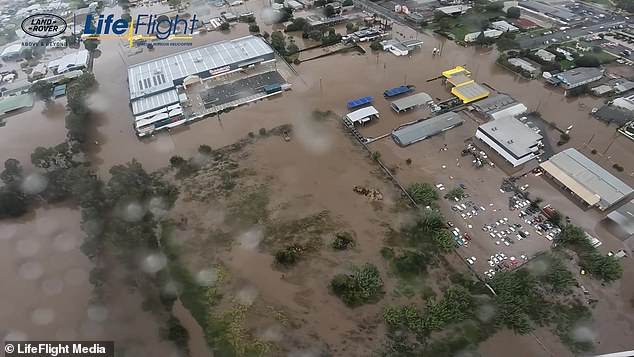 ‘The key thing is to be listening to the alerts and we’ll be keeping everybody updated as much as possible.’

‘We have lost far too many lives on our roads this year and in previous events,’ Mr Gollschewski said.

A powerful easterly swell and strong onshore winds have whipped up four-metre waves with the BOM warning of dangerous surf conditions and possible coastal erosion between Fraser Island and the NSW border.

The unseasonal deluge is Queensland’s sixth deadly flood since December, which scientists have put down to a second La Nina weather pattern in two years.