Outrage at Annastacia Palaszczuk’s tone-deaf posts from Tokyo calling on crowds to gather and celebrate Brisbane’s Olympics bid – despite 130,000 Aussies slamming her trip

Annastacia Palaszczuk has been slammed by frustrated Australians stuck in lockdown for encouraging Brisbane residents to crowd in the city to celebrate Queensland’s Olympic bid despite Covid restrictions.

From Tokyo, the Queensland Premier sent out a call to celebrate the International Olympic Committee’s decision on who will host the 2032 summer games.

Her trip to Japan was already controversial with more than 132,000 Australians signing a change.org petition condemning her hypocrisy after she campaigned to halve the number of people allowed back into the country.

Now, Ms Palaszczuk has faced more criticism for encouraging Queenslanders to gather on Wednesday night for a fireworks display to celebrate the likelihood of Brisbane winning its Olympics bid.

This is despite a more contagious Delta strain of Covid plunging Sydney, Melbourne and now Adelaide into extended lockdowns which ban home visits and non-essential shops from trading.

‘Brisbane’s skyline is ready to light up on Wednesday night as the International Olympics Committee is set to hand down its historic 2032 Games decision,’ she said on Facebook.

‘Fireworks are ready to be set off from river barges and CBD buildings in the event Brisbane secures the Olympics.

Several people questioned the wisdom of encouraging crowds as the Indian Delta strain of Covid keeps 14million people in Sydney, Melbourne and Adelaide in lockdown.

‘Middle of a pandemic when QLD is so far escaping the worst of it, then our MP thinks gathering on mass is a good idea. Lockdown imminent,’ one woman said. 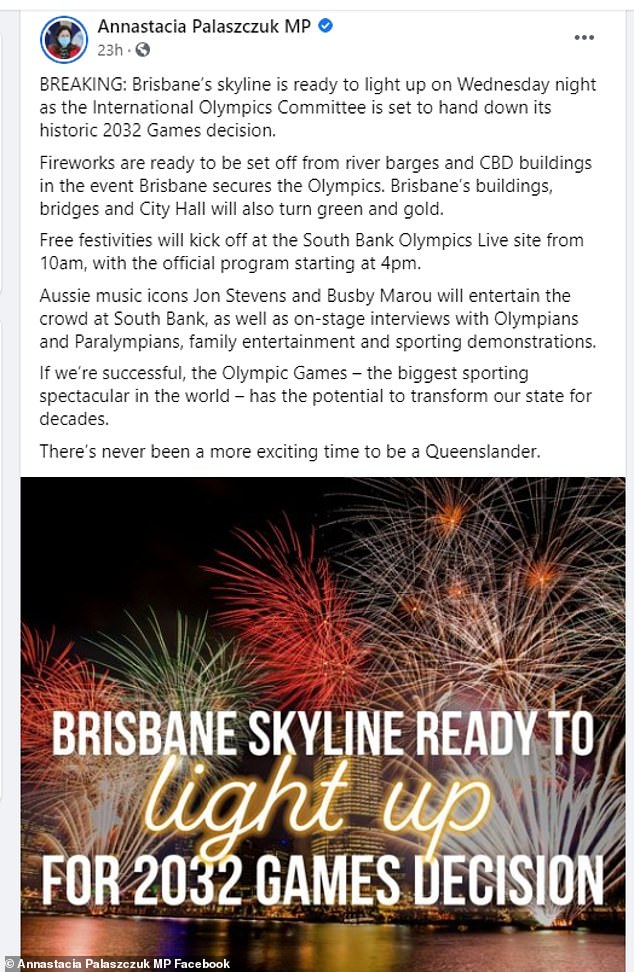 From Tokyo, the Queensland Premier sent out a call to celebrate the International Olympic Committee’s decision on who will host the 2032 summer games

Another woman asked about crowd numbers giving Queensland has a cap of 100 people in outdoor areas.

‘So is this outdoor public gathering capped at 30?’

With Australians banned from travelling overseas for a holiday, or in many cases a business trip, until at least mid-2022, the petition was launched after Ms Palaszczuk used the July 3 National Cabinet to campaign to halve the number of citizens and permanent residents allowed back into the country, to 3,035 from 6,070.

Despite more than 34,000 Australians being stranded overseas, the Queensland Premier will be allowed to return home straight away and quarantine at a hotel for 14 days.

The petition unsuccessfully called on Australian Border Force to block Ms Palaszczuk from being able to leave Australia. 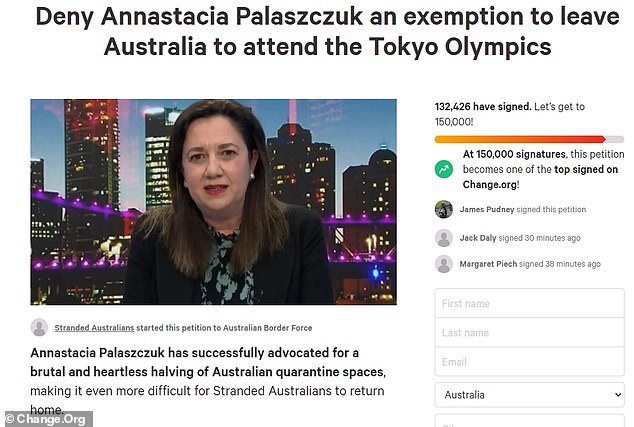 Her trip to Japan was already controversial with more than 132,000 Australians signing a change.org petition condemning her hypocrisy after she campaigned to halve the number of people allowed back into the country

‘The people of Australia believe the Queensland government should lead by example,’ the petition said.

‘We hereby petition for Annastacia Palaszczuk to be DENIED the right to leave Australia at this time until she increases hotel quarantine capacity to such an extent that she will not take up a space that could have gone to a stranded Australian.’

In Queensland, a woman in her 20s, has tested positive to Covid despite being fully vaccinated.

She flew into the Sunshine Coast from Melbourne on July 13.

The woman’s case is unrelated to any of the existing outbreaks – with authorities confirming she had been infectious in the community for three days.